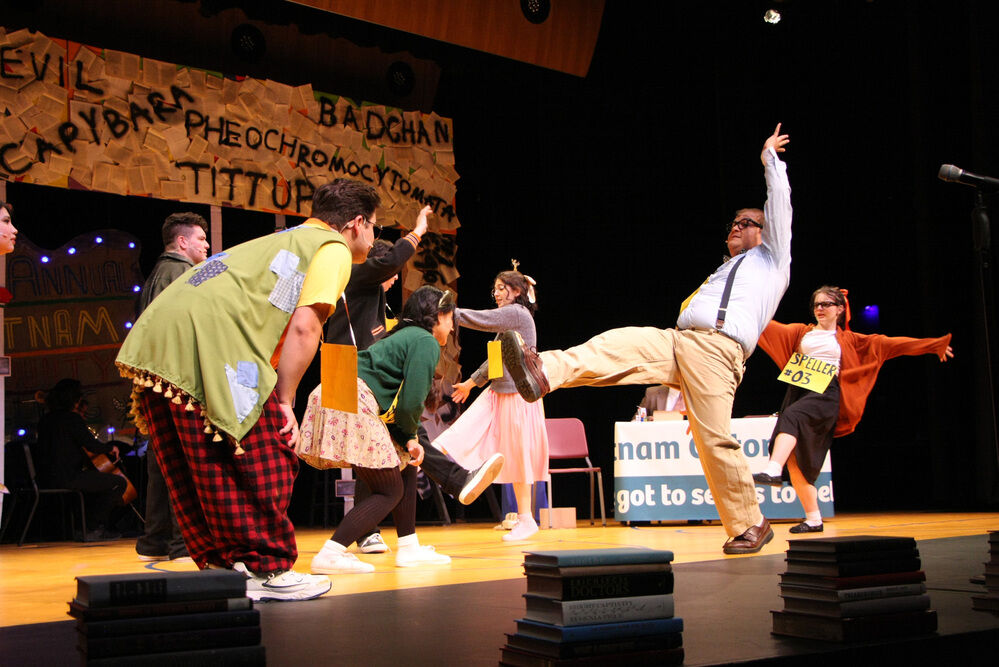 College students dressed as middle schoolers describe the "pandemonium" of their lives while attempting to win a spelling bee during WNCC's production of "The 25th Annual Putnam County Spelling Bee." 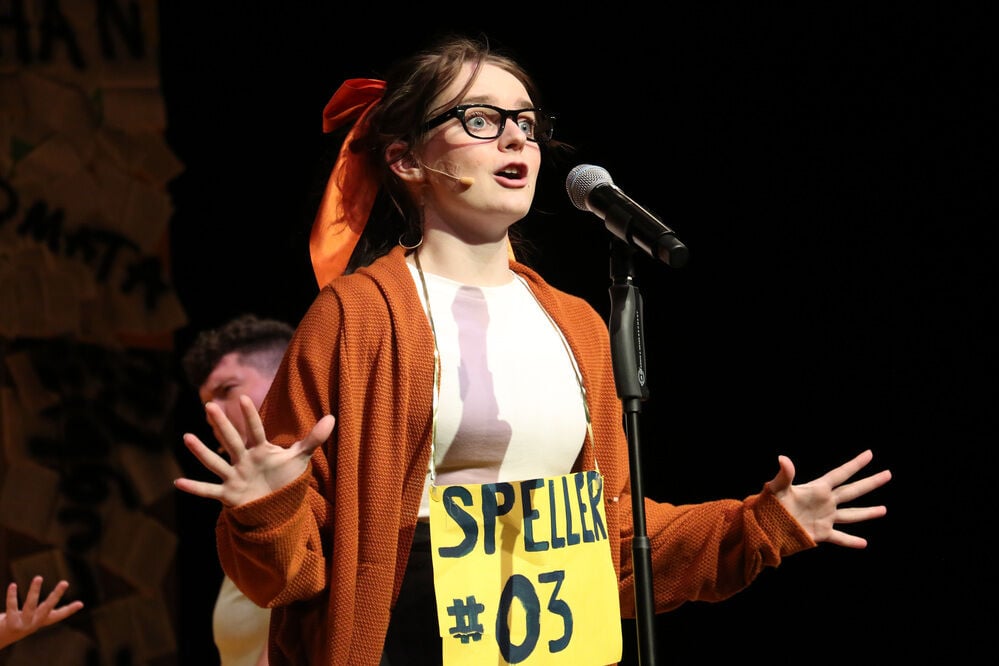 The quirky musical comedy, which is about six middle schoolers competing against each other in a spelling bee, seemed like a good show for Violette Kjeldgaard’s debut as WNCC theater instructor.

“A show that would be fun, one that might be more well-known for the audience — especially with me being new and nobody knows me in town — they might be a bit more willing to come and check it out, if they know the show (or) they recognize the show name,” she said. “It’s a fun one to start off the year, but there’s also a lot of elements to it that are teachable moments.”

Despite it being her first show at WNCC, Kjeldgaard said she isn’t feeling too nervous.

“It’s just more excitement. It’s looking at how far we’ve come, what we’ve got left to do and staying focused and on task,” she said. “Every night the actors are doing something new and different and still discovering and playing with what they’re creating, and that’s the fun thing for me is seeing them being like, ‘Yeah, let’s add that, keep that, build on that,’ and seeing that development from start to finish. I’m just ready to see them on stage and do their thing.

Assistant stage manager Marissa Wright said that’s what she’s looking forward to for the production as well, especially since most productions last year went without audiences.

“I’m looking forward to the performances to see how the actors react when we have a full audience after not necessarily having audiences within the past year because of COVID,” she said. “And in seeing that and knowing that they have an audience to perform in front of, I think that it’ll help them become better actors.”

“So far it’s been a really good experience,” he said. “…A lot of these cast members are from Scottsbluff and I graduated from Mitchell, so I kind of felt like a loner at the beginning of it but by the end of it, I felt really accepted here, so it’s been a good experience so far.”

For Caiden Herambe, who is plays the role of “Voice” in the production as well as being an assistant manager, this production gave him the chance to try something new.

That’s the nice thing about productions at the community college level, Kjeldgaard said. It gives people of various backgrounds, whether students or even community members, the chance to try different things.

“Pretty much everyone who auditioned is somehow involved in the production, whether it’s as a stage manager or a crew hand, or set, lights, sound,” she said. “There’s a whole array of things that they can do you, and luckily, they understand that that’s just as important as being on stage, and it’s part of that learning process. And they’re all very excited and willing to jump in and learn.

“We’re a community college, and that means we are here for the community. Our auditions, our productions are open to the community, not just to be an audience member, but if anyone wants to come and work on the show, audition for the show — be (that) use their skills in carpentry or sewing or whatever else. They are welcome to join us.”

The show also incorporates volunteer spellers from the audience. Kjeldgaard said that anyone who loves to spell and would like to volunteer should speak with the house manager, Hunter, when they arrive.

Bryanna Winner contributed to the reporting of this story.

An act of kindness: Westmoor, City of Scottsbluff partner for food drive

Petition drive aims to eliminate Nebraska Board of Education, give governor K-12 oversight

A petition drive is underway that would replace the State Board of Education, education commissioner and Nebraska Department of Education with a new Office of Education accountable to the governor.

Scottsbluff one act season off to a good start

The Snapchat video was made after officers dealt with the teen on Wednesday, Grand Island Police Capt. Jim Duering said, for shooting dumpsters with a Daisy Red Ryder BB gun southwest of Grand Island Senior High.

After the final note was sung, Sidney High School’s State of Mind choir walked away with the Best of the Fest award at the Old West Choir Fest…

The ACLU accused the Cody-Kilgore school district of racial discrimination, saying it had an unwritten head-lice policy that applied only to Native students.

A new program at Scottsbluff Public Schools is doing whatever it takes to get students to school.

Maj. Stephen Watt recently returned home after a tour in Baghdad. But one more top-secret mission was in store: a surprise reunion with his children at Cathedral of the Risen Christ Catholic School on Thursday.

College students dressed as middle schoolers describe the "pandemonium" of their lives while attempting to win a spelling bee during WNCC's production of "The 25th Annual Putnam County Spelling Bee."