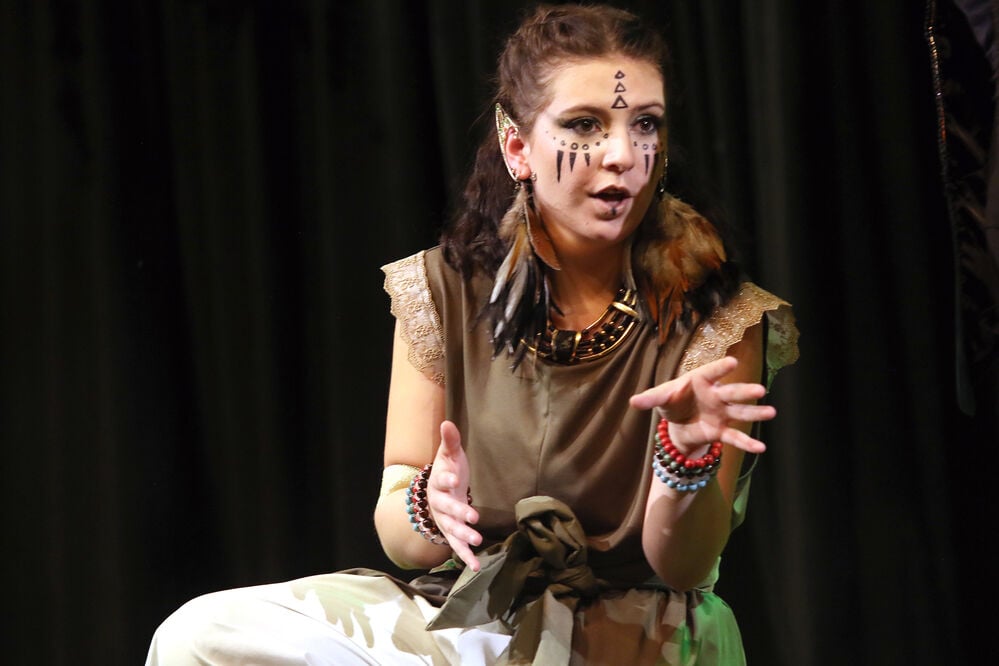 Jade Cash plays Puck, the "little fairy of mischief, sort of like a goblin or little creature ... (who) controls the action that happens in the show," she said. 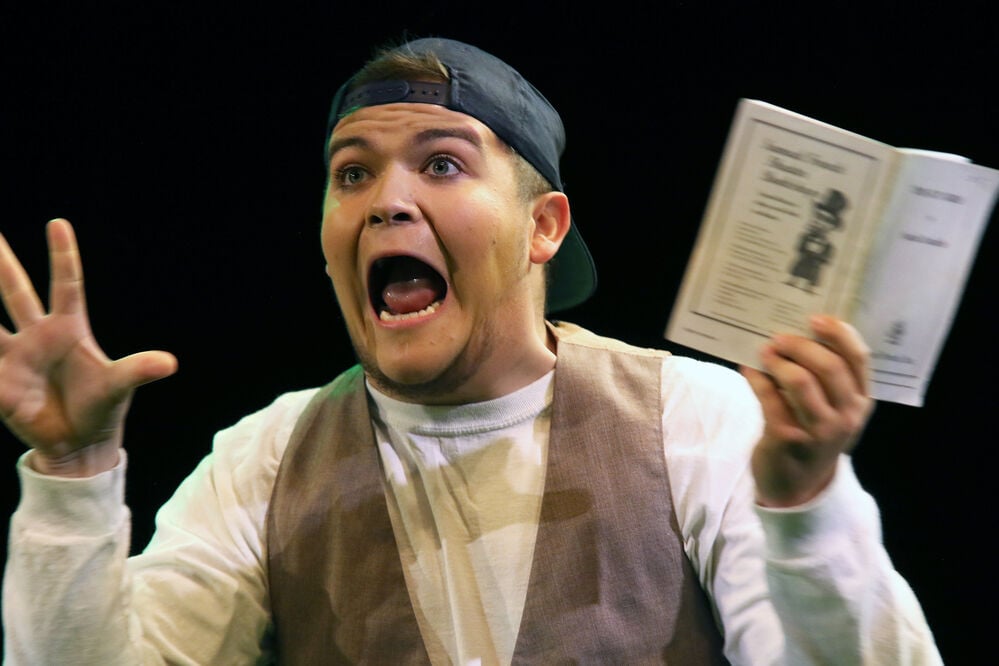 Ty Corr plays Bottom, a character who plays a lover in the play within the play. Bottom warms up for the rehearsal with his script in hand. 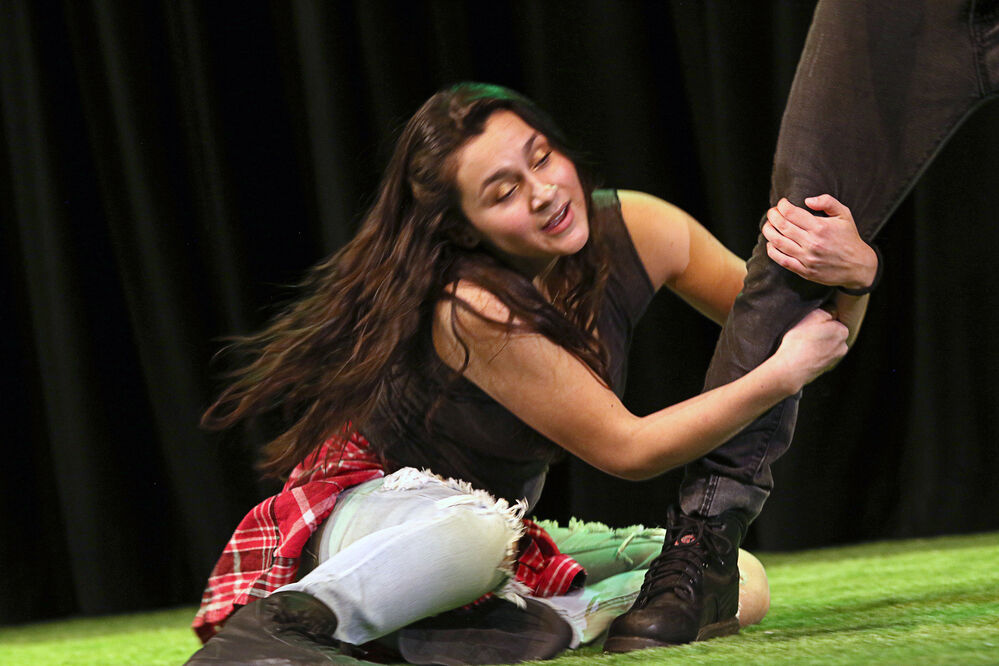 Helena, played by Amber Romo, clings to the leg of the man she loves, Demetrius, as he tries to escape her grasp.

After over a year of virtual theater, WNCC students in the performing arts program are flexing their live performance muscles as they prepare for their final show of the 2020-21 season.

The theater department will be producing Shakespeare’s “A Midsummer Night’s Dream,” adapted by theater arts instructor Francesca Mintowt-Czyz. She described the roughly hour-long play as a comedy that contains misdirected love, pranksters, a troupe of actors and magic. The play will be performed on April 16-18.

Aside from her adaptation of the play to make it slightly more modern, Mintowt-Czyz said the play is largely a student-run production. The set and costumes were designed by students, and the tech crew is largely led by students. Actors include WNCC students and children from the community.

“You look at the stage and you go, a student did that,” she said. “A student built that. A student made them look like that. A student’s calling the show. I mean, it’s, really quite cool that it’s a student run thing. Even if there are glitches, knowing that this is a learning environment where students are essentially running the show, I think it is just — that’s a well-oiled department. It’s a self-sufficient department.”

Assistant stage manager Sarah Kralovec said she was ecstatic that Mintowt-Czyz went with her design for the set.

“It’s been such a fun, creative process. I really liked the design process, if I’m not lying. And Franchesca really let me run with it,” Kralovec, a freshman, said. “I think that’s really cool. I don’t think a lot of people get that.”

The student actors noticed the difference too. They said it is slightly intimidating returning to the stage with a Shakespearean play, but it’s definitely worth it.

“It’s a little intimidating, but I am working with so many talented actors that it’s become fun,” freshman Japheth Frey, who plays Lysander, said. “It’s a whole new world performing in front of a live audience.”

Sophomore Jade Cash, who plays the mischievous Puck, said, “I’m so pumped, I could die. It’s just so different performing when there’s not an audience here. And there’s so much energy that’s lacking in the performance and so much that you miss from having actual people to actually react to what’s going on. I’m super excited.”

Ten-year-old Adriana Canales said she’s enjoyed her time being a part of the collegiate production as a fairy. She even has a small speaking part.

“I actually kind of like it, but I just have to be more loud, I get to run around,” she said, explaining her favorite part about being a fairy.

Mintowt-Czyz said she is just glad to finally share something in person with the public and hopes it brings some joy to the community.

“I’m really thrilled that it’s a funny show. I’m excited to deliver some joy to the community that we can all experience together — not virtually. I’m excited to provide opportunity where people can laugh together.”

Tickets are on sale now and must be purchased in advance: https://wncc.edu/community/foundation/midsummers-night-dream-tickets. You can also call the Kelley Bean Box Office at 308-635-6193. General admission is $10.

It’s every high schooler’s dream to don a cap and gown and walk across a stage to receive their hard-earned diploma. Not many would even fatho…

Scottsbluff, Gering and ESU #13 will come together Monday in a joint drill.

Seniors at Gering High School whooped and hollered as they ran from the building on their final day of school, taking their last steps on camp…

In 1983, 19-year-old Cheryl Rose agreed to be a volunteer for a new children’s program that was coming to her church. The then-pastor and his …

Lincoln Elementary preschool teacher Amanda Schultz lined her students down the hallway from her classroom a little after 8 a.m. on Friday mor…

The Scottsbluff High School auditorium will receive an upgrade to its nearly 20-year-old equipment ahead of next school year.

The role of a school nurse can be complex, from handling little emergencies to 911 calls and everything in between. Through fostering relation…

Everyone has a story that involves music, whether listening to the radio, watching movies, playing an instrument or singing. For Bluffs Middle…

Jade Cash plays Puck, the "little fairy of mischief, sort of like a goblin or little creature ... (who) controls the action that happens in the show," she said.

Ty Corr plays Bottom, a character who plays a lover in the play within the play. Bottom warms up for the rehearsal with his script in hand.

Helena, played by Amber Romo, clings to the leg of the man she loves, Demetrius, as he tries to escape her grasp.