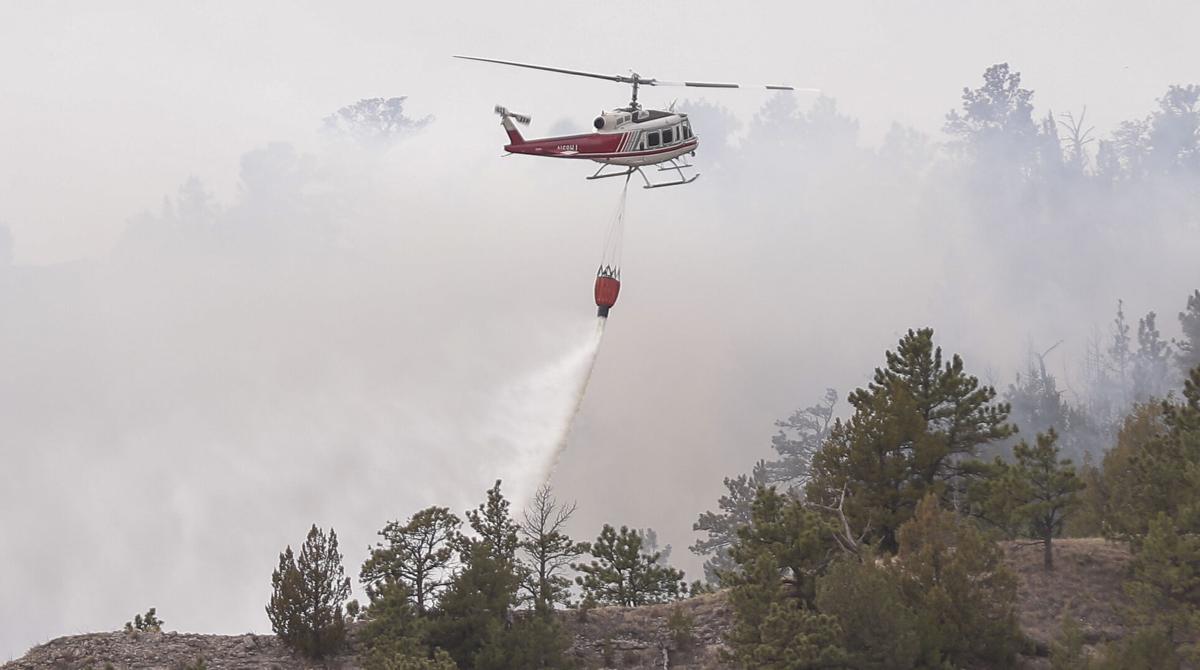 A helicopter dumps water on the Buffalo Creek Wildfire on Tuesday, Nov. 16. 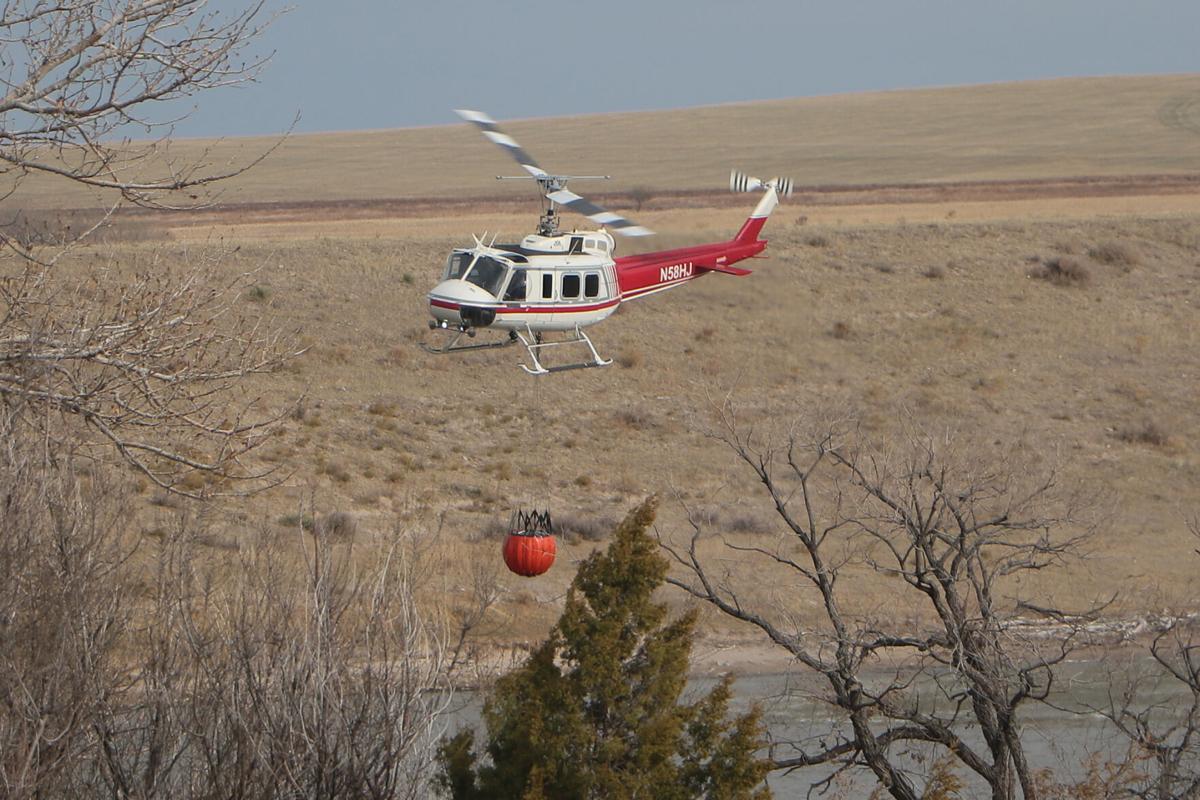 A helicopter scoops up water at a pond along Highway 71 as firefighters battle the Buffalo Creek Wildfire on Tuesday, Nov. 16. 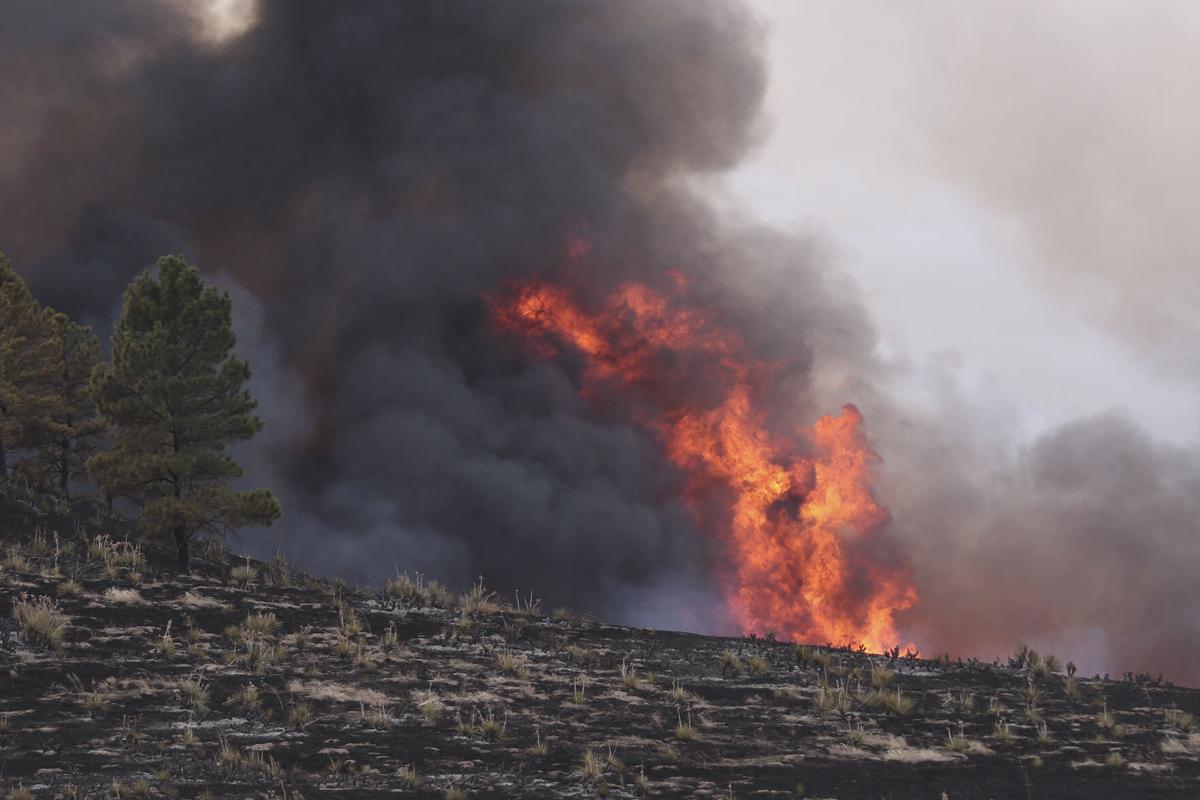 Flames flare up as firefighters backburn some of the trees to prevent the fire from spreading as they battled the Buffalo Creek Wildfire on Tuesday, Nov. 16.

The Buffalo Creek Fire is reported to be about 40% contained, according to an update Tuesday morning. The latest estimates are that 2,560 acres have been burned in the fire, which started Sunday. Those estimates are made through ground mapping and multi-mission aircraft.

“Very minimal growth has occurred over the last 12 hours,” according to the update provided to the media by Region 22 Emergency Manager Tim Newman.

During efforts on Tuesday, the update reported, firefighters will focus efforts on structure protection and suppression along Wrights Gap Road.

“Several homes are in the immediate path of the head of the fire and are still threatened. As of today, no structures have been lost. Energy infrastructure, agriculture infrastructure and watersheds have been impacted.”

in coordination with the Nebraska Game and Parks Commission, the update states, fire managers have established current and future objectives. The top priority in fighting the fire has been the safety of the public and firefighters. Helicopters are planned to be used again to cool areas where terrain is inaccessible by firefighters. On Monday, two Blackhawk UH-60 helicopters from the Nebraska National Guard and a helicopter from Colorado were in service.

Again on Tuesday, Red Flag conditions persisted. The National Weather Service placed temperatures in the 50s and the 60s, humidity at 20% and wind speeds at 20-30 miles per hour. Gering Fire Chief Nathan Flowers explained Monday that those conditions make fuels, like grasses and trees,

The effort to contain the fire is expected to continue through the week, according to the update. Ninety percent of the fire perimeter is within the Buffalo Creek Wildlife Management Area. The bulk of the fire sits within the initial district covered by the Banner County Fire Department, lead by Fire Chief Tim Grubbs, who is also serving as incident commander. As of Tuesday, 27 departments have supplied resources and firefighters have been working 16-hour shifts to obtain containment.

“Even though the fire is 40% contained, smoke and heat will be visible within the perimeter for weeks or until significant moisture," the update reported.

Carissa Schank, of Firefighter Ministry, has been overseeing the gathering of needed supplies. At this time, she said, no specific items are needed.

Mixing Bowl to mix things up with new location

Jamie Meisner has owned The Mixing Bowl Cafe in Gering for a little over eight years now. Over time, it has expanded to become a premier dinin…

A Crawford woman and her daughter from Chadron were killed around 4:20 p.m. on Friday, Jan. 14, when their vehicle collided with another near …

Panhandle public health officials are seeing a rapid increase in COVID-19 cases, particularly among youth age groups, over the past week.

The Mitchell city hall has undergone a makeover since the New Year, a move planned and enacted entirely by the city’s workers. The city staff …

Larry Bolinger, an Alliance man who previously ran for Congress, is aiming to become Nebraska’s next Attorney General.

A Sidney woman has been sentenced to nearly four years in prison for distributing 70 grams of methamphetamine.

A helicopter dumps water on the Buffalo Creek Wildfire on Tuesday, Nov. 16.

A helicopter scoops up water at a pond along Highway 71 as firefighters battle the Buffalo Creek Wildfire on Tuesday, Nov. 16.

Flames flare up as firefighters backburn some of the trees to prevent the fire from spreading as they battled the Buffalo Creek Wildfire on Tuesday, Nov. 16.