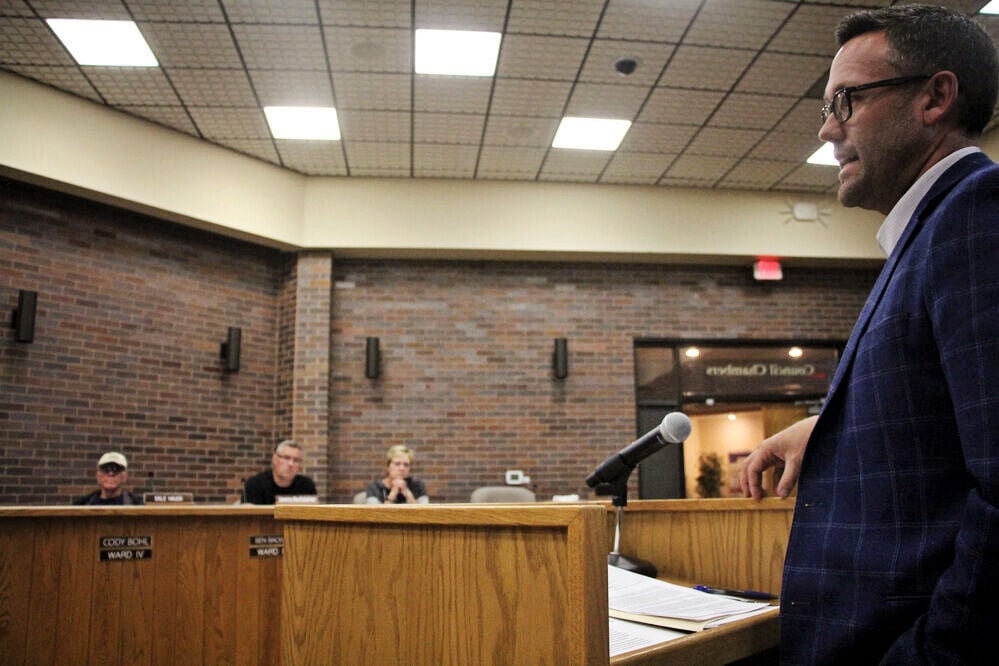 Sean Boyd of the Local Gaming Nebraska group presents more information on the eventually-approved racetrack and casino application for Gering. 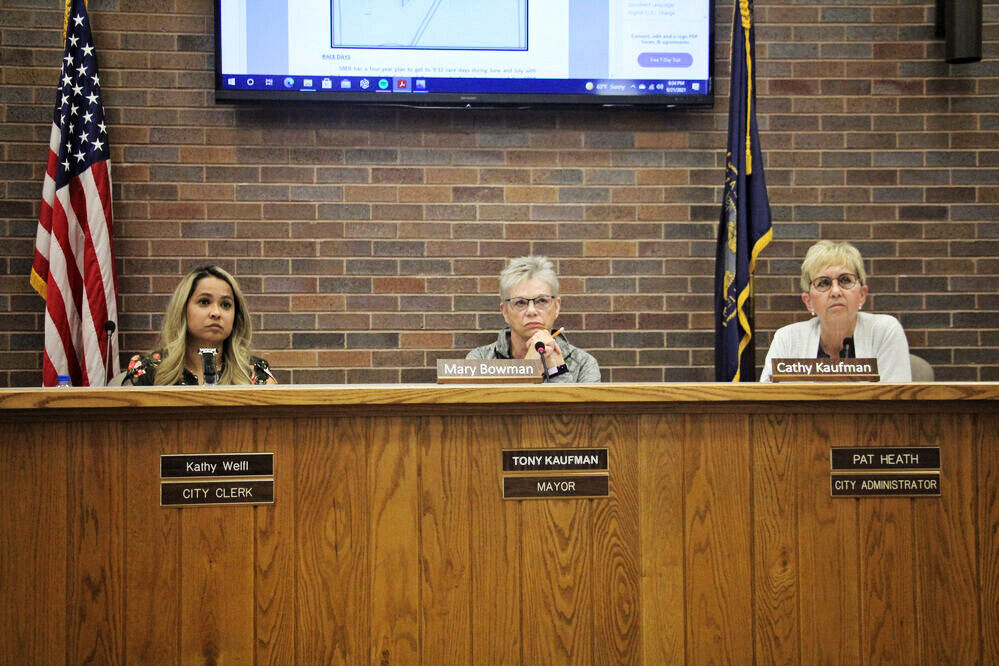 Gering Planning Commission members Mary Bowman (center) and Cathy Kaufman (right) listen to presentations by community members in support of and against a proposed casino and racetrack. The commission approved the facility in a 6-2 vote.

A casino and racetrack is one step closer to being built in Gering after the city’s planning commission approved an application to build proposed facilities.

Commission members voted 6-2 on Tuesday to allow the Scotts Bluff Exposition and Racing (SBER) group to construct the buildings just outside the southern tip of city limits, between Kimball Avenue and Highway 71. There are, however, several caveats.

City engineer Annie Folck provided a detailed list of recommendations necessary for the property to be developed, including the annexation of the property. SBER, managed by the Becker family of Hastings, will be responsible for all utility improvements, extending water and sewer lines on the property, providing landscaping along roads, and ensuring adequate space between the site and existing residential structures to the north.

She said they must also conduct a traffic study and provide traffic control, keep the property well-maintained, including all-LED lighting, and quickly remove all manure.

Folck said the group’s existing plans were “fairly vague.” She recommended the condition that the group go through the city’s site plan review process, provide additional, extremely detailed plans, and go through another meeting with the commission and the public so they can weigh in on specifics.

Sean Boyd, a representative with Local Gaming Nebraska, provided additional details on the application before the commission voted. Local Gaming Nebraska is an entity of the Chickasaw Nation, which operates two dozen casinos in Oklahoma and will be working with SBER to operate the facility. He said the size of the Scottsbluff-Gering area ”does justify an entertainment venue such as this.”

The plan for the racetrackis to host one race day in the first year, he said, and increase that to around a dozen by the fourth year, with multiple races per day. The reason for phased approach is to allow for Nebraskan-bred racing quarterhorses to develop.

The commission had a few questions for Boyd, namely how the organization would benefit the community and if there would be a hotel added to the property later on.

Close to 20 Gering residents also attended the meeting, many of whom had comments of their own either in support or opposition to the racetrack and casino idea.

The majority of the  residents who opposed it either lived or worked in close proximity to the property it would be built on.

Gary Hashley, a local pastor, said the facility would be detrimental to the community, a sentiment shared by several others.

“A rose by any other name is still gambling. Do we want our young people to grow up thinking the answer to all their financial problems is to go to the casino?” he said.

Aaron Luce, whose property is directly northeast of the site’s proposed parking lot, wondered if the racetrack and casino would bring in as many people as the developers said they would. The facility’s parking lot would be designed to hold 900 cars. Folck said the application mentioned bringing in 2,000 to 3,500 people per day when holding more races.

“Where are these people coming from ... from how big of an area are we actually going to draw to bring in 3,000 people to our area?” Luce said.

He pointed out that proposed racetrack and casino facilities in Kimball and North Platte would draw potential visitors away.

”...I think the numbers they’re presenting are skewed. There’s no way 3,000 people are coming to this facility per day.”

A few residents, such as Paul Reed, did express a desire to have the racetrack and casino built, saying it would bring in much-needed tax revenue from visitors.

“I believe you should do everything you possibly can ... to make this deal happen because I think it’s very important to this community,” Reed said.

The proposed racetrack would include four stables, a paddock viewing area, a winner’s circle and a 5/8 mile track. The 40,000 square foot casino would include 650 electronic games, a restaurant and bar, and a retail and gift shop.

The next step is for the application to go before the Gering council for approval. The Nebraska Racing and Gaming Commission will also have to approve the racetrack and casino.

Scottsbluff City Manager Dustin Rief could be set to get a 10% increase in pay in his first year heading western Nebraska’s largest city. At l…

The Kimball City Council will interview two candidates for its city administrator position.

Roads projects and needs seemed to be the central part of the Gering City Council meeting Monday night, with transportation superintendent Cas…

Sean Boyd of the Local Gaming Nebraska group presents more information on the eventually-approved racetrack and casino application for Gering.

Gering Planning Commission members Mary Bowman (center) and Cathy Kaufman (right) listen to presentations by community members in support of and against a proposed casino and racetrack. The commission approved the facility in a 6-2 vote.