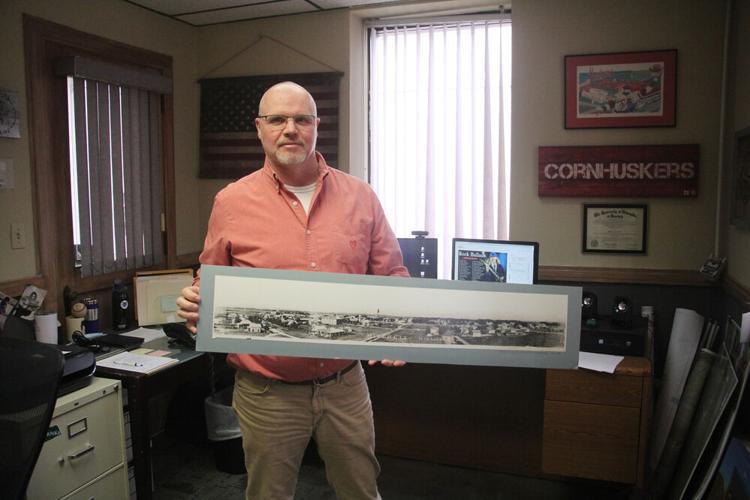 City administrator Perry Mader holds a historical photo of downtown Mitchell, the kind he said he'd like to decorate the city council chambers with in the recently renovated Mitchell City Hall. 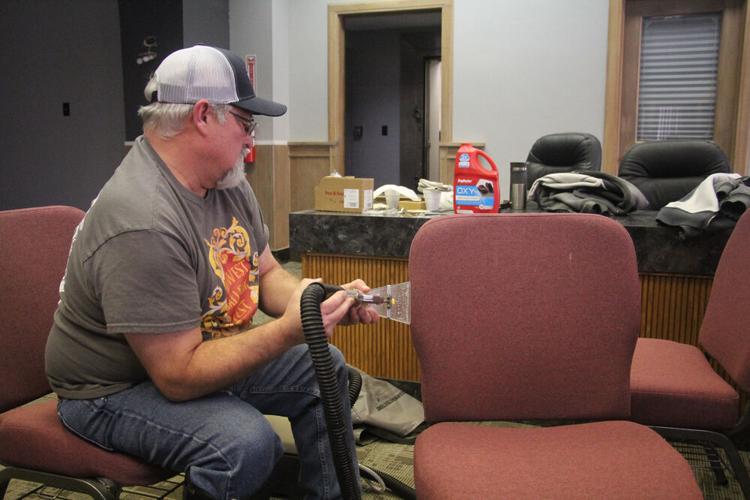 Brent McDaniel cleans a chair to use in the new Mitchell City Hall. The renovated interior will have new chairs, new paint and an updated section for the police department to use. 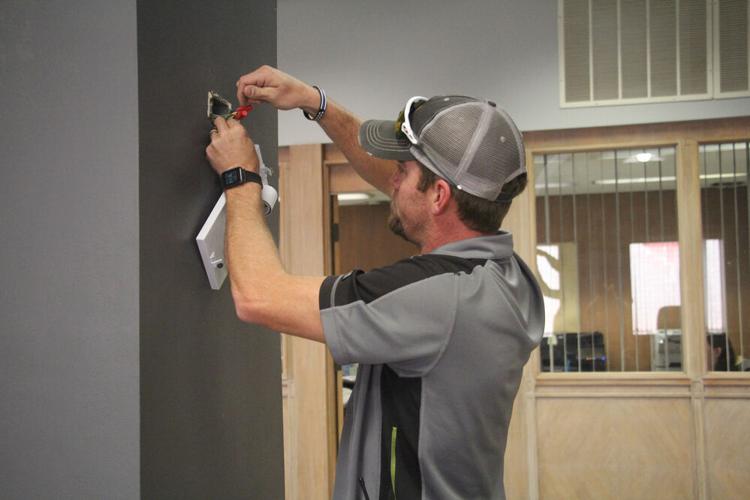 Derek Shultz is hard at work renovating the interior of the Mitchell City Hall. Various city employees helped in both designing and installing the new features of the building.

The Mitchell city hall has undergone a makeover since the New Year, a move planned and enacted entirely by the city’s workers. The city staff had been contemplating a renovation for their council chambers for at least half a decade, but this month was the first time they could put their plan into action.

“The building was dated (and) not very inviting to the public, and we’ve been talking for the last couple of years about giving it a face lift. We put some money into the budget for different things such as the renovation and some signage and some handicap-accessible doors. We just got to a point in the year where we had staff available and we had paint donated, so we just thought this was as good a time as any to start the remodeling,” city administrator Perry Mader said.

Five years ago, the council had received a cost estimate for interior renovations. Their estimate showed it would have cost between $15,000 and $25,000 to hire contractors for the job. By utilizing their own staff on the project, the city saved money and helped provide everyone involved with a sense of ownership.

The process was not a lengthy one, taking less than two weeks from when the first old wallpaper was torn down to a mostly-finished product. Much of the work is simply aesthetic upgrades, with no major construction or demolition required. One of the first steps was to remove excess property — “old clutter that has been here 20, 30 years,” Mader called it. This included random boxes, broken furniture and ancient typewriters. Then the lighting had to be replaced, the walls had to be painted and new additions such as unused chairs from storage were cleaned and added. Most of the ideas were brought up by city staff.

The city is looking for old black-and-white photos to use as decorations. There isn’t much wall space for them, but Mader said they’d be welcome inclusions. The ideal photos would feature the downtown area, parks or businesses. The city has a few to choose from already, but Mader said they’d like more. Residents with such photos can drop them off to either be copied or donated.

When the interior is finished, Mader said the city might work on renovating the exterior stucco and signage in the spring.

The council chamber was not the only part of the building the team renovated. The police office down the hallway received a substantial makeover as well.

The new office has a decorative paint job along the walls: light grey on top and dark gray towards the bottom, with a thin blue stripe separating the other colors. “We made it a little more (of) a police motif. It was all prison-white at one time,” police chief Kevin Krzyzanowski said. “...Normally we’d try to hire somebody, except me and (officer) Chuck (Menezes) are going to do it. The guys from the PD, and with a little bit of help from the city, have done all the painting in this part.”

The officers work between calls, helping out whenever they can. Krzyzanowski said the previous office had been “a mess ... old and white and dingy.” The new one has more of a modern touch to it, with police graphics and wordmarks adorning the walls and new desks, computers and carpeting.

Snow fell on Wednesday, Jan. 19 but not enough to require lengthy plowing, so city workers were able to continue their work refurbishing the council chamber. Mader and Krzyzanowski said the renovations should be finished by the end of the week.

The Gering city council held a quick meeting Monday, needing just 15 minutes to get through all agenda items. Half of the meeting was focused …

Eleven Republican candidates are running for the three Scotts Bluff County Board of Commissioners seats at stake in the 2022 elections. The ca…

Five candidates have thrown their hat into the ring to run for the Legislative District 48 seat currently held by John Stinner, of Gering. Sti…

Two candidates in the running for county surveyor spot

Two candidates are competing for the Scotts Bluff County Surveyor position in this year’s primary election. Both incumbent Dennis Sullivan and…

Three candidates are vying for Gering mayor, wishing to fill the seat being vacated by current mayor Tony Kaufman.

Two candidates — Jean Bauer, incumbent, and Angie Hernandez — are running to serve as the Scotts Bluff County Register of Deeds. On May 10, vo…

County board approves $20,000 to bring PRCA rodeo to county fair

The Scotts Bluff County Board of Commissioners held a packed meeting Monday, approving various plans including one to bring a rodeo to the Sco…

Hundreds of people rallied on the north side of the Capitol for the second time since a draft Supreme Court opinion striking down Roe v. Wade was leaked.

Life aboard the International Space Station

Life aboard the International Space Station

The Queen’s ‘best friend’ has moved into Windsor Castle

The Queen’s ‘best friend’ has moved into Windsor Castle

City administrator Perry Mader holds a historical photo of downtown Mitchell, the kind he said he'd like to decorate the city council chambers with in the recently renovated Mitchell City Hall.

Brent McDaniel cleans a chair to use in the new Mitchell City Hall. The renovated interior will have new chairs, new paint and an updated section for the police department to use.

Derek Shultz is hard at work renovating the interior of the Mitchell City Hall. Various city employees helped in both designing and installing the new features of the building.