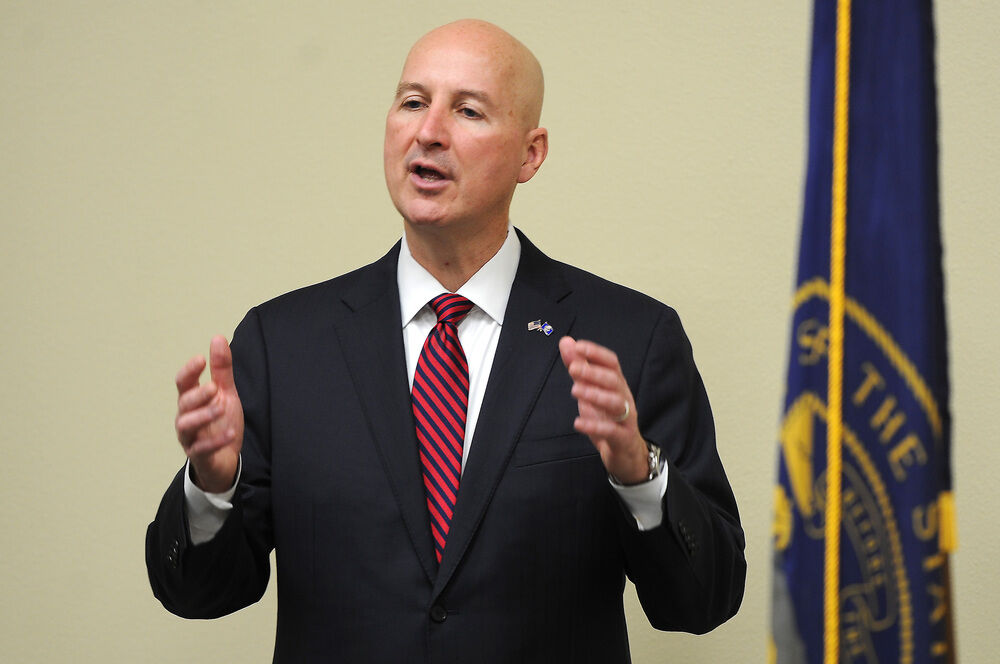 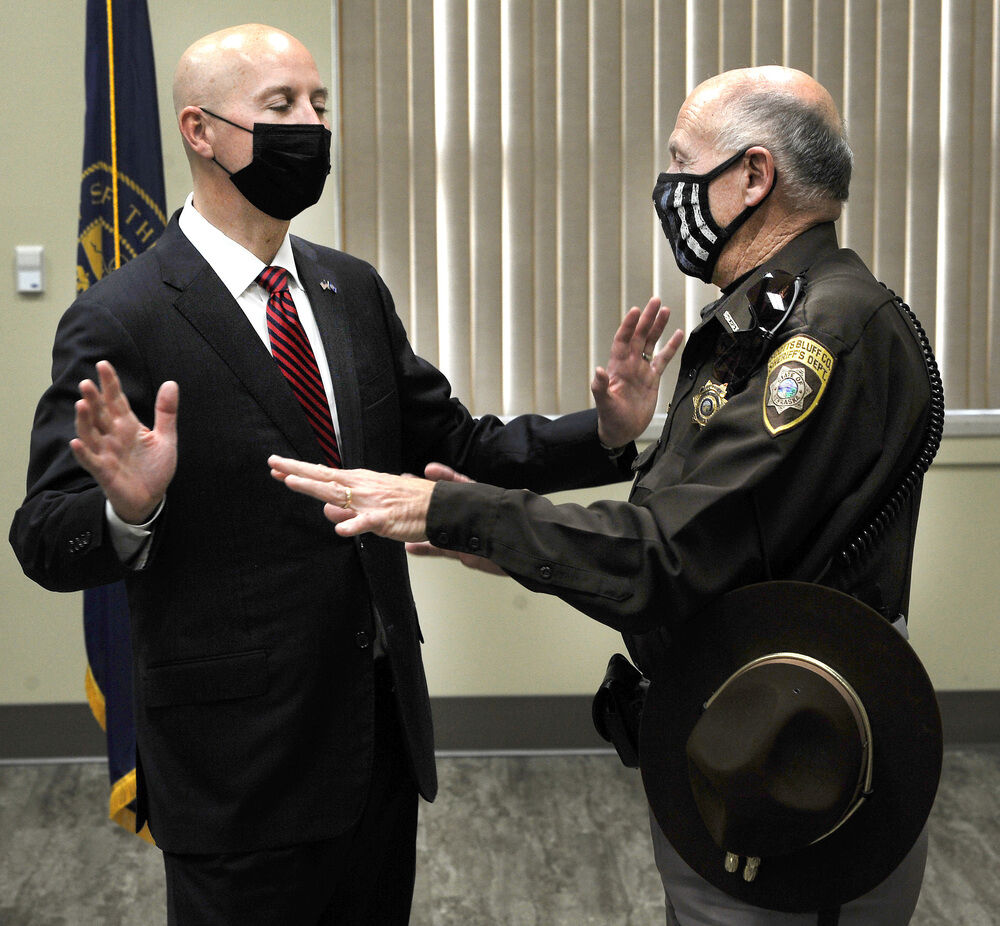 Nebraska Governor Pete Ricketts talks with Scotts Bluff County Sheriff Mark Overman Thursday, Jan. 13, at the Western Nebraska Regional Airport. The governor made a stop in Scottsbluff to talk with people about his priorities for the upcoming year. 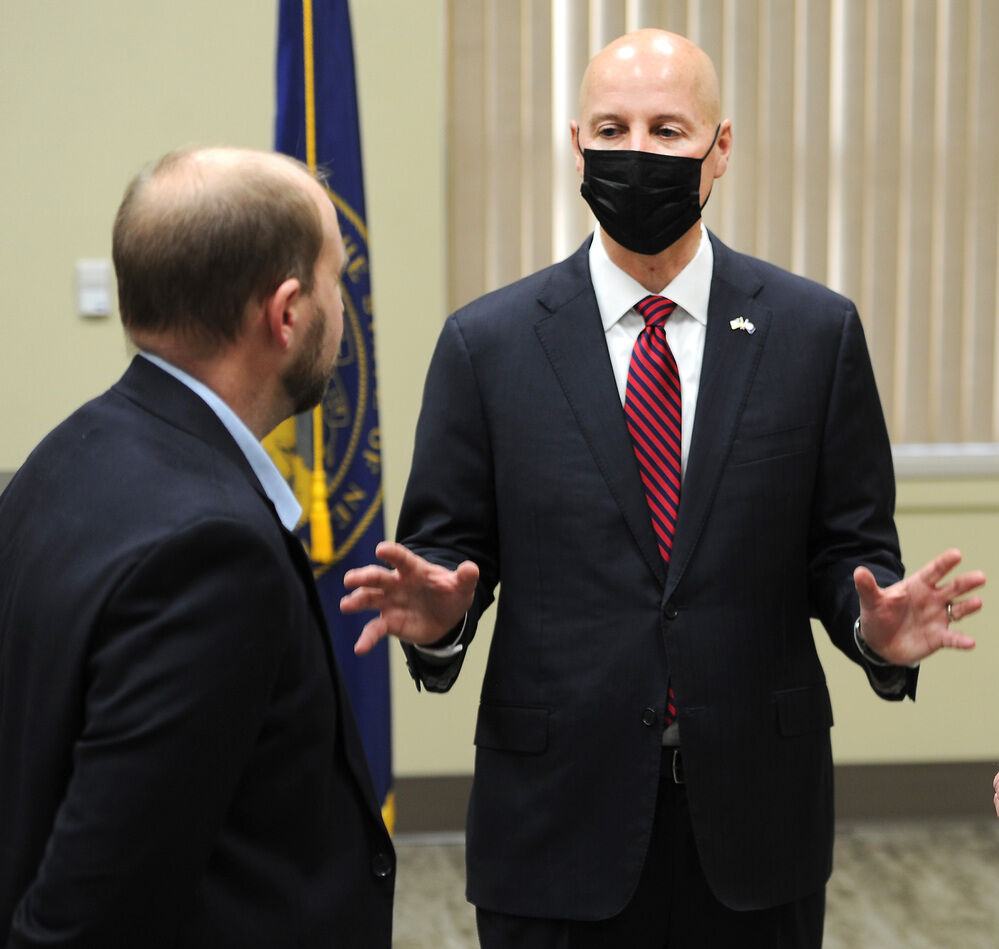 Nebraska Governor Pete Ricketts laid out some of his political plans for the legislative session during a trip to Scottsbluff on Thursday. His press conference at the Western Nebraska Regional airport was part of his ‘State of the State Fly Around.” It followed the State of the State address he had given in Lincoln earlier that day.

Ricketts said his initiatives for the session included providing tax relief, strengthening public safety and investing in Nebraska’s natural resources. Several projects he laid out in his natural resource agenda would have a massive impact on the western part of the state.

Ricketts said he would ask the legislature to budget $500 million to construct a canal along the Colorado state line from the South Platte River to a series of western Nebraska reservoirs in a project dubbed the Perkins County Canal. The Nebraskan government has the ability to do this due to a 1923 water-sharing agreement between the two states. Nebraska is entitles to 120 cubic feet per second from the South Platte River during the irrigation season between Apr. 1 and Oct. 15, as well as 500 cubic feet per second outside of those dates.

“If we do not do this, Colorado has on tap nearly 300 projects totaling about $10 billion that our Department of Natural Resources estimates would reduce the flow of water into Nebraska from the South Platte River by 90 percent,” the governor said. “That would have a huge impact on our ability to irrigate. It would impact drinking water all along the Platte River, as far away as Lincoln and Omaha. It would impact our ability to generate power ... and of course it has all sorts of impacts on the natural environment.” Ricketts said such a large-scale project would not happen overnight, and that the first step was to get appropriation from Colorado’s government.

Additional water-related projects were part of the STAR WARS committee’s project. The STAR WARS, or Statewide Tourism and Recreational Water Access and Resource Sustainability, committee was formed in June 2021 to identify potential areas for tourism expansion. Ricketts said he would ask the legislature to budget $200 million for these endeavors. They include building a marina at Lake McConaughy in western Nebraska as well as creating a 4,000-acre reservoir between Lincoln and Omaha.

Due to the American Rescue Plan Act signed by President Joe Biden in March, the state received $1.04 billion in funding to help its economy during the coronavirus pandemic. Ricketts said some $284.2 million of this will go towards water and sewer infrastructure. this includes #100 million to the Perkins County canal and $50 million to the STAR WARS projects. An additional $60 million in ARPA funds will improve drinking water systems in rural parts of the state.

ARPA money will also be used to permanently fix the Gering-Ft. Laramie Irrigation Districts Tunnel No. 2, which collapsed in July 2019 and caused local farmer to lose water for six weeks. Some $23 million in funds will be used to repair it completely.

Other uses of the ARPA money, if Ricketts’ recommendations are accepted by the legislature, include $90 million to expand community colleges, $75 million for workforce housing and around $200 million to support improved health care capacity.

During his presentation, Ricketts also promoted Nebraska’s 1.8% unemployment rate, the lowest among any state in recorded history; he also promoted that Nebraska was rated as having the best coronavirus response among all states by Politico. He said he planned to replace the state’s 153-year-old state penitentiary, as well.

In addition, he suggested tax changes such as phasing out social security tax over five years. He also said he wanted to reduce the top rate of income tax from 6.84% to 5.84% over five years. The governor said this would impact 400,000 Nebraskans making more than $33,160 individually.

The Mitchell city hall has undergone a makeover since the New Year, a move planned and enacted entirely by the city’s workers. The city staff …

Larry Bolinger, an Alliance man who previously ran for Congress, is aiming to become Nebraska’s next Attorney General.

Supporters said the bill would ensure Nebraskans of all faiths could practice their religion freely. But opponents said it would give special legal exemptions to religious people and organizations.

After more than an hour of discussion between the Scotts Bluff County commissioners and several employees, the commissioners came to an agreem…

Smith to run for 9th term in Congress

Congressman Adrian Smith, the representative for Nebraska’s 3rd District, announced on Wednesday his intent to run for re-election. If elected…

Commissioners give preliminary insights prior to special meeting for salary raises

Nebraska Governor Pete Ricketts talks with Scotts Bluff County Sheriff Mark Overman Thursday, Jan. 13, at the Western Nebraska Regional Airport. The governor made a stop in Scottsbluff to talk with people about his priorities for the upcoming year.