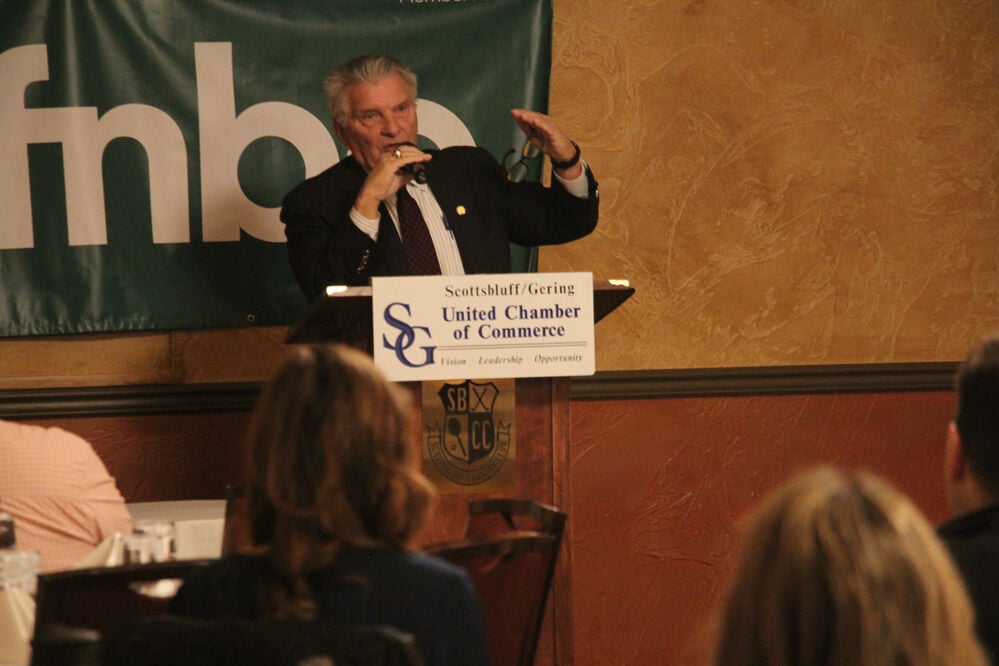 State Sen. John Stinner was the first speaker at Tuesday's Pre-Legislative Breakfast event. He presented on several accomplishments and tax-related goals for the next legislative session, which begins on Jan. 5. 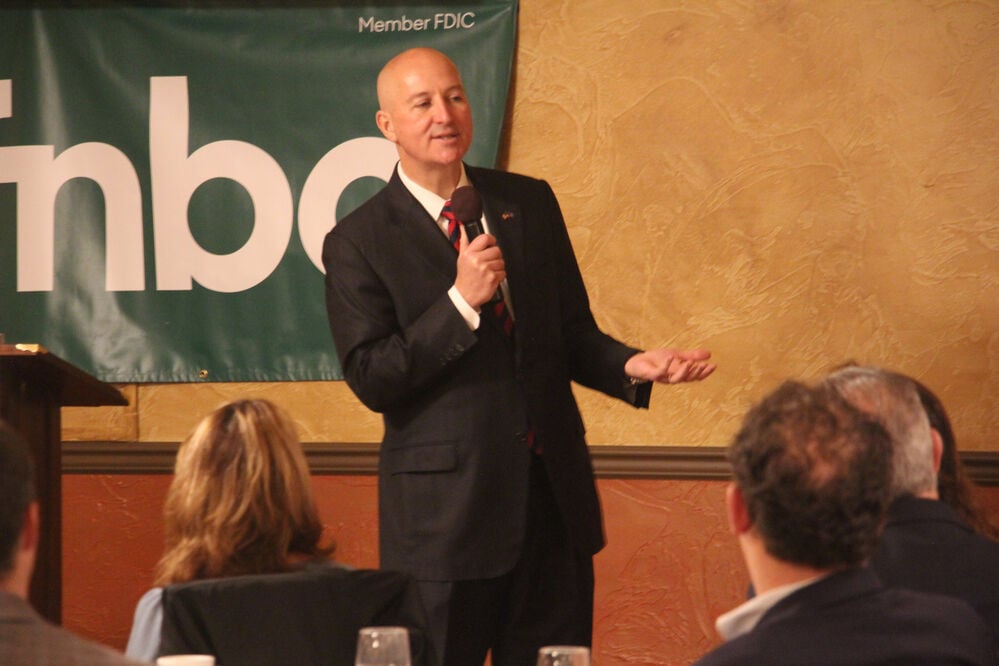 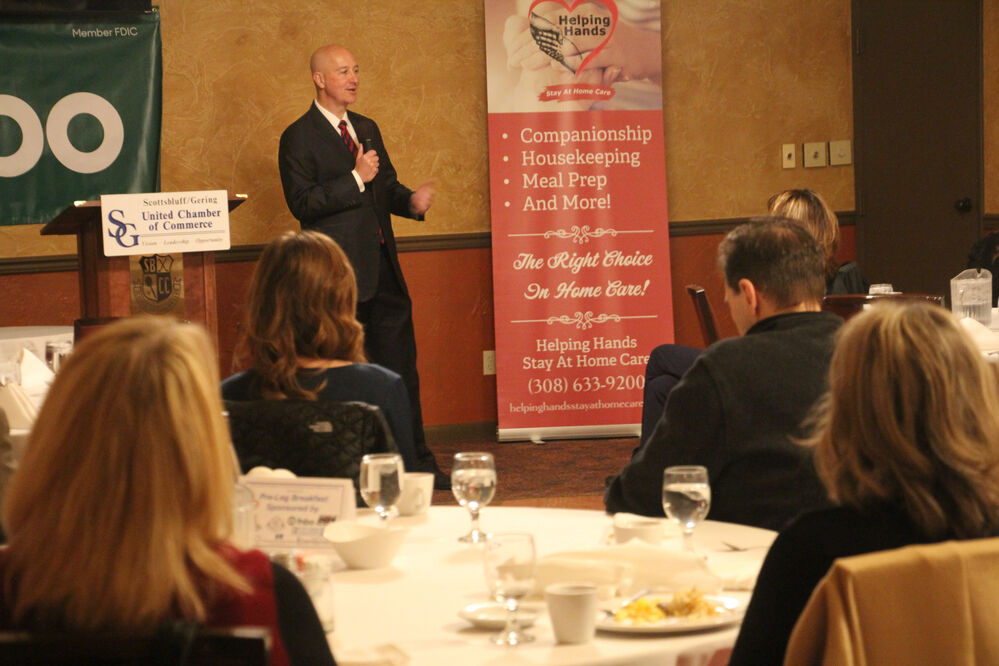 Gov. Ricketts answered a variety of questions during Tuesday's early-morning event. He gave his thoughts to constituents on such issues as the Nebraskan Racing and Gaming Commission, the proposed 'Waters of the United States' EPA changes, and a petition which would give him and future governors oversight over the state's Board of Education.

State competitiveness was the topic as Gov. Pete Ricketts and State Sen. John Stinner spoke of recent accomplishments and plans for the future during the annual Pre-Legislative Breakfast event.

More than 50 guests attended their presentations, gathering around tables at the Scotts Bluff Country Club. The breakfast was organized by the Government Affairs Committee of the Scottsbluff-Gering United Chamber of Commerce. The event took place on Tuesday, from 7:30 to 9 a.m.

As attendees dined on a buffet of eggs, hash browns and sausages, the elected officials provided updates on recent political happenings and goals for the next legislative session, which starts on Jan. 5, 2022. Rep. Adrian Smith, the congressional delegate from Nebraska’s 3rd District, was also in attendance. However, he did not speak at the event.

“I actually poked him to see if he was real or just a hologram,” Stinner said, jokingly. The state senator began his actual speech by recounting some recent achievements, such as the progression of the Heartland Expressway’s construction.

As chair of the legislature’s Appropriations Committee, Stinner’s speech revolved around the monetary state of the state. Nebraska has experienced a 14.6% revenue increase, he said, and the state’s rainy day fund will more than double from $400 million to nearly $1 billion.

“Obviously it’s an economic shock absorber,” Stinner said, “so it takes care of shortfalls in revenue...but it’s a one-time spend as well. So it’s a dual-purpose fund.”

He said the state is losing people such as military veterans to other states, and that there are plans in place to bring people back to stay in Nebraska.

Inflation, Stinner said, would prove a dilemma for the state’s budgeting process, but that it might be just a one-time adjustment. Overall, he said he was looking forward to meeting with members of the Government Affairs Committee while in legislative session.

When Stinner’s speech was concluded, Ricketts took to the podium.

Ricketts said his approach to running the state government was to treat it like a business. “We have seen that despite the pandemic, things are going pretty well here in Nebraska,” the governor said. “In fact, I think one of the reasons things are going so well is our response to the pandemic. We didn’t really shut down in Nebraska like some states did. We tried to take a balanced approach.” The coronavirus will be impossible to get rid of completely, he said.

But even with the pandemic, Nebraska’s economy is in a good place. The state has the highest employment per population ratio. Nebraska also has the lowest unemployment rate —1.9%— of any state in national history. Ricketts also said it was the second best state to find a job and the second best state for children’s economic wellbeing.

Some of his achievements to increase the state’s competitiveness include creating a talent pipeline to get students invested in the agriculture, manufacturing and technology industries. Ricketts also promoted apprenticeship programs, which increased by 14% in 2020 despite the pandemic.

The state’s recent ‘The Good Life is Calling’ campaign is another way to increase the state’s workforce. “This is a program where we are advertising in certain media markets to remind Nebraskans who have left what a great quality of life we have here in our state,” Ricketts said. “...Not only do we hope to get Nebraskans who have moved away, but we’re also hoping there’s future Nebraskans who we don’t know yet who will see that.”

Targeted cities include Chicago, Denver and Minneapolis. The goal is to draw in Nebraskans who might feel unsatisfied with ways of life in more urban areas in other states.

Among the demographics Ricketts is targeting are veterans. “Folks, we talk about workforce development, that is a workforce that’s already developed,” he said. Through the LB387 bill, he signed off on the repeal of military benefit taxation. ”Let’s hold onto our veterans, let’s get people to move here, let’s stay competitive.” The governor also promoted international trade. He told anecdotes about convincing German companies to open American facilities in Nebraska, as well as selling Nebraskan products to Vietnamese buyers.

Ricketts concluded his speech by expressing distaste with University of Nebraska-Lincoln Chancellor Ronnie Green over a plan to address racial disparities on campus.

He said Green approached him with a new program to increase minority faculty and staff in the University system. “I’m like, yeah, I would like to see it. But don’t do any of this politically correct stuff. You’re just going to make people mad,” he said. How the state targets minority employees is through advertising in media they’d be more likely to consume, and adding qualified candidates to the second round of the hiring process. “No quotas, all qualified people,” Ricketts said.

However, Ricketts said the proposal sent to him was based around critical race theory, with lessons from Boston University professor Ibram Kendi.

“Part of (Kendi’s) anti-racism philosophy is that you must discriminate against white people today because of discrimination against black people in the past,” Ricketts said. “The only cure for past discrimination is current discrimination. That’s almost a word-for-word quote from this guy.” He said such discrimination was against the state’s constitution, since it says racial preferences aren’t allowed in public education. “This needs to be changed. This is not right. This is not who we are ... I’m going to continue talking about this and we’ll see what the University does to respond,” the governor said.

State Sen. John Stinner was the first speaker at Tuesday's Pre-Legislative Breakfast event. He presented on several accomplishments and tax-related goals for the next legislative session, which begins on Jan. 5.

Gov. Ricketts answered a variety of questions during Tuesday's early-morning event. He gave his thoughts to constituents on such issues as the Nebraskan Racing and Gaming Commission, the proposed 'Waters of the United States' EPA changes, and a petition which would give him and future governors oversight over the state's Board of Education.