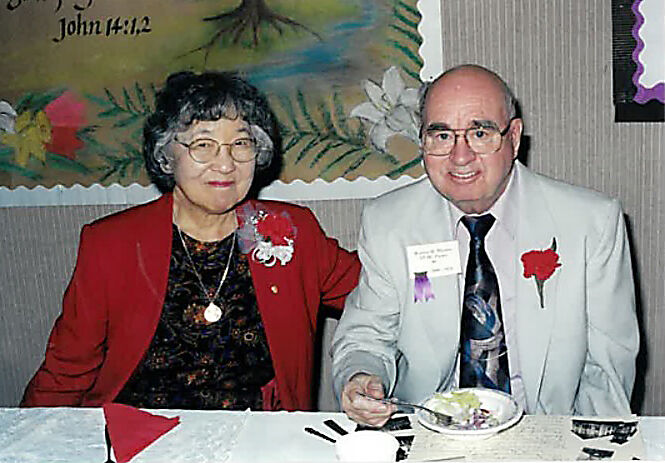 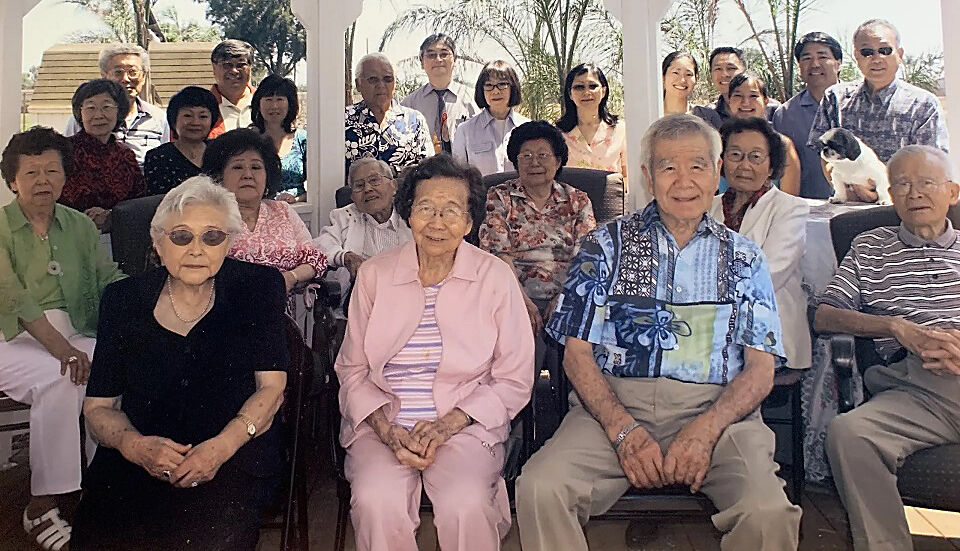 Joe Atsushi Naritoku (in the front row in a blue print shirt) at his 90th Birthday Celebration. Naritoku was one of the Japanese Americans imprisoned by the Federal Government because of his heritage. He was released to come to Scottsbluff. After a short time in western Nebraska, Mr. Naritoku went back home to a suburban area of Metropolitan Los Angeles. (Leslie Leong Naritoku, 2004.)

In addition to the Japanese Americans living in Scottsbluff and western Nebraska at the beginning of World War II, other Japanese Americans came to the area to continue their education as well as to work. A number of these individuals had been imprisoned by the federal government prior to their travels to Scottsbluff.

These specific Japanese Americans — all citizens of the United States — were incarcerated solely because of their ethnic heritage. This story highlights aspects of the lives of several of these individuals, while part five will focus on the details of the lives of five men who came to Scottsbluff and then served the nation as members of the U.S. military.

Dorothy Ichinaga was one of the Japanese Americans who came to Scottsbluff during this time. She was born in Pixley, California, in 1924, and grew up in Tulare, California. As a child, she and her sister, Phoebe, were both noted for their dancing as teenage girls at a local dance school and local girls organization in Tulare.

The Tulare Daily Advance-Register printed more than two dozen news articles highlighting dance programs Ichinaga participated in from 1936 to May of 1942.

In what could later be seen as one of the more ironic situations, the two sisters were part of a variety program put on by their dance school at a meeting of 500 Democrats in the Tulare area on April 28, 1936. A newspaper article published the next day in the Tulare Daily Advance-Register noted this meeting included local leaders making speeches with titles such as “Progress and Roosevelt,” “Democratic Responsibility,” and “Progressive Democrat.”

Six years later, President Franklin Roosevelt issued his Executive Order that led to the imprisonment of about 112,000 Japanese Americans, according to the U.S. National Park Service, because of their heritage. Many leading Democrats and Republicans in California, and Nebraska, backed the incarceration of these individuals — two-thirds of whom were American citizens.

Shortly after her last dance program was highlighted in the local newspaper, Ichinaga, her parents, and her nine siblings were imprisoned by the federal government at the Fresno Assembly Center (Fresno Prison) located at the Fresno County Fairgrounds near the downtown of Fresno in central California. They were then transferred to the Jerome Relocation Center (Jerome Prison) in the rural area of Chicot and Drew Counties of Arkansas.

Ichinaga was able to get released from custody in Arkansas. She came to Scottsbluff for an education.

A number of people helped Ichinaga while she was in Scottsbluff. Dr. and Mrs. Harold Sandol housed her while she went to school at the former Scottsbluff Junior College, according to a news article dated Sept. 5, 1962, in the Tulare Advance-Register.

Other members of the Ichinaga family also arrived in western Nebraska. Some worked on area farms, and some worked at the Sioux Army Ordnance Depot in Cheyenne County.

She took a leadership role in efforts to advance equality, according to local news articles in Lincoln in 1947. In one news article, she was listed as chairman of a program committee where “We Must Be Equal” was presented.

In a letter dated Oct. 27, 1947, Ichinaga confirmed that “This campus didn’t (and still does not) accept foreign students or girls of minority groups in the University dorms. This is, of course, a great injustice to the integrity of the individual girls, but such talk was (and is) considered an irrational point of argument.” She continued describing this situation of injustice in her letter by noting that “For the first year, Negroes and Niseis (American citizens born to parents that had been born in Japan) and [foreign] students were not allowed to sleep in the 10-bed dorm on our third floor. Since then, there has been a tremendous improvement in the policies governing the house.”

Ichinaga married Warren Thomas, who met each other while students at the University of Nebraska. He became a Methodist minister. She became a teacher.

According to the Oregon-Idaho Conference of The United Methodist Church, The Rev. Warren Thomas “…served Echo, Sellwood, Ashland, Ashland/Talent and McMinnville in the Oregon Idaho Annual Conference; he also served as a missionary in Hawaii with the Pacific Southwest Conference. Pastor Thomas retired in 1986.” He died in 2002.

A personal injustice that had been done to Ichinaga in 1942 was rectified in 1992. John Napier III went to the same high school as Ichinaga, and he served the country in the U.S. Marine Corps. Then living in Ramer, Alabama, in 1999, Napier wrote a letter to the editor of the Montgomery Advertiser on Dec. 5, 1999, that detailed the situation when “...my 1942 class valedictorian, Dorothy Ichinaga, could not attend graduation.”

She was unable to attend the graduation ceremony as the top academic student because she was incarcerated at the Fresno Prison at that time. The Advance-Register reported on Dec. 16, 1992, that Ichinaga finally received her diploma from Tulare Joint Union High School in October of 1992.

At least one local Japanese American resident was educated at the former Scottsbluff Junior College during the World War II years. Lillian Kazuko Hashiba lived in the area. She went to school in Lyman and was the student with the highest skills in shorthand — 60 words per minute, according to The Wildcat’s Wow Page in the edition of The Lyman Leader dated Dec. 19, 1940. A news article in the same newspaper a couple months later — on Feb. 6, 1941 — indicated that Hashiba was on the first semester Honor Roll at the (former) Lyman High School.

Hashiba then went to school at the former Scottsbluff Junior College. According to the University of Nebraska at Lincoln, Hashiba continued her education at that university.

At some point, she married Thomas Trimble. In 1956, she was living in Cleveland, Ohio. The Pacific Citizen reported that she was secretary of the Cleveland Chapter of the Japanese American Citizens League at that time.

In addition to these two Japanese American women who attended the former Scottsbluff Junior College during World War II, several other Japanese American men imprisoned by the federal government were also students at this college and then joined the U.S. military; the lives of those men are highlighted in part five of this news series. Beyond these students, other members of the Ichinaga family and at least two other individuals imprisoned by the federal government also came to Scottsbluff. Details about the lives of Joe Atsushi Naritoku and Mabel Chizuko Miyagishima are noted below.

Joe Atsushi Naritoku was born in La Puente, California, as an American citizen on July 14, 1914. He and his family were initially imprisoned by the federal government at the Santa Anita Assembly Center (Santa Anita Prison) that was located at the site of the Santa Anita Racetrack in Los Angeles County, California. They were then transferred to the Rohwer Relocation Center (Rohwer Prison) in Desha County, Arkansas.

Federal records indicated that Naritoku was in Japan for between six months and one year when he was more than 20 years old. He could read, speak, and write English, Japanese and another unnamed language.

On Dec. 12, 1942, The Rohwer Outpost reported that “Joe Naritoku and Ichio Nakatani of Block 13 gave a special party in honor of nine visiting soldiers. About 100 persons enjoyed the entertainment, dancing and refreshments.” The Rohwer Outpost was the prison newspaper at this site.

About 18 months later, on May 3, 1944, the same newspaper, reported that Naritoku left prison for Scottsbluff on April 28, 1944. It is not certain what he did when he arrived in western Nebraska; he returned to California in 1946.

Naritoku was able to join his family as they returned to their farm in Fountain Valley in Orange County, California, according to his daughter-in-law, Leslie Leong Naritoku. She said that the Naritoku family moved to a farm in Garden Grove, a nearby community in the same county, in 1950.

Mabel Chizuko Miyagishima was born in Scottsbluff on Sept. 17, 1920. She moved with her family to Stockton, California, prior to World War II.

During the war, she and her family were first incarcerated in the Stockton Assembly Center (Stockton Prison), located at the site of the San Joaquin County Fairgrounds near downtown Stockton, California. The Miyagishima family were then transferred to the Gila River Relocation Center (Gila River Prison; also known as the Rivers Relocation Center – the Rivers Prison) on the lands of the Gila River Nation in central Arizona.

According to federal records, the government used “Miyagishim” as the spelling for her surname and “Chizuko” as his first name; the middle initial listed was an “M”. Those same records indicated that she never traveled to Japan and could read, speak, and write both Japanese and English.

On Feb. 22, 1944, the Gila News-Courier (the prison newspaper) reported that Mabel Miyagishima (the surname was misspelled as “Miyogishima” in this news article) was to leave the Gila River Prison in Arizona two days later on Feb. 24 to go to Scottsbluff.

It is not certain if she went to school at Scottsbluff Junior College. Two years earlier, El Joaquin, the prison newspaper at the Stockton Prison, detailed that Miyagishima was one of several people at the prison who worked as an employee to maintain family records of the inmates.

Five men with Japanese heritage were imprisoned by the federal government during WWII. They went on to serve in the U.S. military.

Joe Atsushi Naritoku (in the front row in a blue print shirt) at his 90th Birthday Celebration. Naritoku was one of the Japanese Americans imprisoned by the Federal Government because of his heritage. He was released to come to Scottsbluff. After a short time in western Nebraska, Mr. Naritoku went back home to a suburban area of Metropolitan Los Angeles. (Leslie Leong Naritoku, 2004.)