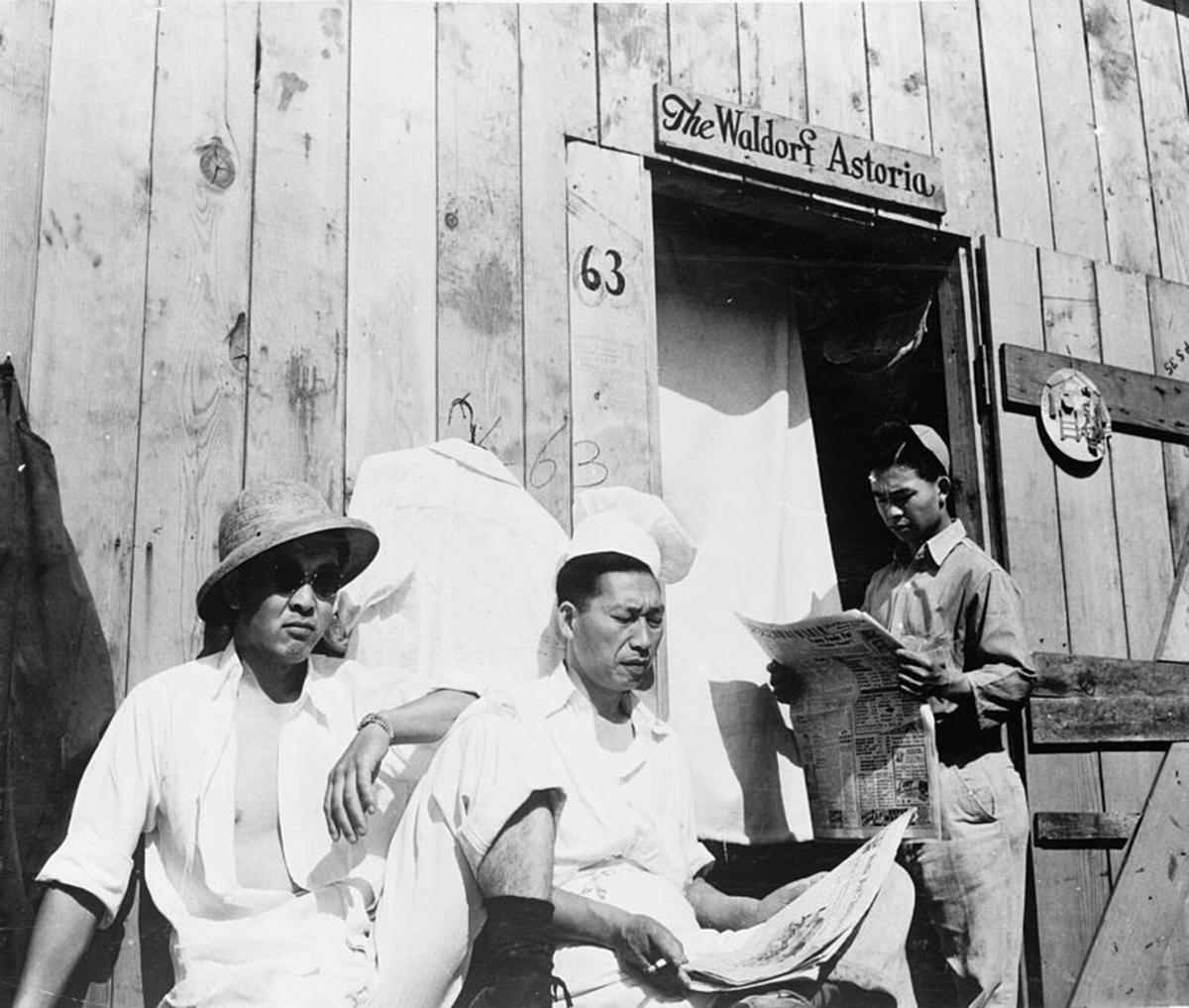 Three Japanese American prisoners are seen here “…sitting by a wooden building with the words ‘The Waldorf Astoria’ written over the doorway,” according to the caption for the photo. The locale was the Puyallup Assembly Center (Puyallup Prison) in the State of Washington. Four other men (not pictured) who came to Scottsbluff were also incarcerated at the Puyallup Prison: Frank Fukumi Ashida, James Haruso Ashida, Roy Kumasaka, and John Okada. 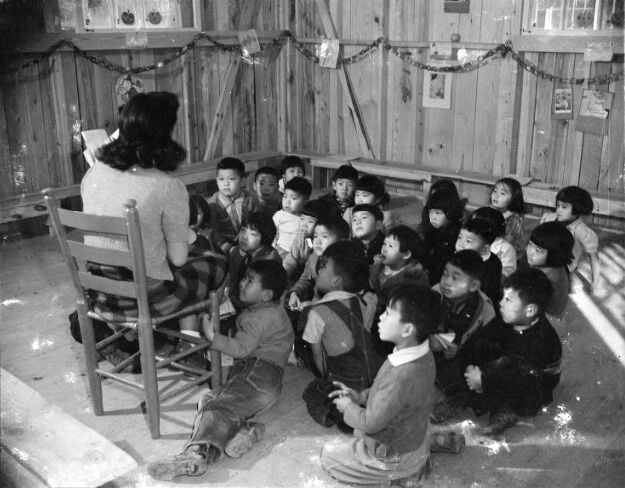 Shigeko Tabuchi is seen here teaching a Kindergarten class in barracks 35-4F at the Rohwer Relocation Center (Rohwer Prison) in Desha County, Arkansas. Atsushi Joe Naritoku, one of the Japanese Americans who came to Scottsbluff, was taken into custody in California and imprisoned at the Rohwer Prison.

With the stroke of a pen, the president of the United States of America authorized, among other things, the imprisonment of about 112,000 American citizens and residents of this nation due to racial policies. These individuals were held in horse stables and in prisons behind barbed wire, not because they committed a crime. No, instead they were taken into custody because of their Japanese heritage.

The president was Franklin Delano Roosevelt. The date was Feb. 19, 1942. The country was now an active participant in World War II. Japan had bombed Pearl Harbor and had invaded the Philippines, controlled by the U.S. which possessed military bases there, among other locations throughout East Asia and the Pacific Ocean.

Even prior to the issuance of Executive Order 9066 by President Roosevelt, other Japanese Americans were imprisoned by the United States of America. Within hours of the sinking of the USS Arizona in Hawaii, the federal Bureau of Investigations (FBI) arrested more than 1,000 Americans of Japanese heritage.

One of those arrested was an Episcopal priest in North Platte. He was the only American arrested in Nebraska at the time by the FBI, according to The Episcopal Church.

The leadership of this country – and substantial portions of the population – saw Japanese Americans – not simply the Empire of Japan – as the enemy. There was fear that Japanese-born residents of western states as well as American citizens with Japanese heritage living along the Pacific coast would attack the United States from within the country. While some made a distinction between “residents of the United States born in Japan” and “American citizens with Japanese heritage,” most did not. At that time, people born in Japan were prohibited from becoming American citizens.

“One of the most stunning ironies in this episode of American civil liberties was articulated by an internee who, when told that the Japanese (Americans) were put in those camps for their own protection, countered ‘If we were put there for our protection, why were the guns at the guard towers pointed inward, instead of outward?’” according to a quote provided by The United States National Archives and Records Administration.

The United States was also fighting Germany and Italy, as well as other Axis nations, yet Japanese Americans were treated differently than citizens and residents with heritage from other nations at war with the United States. Both Germany and Italy had substantially more nationals living in the U.S. than Japan did during World War II. There were far more American citizens with German or Italian heritage than those with Japanese heritage. Yet far fewer Americans with German and Italian heritage were imprisoned by the federal government.

With a few deferments, according to the Final Report: Japanese Evacuation From The West Coast – 1942, written by War Department (today’s “Defense Department” and published in 1943, no one of Japanese heritage was allowed to remain in their homes or operate their business in Military Zone 1 as well as in almost all of Military Zone 2 in California.

According to the National Park Service, the federal government imprisoned anyone with 1/16 or more Japanese blood from these military zones.

“From the end of March to August (of 1942), approximately 112,000 persons were sent to ‘assembly centers’ – often racetracks or fairgrounds – where they waited and were tagged to indicate the location of a long-term ‘relocation center’ that would be their home for the rest of the war,” according to The United States National Archives and Records Administration. “Nearly 70,000 of the evacuees were American citizens. There were no charges of disloyalty against any of them, nor was there any vehicle by which they could appeal their loss of property and personal liberty.”

Other reports indicate that people imprisoned by the federal government because of their Japanese heritage numbered approximately 120,000 persons.

Most of the Japanese Americans were imprisoned for about three years.

At the time – and for years afterward – it was stated that these individuals “volunteered.” That they were “evacuated” to “assembly centers” and then transported to “relocation centers” and “relocation camps.” The more accurate words to use – the words used in these news columns – are “taken into custody,” “incarcerated” and “imprisoned.”

President Gerald Ford on Feb. 19, 1976, in part of a Presidential Proclamation 4417, said, “I call upon the American people to affirm with me this American Promise — that we have learned from the tragedy of that long-ago experience forever to treasure liberty and justice for each individual American, and resolve that this kind of action shall never again be repeated.”

This presidential proclamation confirmed the termination of the executive order authorizing the imprisonment of Japanese Americans during World War II.

In 1988, after years of study and debate, the United States Congress and the then President of the United States, Ronald Reagan publicly apologized to Japanese Americans for the actions taken during World War II. Reparations in the amount of $20,000 were paid to each of the more than 82,000 individual Japanese Americans still living who had been imprisoned by the federal government from 1942 to 1945.

Japanese Americans living in Scottsbluff, Gering, Mitchell, Morrill and other communities throughout western Nebraska were largely unaffected from the direct actions of the federal government. This was partly a matter of geography, because of relationships developed with Americans of other ethnicities in the region, due to actions taken by local business and educational officials, and because of sugar beets.

That does not mean some of the local Japanese American folks weren’t directly affected, nor does it mean that large numbers of Japanese Americans living in western Nebraska did not have family members affected by these events in other states.

While the incarcerations were still underway during World War II, some of the imprisoned Japanese Americans were able to be released from these prisons to receive an education, go to work in schools and hospitals or join the U.S. military, among other reasons.

Some of the imprisoned Japanese Americans were released to come to Scottsbluff and western Nebraska.

Five men with Japanese heritage were imprisoned by the federal government during WWII. They went on to serve in the U.S. military.

Three Japanese American prisoners are seen here “…sitting by a wooden building with the words ‘The Waldorf Astoria’ written over the doorway,” according to the caption for the photo. The locale was the Puyallup Assembly Center (Puyallup Prison) in the State of Washington. Four other men (not pictured) who came to Scottsbluff were also incarcerated at the Puyallup Prison: Frank Fukumi Ashida, James Haruso Ashida, Roy Kumasaka, and John Okada.

Shigeko Tabuchi is seen here teaching a Kindergarten class in barracks 35-4F at the Rohwer Relocation Center (Rohwer Prison) in Desha County, Arkansas. Atsushi Joe Naritoku, one of the Japanese Americans who came to Scottsbluff, was taken into custody in California and imprisoned at the Rohwer Prison.