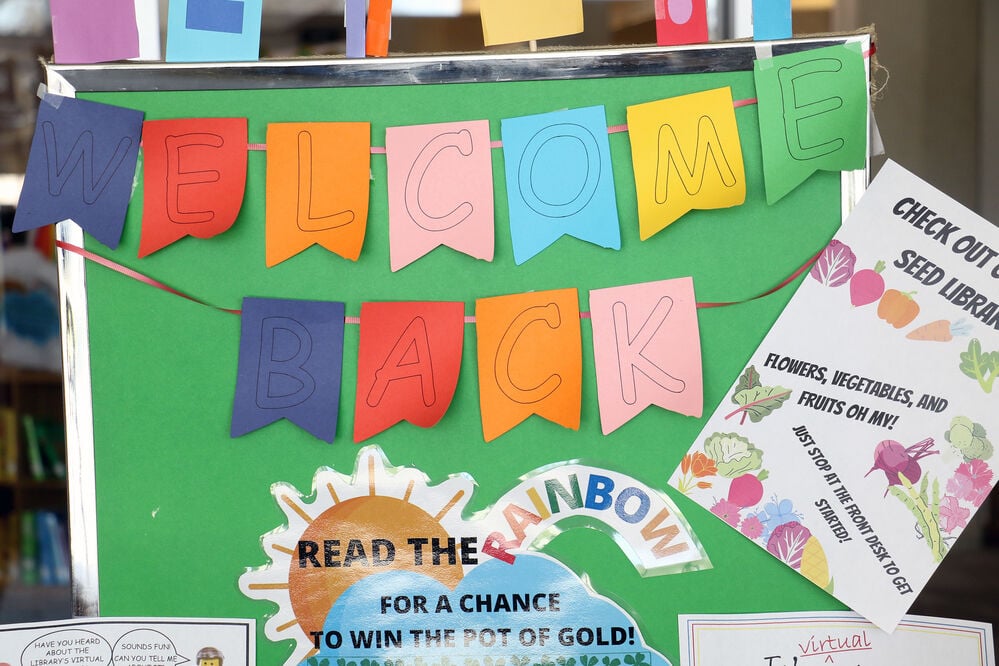 The Lied Scottsbluff Public Library has a sign in their foyer welcoming its patrons back to the library for in person programming beginning Monday, April 5. Storytime, book club, Lego club and even a poetry event to celebrate National Library Week and National Poetry Month will all be in person. 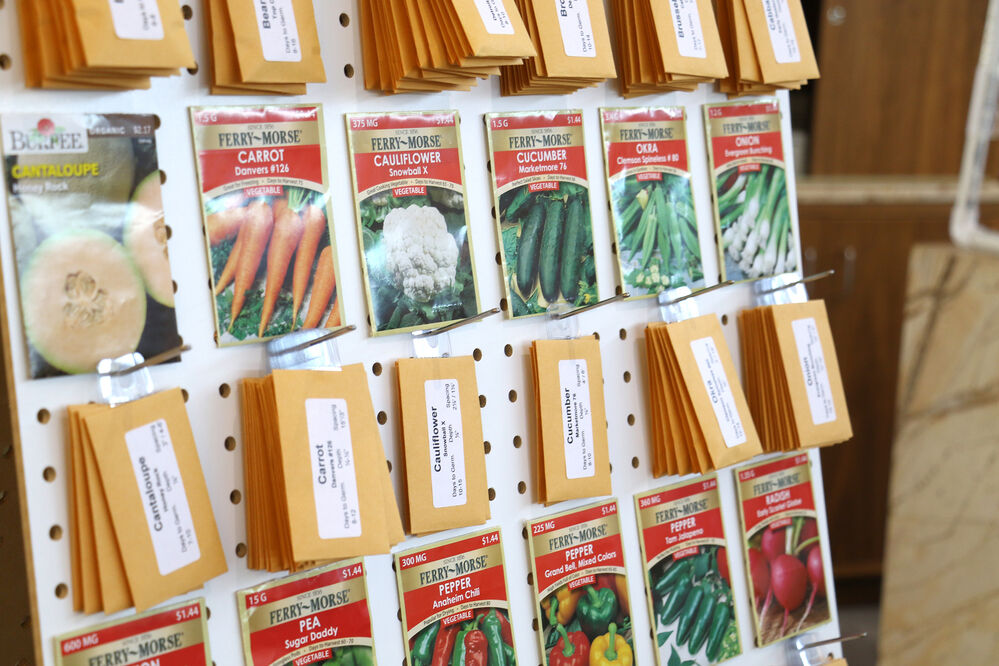 The Scottsbluff library started up a seed library program a little over a week ago. Patrons can come in and take packets of seeds for various vegetables, fruits, flowers and herbs and donate seeds that they do not plan to use. The goal is to make the seed library self-sufficient on patron donations to create a community atmosphere of helping and sharing with one another.

After over a year of virtual programing, the Lied Scottsbluff Public Library is ready to fully open its doors and celebrate spring — and other upcoming events — with its patrons in person.

With vaccination on the rise and many other places starting to open up more, Library director Erin Aschenbrenner said she and the rest of the staff are ready to interact with patrons again.

“We just decided it’s time. We’re ready to have people back in the building,” she said. “We miss seeing the kids. We miss seeing our patrons. We miss having storytimes and book clubs. The virtual programming has been fantastic, and we’ve learned a lot from it. We’ve learned how to connect with our patrons in different ways, but we just miss being able to look people in the face and have an interaction.”

Aschenbrenner planned the opening two weeks after all her staff had gotten their first dose of the vaccine, since that’s when the CDC says protection starts to activate, she said. The library will also still be requiring masks and asking people to social distance.

However, beginning Monday, virtual programming will essentially be a thing of the past.

It just so happens that the library plans to begin in-person programming the week of National Library Week, giving them an opportune time for fun face-to-face activities. The theme this year is even “Welcome to Your Library.”

“(It’s) perfect — welcome back, come back,” Aschenbrenner said. “Total coincidence. We didn’t plan it that way. It was just a happy coincidence.”

National Library Week is an annual, week-long event celebrated across the globe to honor libraries, celebrating communities and the way they partner with the library, Aschenbrenner said.

The Lied Scottsbluff Library, along with the Friends of the Library, will have a few different events going on next week to celebrate, including a poet-tree activity, library-themed gift basket raffle and a poetry event on Saturday, April 10, with local poet Rae Whitney. April also happens to be National Poetry Month.

The poet-tree activity involves large paper trees on display in the library’s lobby with leaves for patrons to write on and stick to the tree. The idea is to write something about why the patron uses the library, what makes it special and any feedback on its services.

The raffle is for one adult basket and one children’s basket provided by the Friends of the Library, and patrons can fill out a raffle ticket every time they come in to the library. No purchases or book borrowing necessary. The winner will be drawn at the Saturday event, but you do not have to be present to win.

The Saturday program is called “Verses, Rhymes, and Excellent Times!” and will feature a video interview by Rae Whitney, a Q&A with the poet and a presentation on poetry in literature and at the library by library staff. The program will take place on April 10 at 2 p.m. at the library, and masks will be required.

Aside from all the library and poetry fun, the Lied Scottsbluff Public Library is working on starting up two other ongoing spring and summer programs for its patrons: an outdoor toy and activity bin for children and a seed library.

The outdoor toy bin is something that has been on Aschenbrenner’s mind for a while.

“We have a large group of teens and preteens that like to come in after school, and we don’t always have a ton of fun stuff for them to do. Of course, they can get on the computers, and they do their homework. … They can watch movies. And they can, of course, read books, check out books,” she said, “but they get restless, they’re kids; they need to be moving. We have this fabulous park out front, and it should be used.

“We don’t have a sports equipment collection or anything like that. So I thought, ‘Well, why don’t we just ask the community if they have anything they’d be willing to donate?’”

Aschenbrenner said they are taking donations for all kinds of toys, games and equipment for kids to use in the park in front of the library. If anyone has something they’d like to donate, they can just bring it to the front desk, and the staff will take it from there.

That goes for seed donations for the seed library as well.

The seed library idea stemmed from a search by library assistant Jill Winchell for some new programming ideas. She first noticed it from the Omaha library. Aschenbrenner said it’s becoming a popular program in the library sphere.

“Seed libraries are slowly cropping up in public libraries across the nation,” she said. “(Jill Winchell) came across it and she just went, ‘Wow, this is such a unique idea.’ … So I just jumped on board like, ‘This is fantastic, Jill, run with it, get a game plan set up, and we’ll make it happen.’”

It began with Winchell and Aschenbrenner going out to purchase various vegetable, flower and herb seeds and putting them in individual packets for patrons to take. It doesn’t cost anything, and all the library asks is you let the staff know which seeds and how much you take so they can keep track. The goal is to eventually make the library self-sufficient on seed donations from the public.

“So far, we’ve had really good response to it,” Winchell said. “It’s great for kids too because sometimes they just need a little pot of something to do and throw some stuff in and grow it.”

The seed library program began about a week and a half ago, and has already received overwhelming support from the public. The 23 packets of lavender that were put out are already in need of being restocked, Aschenbrenner said.

Winchell said she hopes that down the road it can spur another green thumb program at the library: a plant swap or crop swap.

“A plant swap is just you bringing plants that you have, and everybody just brings stuff in and you just swap and trade,” she said. “Then also with the crop swap, same thing — bring tomatoes, cucumbers, those kind of things, and then just kind of swap, share. Hopefully, we’ll be able to do something like that in the future.”

Until then, she hopes the community will continue to enjoy the seed library and feel free to take what they need and donate what they don’t.

The Lied Scottsbluff Public Library has a sign in their foyer welcoming its patrons back to the library for in person programming beginning Monday, April 5. Storytime, book club, Lego club and even a poetry event to celebrate National Library Week and National Poetry Month will all be in person.

The Scottsbluff library started up a seed library program a little over a week ago. Patrons can come in and take packets of seeds for various vegetables, fruits, flowers and herbs and donate seeds that they do not plan to use. The goal is to make the seed library self-sufficient on patron donations to create a community atmosphere of helping and sharing with one another.