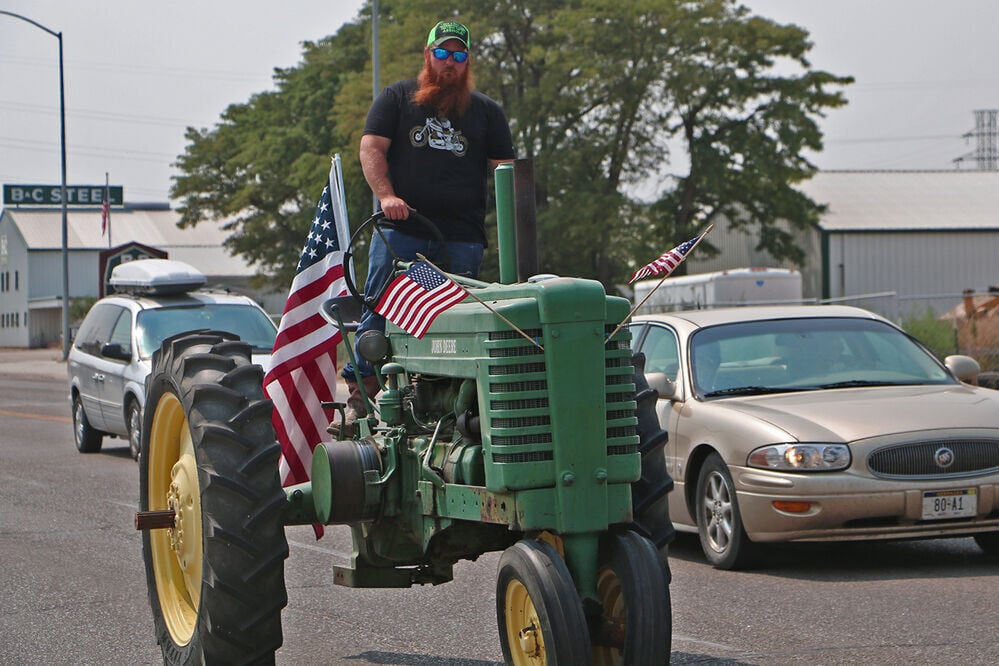 Nick Schultz drives his tractor through Gering on his way to Scottsbluff during the surprise Tractor Drive on Aug. 22, 2020. The tractor drive replaced the parade during the 2020 Oregon Trail Days, but the parade will return this year. (Olivia Wieseler/Star-Herald file photo) 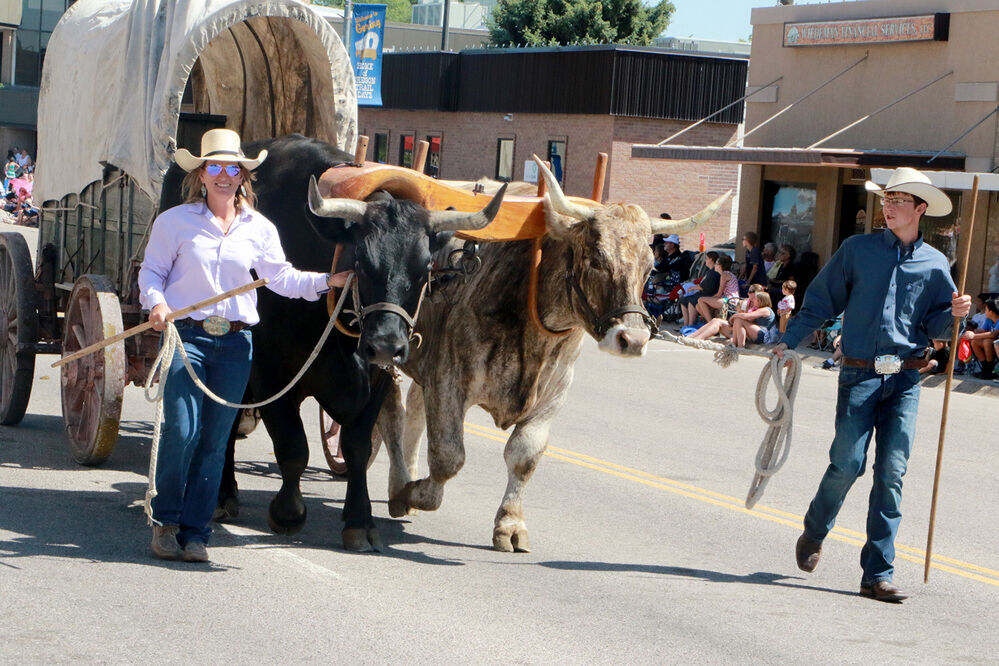 Two steers pull a covered wagon down 10th Street in Gering during the 2019 Oregon Trail Days Parade. The parade will return this year and will feature around 60 longhorns from Oklahoma.

The traditional second weekend in July event that celebrates local settlers who traveled the Oregon Trail is back full-fledged this year after the 99th Oregon Trail Days saw changes to events due to the pandemic.

“The governor has lifted the directed health measures, which made it difficult to have a parade last year,” Bill Peters, who is the general chairman for the Oregon Trail Days Association, said. “In fact, we couldn’t have a parade last year … It was necessary to do some parts of Oregon Trail Days last year, but not the traditional events that we’ve done so well in the past that have drawn in a lot of people.”

The Oregon Trail Days Board of Directors is excited to welcome the community back.

“We’re actually having a big time celebration this year,” Peters said. “We had a very small one last year because of COVID requirements.”

The carnival, parade, art show and sale, chili cook off, international food fair and rod and custom car show will return during this year’s Oregon Trail Days, July 8-11. The quilt show will return, but change locations as it will be held under the metal roofing where the Gering Farmers Market at the Gering city plaza.

“That’s a new location, but it is a traditional activity that is so well attended,” Peters said. “There have been remodeling and things like that have made it more difficult to have some things in the traditional location at one of the local churches.”

The Saturday parade will return down Gering’s 10th St. at 10 a.m. In celebration of the centennial, the parade will feature music performed by local marching bands, longhorns and floats, vehicles transporting local officials and the traditional stagecoach, which will transport the governor, if he attends. Peters said Gov. Pete Ricketts attendance has not been confirmed yet.

“A big, special thing we’re going to have is right around 60 longhorn cattle being led down the street,” he said. “People can marvel at these giant animals with giant horns.”

The longhorns are coming from Oklahoma and have made appearance during previous Oregon Trail Days celebrations.

Parade registration and line up begins in the Gering High School parking lot at 8 a.m. Saturday. There is no entry fee. This year’s parade theme is "Celebrating 100 years of our legendary past."

Peters said the board looks to operate a safe event and asks parade spectators to remain on the sides of the street during the parade. Parade participants are also reminded no candy can be thrown.

“It presents a potential safety hazard and we don’t want that,” he said.

As the board prepares for the 100-year celebration, Peters wants the community to understand how Oregon Trail Days originated.

“Oregon Trail Days began as a result of people wanting to celebrate and honor the people who are descendants from people who came through and settled this area being on the Oregon Trail,” he said.

The celebration started as picnics before morphing into the current event.

To pay tribute to the settlers, the Old Settlers luncheon highlights families who have lived in the valley for 50 years, known as half-century descendants. The luncheon takes place Friday and Saturday at the Gering Civic Center.

“We’re certainly glad that we’re going to be back doing the big activities we’ve done before,” he said. “We welcome everybody.”

A Scottsbluff man accused of sexually assaulting a paramedic student during training is scheduled to be tried on charges in August.

After 10 years, the beating death of a Scottsbluff man remains unsolved. Even after all this time, Scottsbluff Police are hopeful someone will…

The Nebraska State Patrol has released that Trooper Nicholas Goodwin died Thursday. Goodwin was found early Thursday afternoon inside his patrol vehicle, outside the NSP office in Scottsbluff, with an apparent self-inflicted gunshot wound.

Kuldip “Cheema” Singh will serve four months in jail and has been ordered to pay more than $6,000 in costs after being convicted on liquor law violations.

The Star-Herald editorial team has new members and changes to positions.

Center Avenue in Mitchell was lined with people Saturday as the Scotts Bluff County Fair Parade was held.

The Nebraska Department of Health and Human Services could be relocating its Gering offices. The state opened requests for proposals Wednesday morning in Lincoln as it considers its options.

Nick Schultz drives his tractor through Gering on his way to Scottsbluff during the surprise Tractor Drive on Aug. 22, 2020. The tractor drive replaced the parade during the 2020 Oregon Trail Days, but the parade will return this year. (Olivia Wieseler/Star-Herald file photo)

Two steers pull a covered wagon down 10th Street in Gering during the 2019 Oregon Trail Days Parade. The parade will return this year and will feature around 60 longhorns from Oklahoma.