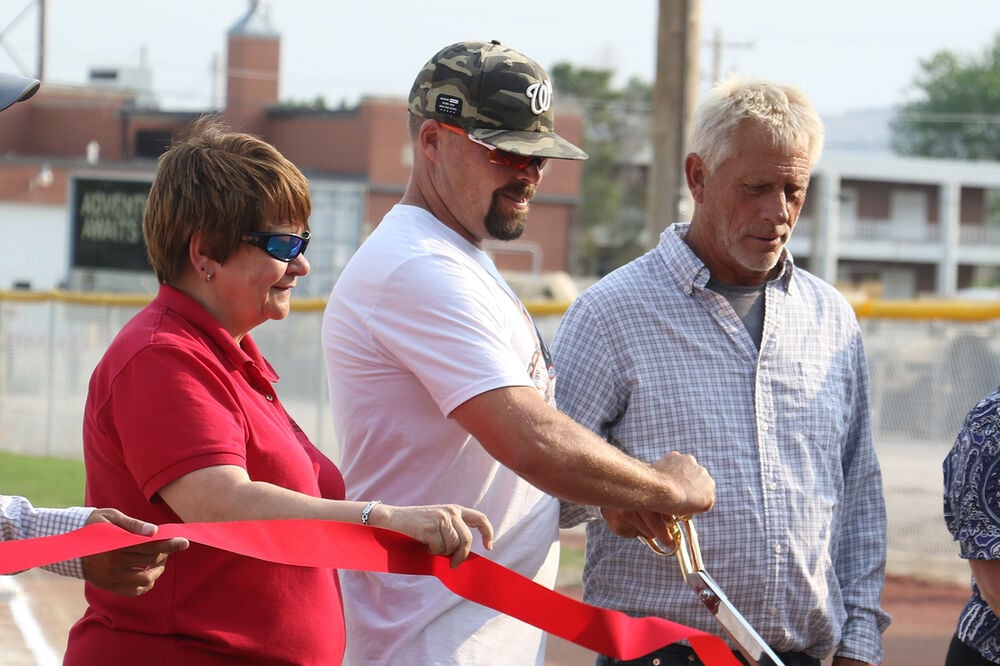 Geoff Nemnich, 23 Club president, cuts the ribbon across homeplate at the new 23 Club Complex alongside Karen Anderson (left) of the Scottsbluff/Gering Chamber of Commerce and Mark Bohl (right) public works director, as well as other project workers and city officials. 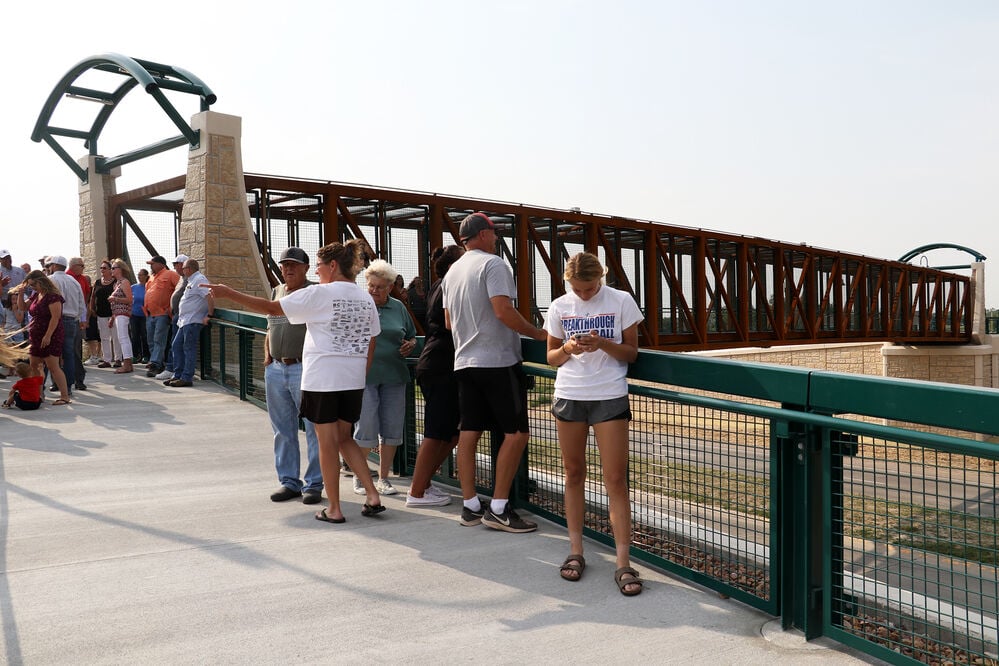 The first of the celebrations took place at the north end of the Monument Valley Pedestrian Bridge, the final piece to the Scottsbluff’s part in the 6 mile Monument Pathway project. Dan Marshall, parks, cemetery and tree board chairman, said the entire project started out as the vision of one city employee 12-13 years ago.

“It was a vision Perry (Mader) had,” he said about current Mitchell city manager Perry Mader. “I had some emotion (during the ribbon cutting). I truly did. I was thinking of all the people that worked on it, behind it. … Perry was the key, and what a super guy he is. Personally, I was thinking of Perry and how he started all of this … but I would have loved to have Perry stand up beside me.”

Marshall said he was pleased with the way it turned out, and he looks forward to utilizing it with his family.

“I’m going to bring my family and grandkids here, bring their bikes. They’re ready to roll,” he said. “They just can’t wait to go across.”

Scottsbluff economic development director Starr Lehl said she was pleased with the turnout for the ceremony.

“There’s been a lot of anticipation,” she said. “It’s a really addition to the pathway.”

Following the bridge ribbon cutting, the crowd made its way down to the newly renovated 23 Club Complex where a second ribbon cutting was held to officially open up the complex for baseball.

Before 23 Club president Geoff Nemnich took ahold of the giant pair of scissors to cut the ribbon, Scottsbluff Mayor Jeanne McKerrigan shared a few words of thanks and support for all the individuals who made the project possible.

“I would like to say thank you to all of the city employees, especially Mark Bohl, that had worked on this project, along with Paul Reed Construction, as well as Geoff Nemnich, the 23 Club president,” she said. “We couldn’t have done this without them. And also for all of you as parents that have helped raise money for this. What a great experience.”

After they pitched their baseballs to catchers from various 23 Club teams and the singing of the Star-Spangled Banner by Scottsbluff High School Student Elizabeth Fuss, it was time to “play ball!”

Free hotdogs, chips and pop were offered to celebrate.

Marshall said he was pleased with how both projects turned out, but he is already looking forward to what’s next.

“There’s other things in the works that are just going to surprise people, that I don’t even know about,” he said. “… There’s excitement in the city.”

Geoff Nemnich, 23 Club president, cuts the ribbon across homeplate at the new 23 Club Complex alongside Karen Anderson (left) of the Scottsbluff/Gering Chamber of Commerce and Mark Bohl (right) public works director, as well as other project workers and city officials.