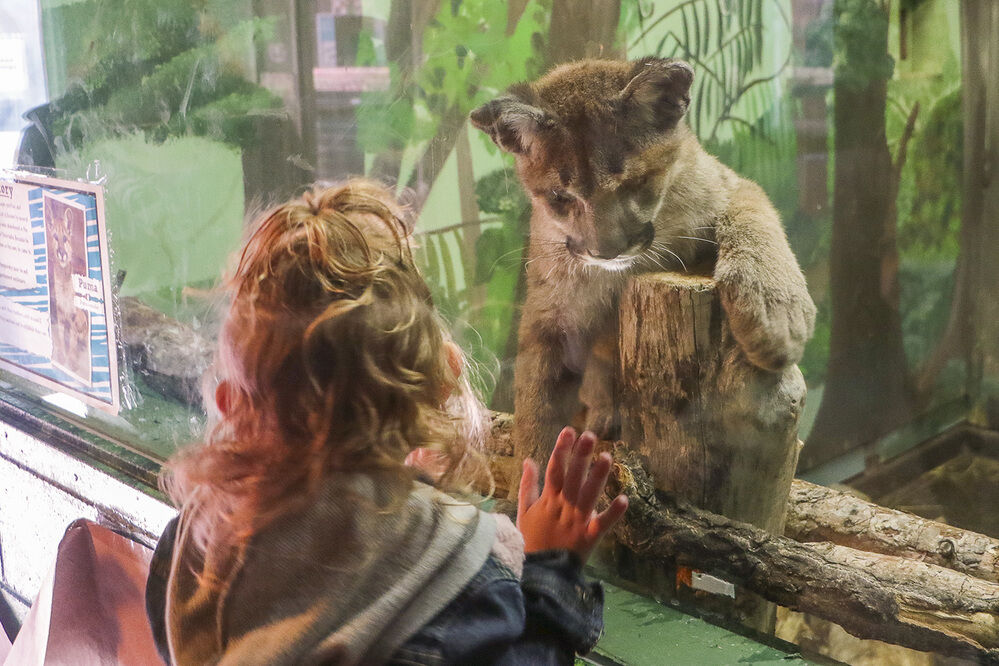 A puma cub greets a visitor at the Riverside Discovery Center on Friday, Dec. 3. The zoo recently received a second puma cub. 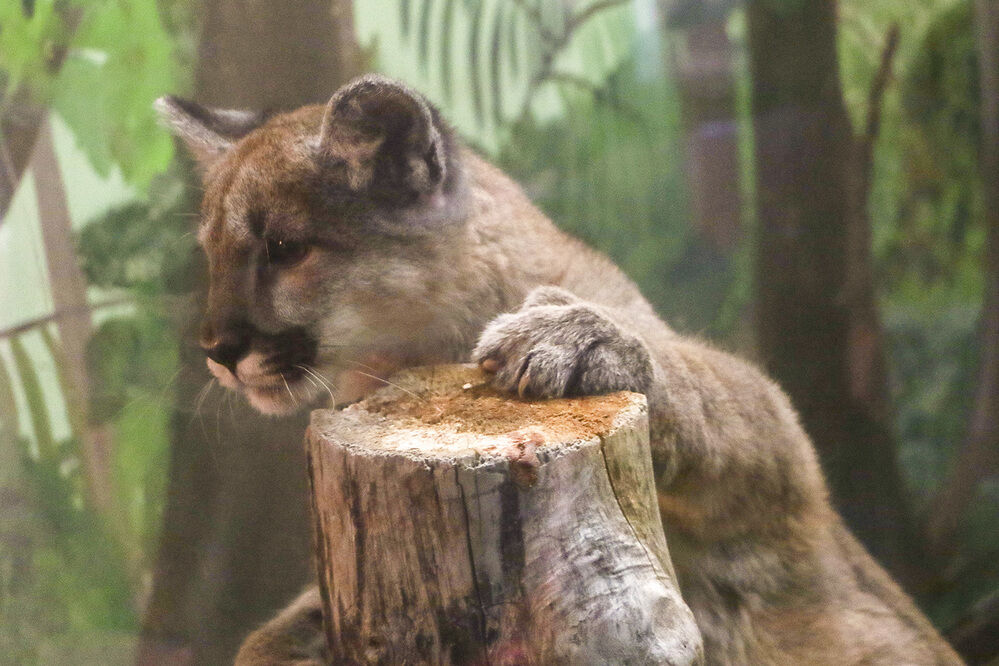 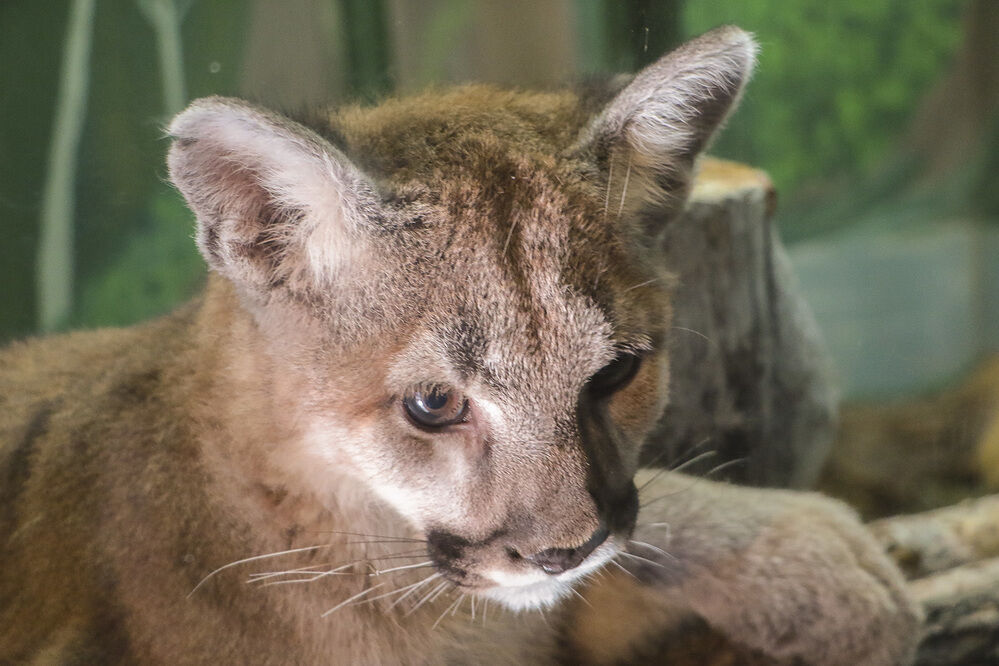 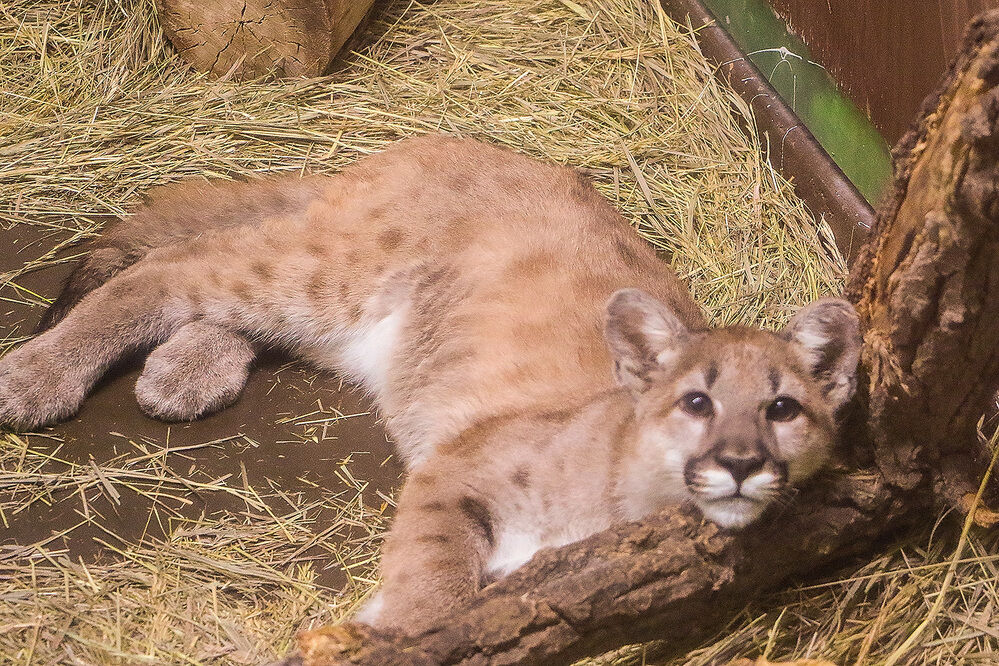 Riverside Discovery Center’s puma cub now has a friend after acquiring a second puma cub that was found abandoned in Montana.

The species coordinator who helped the zoo get the first cub was notified of a second puma cub that needed a new home.

“It was taken in by (Montana’s) Wildlife Service,” zoo director Anthony Mason said. “It also had been found on somebody’s porch. We were connected with their Wildlife Services. We coordinated to meet up and bring (the cub) here to our facility.

“The thought is if we can take a second one it keeps more space available for the next one that comes up down the road. ... We wanted to give this one a friend. A year down the road, it would have been a lot harder (to get them to bond).”

Mason said he isn’t sure how the cub came to be abandoned.

“There’s no reported death of mom. That can be something that’s hard to determine. They’re not sure (why the cub was abandoned), but they know she wasn’t anywhere in the area. She couldn’t be found. It seemed like the cub was ... out for a while away from mom. You can kind of tell as they start to look skinny. They can’t really hunt on their own.”

Mason said he was thrilled to have added the second cub.

“I was shocked (when I was notified). I did not see it coming,” he said. “We were waiting for a long time for the first one. We had been on the list for a while. When it finally came up, it was surprising enough at the time, and to then all of a sudden have a second one. Right, back to back. You know, so that old you know, expression when it rains it pours.

Mountain lions can be solitary animals in the wild if there’s an abundant supply of food, Mason said.

“In captivity, it can be very helpful for them to have a friend, it’s enriching,” he said, “As long as they’re together young enough and growing up together, they will cuddle and hang out with each other. It can actually be very enriching for them to have a buddy, essentially. But it has to happen, when it typically has to happen when they’re younger. Yeah. And so the fact that this one came up so close, and was so close in size, it was a good opportunity to introduce them to each other now, while they’re still young.”

As luck would have it, the new puma cub is also around six months old. Mason said they use biology such as growth rates and fading spots to help determine the approximate age of the cubs, he said.

Mason said he is excited to have two puma cubs.

“We’re really excited. This is a fun opportunity for folks to learn about mountain lions, and why it’s important to our ecosystems to have these apex predators, They help keep ecosystems in balance,” he said. “It’s great for people to be able to see them up close, and gain that appreciation.”

The new cub is currently in quarantine to monitor its health. After getting its vaccinations, but will soon be introduced to the first cub the zoo took in.

“What we’re going to be doing soon is moving number one over to an outdoor area. As this one comes out of quarantine, we’re going to put it over in that same space. We have a side-by-side enclosure with a holding area next to it where they’ll be able to interact through the mesh and smell each other. Given their age, we’re not really expecting a lot of issues but we’ll let them interact through the mash for a couple days first and then we’ll actually put them together,” Mason said.

Mason said they were about to start a contest to name the first cub, but has postponed it.

“We were about to do the naming contest a little while ago for the first one. When we found out about the second one, we decided to wait. We thought it would be better to have the options take into account for the fact that there’s two of them,” he said.

Riverside Discovery Center’s new puma cubs have been moved to their permanent enclosure.

After a few weeks in quarantine, Riverside Discovery Center’s new puma cubs have been moved to their permanent enclosure.

A puma cub greets a visitor at the Riverside Discovery Center on Friday, Dec. 3. The zoo recently received a second puma cub.