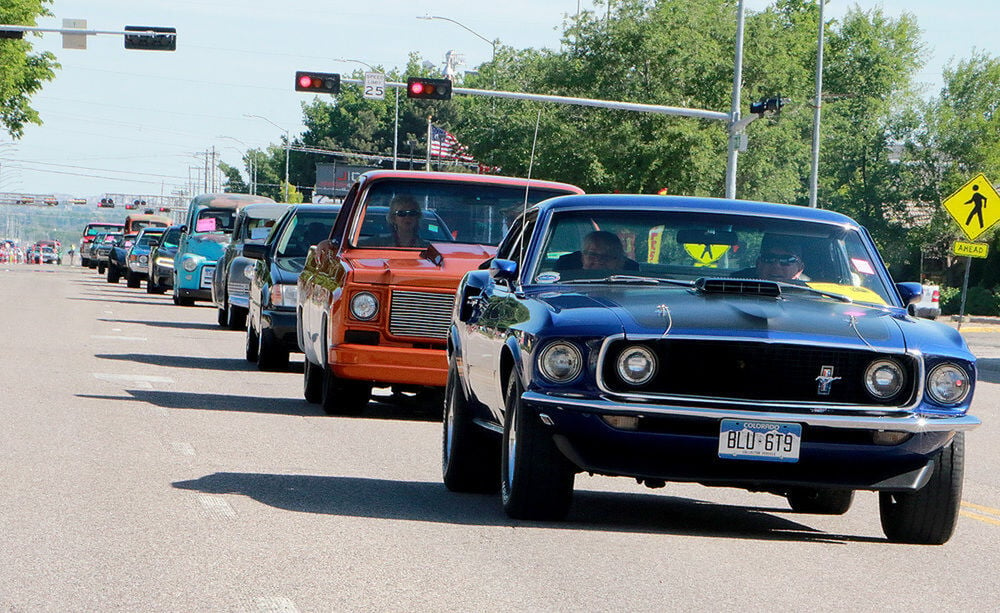 Cars around the valley and in neighboring states rolled through Gering during the 2019 Father's Day Classic Saturday morning parade. Vehicles headed to Five Rocks Amphitheater following the parade. 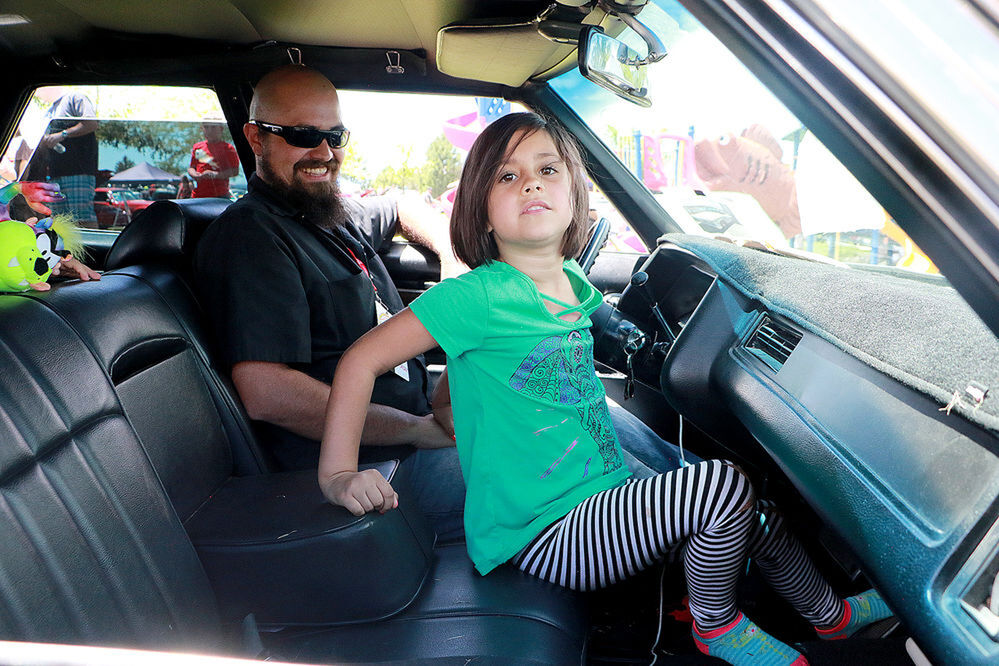 Six-year-old Alba Feil of Gering pushes the gas pedal on her dad, Tyler’s 1969 Pontiac Bonneville during the 1 p.m. car revving at Five Rocks Amphitheater for the Father's Day Classic Car Show in 2019. The two-day event will return this weekend.

Classic and custom cars will cruise the streets of downtown Gering as the Rock-N-Roll Father’s Day Classic returns June 18 and 19.

After last year’s event was canceled to protect participants’ and spectators’ welfare, the High Plains Auto Club is excited to welcome the community back for this fun, free event now in its 22nd year.

Loren Hoatson, who is the car show chairman for the club, anticipates this year’s show will feature around 325 vehicles.

The Father’s Day Classic is a dual-purpose event, focused on supporting youth’s educational endeavors and bringing the community together, Wills said.

“First of all, our main emphasis is to raise money for scholarships for students who are getting into automotive, both mechanical and body work,” Wills said. “Beyond that, it’s to bring people out with their classic cars, give them a chance to show their cars, to have the camaraderie they have and to bring people into our community to showcase our valley and all the amazing things we have in western Nebraska.”

The Father’s Day Classic is a two-day event, starting Friday, June 18 with a barbecue at the Gering Civic Center, followed by a cruise for cash and an ice cream social. Registration is open from 2 to 5 p.m. at the Civic Center. Hoatson said anyone interested in showing a vehicle at the car show must be registered by 10 a.m. Saturday as the club members shift their focus to counting votes.

“We have a cruise for cash and as part of that there is a barbecue that participants get to partake of,” he said. “There’s almost $3,000 in cash that we give out by pulling a ticket out of a bucket and then we give them an envelope.”

There are also over $10,000 worth of door prizes up for grabs. Show participants will receive a ticket in their goodie bags during registration used for the door prizes.

After the cruise, participants are welcomed back to the Civic Center for an ice cream social to wrap up the evening.

On Saturday, show participants can start to line up for the downtown parade at 8 a.m. on N. 10th St. Participants who wish to park together at Five Rocks are asked to line up together in the parade. The parade will begin at 9 a.m. heading down 10th St. No candy can be thrown during the parade as per Gering city ordinance.

Following the parade, the public is invited to get an up close look at the vehicles during the car show at Five Rocks Amphitheater. The car show is from 10 a.m. to 4 p.m.

Hoatson said he enjoys seeing the work people put into their vehicles.

“You can’t believe the things these people go through to make it like original or as close as they can to original,” he said. “It’s nice to see somebody do something that goes back to exactly or better than what it was when it came out of the factory.”

Hoatson said he hopes spectators enjoy the car show as the vehicles bring back childhood memories.

“I hope they enjoy seeing these old cars their dads, granddads or maybe their uncles had when they were young,” he said.

He also hopes the event attracts the younger generation of car enthusiasts and inspires them to hold onto their vehicles to showcase to future generations as others have done before them.

“We want to see those younger people in there and hopefully they will see the value in keeping a car they have now for future generations, just like some of these guys are showing their ‘50s, ‘60s and ‘70s cars now,” Hoatson said. “Some of those guys kept those cars all these years and I hope that that can happen to some of these younger people.”

Voting ballots must be returned to the registration table by 1 p.m. Saturday. There will be an awards banquet for show participants that evening at 7 p.m.

“We have scholarships that we give away to young students just out of high school to go to WNCC or another college in the area to promote anything to do with cars like mechanics, body work, and diesel,” he said. “We spend about $5,000 a year doing that for the different scholarships.”

The car club asks participants and spectators to be respectful toward others by wearing a mask if they are ill, keeping a safe distance and being conscious to wash their hands. Spectators are also asked to be mindful of children during the parade and no animals are allowed at the car show to avoid damage to the vehicles.

“We hope this event brings families together and allows them to spend time together and enjoy the car show,” Wills said.

Despite a rough start, 2-year-old River Corbit won’t let life knock him down

Two-and-a-half-year-old River Corbit of Gering loves to play with his two older sisters, whether that is jumping on the trampoline, building p…

ASK A COP: Can I report vehicles parked in front of my home?

Q. Can you have a boat, camper, trailer parked on the street if it is not hooked up to any kind of vehicle? Can expired plates or non-running …

Cars around the valley and in neighboring states rolled through Gering during the 2019 Father's Day Classic Saturday morning parade. Vehicles headed to Five Rocks Amphitheater following the parade.

Six-year-old Alba Feil of Gering pushes the gas pedal on her dad, Tyler’s 1969 Pontiac Bonneville during the 1 p.m. car revving at Five Rocks Amphitheater for the Father's Day Classic Car Show in 2019. The two-day event will return this weekend.