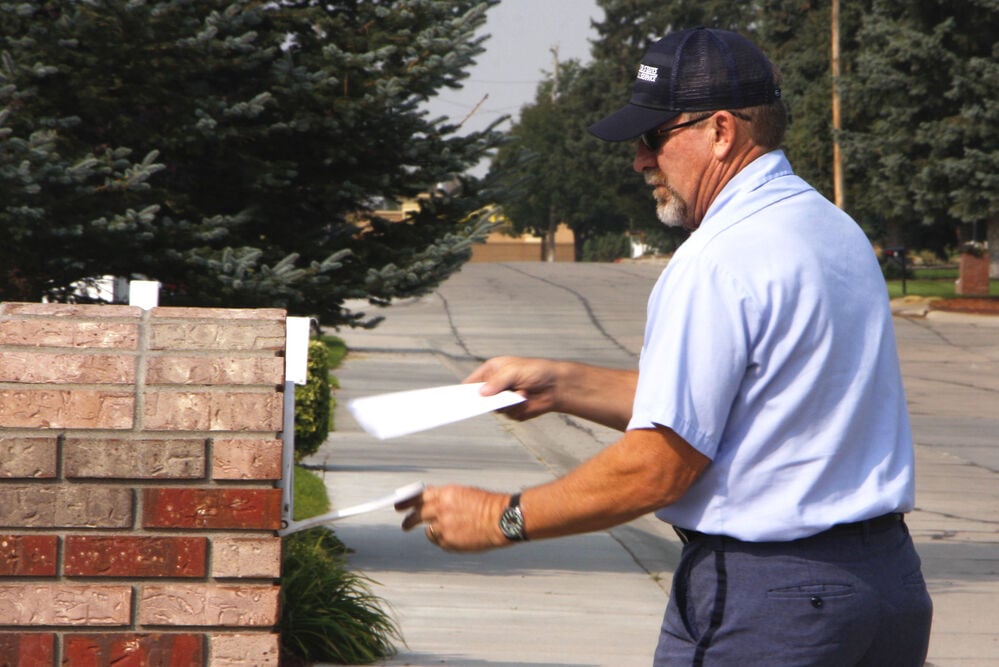 Dan Kihlthau delivers mail on one of his routes on Sept. 18. He's been on the city 11 route for about 14 years. The route he had before that was city 4 for five months. His first route was primarily an all walking rout and he had it for 18 years. 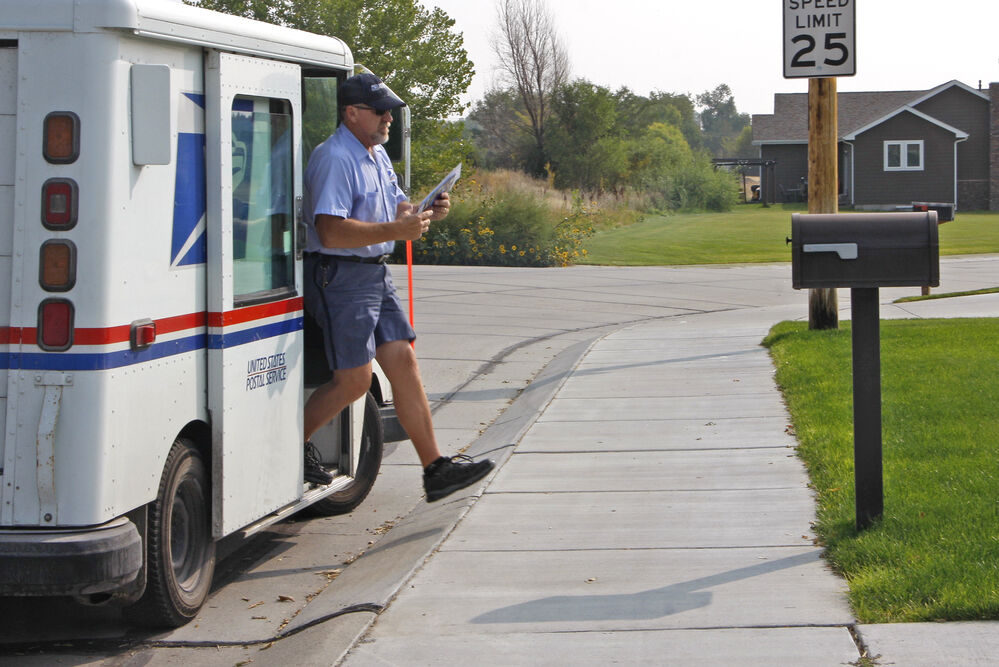 Kihlthau steps out of his mail truck to deliver mail on Sept. 18. He said that getting in and out of his truck, along with the large amount of walking he has done on the job, is probably related to his many knee problems over the years. It's a hard job, he said, but "someone's got to do it."

Kihlthau is one of the few people who actually fulfilled his childhood dream job. When he was a kid, he said, he would look out the window at the mailman delivering mail across the street and think, “That’s what I want to do.”

He began his path toward his career back in 1981 when he was around 20 years old, filling in for other mail carriers on the rural route around Bayard. After about a year and a half, some family friends told him to move down to Phoenix, Arizona, where they seemed to hire mail carriers all the time. So Kihlthau headed to Arizona.

In order to become a full-time mail carrier, Kihlthau had to take a specific test. Out of the 12,000 that took the test in Phoenix, Kihlthau scored in the top 5%.

While he waited for the post office to hire him, he worked at the IRS. The Phoenix Post Office hired him on June 22, 1985, about eleven months after he took the test. He began on a probation period in which he had an on-job instructor follow him on his routes to make sure he knew what he was doing. It wasn’t long before he began taking on over 60 routes a day.

“I’ve never had a problem casing mail because my memory apparently just works,” he said. “It was just never hard for me, and that sounds bad, but it just wasn’t.”

While in Phoenix, he experienced mean dogs, a mean rooster, a roll-away mail truck and even a rifle scoped in on him.

“I was walking through this parking lot … and I see some guys about 150 yards away,” he said. “Didn’t think much about it, but I’m walking in their direction. And so, I’m in uniform; I got a satchel on my shoulder. My jeep was straight back there. And so, I walked by him … he’s pointing to his rifle sitting on the hood of the car. He said, ‘I had my scope on you’…I just kept moving. I wanted to get out of there.”

After two years of big city letter delivering, he and his wife decided they wanted to raise their children back home. Before they had their first daughter Brittany, Dan and his wife Sheila moved to Scottsbluff, where he would continue his letter carrying career, although he did feel like he had to start over a little bit.

“You lose your seniority because you can’t just come in and move ahead,” he said. “It didn’t matter because I was at my seniority level in five years anyway.”

He’s been at the Scottsbluff Post Office ever since. He and Sheila raised Brittany and her younger sister Brianna (now Brianna Hebbert) in Scottsbluff. Sheila worked at the hospital as a nurse.

He has seen a lot of change during his long time in the letter carrying business. He said he remembered back when they had to case up all the letter mail by hand—anywhere between six to 10 feet worth. And they had to carry all that mail on their routes, even if they just walked.

Then the Direct Point Sequence (DPS) machinery started casing and sorting mail for them, saving the carriers more time for actually delivering mail. Then as email, text messaging and social media moved in, the kind of mail Kihlthau was seeing began to change. He said he started seeing less letter mail and a lot more packages.

“We got a lot more packages because of Amazon and stuff,” he said. “We’ve always had packages, but with the Amazon contract four years ago, it’s just, it really does add to it.”

Often averaging 7 to ten miles of walking a day, the amount of walking definitely took a toll on him. He attributes his meniscus tearing twice, a full knee replacement and a partial knee replace all to the nearly 80,000 miles he has walked on the job over the past 36 years. Seventy-five thousand miles is three times around the planet.

His wife Sheila said that she spent a lot of time praying for him not only because of the toll his job was taking on his knees, but also because of all the weather he had to work through.

“They never told us not to come in because the management in the Postal Service always wants you to make an attempt,” Dan said. “The only time was two years ago when we had the blizzard…they just called it because the trucks weren’t able to come in…They can’t come, we have no mail. And so we didn’t come in that day.”

That was the only time in 36 years that Dan’s boss told him not to come into work. Not even COVID-19 could stop his job as an essential worker, providing groceries, medication, clothing and anything else people could no longer get while they holed up in their houses for months on end.

Kihlthau’s dedication to his job and the people he served did not go unnoticed, although Brittany said that many people take their mailman for granted.

“He’ll come home, even when I was young, he came home with jam or gift card or cookies,” she said. “You, I think, often take your mail carrier, your letter carrier, for granted, but when you have somebody who’s consistent and is doing a great job all the time, customers like to show it.”

He even received an award called the Million Mile Club from the USPS about five years ago for having safe driving for 30 years during his career.

Now, after having thoroughly fulfilled his childhood desire to serve his community through delivering mail, he plans to retire. He said he’s not sure what he’ll do during his retirement. Brittany said she plans on him being able to nanny her son Hudson more often. Whatever he does, he said he’s glad he will now have more flexibility with his time.

“I want to know what it’s like to not have to work weekends. I’ve never had that,” he said. “Most people have weekends off. I think there’s probably only 20% of the people who work weekends.”

As he finishes up his last week with USPS, he has a few words of wisdom for the newcomers.

“It’s a hard job. It’s harder than people think,” he said, noting the many incoming mailmen or women he has seen quit because they couldn’t handle the physical aspects of the job. “The only way you could ever survive a job like this is you have to want it.”

Kihlthau’s family will be hosting a retirement party on Sunday, Oct. 4 at 2 p.m. at the Calvary Memorial Gymnasium. The party is open to the entire community for anyone who wants to wish him well or stay in touch with him after his retirement. For Kihlthau, the party will be celebrating two important pieces of his life: his career and his family.

“I’m a Christian, and I prayed about two things: that I would be, that I would deliver mail and I would marry her,” he said pointing at his wife Sheila of 36 years. “God answered that prayer.”

Scottsbluff firefighters rescued a man Monday who had climbed a water tower in Scottsbluff.

Scottsbluff Police have released additional details in the investigation of a homicide. Gregory Moore, 54, of Scottsbluff, has been arrested on charges in the death of 23-year-old Fernando Camacho-McBride.

A 39-year-old Gering man has been charged, accused of sexually assaulting a woman while she was incapacitated due to seizures or medication.

Two families are displaced after a fire at an apartment building in Scottsbluff Tuesday night.

A federal lawsuit seeking more than $500,000 in damages has been filed against the owners and operators of a Sandhills ranch who have been acc…

In recent weeks, Gov. Pete Ricketts has stepped up press conferences reporting on the state of the coronavirus in Nebraska. Ricketts began reg…

WATCH NOW: Volunteers with Thanksgiving in the Valley serve up 900 meals

WATCH NOW: Volunteers with Thanksgiving in the Valley serve up 900 meals

Dan Kihlthau delivers mail on one of his routes on Sept. 18. He's been on the city 11 route for about 14 years. The route he had before that was city 4 for five months. His first route was primarily an all walking rout and he had it for 18 years.

Kihlthau steps out of his mail truck to deliver mail on Sept. 18. He said that getting in and out of his truck, along with the large amount of walking he has done on the job, is probably related to his many knee problems over the years. It's a hard job, he said, but "someone's got to do it."