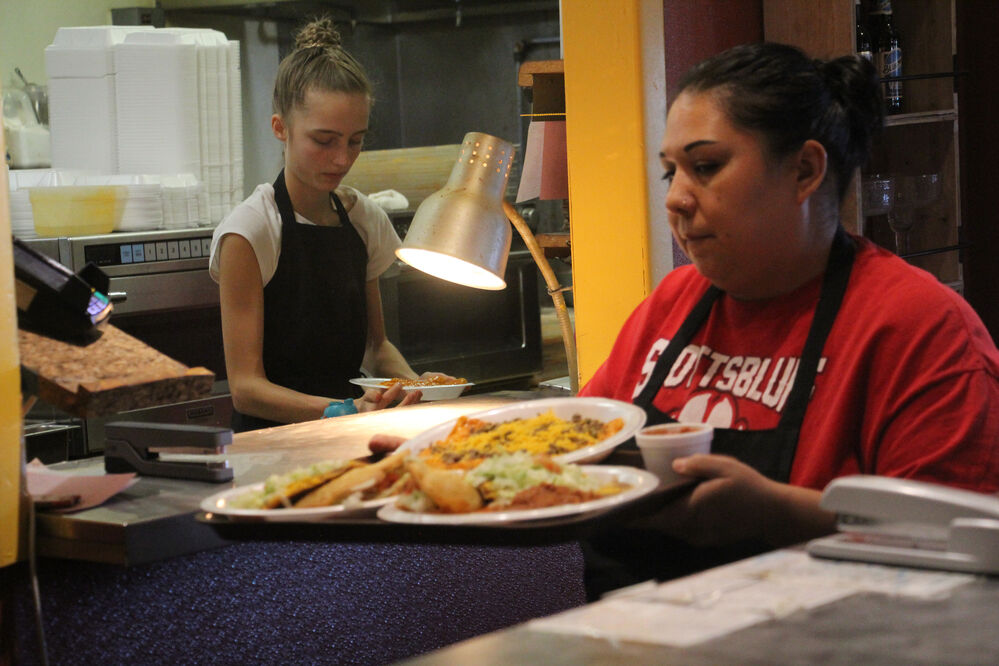 Melissa Rodriguez carries out an order at Taco Town while Emmie Dedic sets down a plate of enchiladas in the background. Dedic's parents, Justin and Jeanna, bought the establishment in 2013. 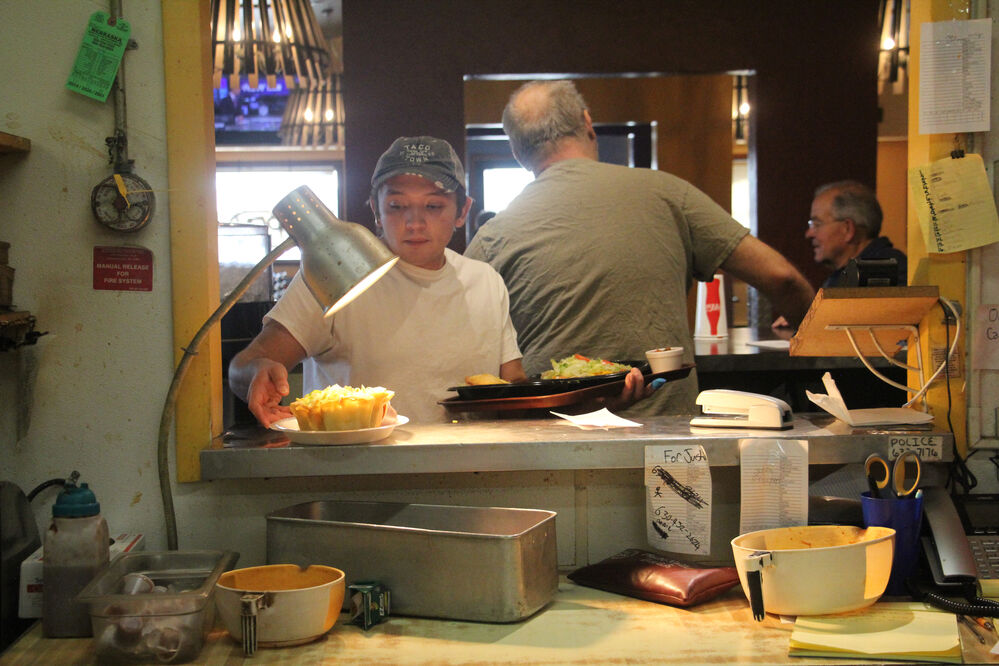 A look from the inside of Taco Town's kitchen. The restaurant has a small staff of just 11, but they're often kept busy during lunch and dinner rushes. 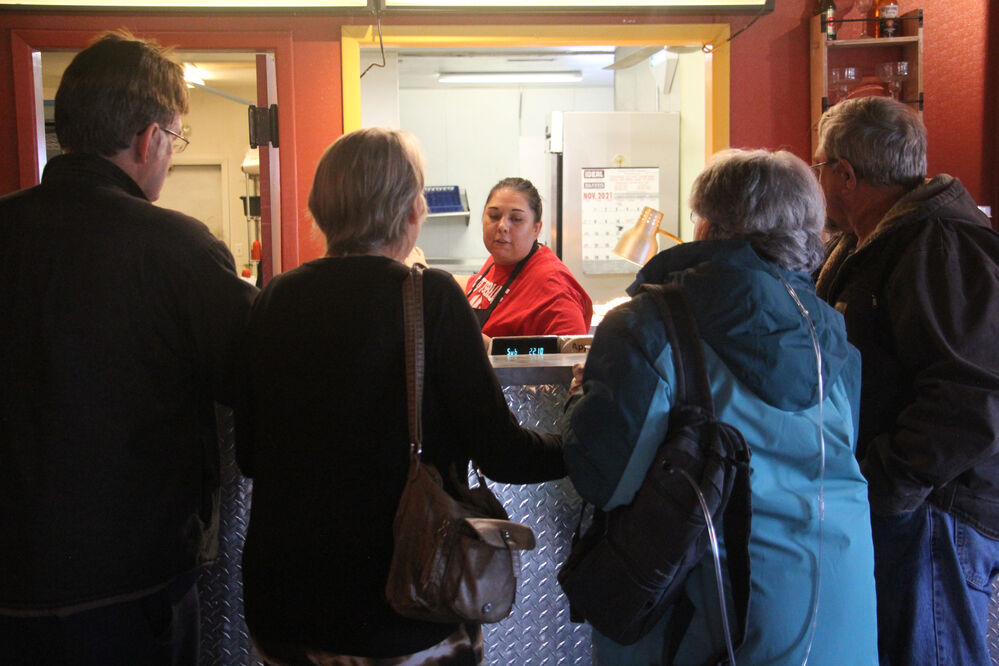 Melissa Rodriguez takes a customer's order. Many of Taco Town's patrons have been visiting the restaurant for decades. It opened up in the 1950s. 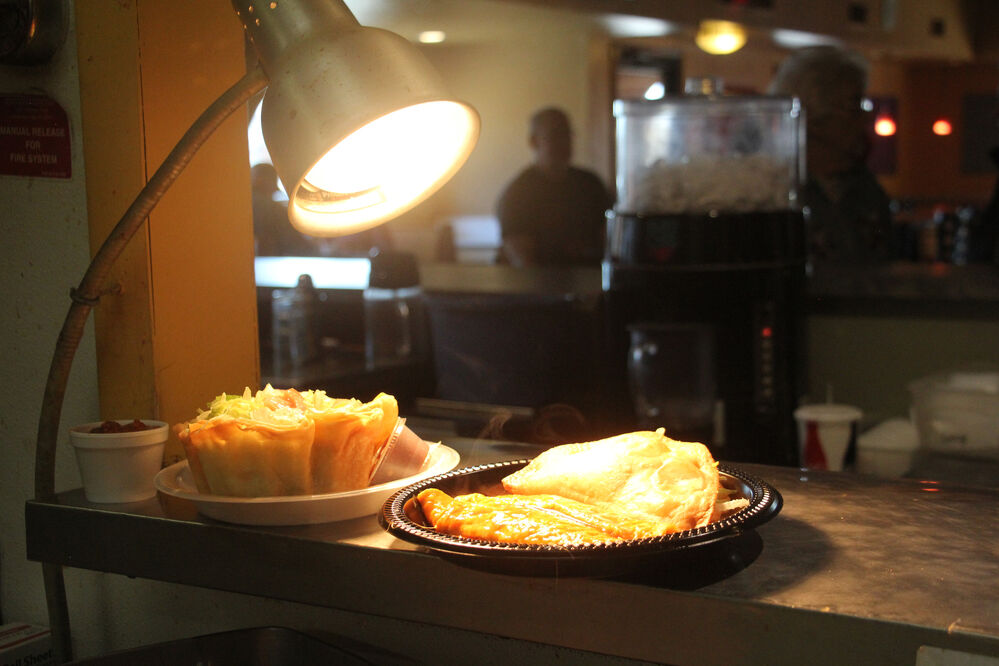 As the name implies, Taco Town is a Mexican restaurant, with fried tacos, taco salads, tostadas and enchiladas being among their most popular menu items.

Terry Brown has spent decades eating at Taco Town on an almost daily basis. “Now he’s in the veteran’s home, and I bust him out every week and we come here,” his friend and former neighbor Michelle Wolfley said. “I get something different pretty much every time. He always gets the enchiladas.”

It’s that consistency, the two said, which keeps them coming back. That, and the friendly and quick service, and the reasonable prices, and the fact they’re open at 11 a.m. For Brown, he’s just continuing a tradition he’s had since 1977.

The influence of Taco Town stretches back even further. The restaurant opened in the 1950s, and didn’t move to its current location at 1007 W 27th St. until 1982. It has served generations of Platte Valley residents, including current owners Justin and Jeanna Dedic.

The Dedics were looking to bring one of their favorite Denver restaurants to Scottsbluff when they moved back to the area in 2012.

“We called on a couple of them, but we didn’t have any restaurant experience at the time, didn’t have investors,” Justin Dedic said. “They looked at the size of the community, no interstates or things like that, and they kind of laughed me off the phone. Right after that it came out in the paper that Taco Town was for sale so it became the perfect storm.”

The Dedics were fans of the menu growing up, so when they bought the establishment in 2013, they made very few changes to it. The same could not be said for the restaurant’s design. Within a few months of taking over, they had remodeled both the interior and exterior. They moved the main entrance from the corner of the restaurant to a more central location. They installed arches to naturally draw people to the cashiers. They gave the place a new paint job of bright yellow, purple and red.

“We had some fun with that,” Dedic said. “...Being it’s a restaurant, you can kind of get away with some bolder colors you might not get away with if it’s a house or something.”

Taco Town previously resembled a cafeteria, and their goal was to make it look more like a diner.

This plan included getting a liquor license and installing several televisions. Dedic likes to watch Nebraska Cornhuskers games, and he figured his customers would too. While the restaurant is open from 10:45 a.m. to 9 p.m., people usually visit during lunch rushes and the evenings. Almost half of the customers come through the drive-through.

The business has its staples: enchiladas, fried tacos and tostadas. Many of its more popular items have special discount days. The restaurant’s namesake is 25 cents cheaper on Wednesdays.

“Everyone thinks that they should be on Tuesdays because of Taco Tuesdays, but I think we get that free publicity for it on Tuesdays anyways, so we keep our taco special on Wednesdays,” Dedic said.

The Tuesday slot is instead taken by taco salads. Other discounted items include tostadas on Thursday, the combination plate on Friday and super taco salads with rice and beans on Saturday. Taco Town is closed on Sundays.

For a while, it was closed even longer. In May 2020, a Taco Town employee tested positive for the coronavirus. The entire staff went into quarantine, but nobody else wound up with any symptoms. However, it was the first time many people in Scottsbluff had specifically known of someone catching the virus.

“That’s the advantage of being here since the ‘50s,” he said. “We have a strong base...as soon as we opened our doors, people came flooding back.”

Many diners have eaten at Taco Town for just as long as Dedic. Some have dined there for even longer. Over the decades, people have made it a tradition.

“You come to know who they are, what their orders are,” he said.

Like Brown and his enchiladas, or the woman who always orders a taco and Diet Dr. Pepper from the drive-through. Then there are the family gatherings, or wedding rehearsal dinners, or celebrations of life. People commonly stop by or order takeout for extended families.

“I’ve had grandparents say, a little bit upset, ‘You got to see our grandkids before we did‘ because when they come into town, they stop here to eat before they go to their grandparents’ house,” Dedic said.

Just like he and his family did when they lived in Denver, people often stop by whenever they come from out of town. On Fridays, Dedic said he likes to stay until closing and listen to what these customers have to say.

“Everyone has a story,” he said. “Everyone likes to share it and we always like to hear about it.”

The combination plate, which includes a taco, enchilada and tostada. The meal is discounted on Fridays.

Three people, including the pilot, were killed in the crash of a small plane near Chadron Sunday evening.

Regional West physician, his son and family friend identified as those killed in Chadron plane crash

A Regional West physician, his son and a family friend were killed in a Chadron plane crash Sunday.

Kyle Edwards, 35, of Hay Springs, died Saturday in a two-vehicle crash about 16 miles northeast of Hemingford in western Nebraska.

A Melbeta man setting up a goose blind located parts of a human body, which is now being evaluated by a state DNA lab.

After a COVID-19 scare, Terry and Vi Reitz will celebrate the Thanksgiving they didn’t have last year

Exactly one year ago, the Panhandle was in the middle of a COVID-19 surge, and many families decided to forgo the extravagant Thanksgiving get…

Renovations to clothing closet will give children a temporary home

When children enter the foster care system, they might not have much with them. In some cases, the only clothes they have are the ones on thei…

The day after Black Friday is a day to shop small. In the decade after its creation, Small Business Saturday has become a day focused on suppo…

After lower COVID-19 case levels within the last couple of weeks, one Panhandle hospital administrator is hopeful that strain on local hospita…

LIFE ON THE LINE: Firefighters put their lives at risk fighting wildfires

A call comes in when you’re at your kid’s birthday party. It’s a wildfire. You quickly grab your gear and head out to the scene of the fire. S…

Melissa Rodriguez carries out an order at Taco Town while Emmie Dedic sets down a plate of enchiladas in the background. Dedic's parents, Justin and Jeanna, bought the establishment in 2013.

A look from the inside of Taco Town's kitchen. The restaurant has a small staff of just 11, but they're often kept busy during lunch and dinner rushes.

Melissa Rodriguez takes a customer's order. Many of Taco Town's patrons have been visiting the restaurant for decades. It opened up in the 1950s.

As the name implies, Taco Town is a Mexican restaurant, with fried tacos, taco salads, tostadas and enchiladas being among their most popular menu items.