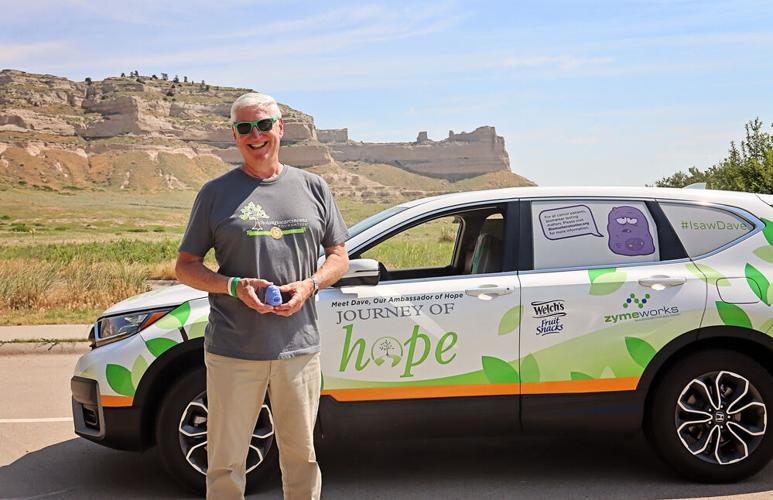 New Jersey man Dave Fleischer has been traveling the 48 contiguous states as he raises awareness about The Cholangiocarcinoma Foundation on his "Journey of Hope." Dave's daughter, Sarah, died of the rare bile duct cancer in 2018. He is holding Mike O’Langio — an animated character who represents a cancer mutation and a conversation starter about biomarkers. 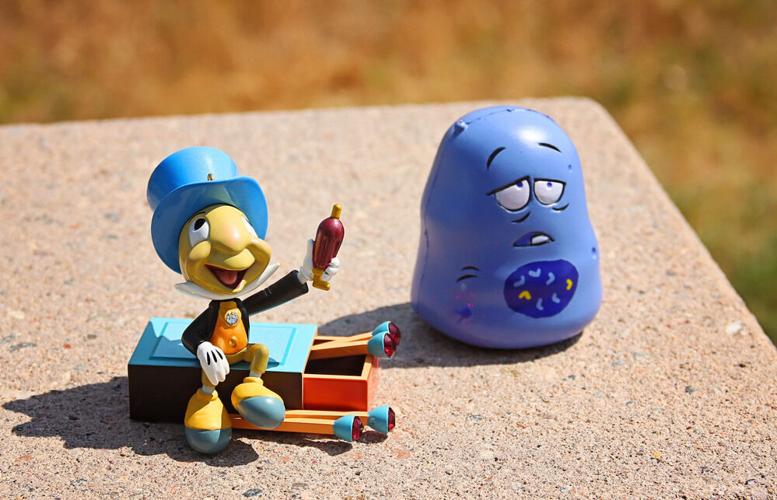 The Disney character, Jiminy Cricket, and his catchphrase, “Give A Little Whistle” has also been a inspirational tagline on Dave Fleischer’s Journey of Hope. It also serves as a reminder for Fleischer of the last time he saw his daughter, Sarah, smile.

Like many traveling across the state and Panhandle Wednesday, David Fleischer, of New Jersey, stopped at the Scotts Bluff National Monument as part of a road trip. However, Fleischer’s road trip isn’t just any ol’ road trip. He’s on a Journey of Hope.

In May, Fleischer set out to travel 15,000 miles, all 48 contiguous states in the U.S. and at least 15 towns with the name hope. He also planned to meet with 15 different patients and caregivers of a rare cancer, cholangiocarcinoma, or bile duct cancer.

Visiting with those 15 patients and caregivers would have been important to his daughter, Sarah, who died in 2018 after a 4 1/2 year battle with cholangiocarcinoma.

“The journey I’m on started out to just do something to memorialize my daughter,” he said. “It’s turned into something much bigger than that.”

Fleischer is involved with an organization called The Cholangiocarcinoma Foundation, which is celebrating its 15th anniversary — one of the reasons that 15 is such a prominent number in his journey. As part of his road trip, he is also visiting with 15 hospitals and research facilities that are working to find a cure for cholangiocarcinoma, as well as promoting genetic testing for mutations that can help extend one’s life. Just months ago, he began serving on a committee for The Cholangiocarcinoma Foundation to mark its 15th anniversary.

“The next thing I know, I was volunteering to drive 15,000 miles, and all these other things,” he said. “And, I will tell you that one of the things I underestimated the impact this was going to have on patients and caregivers. I found out that a lot of people think that they are no longer alone in their struggles and I am providing hope to them by raising awareness.”

Initially, Fleischer thought he’d make the trip via a rental car, but then he was donated a wrapped vehicle by a sponsor. He thought he’d start out where he lived, in New Jersey, but as his itinerary changed, he has rerouted three times after people have reached out to him, asking him to visit him.

His route took him through Scottsbluff-Gering because of his own interests in history and maps. He’s visited the monument before and felt that the monument’s message of hope stemming from the pioneers’ journeys across Nebraska tied right into his own inspirational journey.

“It’s got a lot to do with hope, like the hope we’re going to make it across the country from Missouri to Oregon, to California, or Utah or wherever we’re going. So I see that as I’m just following along a little bit of the journey that other people did back in the 1850s.”

Along his Journey of Hope, Fleischer spreads his own message, sharing information about cholangiocarcinoma, the foundation and its efforts and the biggest thing he likes to share is about Mike O’Langio — a clever name that he has given an animated character who represents a cancer mutation.

“What’s important about that is that anybody that’s diagnosed with cancer, especially a rare cancer, needs to have genetic testing to find out what mutations they have, because there may be a therapy that aligns with that mutation that an individual has that they may be able to use to at least extend their life and the quantity and quality,” Fleischer said.

It’s rare that people he comes into contact with know about cholangiocarcinoma. Only about 8,000 people in the U.S. develop cholangiocarcinoma each year, and a cancer is considered rare if fewer than 40,000 people develop it a year, according to The Cholangiocarcinoma Foundation website. Often times, people are just willing to talk to Fleischer, hear about his story and share their own stories. Some have started talking to him because of his car, which identifies him on it. Others because of their own struggles, or their own hopes. People have given him decorated T-shirts, decorated shoes and even given him travel recommendations. He’s affable and makes a great “ambassador of hope,” as he has been dubbed on the gifts he’s been given.

And, Fleischer shares his own stories, like the emotional story about his daughter Sarah, and the Jiminy Cricket character that he carries with him. As Sarah neared the end of her life, four days before hospice was called in, he said, she whispered as he watched her sleep, “Give a little whistle,” and smiled. He didn’t know what it was about, asking his wife, and later making the connection to the Walt Disney character that serves as Pinocchio’s conscience on his own journey to become a real boy. The “Give a Little Whistle” phrase is a tag on Fleischer’s vehicle and other journey memorabilia. For Fleischer, it’s more about the memory about the last time he saw his daughter smile.

This year, The Cholangiocarcinoma Foundation has set a goal of raising $150,000 for its efforts.

“When you think about other cancers, it isn’t a lot of money,” Fleischer said. “But we have to start somewhere. More money is being raised each year and I’m fortunate. As I started this journey, it was to build awareness, but we have raised $40,000 so far.” He has a goal of raising $45,000 before he reaches the end of his Journey of Hope and is confident that he’ll make it. As he talks to caregivers, patients and those who live in towns with the names of hope, he said, he learns from their perspective of being present in life and appreciating everyday.

“‘It does give me hope to know that there are others that are out there fighting for me,’” he said patients tell him. “That’s the most common theme that I’ve heard.”

Having retired after 40 years in the confections business, Fleischer said he was able to take this journey to “give it a little meaning” and he describes it as humbling. He has less than a week to go and he said he finds himself wondering what he is going to do next. Recently, he said, he learned of another volunteer who will swim the English Channel next year to raise awareness about The Cholangiocarcinoma Foundation. Fleischer said he has offered to be in England cheering him on, and then on the other side, in France, to congratulate him when he completes. He may even take on his own European version of The Journey of the Hope.

Maunette Loeks is the community content coordinator for Lee Enterprises and writes for theStar-Herald. Contact her at 308-632-9054 or by email at maunette.loeks@lee.net.

New Jersey man Dave Fleischer has been traveling the 48 contiguous states as he raises awareness about The Cholangiocarcinoma Foundation on his "Journey of Hope." Dave's daughter, Sarah, died of the rare bile duct cancer in 2018. He is holding Mike O’Langio — an animated character who represents a cancer mutation and a conversation starter about biomarkers.

The Disney character, Jiminy Cricket, and his catchphrase, “Give A Little Whistle” has also been a inspirational tagline on Dave Fleischer’s Journey of Hope. It also serves as a reminder for Fleischer of the last time he saw his daughter, Sarah, smile.