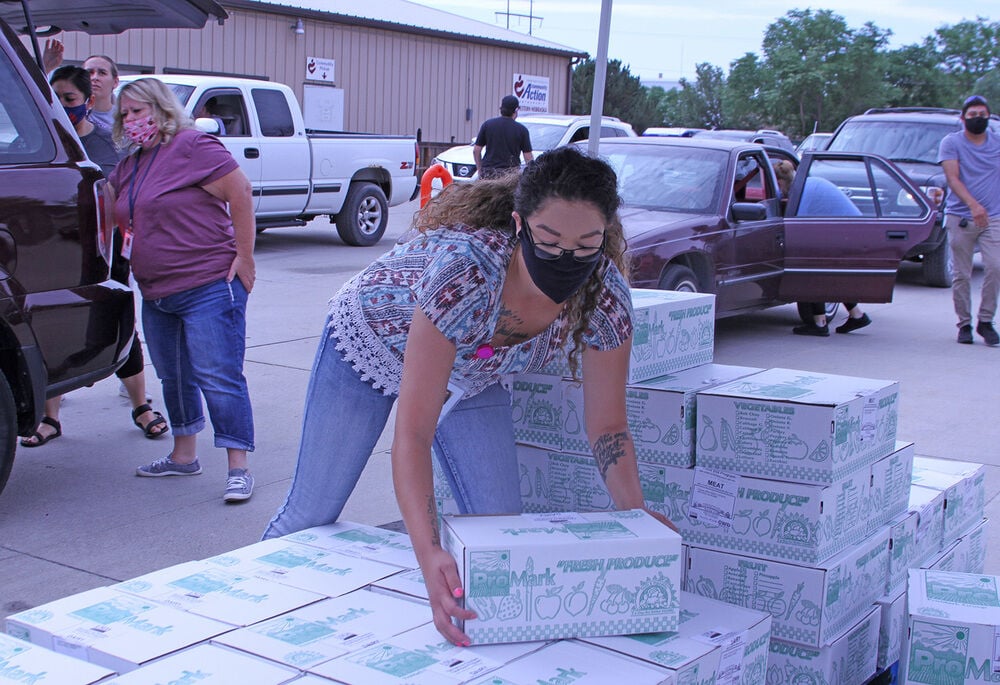 Staff and volunteers loaded 275 boxes containing produce, dairy and meats at the Community Action Partnership of Western Nebraska Friday distribution of Farmers to Families Food Boxes. The program will continue for the next four Fridays. Danielle Prokop/Star-Herald 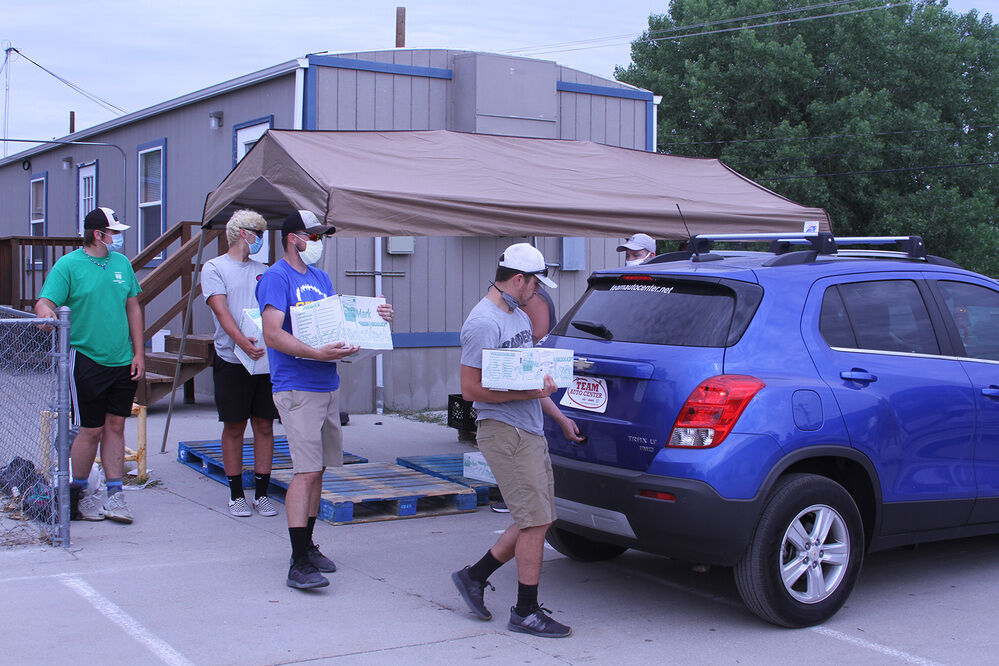 Staff and volunteers loaded 275 boxes containing produce, dairy and meats at the Community Action Partnership of Western Nebraska Friday distribution of Farmers to Families Food Boxes. The program will continue for the next four Fridays. Danielle Prokop/Star-Herald

A line of cars wrapped onto 10th Street from Twin City Drive Friday morning as people waited for food distributed by volunteers and staff at Community Action Partnership of Western Nebraska (CAPWN) for the second week of the Farmers to Families Food box program.

Sarah Ochoa, the community health services director for CAPWN, said the food was provided by a federal program to make sure farmers did not have to throw away food because of COVID-19 disruption to the markets. The U.S. Department of Agriculture (USDA) is authorized to purchase up to $3 billion in dairy, meat and produce and distribute the food across the country.

Ochoa said CAPWN volunteers and staff will continue distributing food in the Farmers to Families program for the next four Fridays, and return to once a month distributions after that.

“Definitely, there’s a need in the community,” she said. “We’re not seeing the same people every week, which is a good thing, people are coming when they need it.”

According to their website, the USDA spent $1.2 billion for 35.4 million food boxes from mid-May to the end of June, and the second, ongoing round estimates the department spending $1.47 billion on food, through the end of August. Ochoa said CAPWN is working with a food distributor in North Platte, Cash-Wa Distributing Co. Inc.

Ochoa said people started lining up at 7 a.m. waiting for food distribution to start at 8 a.m. By 9:30 a.m., all the food was given away. That left, according to the Star-Herald’s count, drivers in 40 vehicles who had waited in line to leave empty-handed.

Ochoa said CAPWN would work with the distributor to order additional food for next week’s distribution.

“We hate turning people away, but the good thing is every week we’re doing it,” she said. “If someone really did need food today, I want them to call our food pantry and set up an appointment at 308-635-3089. We don’t want anybody to go without food.”

Ochoa said volunteers and staff were distributing 275 boxes with fresh foods such as fruits, vegetables, dairy and meat along with a half-gallon of milk. Last week, they served 424 people.

Volunteers included basketball and wrestling team members from Gering High School. Basketball Head Coach Kyle Cotton said the team likes to do volunteer projects for the summer, and that they heard about the opportunity from a parent.

“With everything going on, we haven’t been able to come out very much this summer, but it’s good to give back,” he said.

Many who waited in line did not want to be identified, citing a stigma of receiving food assistance, but some expressed frustration with the process.

“I wish there could be a sign, you know, so we don’t have to wait for no reason,” one woman said.

Alicia Molina, who waited for half an hour before being turned away at the end of the line, said getting food assistance was helping out her family.

“Without childcare, the kids are home all the time, and they eat more at home, so this helps us feed everyone,” she said.

No levy increase in payback of $29 million GO Bond

LOOKING BACK: Building a home on the range