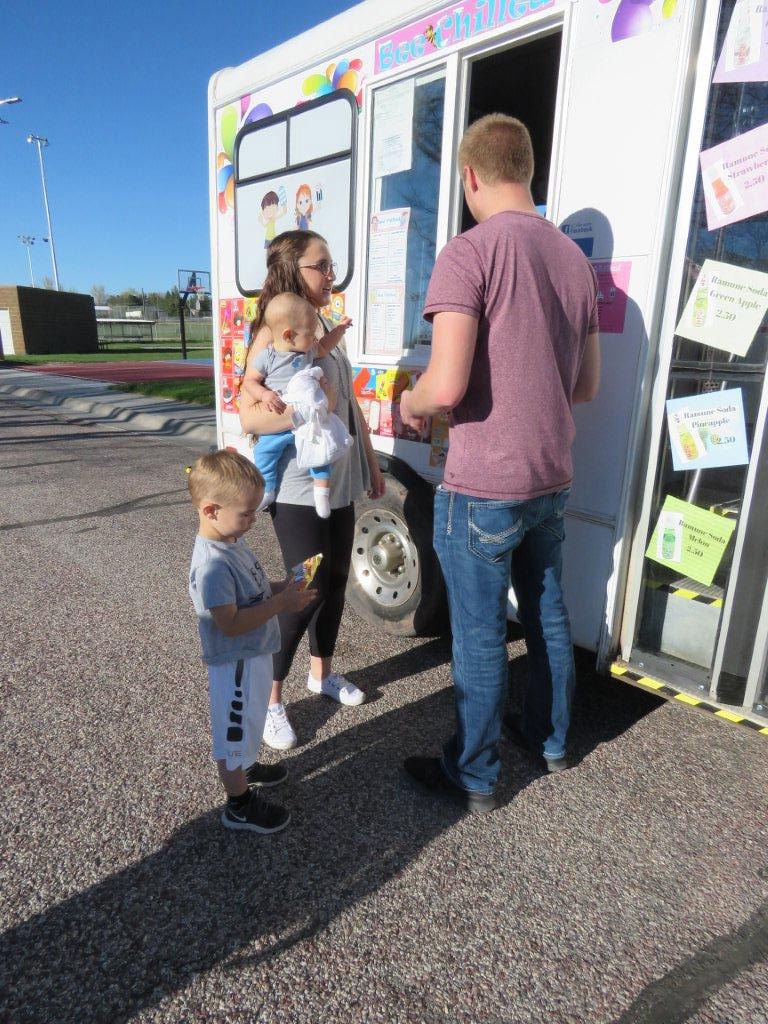 Opening his super hero ice cream treat was top priority for 3-year-old Weston, while his 8-month-old brother, Lane, and the children's babysitters, Keely Schwartkopf and Lucas Bernard, made their selections. The group joined a play ground full of adults and children for the Bee Chilled Ice Cream Truck grand opening at Jirdon Park in Torrington, Wyo., Thursday afternoon, May 4. 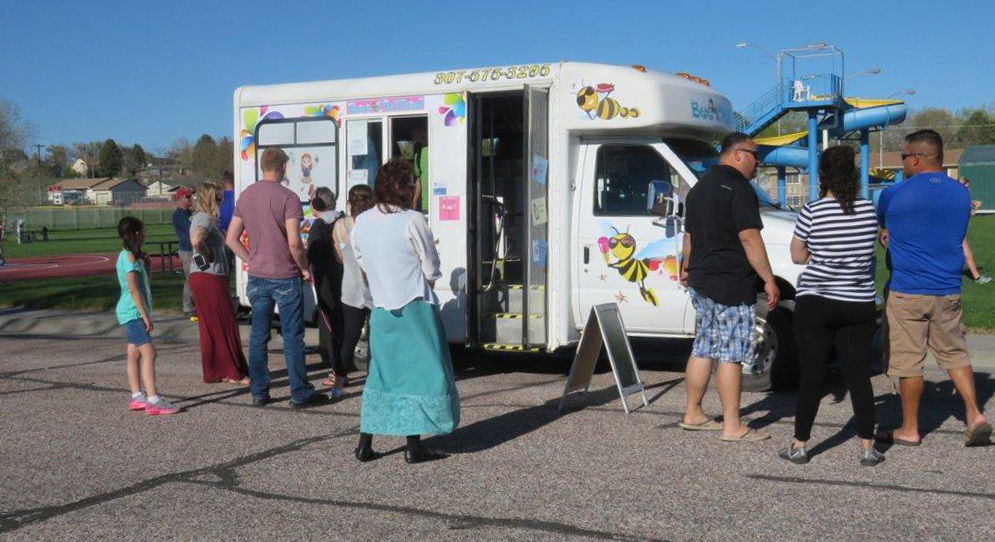 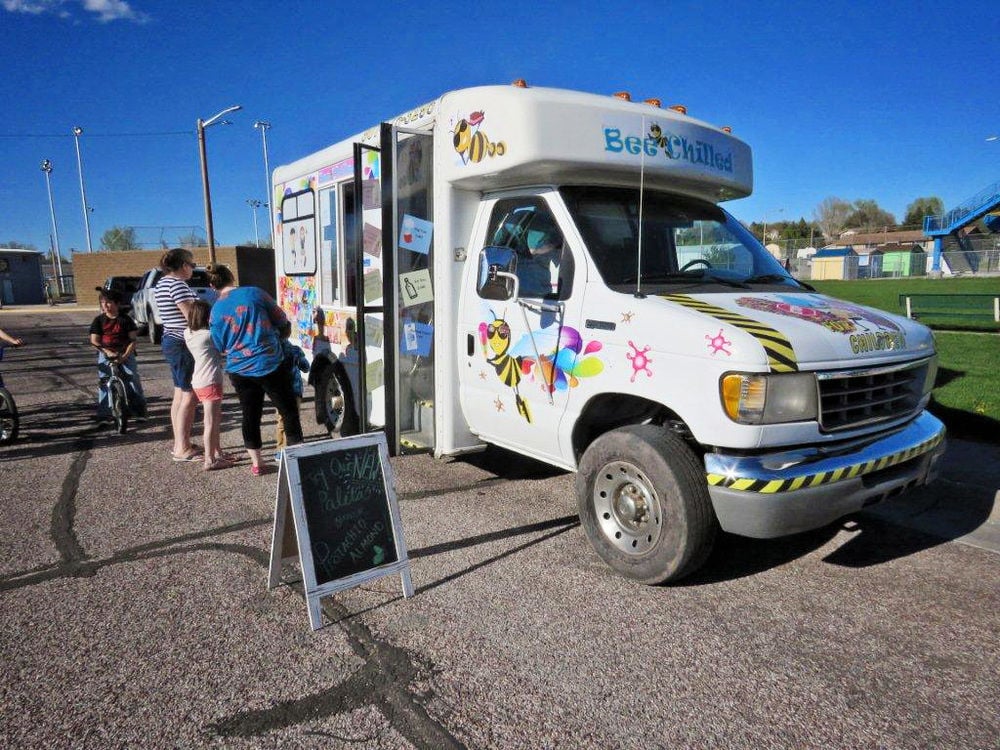 TORRINGTON, Wyo. — Ice cream lovers, your summer wishes have been answered. Wylie and Marcos Martinez and their Bee Chilled mobile ice cream truck soon will be visiting your neighborhood.

Wylie and Marcos are Goshen County born and raised, and are bringing up their sons, Bailey, Beau, and daughter, Tayce, in their native surroundings. The children also take a hand in helping with the operation.

According to Marcos, the vehicle is a retrofitted shuttle bus, a project that developed after an earlier deal for an ice cream truck fell through.

“Wylie had always dreamed of having an ice cream truck,” Marcos explained of the family’s determination to make the effort a reality.

Motioning to the colorful “ice cream box” on wheels, Marcos said, “It was very important to her, so we decided to go for it. And with a lot of hard work, here it is.”

Wylie fairly bubbled with enthusiasm as she explained how her dream materialized. Standing at the edge of a crowd of customers, she filled in details of Marcos’ comments.

The couple had decided on a vehicle, but at the last minute, another party beat them to it.

“My heart was broken,” Wylie explained. “It was hard to let go of my dream, but I had decided that nothing would change.

“The family was talking about it when my dad said ‘Be chilled.’ It just clicked, Bee Chilled. We decided to try again, and it all came together.”

The Bee Chilled truck will not only tour neighborhoods, it is also available for birthday and graduation parties, as well as other events where cool treats would be a welcome addition to the activities. It carries the classic cold treats and cool snacks, in addition to Japanese sodas, several Mexican cold sweets, and a choice of beverages.

Because of the family’s busy lives, the truck does not have an established schedule, nor a determined menu.

“We want to find out what people like best,” Wylie explained, adding that her children are involved in a number of activities. She is a teacher in the church pre-school, and Marcos works on the railroad, so scheduling will be determined as time goes on.

“It’s just awesome,” Wylie exclaimed, clasping her hands below her chin while watching the line of adults and children study the offerings displayed with decals, interspersed with smiling bees, on the sides of the truck. “I’m so proud to say it’s ours.”

More information and menu items are on the Bee Chilled Facebook page. Telephone calls are welcome, too, at 307-575-3295.

Sandy Hansen is the agriculture editor with the Star-Herald. She can be reached at shansen@starherald.com or by calling 308-632-9049.

One killed in Banner County rollover

One person has been killed and another injured in a Banner County rollover.

Margaret Mathison, 23, died in the crash that occurred on Highway 71 in Banner County, according to information released by the Nebraska State Patrol.

"Street Outlaws" will be allowed to film an additional two to three weeks after a unanimous vote by the Scotts Bluff County Commission on Tuesday.

Sentencing has been delayed for a Bayard man set to be sentencied on charges in a crash that seriously injured a 12-year-old boy.

Justin Zambrowski, 44, and Rachel Wasserburger, 24, were sentenced on charges of possession with the intent to distribute 50 grams or more of a mixture of methamphetamine, stemming from a March 2019 arrest in Banner County.

In a show of support for Reina Sanchez, 4, superheroes will gather near the Gering landfill on Sept. 18 to show support for a 4-year-old girl with a love for comic books.

The winners of the 22nd annual United Way of Western Nebraska Rubber Duck Draw have been announced.

Michelle Smith said she was lucky she opened her Aug. 28 utility bill from the City of Gering instead of her usual routine of shredding it. Th…

The United Way held a Monday news conference to announce the winners of this year’s Duck Draw. United Way of Western Nebraska's Jill Allen said support for United Way has remained strong even during the pandemic.

Opening his super hero ice cream treat was top priority for 3-year-old Weston, while his 8-month-old brother, Lane, and the children's babysitters, Keely Schwartkopf and Lucas Bernard, made their selections. The group joined a play ground full of adults and children for the Bee Chilled Ice Cream Truck grand opening at Jirdon Park in Torrington, Wyo., Thursday afternoon, May 4.