Virus briefing: Back to school, or not? Parents face hard choice 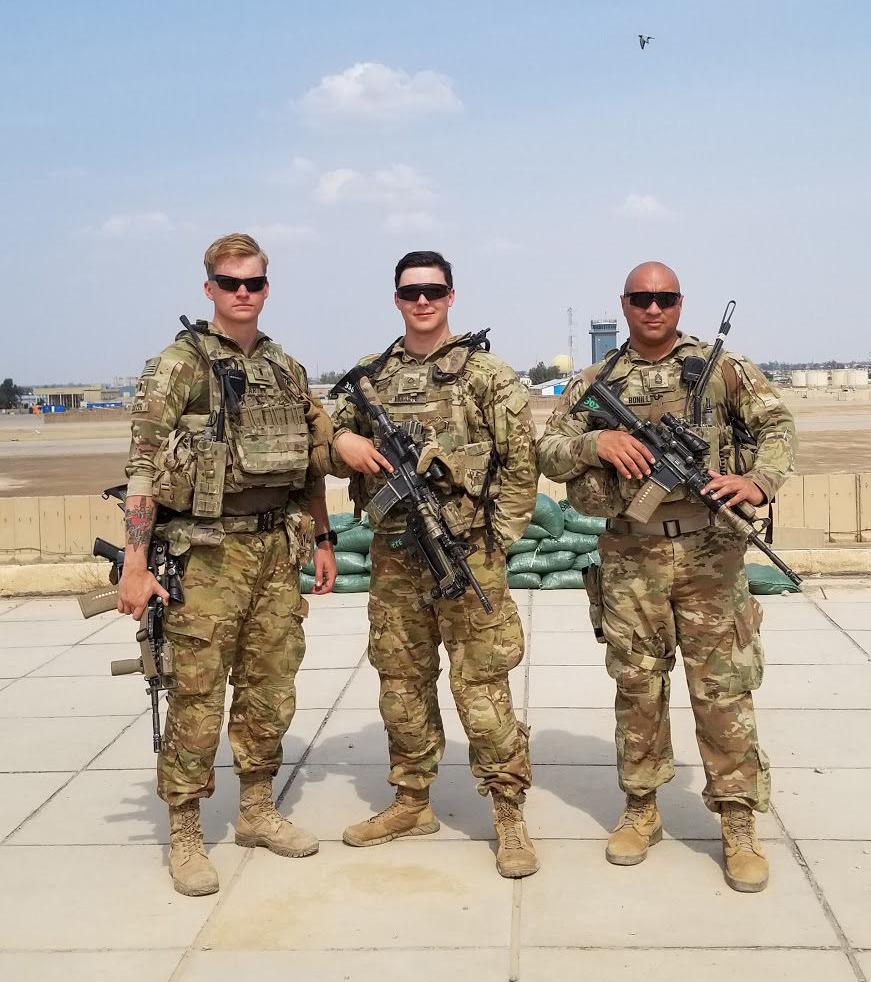 Army Specialist Jaden McDuffie (middle) stands with his lieutenant and his platoon sergeant while on deployment.

1st squad, 3rd platoon, A CO 1-504th PIR is seen at Camp Taji, Iraq while on deployment in the winter. 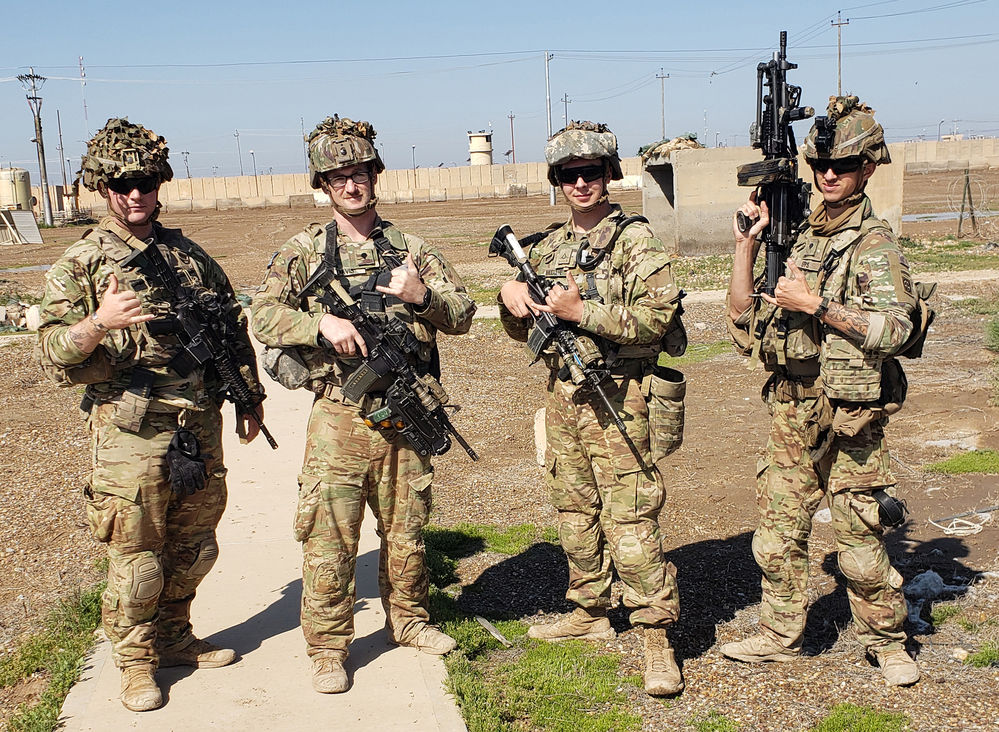 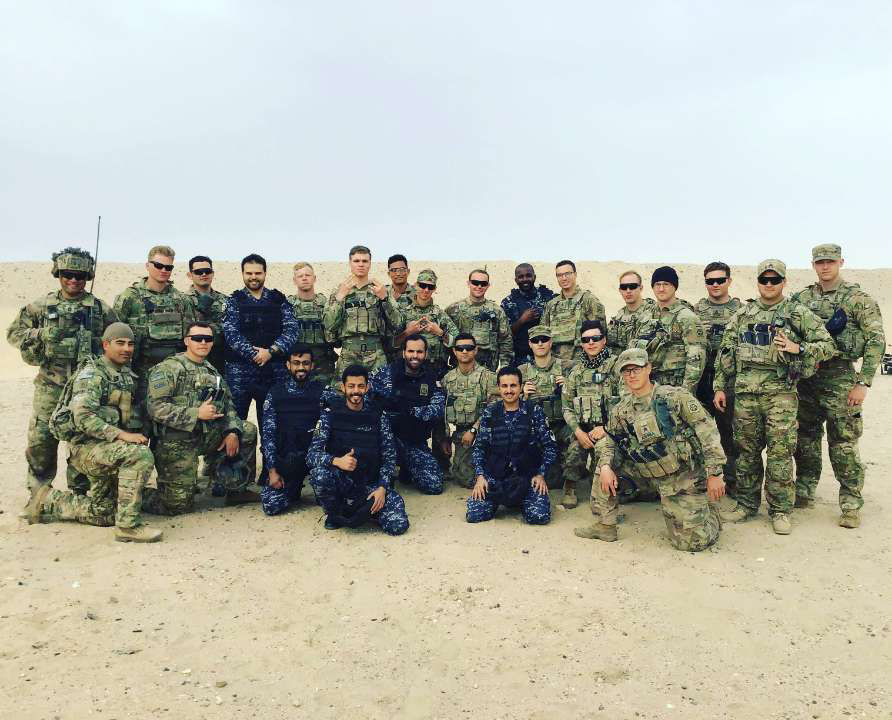 Army Specialist Jaden McDuffie and his entire platoon and members of the Kuwaiti special forces that his platoon trained with.

Army Specialist Jaden McDuffie and his platoon are seen in a tower while on deployment. 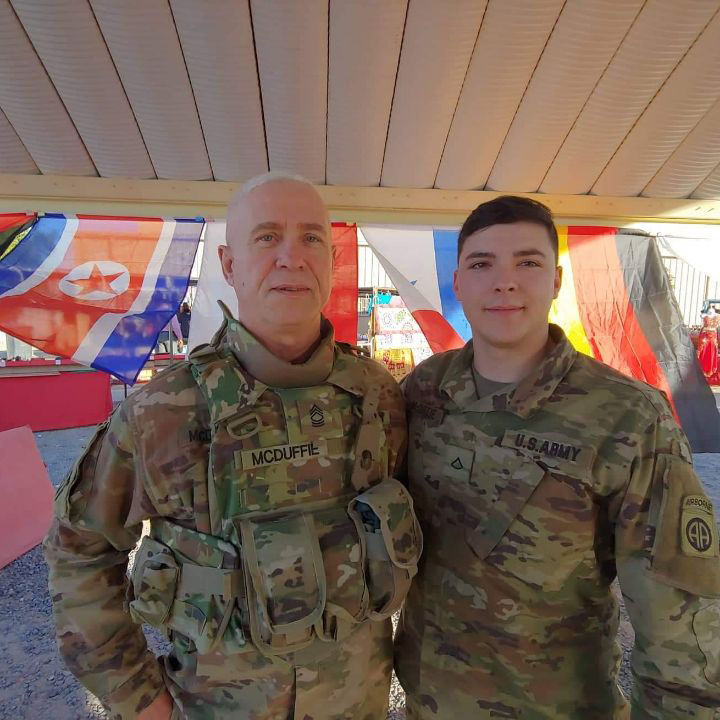 First Sargent Mark McDuffie (left) and his son, Army Specialist Jaden McDuffie (right) were able to reunite in the midst of Mark's last deployment and Jaden's first deployment while in Camp Buehring, Kuwait.

Army Specialist Jaden McDuffie (middle) stands with his lieutenant and his platoon sergeant while on deployment.

1st squad, 3rd platoon, A CO 1-504th PIR is seen at Camp Taji, Iraq while on deployment in the winter.

Army Specialist Jaden McDuffie and his entire platoon and members of the Kuwaiti special forces that his platoon trained with.

Army Specialist Jaden McDuffie and his platoon are seen in a tower while on deployment.

First Sargent Mark McDuffie (left) and his son, Army Specialist Jaden McDuffie (right) were able to reunite in the midst of Mark's last deployment and Jaden's first deployment while in Camp Buehring, Kuwait.

In the midst of transport to his post of deployment, just south of the Iraqi border, in the Kuwait desert, a brief and unlikely reunion between 20-year old Army Specialist Jaden McDuffie and his father, 1st Sergeant Mark McDuffie, in January. The reunion occurred while both were deployed, a situation which Mark said, doesn’t happen very often.

Mark had been in his last deployment with the National Guard before retirement and Jaden beginning his first deployment of his career with the Army. Their reunion was an extremely unlikely moment, but Mark said it was a proud moment that he will always remember.

Jaden, a Lingle-Fort Laramie High School graduate who calls Lingle and Torrington home, began his military career only four days after his high school graduation in 2018, following in his father’s footsteps.

As a military family with generations of service, Mark said, he and Jaden both always knew Jaden wanted to go into the military from the time he was young.

“The biggest deciding factor was that my dad was in and that in my family, in some way shape or form, everybody has had a duty to serve for this country, so I needed to go do that duty,” Jaden said,“I enlisted in April of 2017, when I was 17 and I left for basic May 4th of 2018, four days after my high school graduation.”

A part of the Army’s 82nd Airborne division, known as America’s guard of honor, Jaden said, the 82nd Airborne is similar to the 911 the president dials whenever he needs a very large amount of soldiers, very quick.

“A good explanation of that would be this last January when we deployed, I was home and on leave. Within 12 hours, I went from sitting in my bed back in Wyoming to getting a phone call that said I need to be back at Fort Bragg, North Carolina,” Jaden said, “I went back to Fort Bragg the next day and was deployed three days later.”

Driving from his house located outside of Lingle, after getting his phone call with deployment details, as he traveled to the Denver airport, Jaden said, he couldn’t help but think about the difficulty in saying goodbye.

“When I was driving from my house down to Denver to get on the plane, my entire thought process the entire time, was that this could very well be the last time that I ever see this place,” Jaden said. “And saying goodbye to my family, not knowing if I would ever see them again, that was a lot of the thoughts going through my mind at the time, especially with the type of job that I have, and the type of job that my unit does, we can be in the s--- or we are not, it could be either which way.”

After leaving from his deployment with short notice, then the unlikely reacquainting with his father at Camp Buehring, Kuwait, he moved on with the rest of his unit to Camp Taji, Iraq.

“When I landed in Camp Taji, and within being there for 24 hours, we took a rocket strike to our base and we lost three soldiers on the base while we were there,” Jaden said, “It definitely was an eye opener, like holy crap this is real, this is where I am at right now, I am being shot at by people who I don’t even know, for some unknown reason, just because they don’t like what I stand for and I am here because I do not like what they stand for.”

Jaden spent a total of five months deployed in Iraq while on his first deployment of his military career and he said he will be up for another deployment rotation this coming year.

While Mark begins his retirement, he said he’s “more than proud” of his son and his achievements, being more decorated than most who have served two years. Jaden recently reenlisted in the Army for six more years, with goals of becoming a warrant officer.

“He has accomplished a lot for someone who has been in for only two years, to say that you’re proud of him would be an understatement,” Mark said. “One percent of our nation serve in the military, and out of that 1%, he has done more than half of the 1% that are serving."

Jaden said being apart of a supportive military family has played a significant role in his life.

“My mom (Christi) has always been highly supportive of me. It was really tough for her when we deployed due to the fact that I was home when it happened, and the fact that my dad was already over there and deployed. So, it hit her and my sister pretty hard, that both me and my father were being taken away from them, and they didn’t know when they would see us again. But overall she does really well, she supports me 110% in whatever I want, and she supports me in the military because she knows its a good choice for me and she knows its where I belong,”

Christi said, “Even though I would like to have him closer, I know that he is where he needs to be and I have always supported all of his decisions.”

Jaden and Mark agree a military experience is something they both highly encourage.

“I am not going to lie, there is a lot of stuff in the military that is difficult, but do I think its a good experience that more people need to have. Absolutely,” Jaden said, “If you get out of high school and you aren’t sure on college, stuff like that, without a doubt, I think a few years enlistment with the National Guard or the active Army is the best route anybody can go.”

Going into the Fourth of July holiday, Jaden said, he hopes people take the time to remember the soldiers who weren’t as lucky as him to be back home from deployment.

“I think one of my biggest things is people just to remember those who have fallen and those who have given the ultimate sacrifice to keep us free. And in today’s society too many people have forgotten. I think that is what really gets me the most, how many people have forgotten about our soldiers who are over there still fighting and will continue to fight for people back home.”