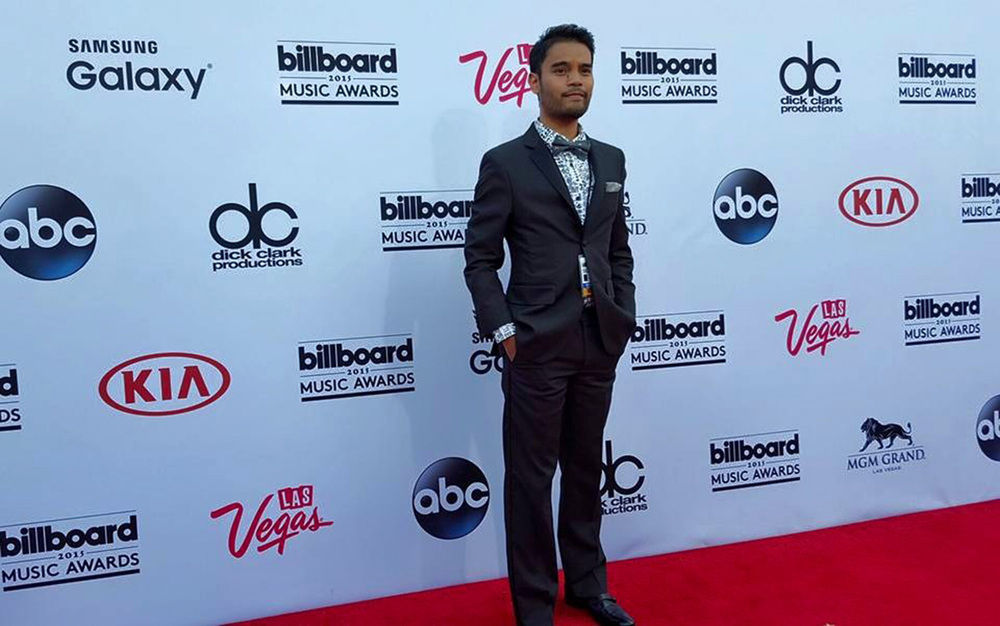 Brian Hernandez on the red carpet at the 2015 Billboard Music Awards. 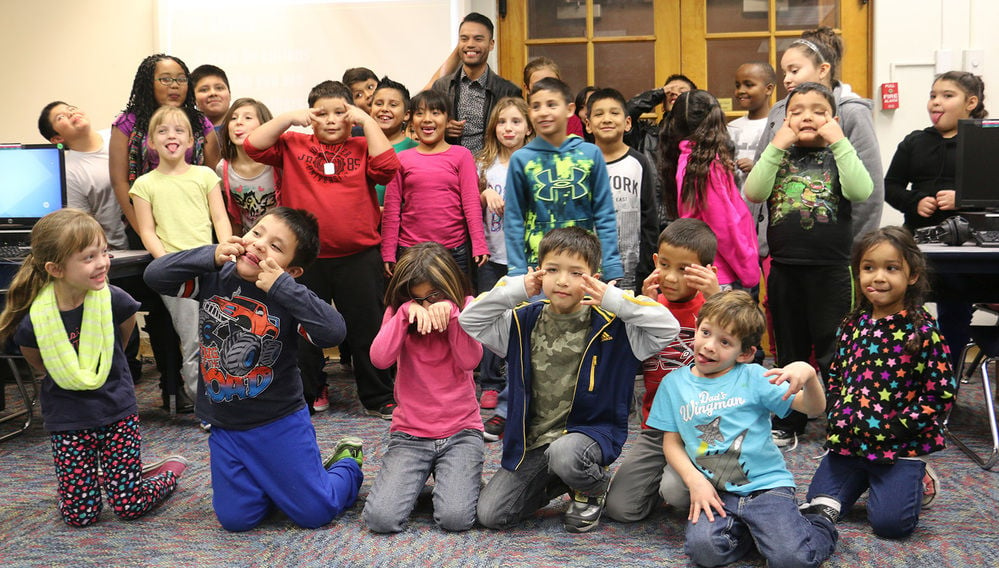 Brian Hernandez, center back row, encourages students to make funny faces for a photograph. The students are part of the after school program at Roosevelt Elementary School in Scottsbluff and Hernandez came to encourage them to pursue their dreams. 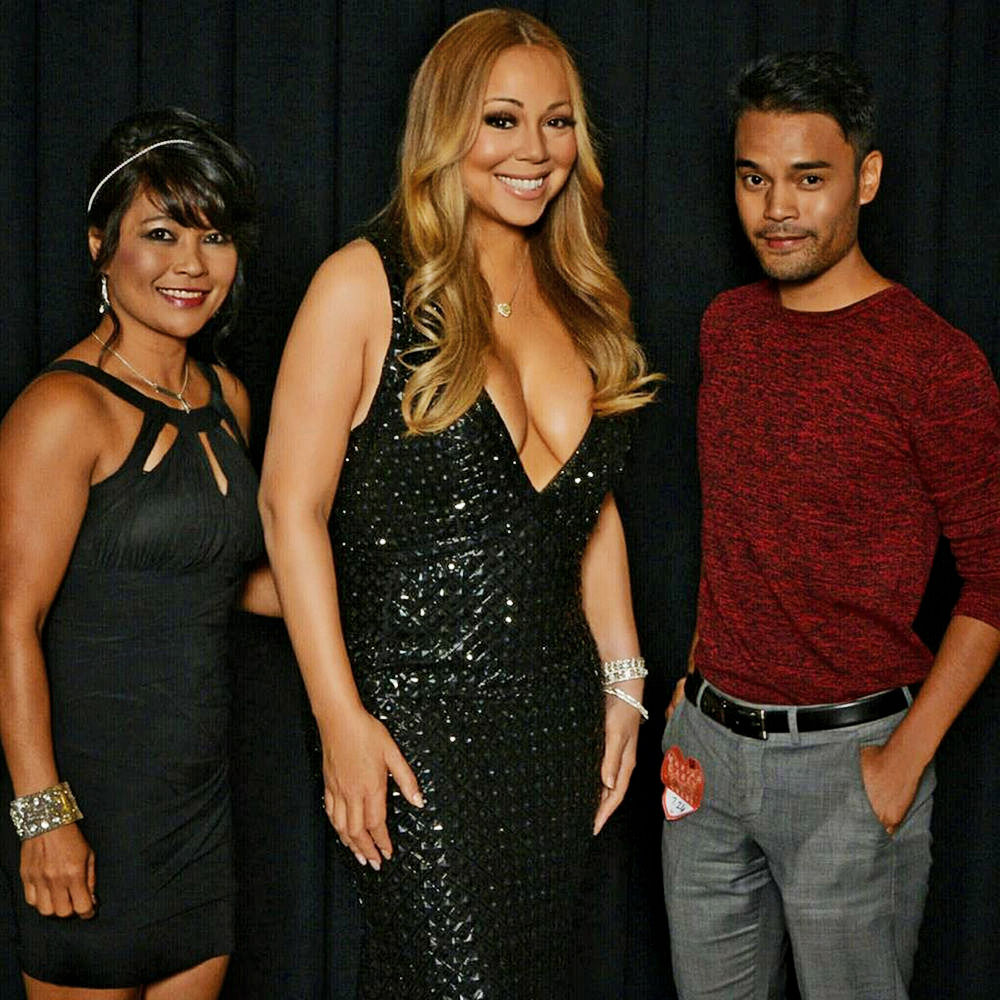 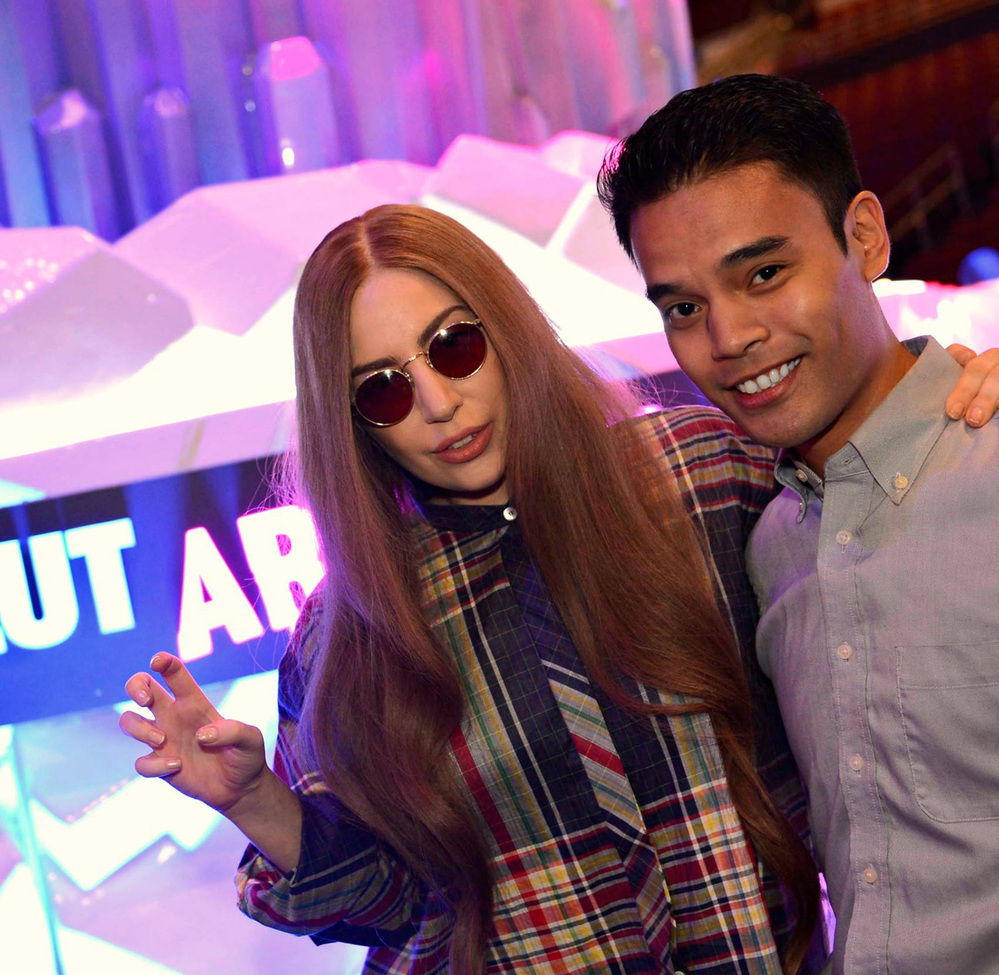 Scottsbluff native Brian Hernandez always knew he wanted to be a journalist. He returned to town Thursday to share his life and inspire young students to achieve their dreams.

When Brian Hernandez sat down for an interview, the only available seats in the library were little, orange chairs designed for elementary children. He marveled at how small the library at Roosevelt Elementary appeared. He was sure it was much bigger as a child.

Hernandez, now a entertainment journalist living in Los Angeles, shared his fond memories of his school days with Roosevelt students in the after school program. He played a game with them to see if they could recognize celebrities he has interviewed. The children didn’t know who Carrie Underwood was, but wanted to know why Hernandez had a beard in the picture with her, but doesn’t have one now. They all enjoyed photos of Lady Gaga.

Hernandez shared life lessons with the children. He told them to always be curious.

“One of my favorite books was ‘Curious George,’” he said. “I always asked why. I probably annoyed the heck out my teachers, but I always had questions.”

He also said you should love who you are, be kind to others, dream big and set goals.

Hernandez’ favorite subject was English because there was always an opportunity to write, he said.

His first endeavors into the world of journalism was delivering newspapers for the Star-Herald and writing at Roosevelt Elementary. His first journalism award was at Roosevelt and he was part of a team that won the trivia bowl championship.

In college, he spent each summer on an internship with a different major newspaper, including Des Moines, Milwaukee and Phoenix. He also worked briefly as a copy editor for the Star-Herald. After college he worked in Phoenix. Hernandez always wanted to live in New York, so he quit his job and moved East, eventually being hired by the digital media website Mashable. He started as the site’s first copy editor.

His passion for entertainment soon saw him interviewing Lady Gaga. He became the associate entertainment editor and coordinated coverage for major events, such as the Oscars, Emmys, Grammys and MTV Video Music Awards.

Hernandez has made a name for himself in the industry and the combination of reporter and expert has been noticed. He is consistently seen at events talking to celebrities, agents and record labels. He has nearly 180,000 followers on Facebook and more than 20,000 on Twitter.

“My knowledge of the industry is different because I started out writing about crime and courts,” he said. “Those are important skill sets to have.”

He left New York for Los Angeles in January to become a full-time freelancer.

“It’s risky not to have a regular, full-time job, but I’m confident in my skills that I can tackle the entertainment world more as a expert,” he said.

His stories have been picked up by media outlets around the world and he moderated panels for South by Southwest, Ad Week, Social Good Summit, Media Summit, Northside Festival, Capitol Congress and more.

Hernandez is most well-known today as a music writer and media personality. He has hosted two live streams at the American Music Awards. He will be spending much of 2016 contributing stories to Forbes and Billboard.

The West Coast is a good fit for Hernandez.

“I love to run and New York was very hard to run in,” he said. “In L.A., I’m doing more outdoor activities.”

He has also found a way to strike more of a work/life balance, eating healthy and not drinking.

Even with his accomplishments, Hernandez still has the same worries before an interview like any other journalist. He usually has five to 10 questions memorized. They’re a mix of serious and fun. If he’s on camera, he may use note cards in case he freezes.

“I get nervous because you want to do well,” he said. “There’s always nerves.”

On his first interview with Daniel Radcliffe, he worried he would call Radcliffe "Harry Potter."

He has only been at a loss for words twice. Once was with Rhianna.

“At the Oscars three years ago, I expected to see actors, then Keith Urban passed by,” he said. “I had no words.”

As a young boy, Hernandez’s mother, Maria, used to sing songs by Mariah Carey to him. For his 29th birthday this year, Hernandez took his mother to Las Vegas to meet Carey. Hernandez helped her prepare a sentence to say in case she was star struck and couldn’t think of anything.

“It was so cool to see how big my mom’s smile was during the concert,” he said. “It was nice to give back to her after she gave me so much.”

There were smiles and tears after the show.

“That was my fourth encounter with Mariah,” Hernandez said. “Two years ago, during an interview, I told Mariah about my mom. She left a message for my mom while we were recording the interview and said ‘Your son’s a great interviewer.’”

When Hernandez posted about it online, the video went viral.

“My mom still talks about it,” he said.

Hernandez is proud of being known in the entertainment industry for being a minority. He looks up to people like Mario Lopez who provide diversity.

“If these kids aren’t seeing people who look like them, they may never be inspired,” he said. “Hopefully, I inspired one kid today.”

It’s always a pleasure for him to come back and see people. On a trip home last year, some people recognized him and came up to say hello.

“It’s always interesting when you’re in Walmart and do not know who you’re talking to,” he said. “The first thing I mention is family and who they’re related to, and then I know who they are.”

Hernandez is still setting goals for himself. In the next year, he wants to learn sign language. Several students showed him some words they could sign. He also plans to write a book. He has a tattoo that says “no regrets.” It’s how he lives his life, he said.

“I live life thinking that everything bad that happens is a learning experience,” he said. “There are people all around the world dealing with harder things. I’m grateful for my family, my career and my health.”

Though he’s interviewed celebrities and walked the red carpet, Hernandez remains humble to his beginnings. He stopped drinking in May to be a better role model.

“I love having mentors in my life and hopefully I can be one,” he said.

Brian Hernandez on the red carpet at the 2015 Billboard Music Awards.

Brian Hernandez, center back row, encourages students to make funny faces for a photograph. The students are part of the after school program at Roosevelt Elementary School in Scottsbluff and Hernandez came to encourage them to pursue their dreams.