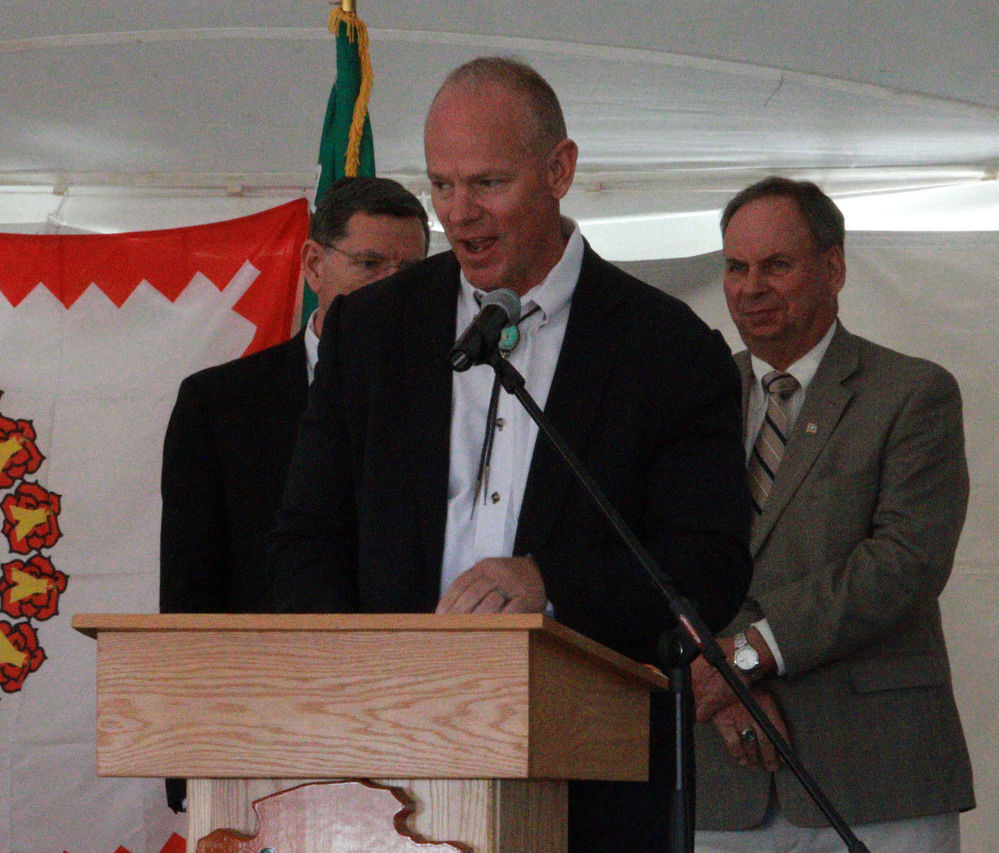 Wyoming Governor Matt Mead was one of the state government representatives at the 1868 Treaty of Fort Laramie commiserations on Saturday. Mead highlighted recent state legislation meant to improve life for Native Americans in the state. 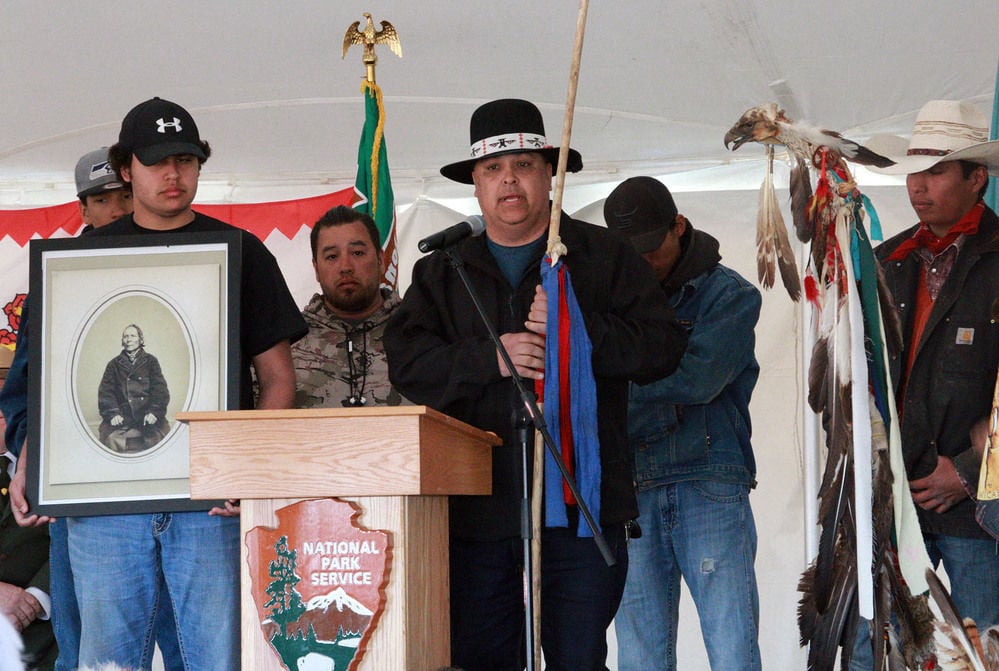 Chairman Dave Flute of the Sisseton Wahpeton Oyate on the Lake Traverse Reservation is the grandson of one of the original Santee signers of the 1868 Treaty of Fort Laramie.

Tribal leaders and riders race around the Native American camp prior to the opening of Saturday's 1868 Treaty of Fort Laramie talks.

FORT LARAMIE, Wyo. — State, federal and tribal leaders met at the Fort Laramie National Historical Site this weekend to commemorate the sesquicentennial signing of the 1868 Treaty of Fort Laramie.

The treaty, as originally written, was to set aside land, including the Black Hills of South Dakota, for the northern plains Indian tribes. The failure to abide by those terms has left great tension between the tribes and the government 150 years later, as evidenced by the opening talks given by the tribal leaders on Saturday.

Representatives and tribal leaders from throughout the Great Plains attended the meetings, including the Northern Arapaho, Northern Cheyenne, bands of Lakota and Dakota Sioux and Crow Nation, to talk about the history of the treaty and their futures.

Fort Laramie Superintendent Tom Baker opened the day by talking about the importance of coming together, despite the history of the treaty.

“We need to work together to improve life for our indigenous nations and improve how we work together for the good of all people,” he said. “We are, after all, one people.”

Harold Frazier, chairman of the Cheyenne River Sioux, was disappointed that, while the tribal leaders had been able to come, some on horseback, to the treaty commemoration, the leaders of the federal government had not done so as well.

“What’s very upsetting is to come all this way on horse. Where is Trump?” he said. “Where is (Interior Secretary) Zinke? Where are the decision makers of the federal government? We will no longer be wooden Indians. We are human beings like they are. We need to be treated with respect.”

He pointed out that, on his way to Fort Laramie, he was restricted on the land he could ride on, and pushed for the tribes to regain their lands.

“What I want to do is come up with a doctrine of recovery,” he said. “What gave France the right to sell our lands to the United States through the Louisiana Purchase?”

Many of the tribal leaders were in agreement with Frazier, while others looked back at their ancestors who signed the 1868 treaty. Northern Arapaho Tribe Chairman Roy Brown said he sat down Saturday morning to figure out how the tribal signees felt when the treaty was first signed.

“I wanted to help myself get a better understanding of what my ancestors went through, of what they were feeling 150 years ago,” he said. “I sat there, the sun rays coming down on me and I listened. I know they felt anguish. This wasn’t our first time. We had been here before, we had suffered through this before. I know they had distrust. They were frustrated, they were angry. But I think through all of that, there was hope. They sat here, with the leaders of the other tribes, hoping for a better future for their young ones. It is through that hope that came resiliency and courage. It is those things that is how we can say we are still here.”

Lawrence Jace Killsback, president of the Northern Cheyenne, added that the tribes will have to work for a better future among themselves as well.

“The sad thing about it is that I think I need a treaty for my own people, for the drug dealers in my community, the gangsters in my community, because that’s who’s killing my people,” he said. “I couldn’t care less if Zinke or Trump came, because we know what their policies are doing to our tribal governments. I’m talking about the traditional leaders, the headsmen, chiefs, the young people, the young warriors. What are we going to do back home? How are we going to protect ourselves?”

The federal government’s tendency to go back on treaties, he said, shows that change won’t come from national policy.

Killsback said the tribes need to use the treaty’s commemoration to focus on reforming their own governments.

“We need to look at developing tribal governments that work for us, tribal government reform that incorporates our cultural leadership values,” he said. “Respect, humbleness, generosity are shared values, but we’re not practicing those.”

For the state and federal government, Sen. John Barrasso and Rep. Liz Cheney recognized the importance of the treaty. Gov. Matt Mead spoke to the tribes, pointing to the state’s recent recognition of the event.

“Out of respect to the tribes, I was pleased that the Wyoming Legislature passed a resolution in the 2018 session regarding today’s commemorative event,” he said. “It also supports nationwide public education about the heritage, history and contributions of Native American tribes and asks the federal government to uphold its federal trusts and responsibilities.”

The commemoration continues Sunday and Fort Laramie will have special programs about the treaty through May 1.

Wyoming Governor Matt Mead was one of the state government representatives at the 1868 Treaty of Fort Laramie commiserations on Saturday. Mead highlighted recent state legislation meant to improve life for Native Americans in the state.

Chairman Dave Flute of the Sisseton Wahpeton Oyate on the Lake Traverse Reservation is the grandson of one of the original Santee signers of the 1868 Treaty of Fort Laramie.

Tribal leaders and riders race around the Native American camp prior to the opening of Saturday's 1868 Treaty of Fort Laramie talks. 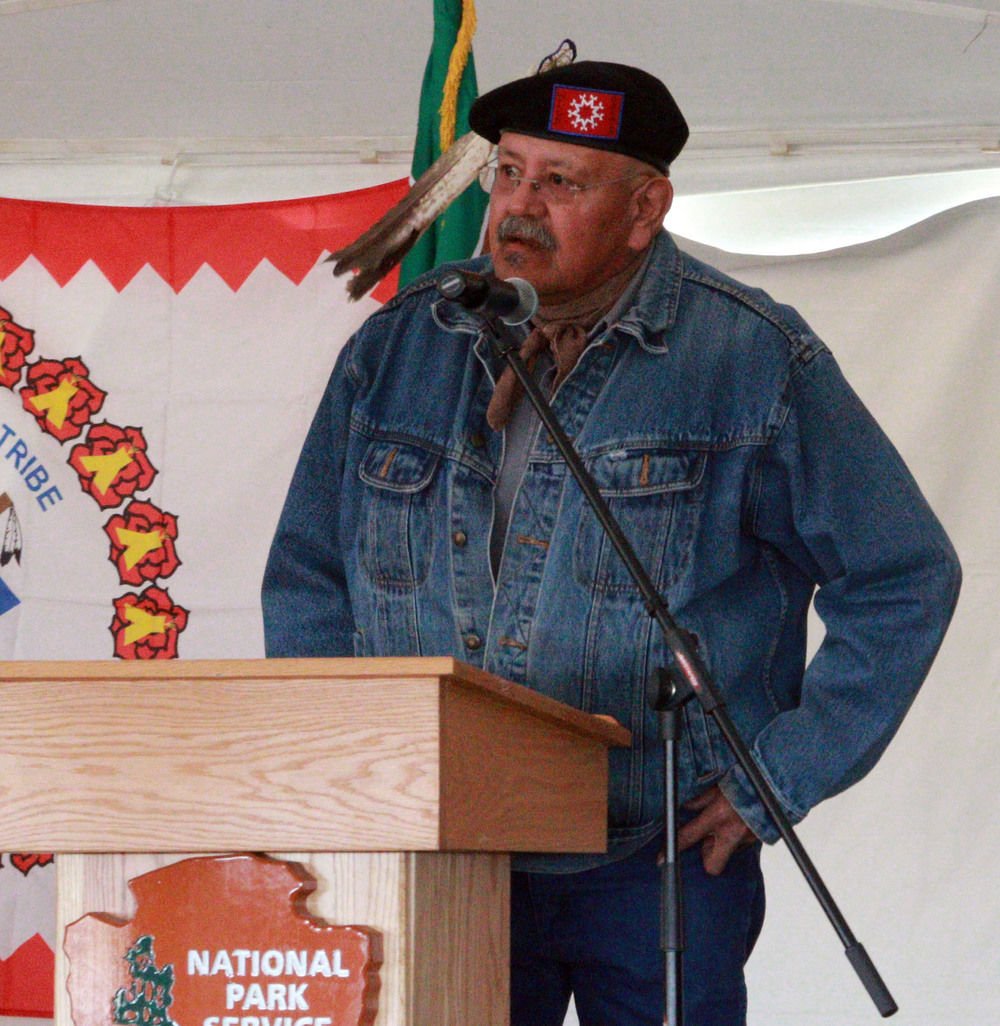 Representing the Oglala Sioux, CJ Clifford . "We road a lot of miles throughout the years to deal with the government in Washington and their so-called 'consultations," he said. "I'd like to have seen (Secretary Zinke) here and the president of the United States." 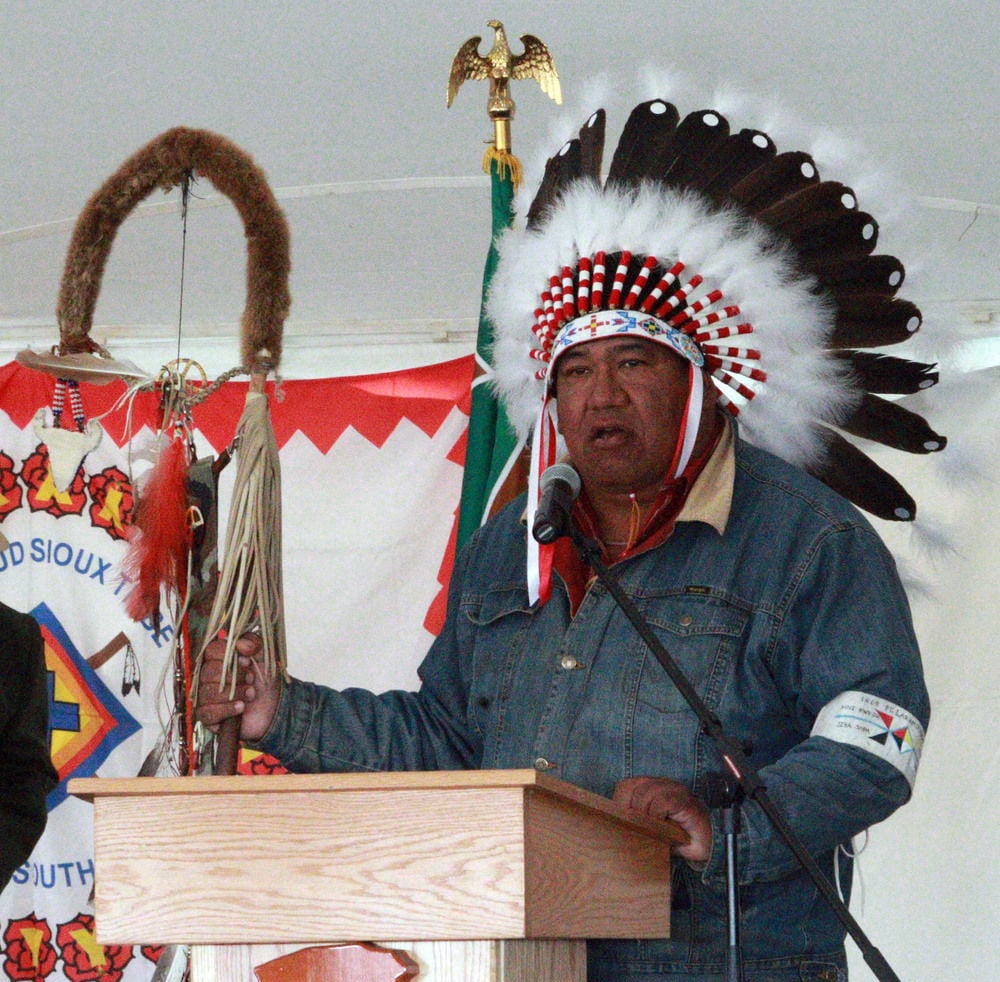 Cheyenne River Sioux Tribe Chairman Harold Frazier said he was frustrated that President Donald Trump and Interior Secretary Ryan Zinke did not attend the 1868 Treaty of Fort Laramie talks. "I carry this staff....to remind me to be a warrior for our people," he said.