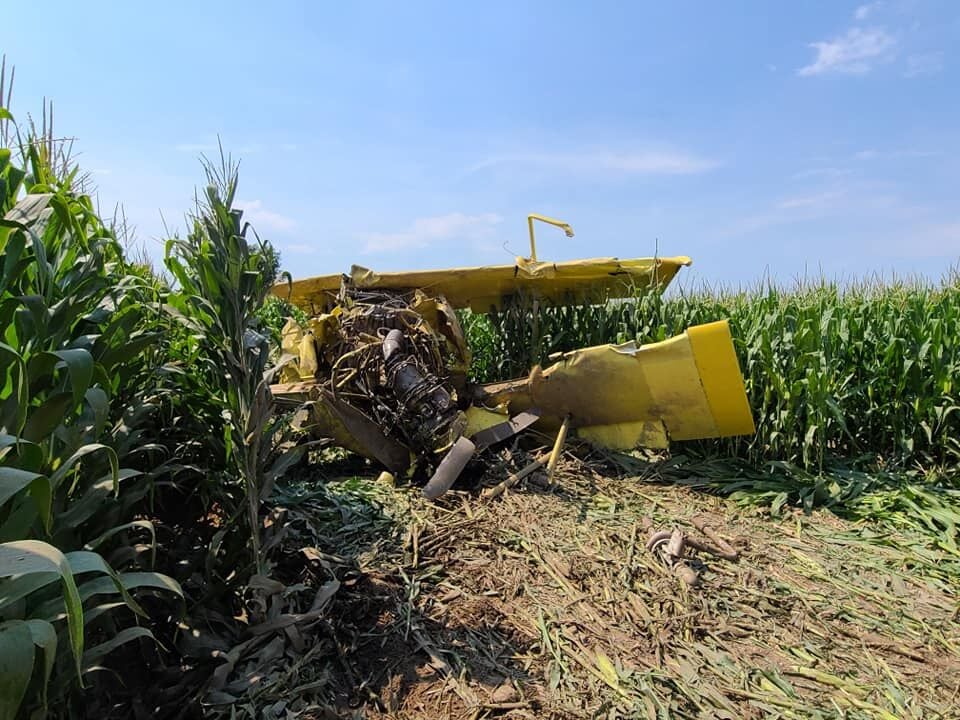 Officials described a crop duster involved in a plane crash as "mangled." Region 22 Emergency Management Director Tim Newman shared this photo of the plane. The pilot was transported to Regional West Medical Center for injuries. The pilot had been spraying an insecticide at the time of the crash. 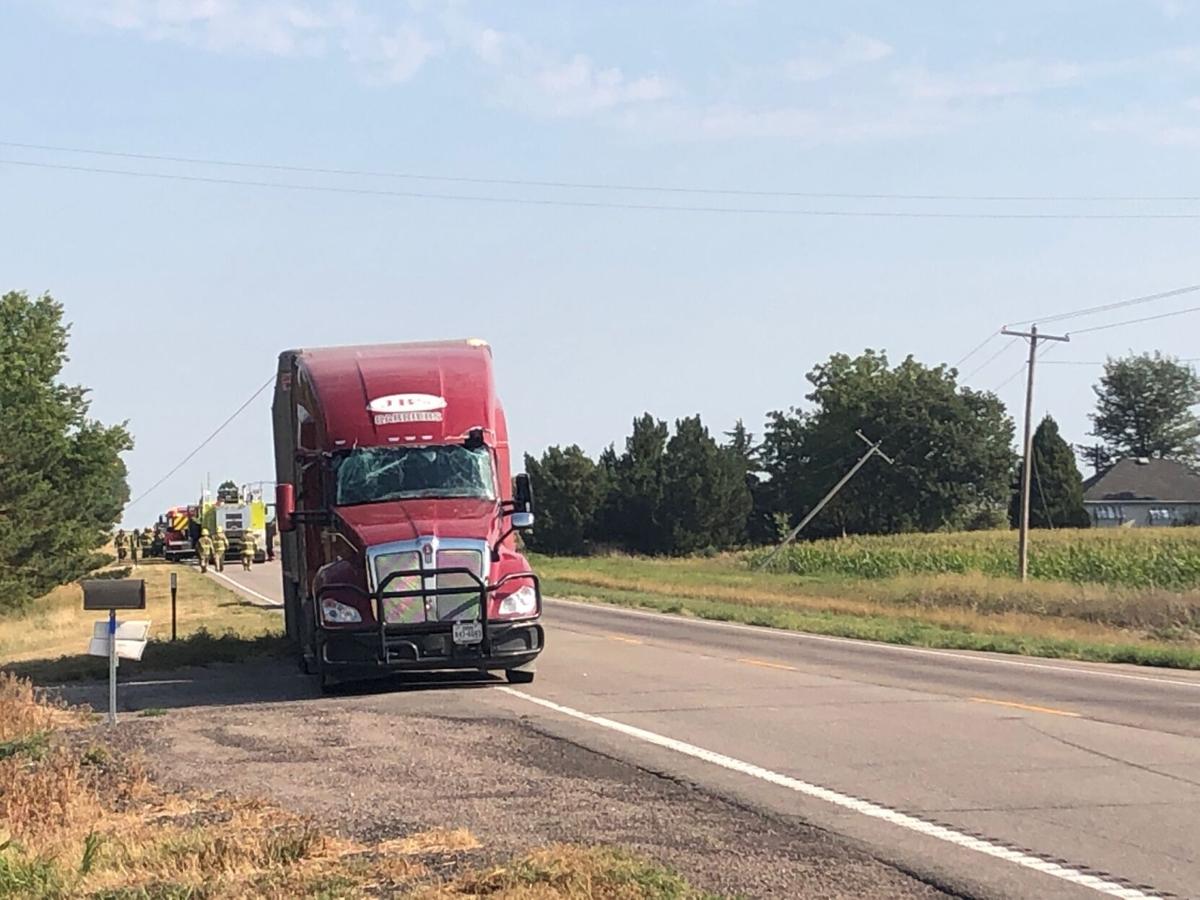 A 60-year-old man is being treated for injuries after crashing a plane in a corn field along Highway 71 Tuesday morning.

The crash occurred north of County Road G. The field was described as north of the Tri-State Canal and south of Lake Minatare Road.

Overman described the plane as “mangled.” The pilot, Mike Uhlken, described on scanner traffic as a 60-year-old man, had been transported to Regional West Medical Center. He was complaining of chest pain and other injuries. He had also been doused in an insecticide that he had been spraying.

Mark Becker, with Nebraska Public Power District, said that the crash impacted five miles of transmission and distribution lines. He said that it impacted 2,400 customers, resulting in an outage. NPPD’s system that monitors outages had been in the process of being upgraded, so initially, the power company didn’t receive notification of the outage. The outage impacted Western Nebraska Community College, Regional West Medical Center and others throughout Scottsbluff.

“We are hearing from our control center that the majority have been cleared and are back in service,” Becker said at about 11 a.m.

Nebraska Public Power District Scottsbluff Superintendent Dennis Wademan said there were 33 properties just before noon still without power and 20 poles were knocked down because of the crash.

Overman said the sheriff’s office is collecting evidence but the investigating entity is the National Transportation Safety Board. Other responders included Gering Police Department to use a drone to take photos of the crash.

Tony Schmid, a manager overseeing crop planes for the company, declined to comment.

The Scottsbluff Fire Department Hazardous Materials Unit responded to the scene because of the concentrated pesticide.

Neal Heil, a groundwater geologist with petroleum remediation at the Department of Environment and Energy, said WESTCO will most likely be responsible for cleaning up the plane’s fuel and the pesticide.

“Generally speaking, the cleanup is performed by the spiller and the department will follow up as necessary to see it’s done properly,” Heil said.

The driver for the cattle truck, identified by authorities as Jerry Joe Landin, told the Star-Herald that the crash happened in an instant.

“I’m just driving along and suddenly boom, crash. I had time to think ‘What the heck?’ And pretty much it just stopped me in my tracks here,” he said, adding that he didn’t see the wires or the plane.

Landin said the 35 cattle he was driving to Greeley, Colorado, seemed to be unharmed in the crash, though he couldn’t touch the truck due to the powerlines.

Over the hours, the cattle would frequently scuffle, mooing and shifting the trailer. They were finally put in a second trailer and taken back to Chandler Feed Company about four hours after the crash.

Landin suffered a head injury but was not transported to the hospital.

Tim Jerger, the property owner, said he and his wife were in the driveway taking photos of the crop duster spraying pesticide on the farm, which he rents out, and heard the crash.

“I just knew what happened, right away,” he said.

He said after calling 911, he found the pilot in the cornfield.

“I took my three-wheeler up there and walked through the corn I ‘spose maybe 60 feet, I didn’t count the rows,” he said. “The plane is upside-down, Mike (the pilot) is sitting on the edge of the cockpit, conscious and talking and I helped him get up and walked him here to the house.”

With the power off, Jerger said he had to clean the pilot with a water jug, waiting for the ambulance to arrive.

Jerger said he thanked God no one was killed and the crash wasn’t worse.

“At least it didn’t tip the trailer, we would’ve had cows running around with the power lines and the crops,” he said. “This could have been much, much worse,” he said.

Law enforcement diverted traffic near the scene for several hours, at County Road H and Lake Minatare Road. Other roads closed in the area were County Road G, County Road 19 and County Road 22, according to road crews.

After 10 years, a Panhandle horse will return to his childhood home

In 2011, Meghan Fry of North Carolina was stationed in Wyoming when she had to sell her childhood best friend, Jedadiah, a horse.

he entertainers announced and added to the 2021 lineup are Garth Brooks, Blake Shelton, Eric Church and Thomas Rhett, to name just a few. Ned LeDoux will perform with Brooks as the 125th Cheyenne Frontier Days™ celebration is dedicated to the legendary Chris LeDoux.

SIDNEY —WNCC Aviation students Yemin An, 21 of Seoul, South Korea, and Zhaoxin Chen, 24 of Xi'an, China, were identified Monday as the two stu…

A person wanted on a warrant was arrested after a standoff in Scottsbluff Monday.

Authorities are investigating an officer-involved shooting that occurred early Saturday in Alliance.

Chadron Police are investigating the death of a 27-year-old Chadron man that occurred on Friday, April 2.

The recent swings in temperatures and moisture took a toll on Scotts Bluff National Monument this week.

The Alliance Fire Department has responded to a fire at the BNSF depot.

Officials described a crop duster involved in a plane crash as "mangled." Region 22 Emergency Management Director Tim Newman shared this photo of the plane. The pilot was transported to Regional West Medical Center for injuries. The pilot had been spraying an insecticide at the time of the crash.