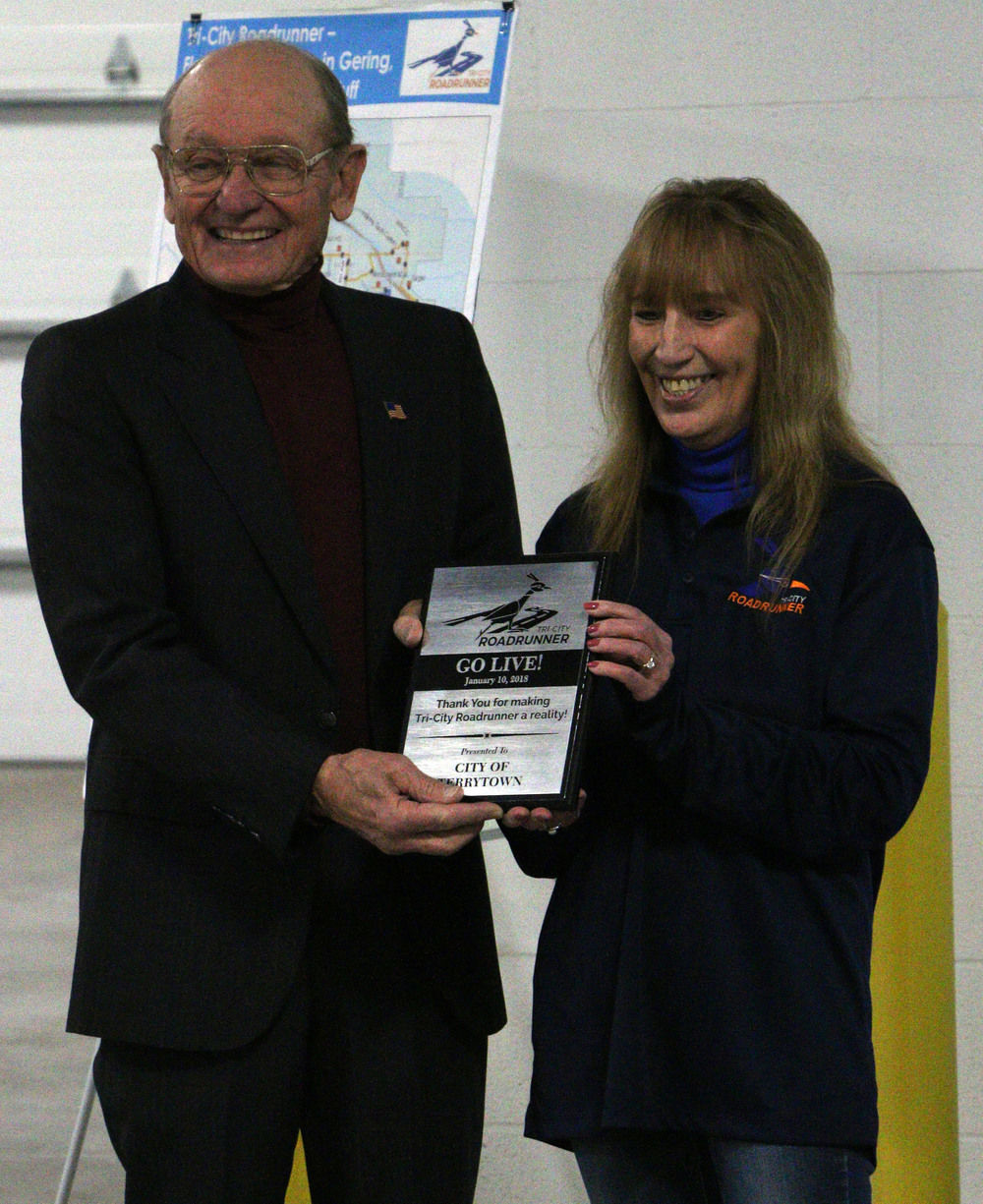 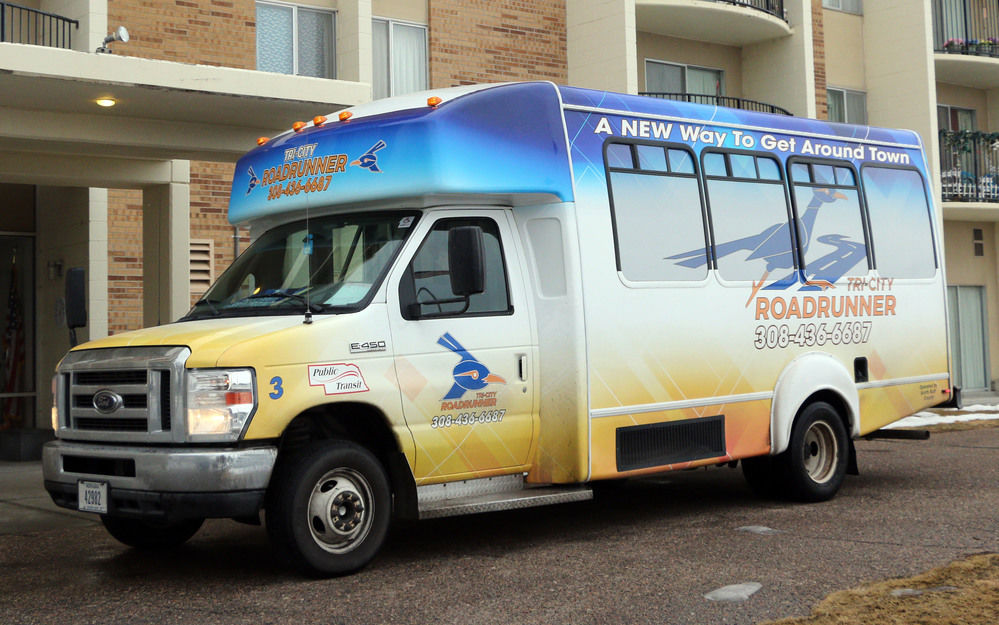 A Tri-City Roadrunner bus parks in front of the Dome Rock Manor in Gering. The new public transportation system is the third fixed route system in the state.

Over 40 people attended the ribbon cutting ceremony for the new public transit system, held at the county’s bus barn in Gering. This is the third fixed route schedule in the state, following Omaha and Lincoln.

Tri-City Roadrunner, formerly Scotts Bluff County Public Transportation, began a two-route service, the orange and blue routes, that will transport passengers between Gering, Terrytown and Scottsbluff. Transit Manager Shari Hinze said the service currently has four buses and 14 drivers. The drivers will likely go up to 18.

The move from a non-fixed route busing system to a fixed route started two years ago, Hinze said, when the community started asking about it.

“The community was coming to us all the time asking why we didn't have one,” she said.

Hinze has been part of the county’s public transport system for two years as a coordinator and began running the handy bus program in June. As transit manager for Roadrunner, she will keep the new transit system on the road.

“I make sure these buses are up and running, sticking to their times, getting people where they need to go on time, and giving our community a wonderful service,” she said.

While she’s uncertain how many people will use the bus, Hinze said she has gotten calls from people excited to use the service.

“They’re ready to be out at those bus stops,” she said. “They don’t have to call to make a reservation, they can just jump on and go.”

At the ribbon cutting ceremony, Tri-County Roadrunner’s partners all received plaques to commemorate the event. These included private partners, like Walmart, all three city governments, the county government, Nebraska Department of Transportation, and the Region 7 Federal Transit Administration.

Mokhtee Ahmad, regional administrator for the FTA, traveled from Kansas City to take part in the event.

“We wanted to show you how strong our support is for this service,” he said.

Roadrunner’s routes go from as far south as Second and A Street in Gering to as far north as Regional West Medical Center in Scottsbluff. A press release from the service says there are approximately 130 stops set up throughout the three cities. The service runs two northbound buses and two south bound buses, split between the orange and blue routes, that cover the majority of the tri-city area from 6:30 a.m. to 6:30 p.m. Monday through Friday. Inside the tri-city area, a one-way trip will cost $2 and an additional dollar for a deviated route. The service will also have day and month passes for unlimited rides for $5 and $45. Western Nebraska Community College students will be able to use their school IDs to ride the service for free.

Kent Greenwalt, mayor of Terrytown, believes the public transit system is important for his citizens.

“A lot of them can’t afford a car, or maybe they can’t drive anymore,” he said. “This is going to be a big asset to them.”

County Commissioner Mark Masterton said the day was the culmination of years of work.

“We’ve recognized the need for some 25 years,” he said. “We’re a growing community and this is just part of our economic development.”

The development of public transportation to a fixed system has been long time coming, he said.

“It’s been very intense the last two years,” he said. “It’s pretty complicated to put this together in two years and we’re very proud of it and we’re very happy with the cooperation we’ve gotten from the various entities where we’ve got the stops.”

Outside of the tri-city area, Roadrunner will continue to offer transportation on an appointment basis.

A Tri-City Roadrunner bus parks in front of the Dome Rock Manor in Gering. The new public transportation system is the third fixed route system in the state.