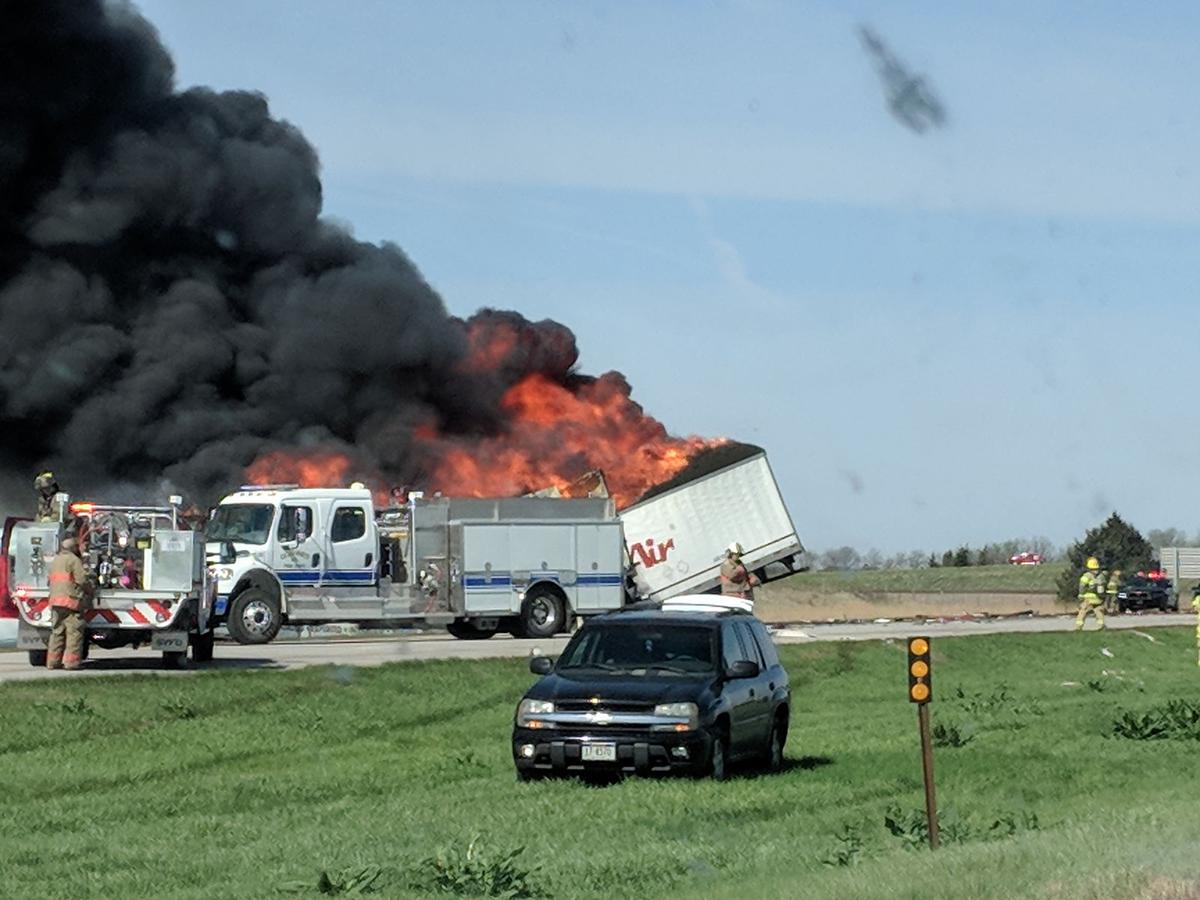 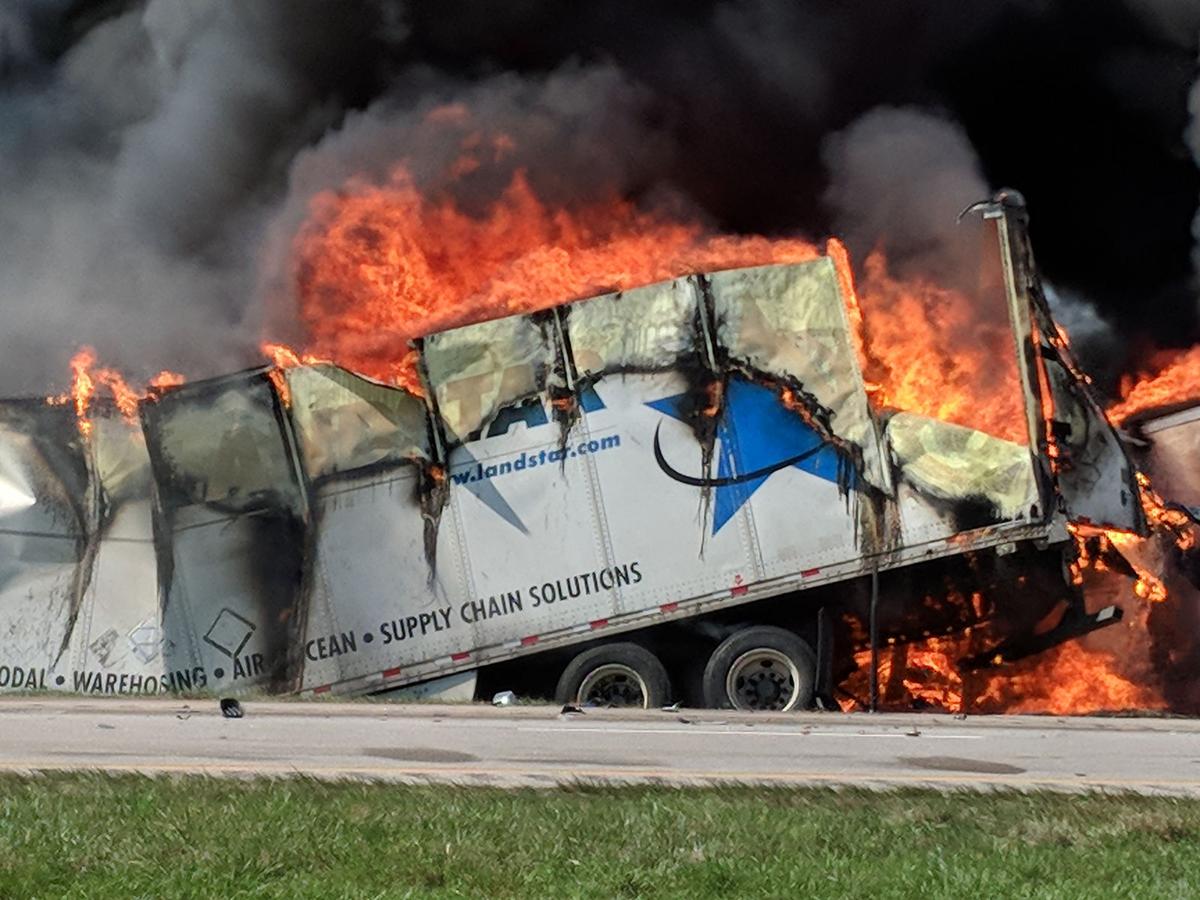 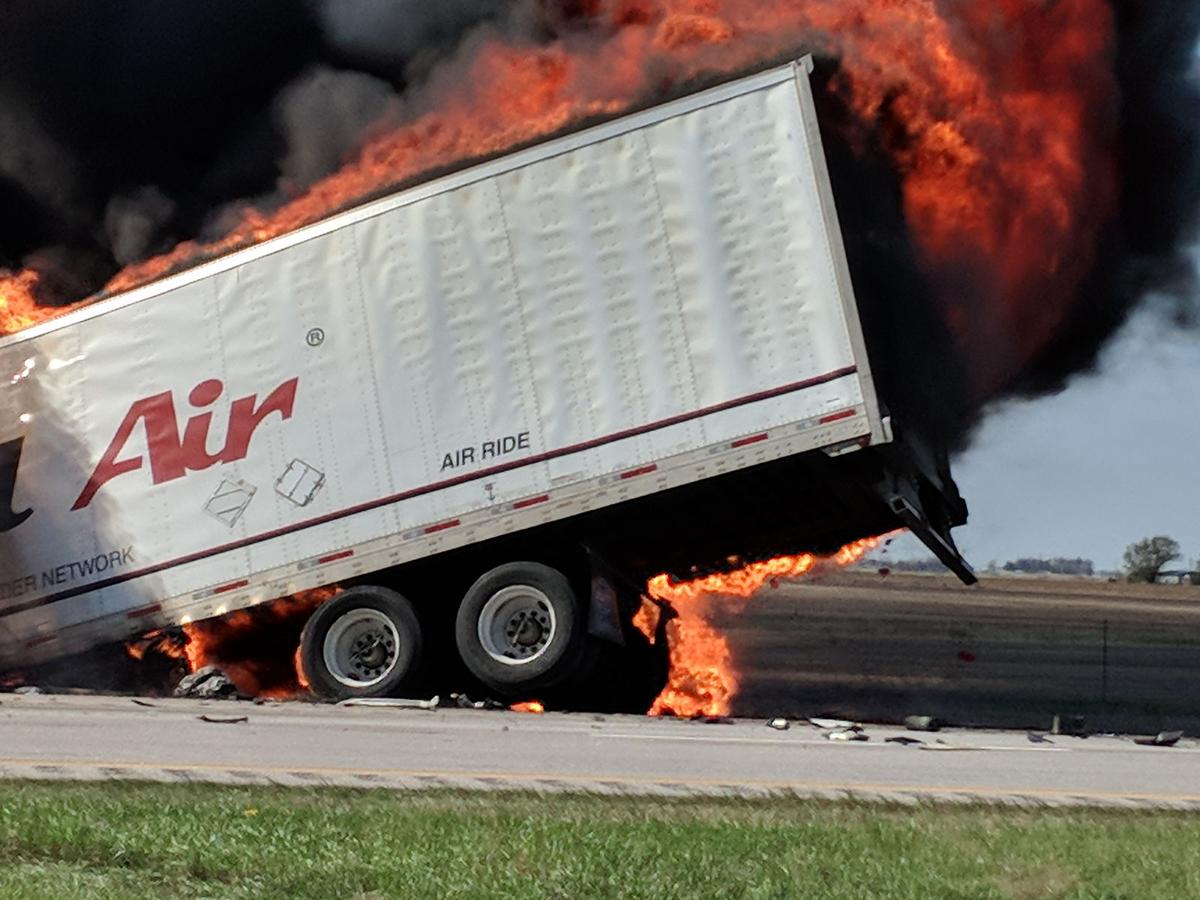 Five people were killed in collisions Sunday between Lincoln and York on Interstate 80.

The first collision claimed four lives, and traffic problems related to it may have contributed to two other crashes, said Cody Thomas, a spokesman for the Nebraska State Patrol. The crashes all occurred on eastbound I-80 over a span of about four hours and within 14 miles of one another, according to the patrol.

In the first collision, a car left westbound I-80 and collided with a vehicle in eastbound I-80, blocking traffic there. Behind that backup, a semitrailer truck driver who may have been texting failed to slow down and collided with traffic in front of him, leading to his death and a fiery wreck, Thomas said.

The crashes closed I-80 eastbound temporarily, and when the Interstate reopened, traffic was nearly at a standstill, according to Nebraska 511.

"It's been a bad day on I-80 between Lincoln and York with multiple fatality crashes," the State Patrol tweeted.

The crashes were at mile markers 367, 378 and 381, which places them near the Beaver Crossing, Seward and Milford exits respectively.

The NSP helicopter landed on the Interstate to assist at mile marker 367.

The names of those involved in that crash are being withheld pending notification of family, Yocum said.

About 10 a.m., Abdiaziz Jama, 33, a semitrailer truck driver from Columbus, Ohio, drove into the rear of another semi, causing a chain reaction that included a third semi and a Ram pickup.

Jama died and a passenger, Mohamed Apdullahi, 30, was taken to the hospital with injuries not believed to be life-threatening.

Investigators believe that Jama may have been texting at the time of the crash, according to a statement from the patrol.

Then, at 11:35 a.m., the driver of a Chevrolet SUV failed to realize that traffic had slowed and consequently rear-ended a semi. The driver of the SUV, Jeffrey Eymann, 68, of Grand Island was taken to the hospital with injuries that aren't believed to be life-threatening.

The Nebraska State Patrol says a man and a woman died in southeast Nebraska in what authorities believe to be a murder-suicide.

The Willa Cather Foundation is not seeking designation of a National Heritage Area, but a group of volunteers "has been working to explore the merits" of the idea, the foundation's director said.

Experts say the case shows how important it is for consumers to be savvy about using ATMs and gas station pumps and to take care to shield their PIN from a possible hidden camera.

In addition to long-lasting love, the marriage took place partly for legal reasons. If the groom were to go on a ventilator, there would be fewer complications if his partner was his wife.

A Nebraska prison inmate has sued the state, saying that her right to obtain an abortion has been unconstitutionally blocked by prison officials and that she needs the procedure by next week.

The rail company agreed to pay $140,000 as part of a settlement stemming from a 2019 train derailment that led to a fuel spill.

Police in Casper, Wyoming, made almost 400 traffic stops over 14 hours in a federally funded effort to crack down on marijuana.

Ricketts levels broad attack on Biden and his agenda

The governor said the Democratic president is aggressively pursuing "a far-left agenda" that would institute federal takeover of state elections, squash religious freedom, expand abortions and trample on gun rights.

No dissenting votes on Nebraska's $9.7 billion budget proposal in first round

A bigger fight is looming Friday, when lawmakers take up the state's capital construction budget and an amendment to prepare designs and select a site for the proposed $230 million prison.