LINCOLN — Nebraska's major media outlets objected Friday to a new credentialing process announced by Gov. Pete Ricketts, saying it was "a red flag" for First Amendment rights and advising newspapers and broadcast outlets to not apply.

Members of Media of Nebraska, which represents the state's print and broadcast media, said the new credentialing process is concerning because it appears arbitrary and allows the governor to "grant access to some media outlets but not others."

That, Media of Nebraska argued in a two-page letter to Ricketts, runs afoul of federal court rulings that restrict the government's ability to "selectively regulate" press access, unless done in a "content neutral" way in pursuit of legitimate government interests.

While the governor's new credentialing form, released on Thursday, mentioned "operational limits" and "security reasons" as justifications for the new policy, the media group said the application form asks many questions that don't seem related to those goals, such as how a media outlet is financed. The new process, Media of Nebraska added, also doesn't describe what causes approval or denial.

"Failing to be transparent about what information tends to result in approval or denial disregards the importance of relating the questions in the application to a legitimate governmental purpose and, as such, smacks of arbitrariness," the letter stated.

Media of Nebraska, in its letter, offered to meet with the governor to work out "a reasonable approach" to providing media access. But until then, the group urged its members, which include The World-Herald, to not apply.

Ricketts' office, which received the letter Friday morning, did not respond immediately to a request for comment. In announcing the new policy on Thursday, the governor said it was based on "neutral criteria" and that "no single factor" would result in approval or denial.

The issue of access to the governor's media briefings was sparked by Ricketts' recent denial of press credentials for NOISE Omaha, a North Omaha-based news website focused on covering stories that impact the city's minority communities.

Ricketts' office had denied access to NOISE, saying it was “an advocacy organization funded by liberal donors,” and not a mainstream media outlet, like those that traditionally receive press credentials.

The denial prompted concern from the ACLU of Nebraska and criticism from two journalism professors. They questioned the denial of NOISE, which stands for “North Omaha Information Support Everyone,” and said the website was part of an evolution to more website-based journalism.

A joint editorial in both The World-Herald and Lincoln Journal Star called the denial a “political decision” that “smacks of authoritarianism.”

The dustup prompted the governor's office, on Thursday, to release a new application form for media to complete to become credentialed to cover briefings by the governor, which are traditionally held at a hearing room adjacent to his State Capitol office.

The form includes a variety of questions, including whether a reporter seeking credentials is a paid employee and a full-time staffer, and whether the applicant is engaged in lobbying, “paid advocacy,” writing editorials or a member of a trade organization.

The application also includes more subjective questions, such as whether the applicant is free of “real or perceived” conflicts of interest, declines involvement in political activities, and resists pressure from lobbyists or interest groups.

The application form states that the Governor’s Office will review several factors such as perceived conflicts of interest or political involvement so that an applicant “maintains journalistic integrity.” 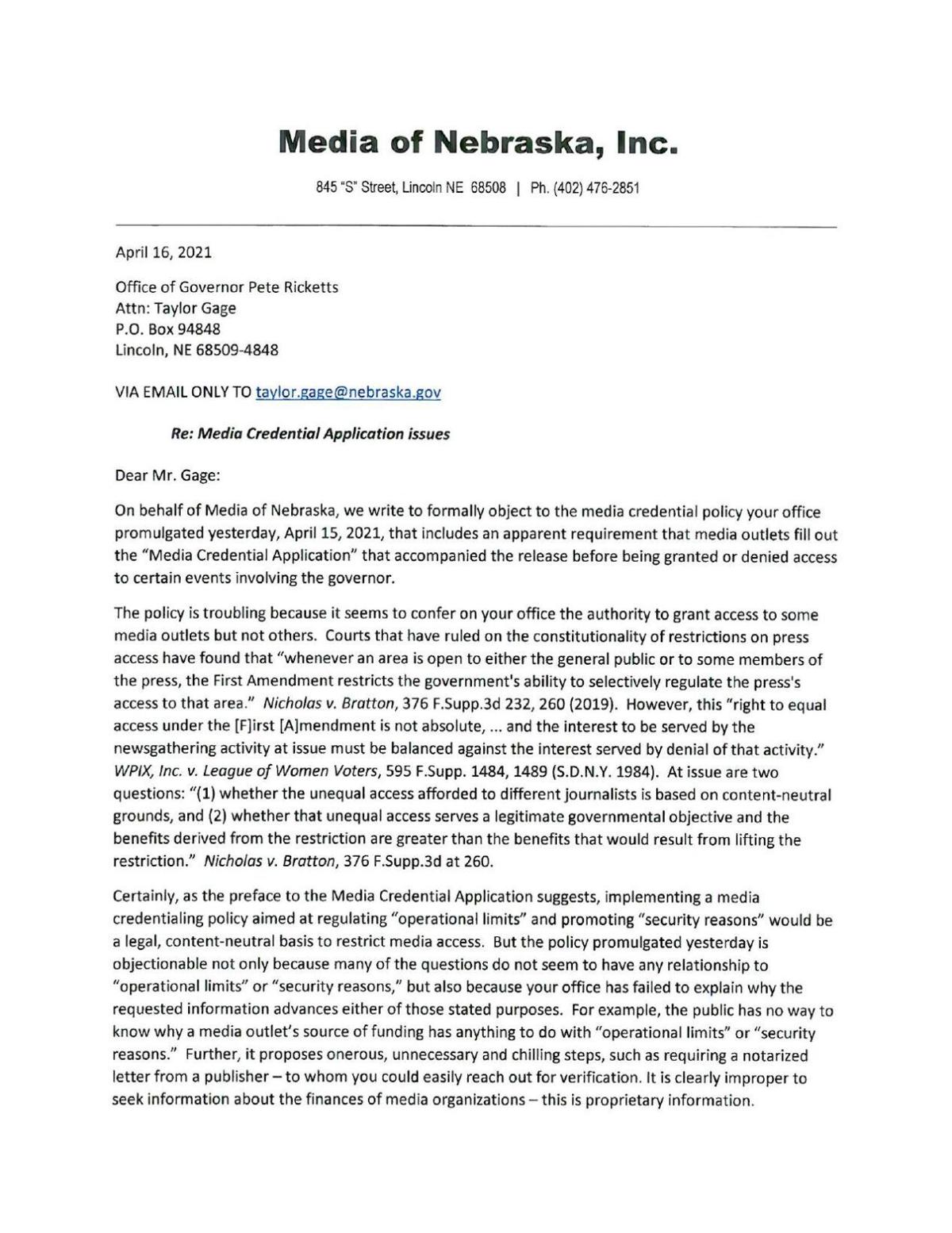 The forecast projects that Nebraska’s pace of job recovery will top the nation as a whole and that growth will be especially strong in the construction, financial services and health care industries.

The Reporters Committee for Freedom of the Press said Ricketts' process for credentialing news organizations may be used as a pretext to exclude media based on their perceived political viewpoint.