Jasmine Gutschow felt nauseous when she woke up a few days before Thanksgiving last year. She brushed it off as typical pregnancy symptoms. She told her fiance he should head into work – the baby wouldn’t be coming anytime soon.

Gutschow sat curled in the passenger seat on the shoulder of Nebraska 10 near Upland, trying not to scream in pain and scare the two other children in the car. There had been no time to find a babysitter.

“I really don’t want to have this baby on the side of the road,” Gutschow said as she told Gregory to call an ambulance.

The bigger problem: The couple lives an hour’s drive from the hospital where Gutschow receives maternity care.

The couple lives in Franklin, in a county of 2,889 residents in south-central Nebraska. Like 55 other counties in the state, Franklin County has no hospital offering birthing services.

The long drive can lead to far worse outcomes than added mileage. Rural regions of the state accounted for roughly 40% of births from 2016 to 2018. During that time, rural Nebraska had a rate of roughly 52 severe maternal mortality cases per 10,000 deliveries, notably higher than the urban rate of 45, says the Nebraska Department of Health and Human Services.

“The help is not there,” Burki said.

When the ambulance arrived, Gutschow struggled to uncurl her body and lay flat on the stretcher. Her fiance and the kids stayed on the side of the highway as the ambulance pulled away. Gutschow was alone with no pain medication.

One EMT called Gutschow’s obstetrician. Another reassured her they had trained for this exact scenario. In fact, the Hildreth first responders had done a Simulation in Motion Nebraska training – a simulated emergency delivery – less than 48 hours before Gutschow’s call.

They sped toward Kearney. But Gutschow’s water broke and it became obvious they wouldn’t make it. Hildreth EMTs hadn’t delivered a baby in 70 years, Burki said.

In small-town Nebraska, a lack of both babies and funding have made deliveries more difficult.

Sixteen counties in Nebraska average fewer than 50 births a year, according to the U.S. government.

If a hospital only sees a handful of births a year, it’s tough for staff to confidently offer obstetric care, said Mariana Tuttle, research fellow at the University of Minnesota’s Rural Health Research Center.

Low birth rates also make funding labor and delivery services difficult, especially in rural regions where half the births are funded by Medicaid – which reimburses at half the rate of private insurers, Tuttle said.

She said it’s a compelling reason to expand Medicaid in states like Nebraska.

“I think there was a reluctance to invest additional dollars beyond what's already being invested,” Howard said.

From groupie to Gorat’s: Omaha waitress reflects on her place in rock n’ roll world

“People deserve to be able to live in these beautiful rural spaces and still have safe and healthy outcomes and labor and birth,” Tuttle said.

The dangers of giving birth in a rural area increase for parents of color, said Christian Minter, the Maternal and Infant Health Manager in Nebraska for March of Dimes. Black and Native infants die at twice the rate of white infants.

“Many Native American moms do live in some of these rural counties, and so looking at their access to health care is important as well,” Minter said.

Maintaining a birthing unit might simply not be possible in some of Nebraska’s smallest counties. Arthur County, for example, averaged only 11 births a year from 2017 to 2019.

Where it might not be feasible to keep a delivery unit open, family medicine physicians can increase prenatal care access at clinics and help transfer their patients to larger hospitals when the time comes, Tuttle said.

But it’s not just delivery hospitals disappearing in rural Nebraska.

The state has lost 56 family medicine physicians in the past five years.

Ninety-one of the state’s counties – every county except Douglas and Lancaster – are now designated as a “shortage area” for at least one type of primary care doctor. Fourteen rural Nebraska counties lack both a family medicine physician and obstetrician, according to a 2022 report by the University of Nebraska Medical Center’s Rural Health Initiatives.

Without intervention, it will get worse. In the coming decade, a large portion of rural Nebraska’s doctors of all types are expected to retire, said Nicole Carritt, director of UNMC’s Rural Health Initiatives.

Recruiting certified nurse midwives is one cost-effective way of improving pregnancy care in rural areas where recruiting doctors may prove impossible, Minter said. And the number of those midwives is growing slightly in Nebraska even as the number of small-town doctors plummets.

But Nebraska is one of only three states where certified nurse midwives have to practice under the supervision of a licensed physician, according to the American College of Nurse Midwives.

That regulation presents a challenge for certified nurse midwives trying to practice in small Nebraska towns that don’t have a doctor, Minter said.

So hour-long drives, like the one from Franklin to Kearney, remain the norm in small-town Nebraska. They make stories like Gutschow’s wild ambulance ride more likely.

On that morning a few days before Thanksgiving, the ambulance made it only 10 miles before she gave birth to her son, Raiden.

The ambulance now carrying mother, newborn and relieved Hildreth EMTs stopped at the nearest hospital in Minden. But that hospital didn’t have the necessary equipment to care for Gutschow’s brand-new son.

Hours into his life, Raiden was put into another ambulance so he could finally get to Kearney.

“Normally right after you have birth at the hospital, the baby's right there with you in the room and you start that bonding time,” Gutschow said. “We didn't get that until at least four hours afterwards, and I barely got to see him since he was so premature.”

Raiden’s father missed the entirety of the birth. Instead of her fiancee holding her hand, an EMT – a complete stranger – squeezed Gutschow’s hand through delivery.

Today, Burki regularly receives photo updates of Raiden, who is mastering his crawl alongside his brother. He has already made multiple visits to the EMTs who delivered him.

“We all became aunts and uncles,” Burki said.

The now 9-month-old Raiden owns a one-of-a-kind birth certificate, which lists his place of birth as “Mile Marker 32.”

Delivering Raiden is one of Burki’s best memories as an EMT. She also never wants her ambulance to become a delivery room again.

“Not every outcome is gonna be smooth as that one was,” Burki said. “What happened that day is probably more likely to happen again with how things in rural America, not just in Nebraska, are going.”

Man whose body was found in northern Douglas County is identified

The Douglas County Sheriff's Office has identified a man who was found dead on the side of the road Sunday morning.

Wilcox community raises over $200,000 for family of man who died in farm accident

About two dozen of the swine could be seen frolicking in the ditch southeast of the roundabout, with the majority still inside the trailer.

As much of the U.S. experiences what might be “its hottest summer ever,” the Farmers’ Almanac is predicting another extreme season — winter.

The driver of a semitrailer truck was killed when the semi he was driving collided with a freight train west of Juniata.

"We lost everything but we are all OK, which is what matters,” said Chris Wize.

The southwestern corner of the state is now experiencing exceptional drought, the most severe category. It's the first time since 2013 that category of drought has shown up in Nebraska.

Many residents have shown they are willing to work for free by showing up to voluntarily unpack shipments of dry and canned goods and stock the shelves. 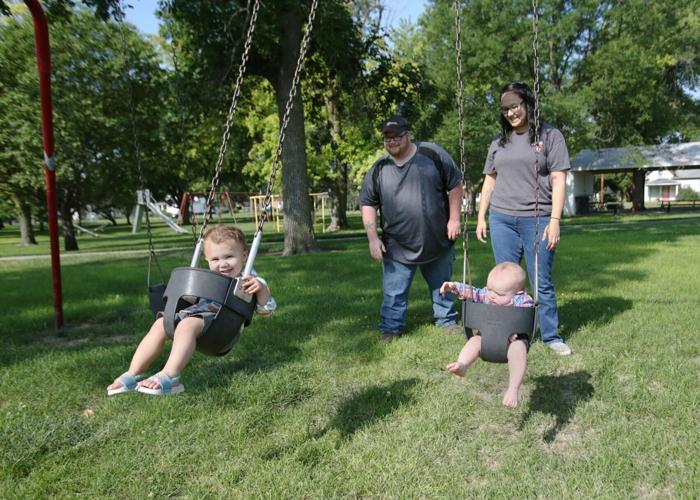 Kevin Gregory and Jasmine Gutschow play with their children Jasper (left) and Raiden at the city park in Franklin. The couple lives in Franklin County, one of 56 Nebraska counties that don’t have a hospital offering birthing services. 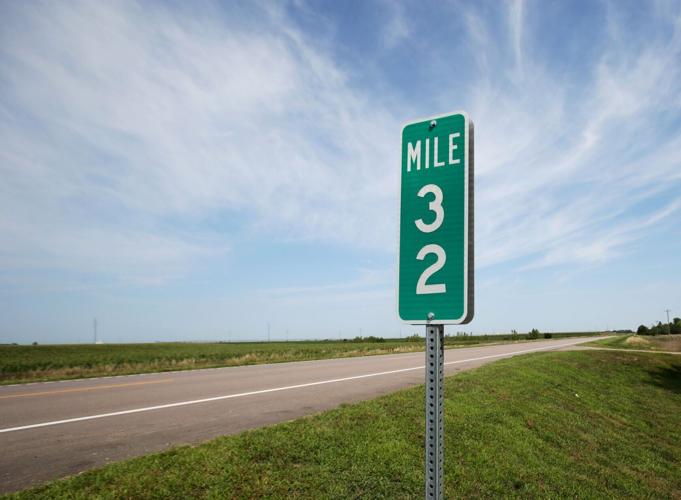 Mile marker 32 on Nebraska 10 is listed as the place of birth on Raiden Gregory’s birth certificate. 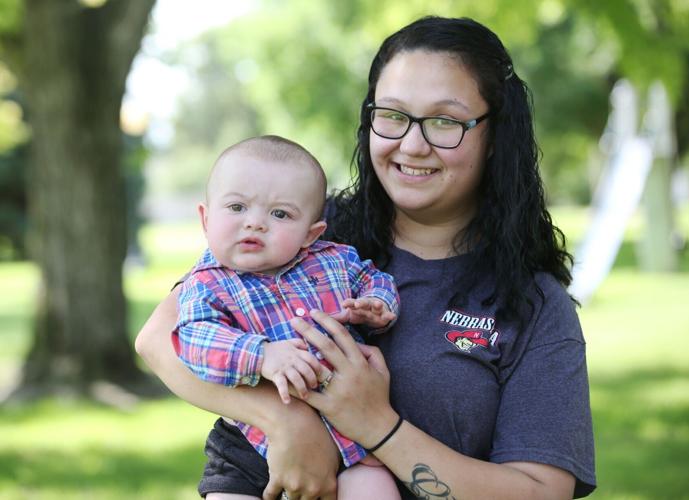 Jasmine Gutschow gave birth to her son Raiden on Nov. 15 in an ambulance speeding toward Kearney.