Ever since Rep. Alexandria Ocasio-Cortez, D-N.Y., introduced it last February, the Green New Deal has sparked a rancorous political debate about what exactly should be done to combat ever-worsening climate change.

But outside of Washington, few know much about it.

In a nationwide public opinion poll by The Washington Post and the Kaiser Family Foundation (KFF) this past summer, more than 3 in 4 Americans had heard little or nothing about the Green New Deal. While overall opinion was split, opposition rose among those most familiar with the plan.

Of those who said they had heard at least "a good amount" about the Green New Deal, nearly 6 in 10 opposed it. Among all adults, 20 percent supported it, while 20 percent were opposed and the rest said they did not know enough to have an opinion.

Republicans were about twice as likely as Democrats to have heard a good amount about the plan, which has drawn outsized rhetorical attention from President Donald Trump and GOP lawmakers.

Larry Tucker, a 70-year-old Trump voter and conservative Christian from northeastern North Carolina, said he learned of the Green New Deal from the president. "The first I heard about it was Trump blasting it after several Democratic candidates embraced it."

Tucker opposes the Green New Deal, but not because he dismisses the link between human activities and climate change. As a banker, he even helped finance solar energy projects.

The survey showed that while Americans like many of the plan's goals, they are less keen on increasing federal spending by trillions of dollars to achieve its vision of tackling climate change and economic inequality through a series of government programs.

The goals of the Green New Deal, which has energized the Democratic Party's young activists, are many and massive: To provide all Americans with high-quality healthcare, to guarantee them jobs with good wages and to meet 100 percent of their power demands through clean energy.

Mary Anne Casserly, a 64-year-old retired home economics teacher in Middleborough, Massachusetts, thinks the government is doing too little to reduce greenhouse gas emissions and is concerned about what sort of planet her generation is leaving the next. But while she described herself as a Democratic-leaning independent who "has no use for the current administration," she is worried about the Green New Deal's trillion-dollar price tag.

"There must be ways to do it so that the middle-class, hardworking taxpayer doesn't incur the costs," Casserly said, adding that she would be willing to face a small tax increase but hopes most of the tax burden would fall on big corporations that benefited from the GOP tax cuts.

Two thirds of the Democratic presidential field, including former vice president Joe Biden and Sens. Elizabeth Warren, D-Mass., and Bernie Sanders of Vermont, has embraced the idea of a Green New Deal. Scientists increasingly warn drastic action is the only way to avoid catastrophic climate impacts.

The poll found that just under half of American adults - 46 percent - said the United States needs to "drastically reduce" fossil fuel use in the next few years to avoid the worst effects of climate change, while 41 percent said a gradual reduction in fossil fuel usage is needed and another 12 percent said nothing needs to be done to avoid the most severe impacts.

By more than 2 to 1, Democrats believe a drastic, rather than gradual, reduction in emissions is necessary (66 percent vs. 31 percent), while Republicans are more likely to call for either a gradual reduction (51 percent) or no reduction at all (29 percent).

Like many people her age, 23-year-old Emily Gravel-Fletcher said "climate change is the biggest issue, honestly, we've ever faced as humankind." The Boise, Idaho, resident learned about the topic not only from her coursework at Boise State University, where she is pursuing a master's in health science, but also by seeing floods, droughts and wildfires hit Idaho as she grew up there.

Gravel-Fletcher, a Democratic-leaning independent, said she has followed Ocasio-Cortez's work and "somewhat supports" the Green New Deal. But she knows the plan would be a tough sell for her conservative neighbors.

"I would say that that's my hesitation," she said. "I just know locally it wouldn't necessarily be supported as well."

Days after being elected to Congress, Ocasio-Cortez joined activists from the Sunrise Movement to occupy the office of soon-to-be-House Speaker Nancy Pelosi, D-Calif., to demand the next Congress take on climate legislation.

Ocasio-Cortez, along with Sen. Edward Markey, D-Mass., fleshed out their ideas in a non-binding Green New Deal resolution put out in February and co-sponsored by Warren, Sanders and several other White House hopefuls.

But many Republicans quickly panned the plan as costly and unrealistic. And at a conference of conservative activists in March, President Trump mocked what he called the "New Green Deal," sarcastically encouraging Democrats to support it. Later that month, Senate Majority Leader Mitch McConnell, R-Ky., rallied the GOP-controlled chamber to vote it down.

Yet the Post-KFF poll shows that most of the Green New Deal's goals are broadly popular.

The guarantee of jobs with good wages for all workers is the single most popular goal, with 78 percent of Americans saying they would support the Green New Deal if it would accomplish that and only 20 percent saying they would oppose it.

The second-most popular goal is upgrading all buildings to be more energy efficient (70 percent in favor and 27 percent opposed), followed by achieving zero-emission energy sources within 10 years (69 percent to 28 percent)

Providing all people with health care through a new government program also won wide approval, by a more than 2-to-1 margin, but there was a significant disparity between the parties. Republicans and Democrats also diverged widely on whether to back major new business regulations and a reduction in the number of U.S. coal-mining jobs.

Ocasio-Cortez's Green New Deal resolution did not come with any official price tag, but the congressman has said it would cost $10 trillion over several years. President Trump and other conservative lawmakers from saying it could be as high as $100 trillion, an estimate based on a tweet by a Manhattan Institute scholar.

Presidential candidates attach much lower costs for their climate plans, though they still indeed reach into the trillions of dollars over the next decade. Biden put the cost of his climate plan at $1.7 trillion. Warren's proposal to invest in clean energy programs as part of a Green New Deal would cost $2 trillion. And Sanders wants to spend $16.3 trillion to enact his version of the Green New Deal.

The Washington Post's Emily Guskin contributed to this report. 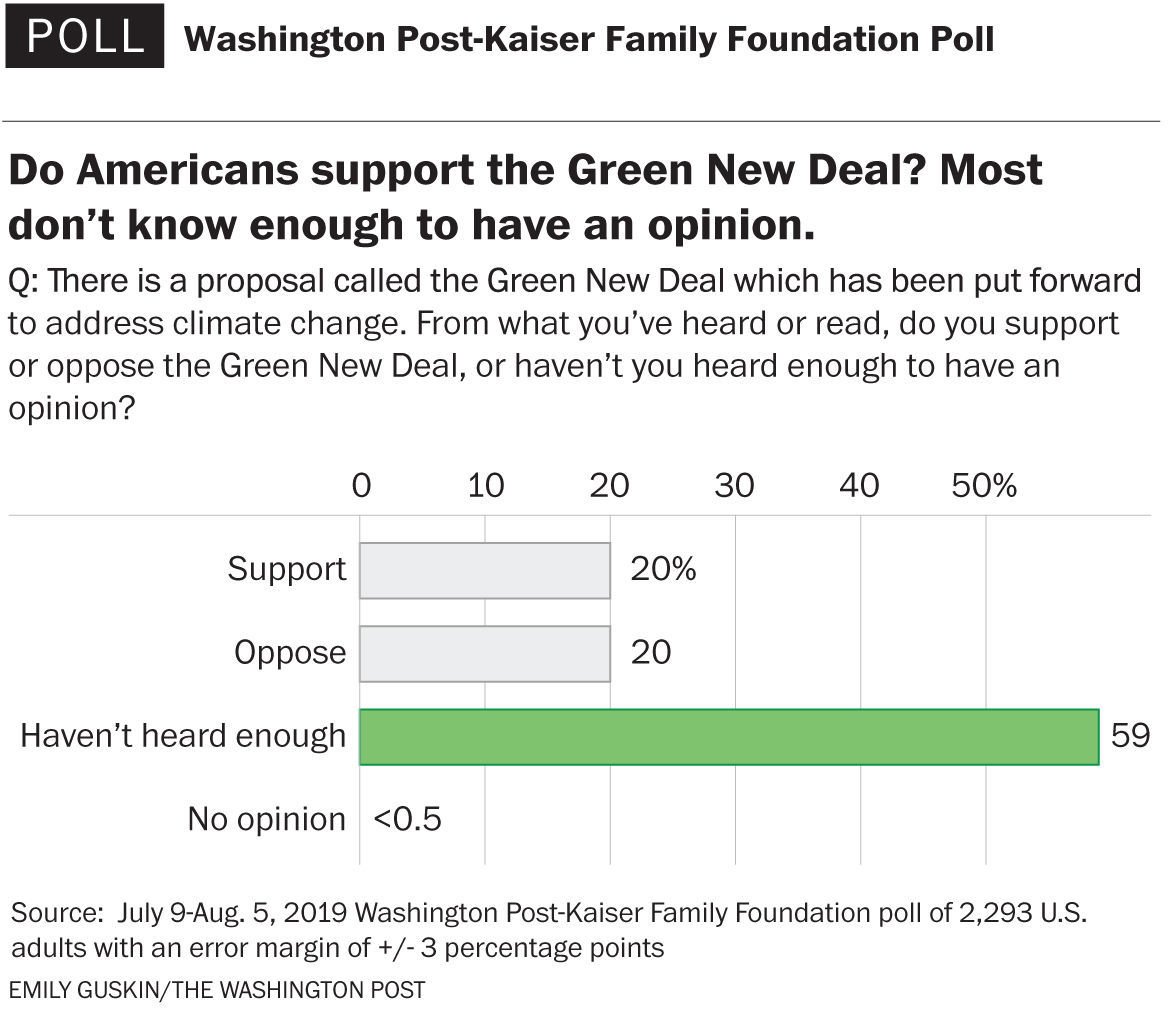 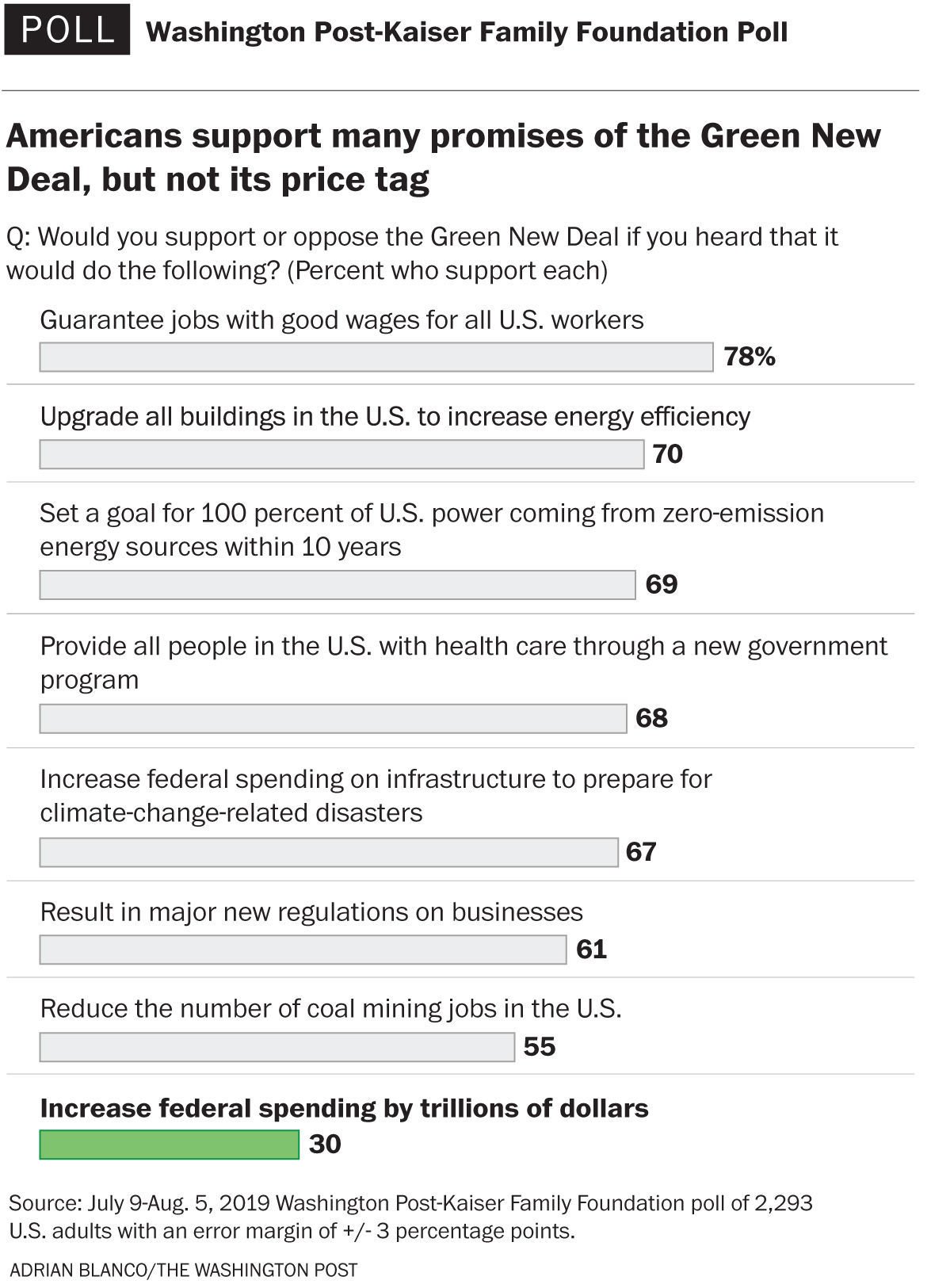