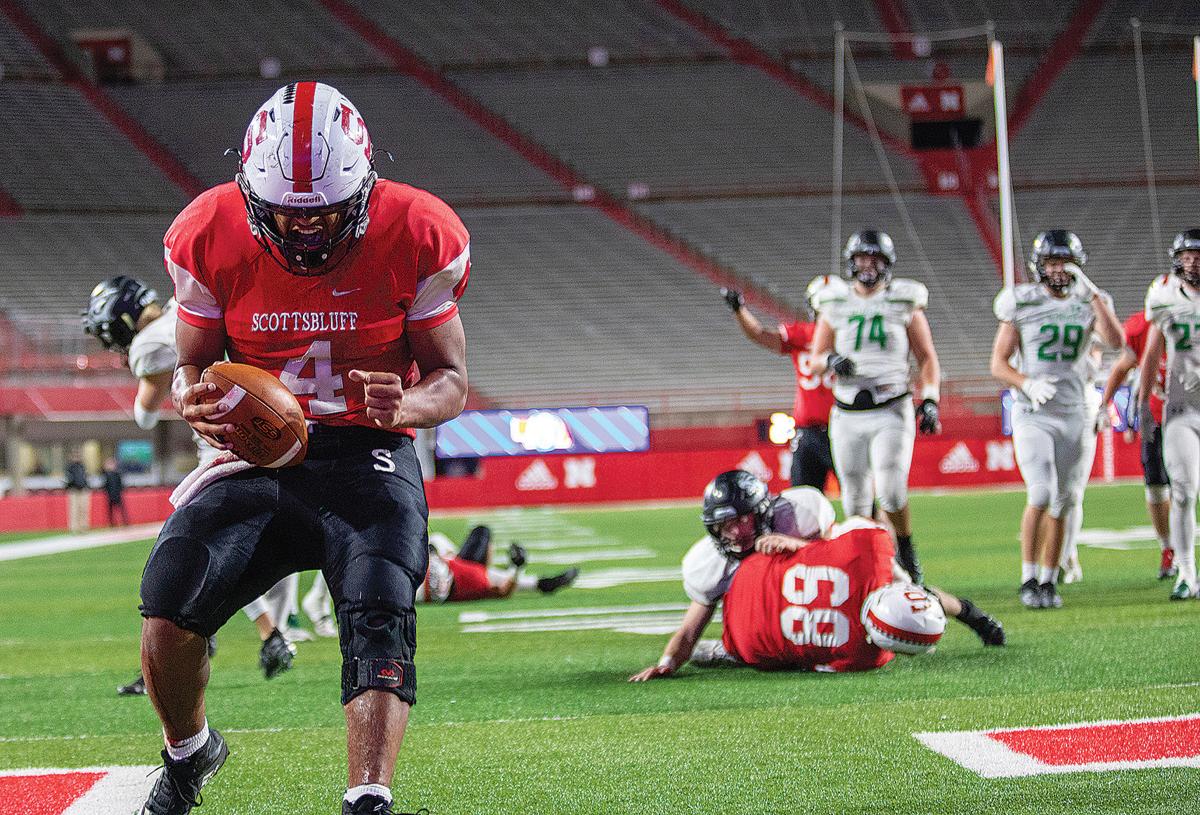 Scottsbluff’s Sabastian Harsh reacts after scoring a fourth-quarter touchdown against Omaha Skutt in the Class B championship game on Monday, Nov. 25 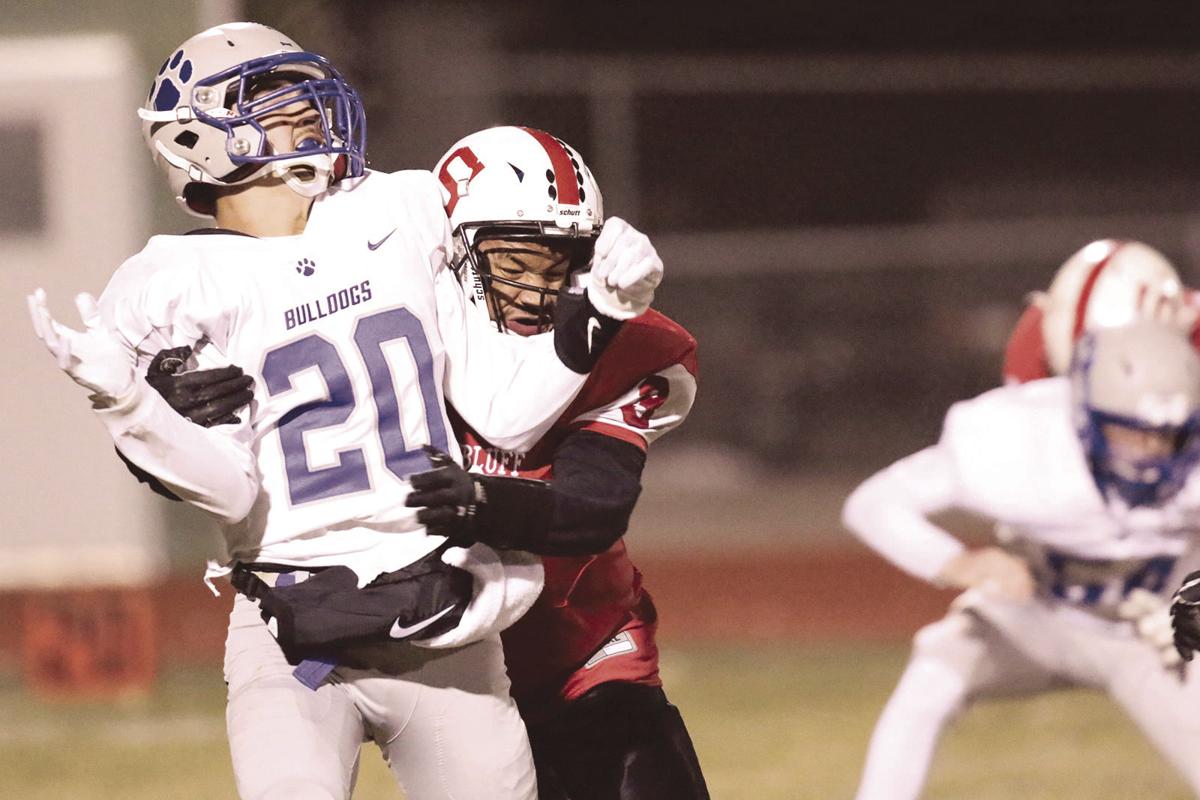 Scottsbluff’s Jasiyah DeOllos puts the hit on Alliance quarterback Trevor DuBray during their first round game in the Class B playoffs at Bearcat Stadium on Friday, Nov. 1. 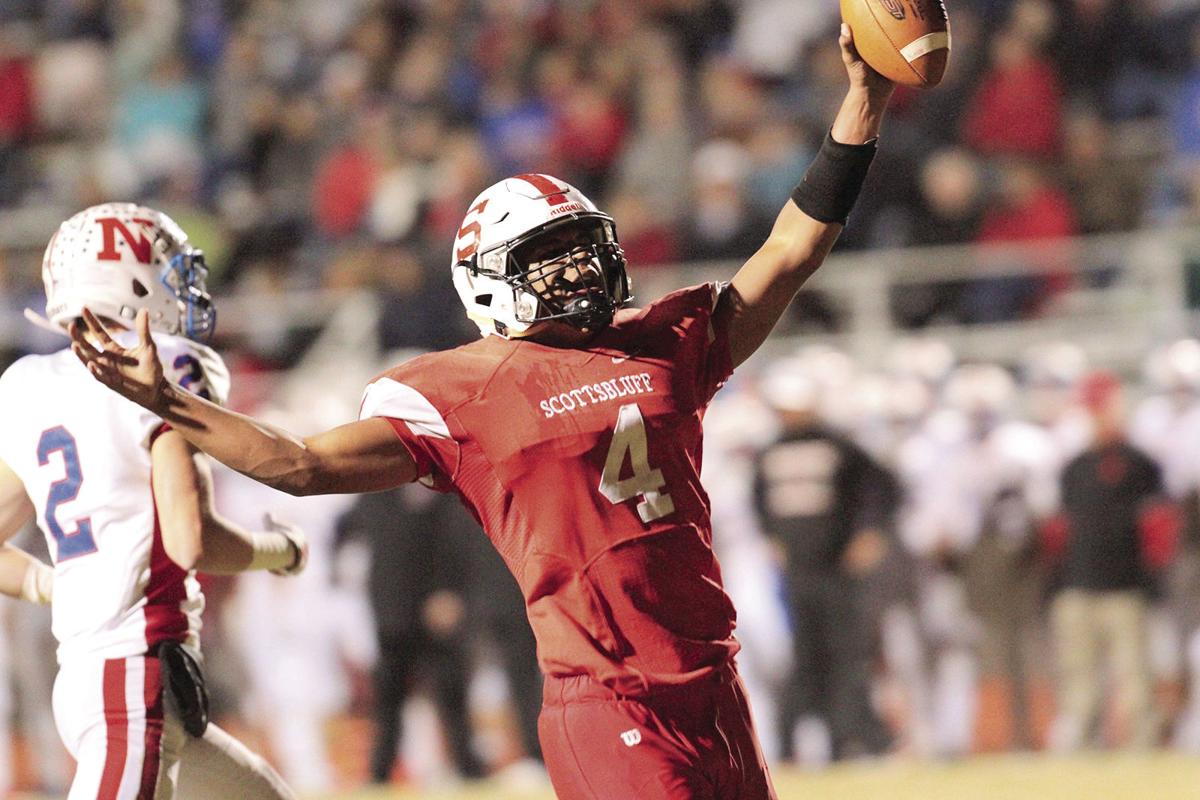 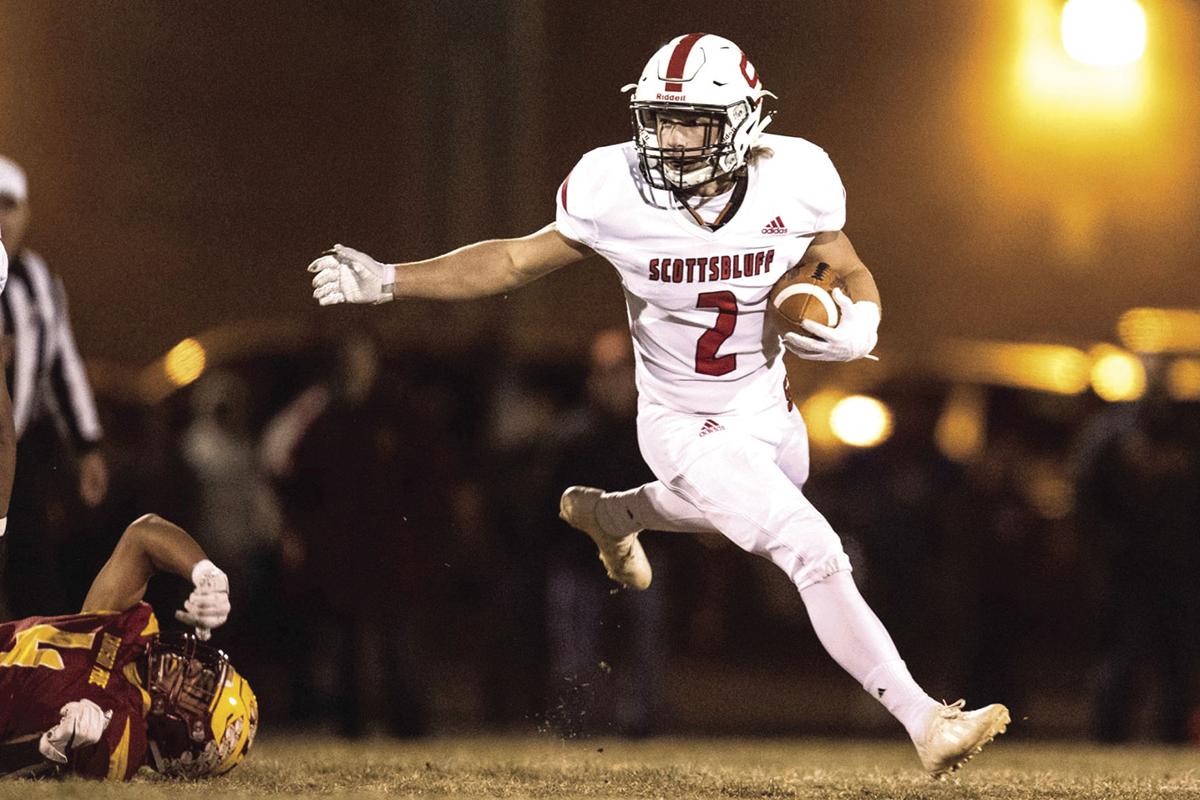 Scottsbluff’s Caleb Walker looks for yardage after breaking a tackle from Omaha Roncalli’s T.J. Hamilton at Roncalli for a Class B semifinal state football game on Friday, Nov. 15. 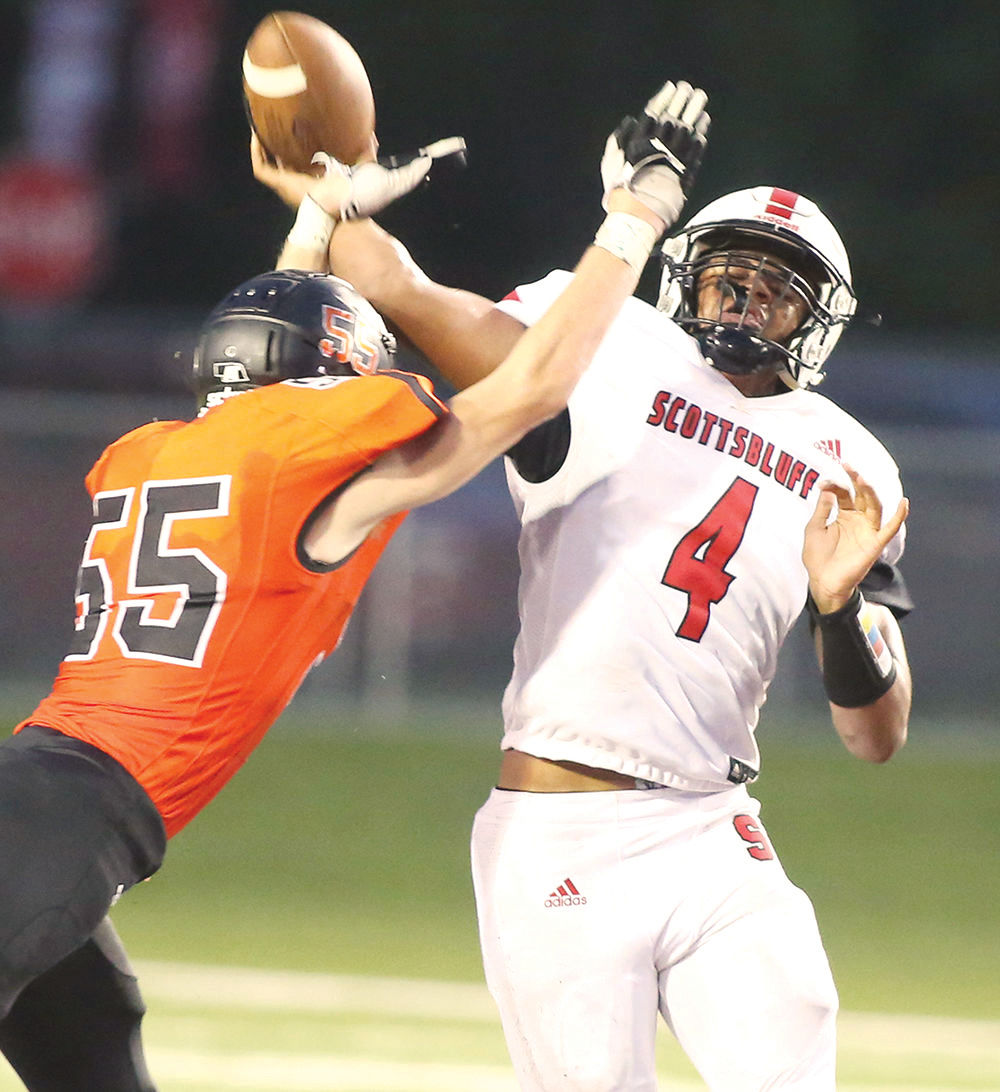 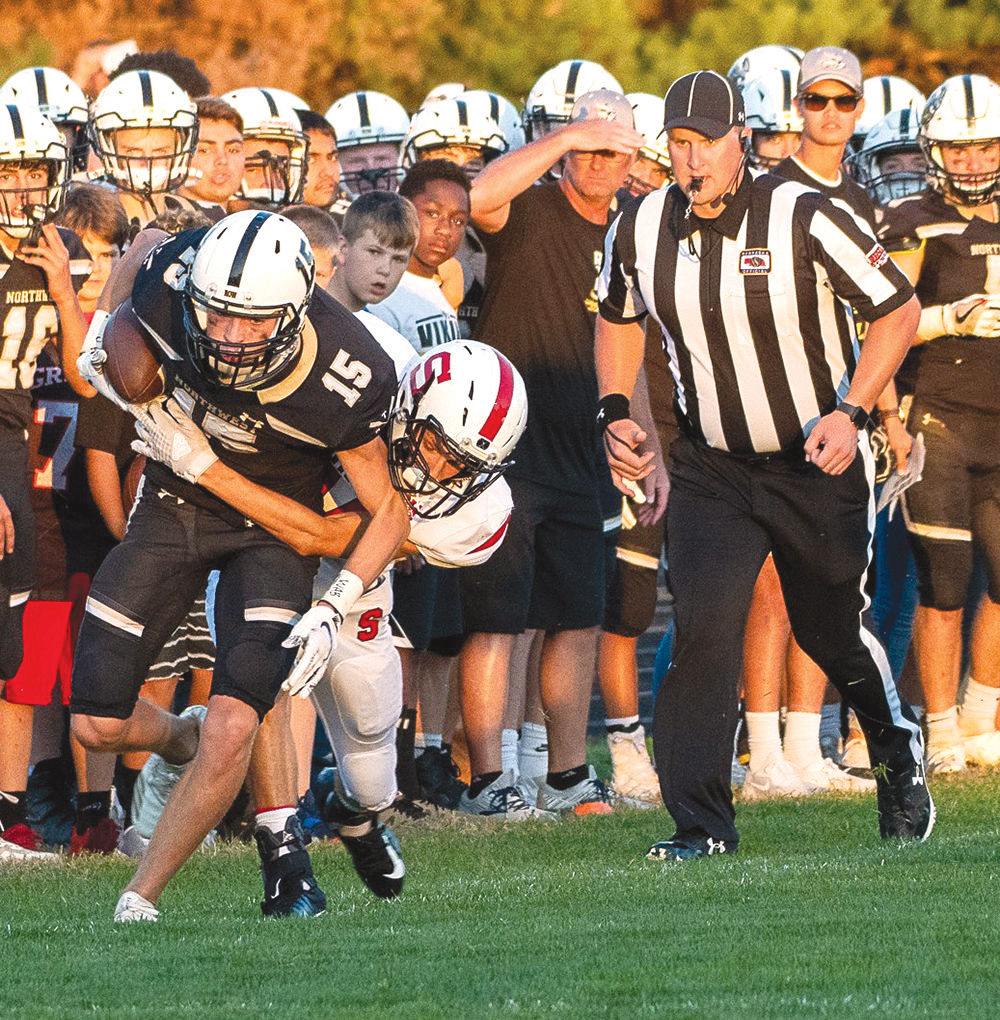 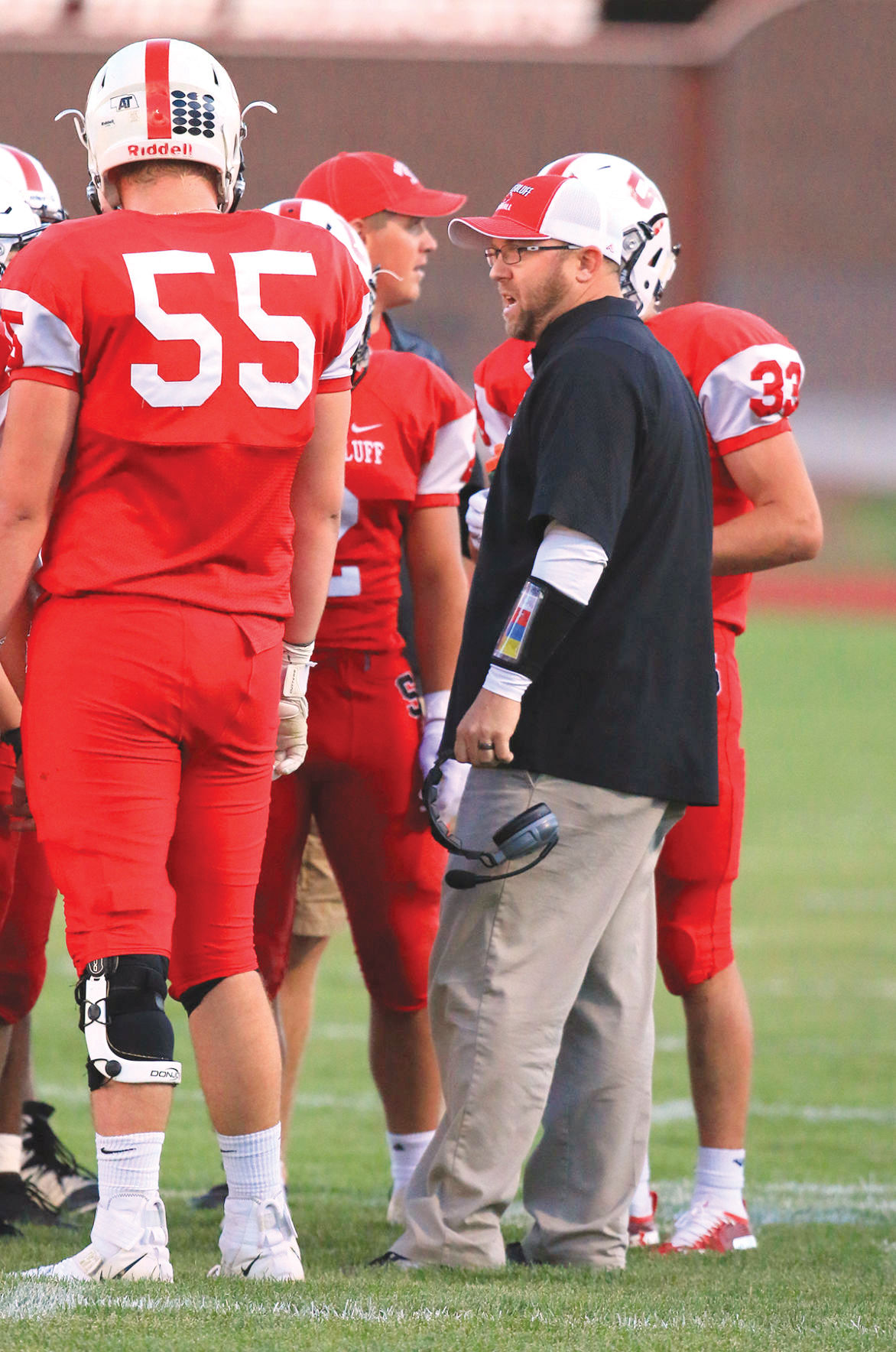 Scottsbluff head coach Jud Hall talks to his team during their game against Sterling, Colorado on Sept. 20. 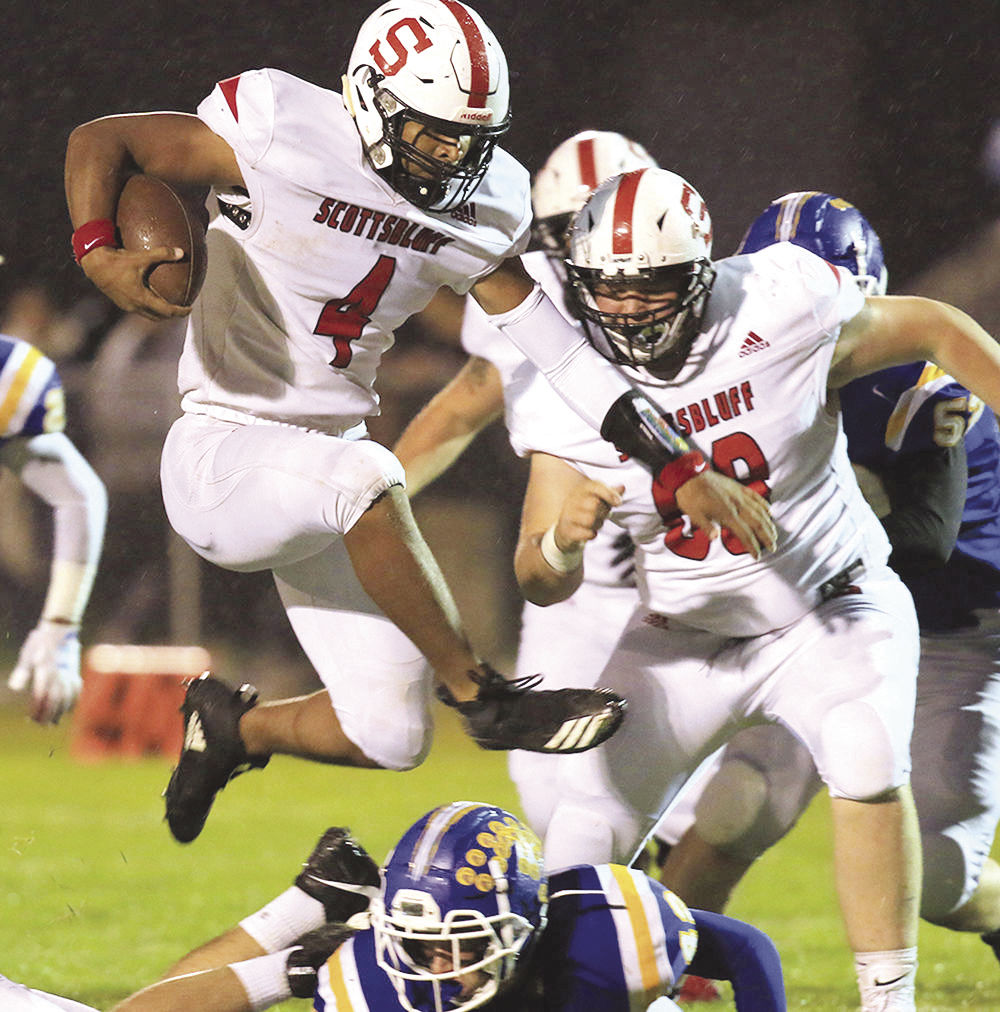 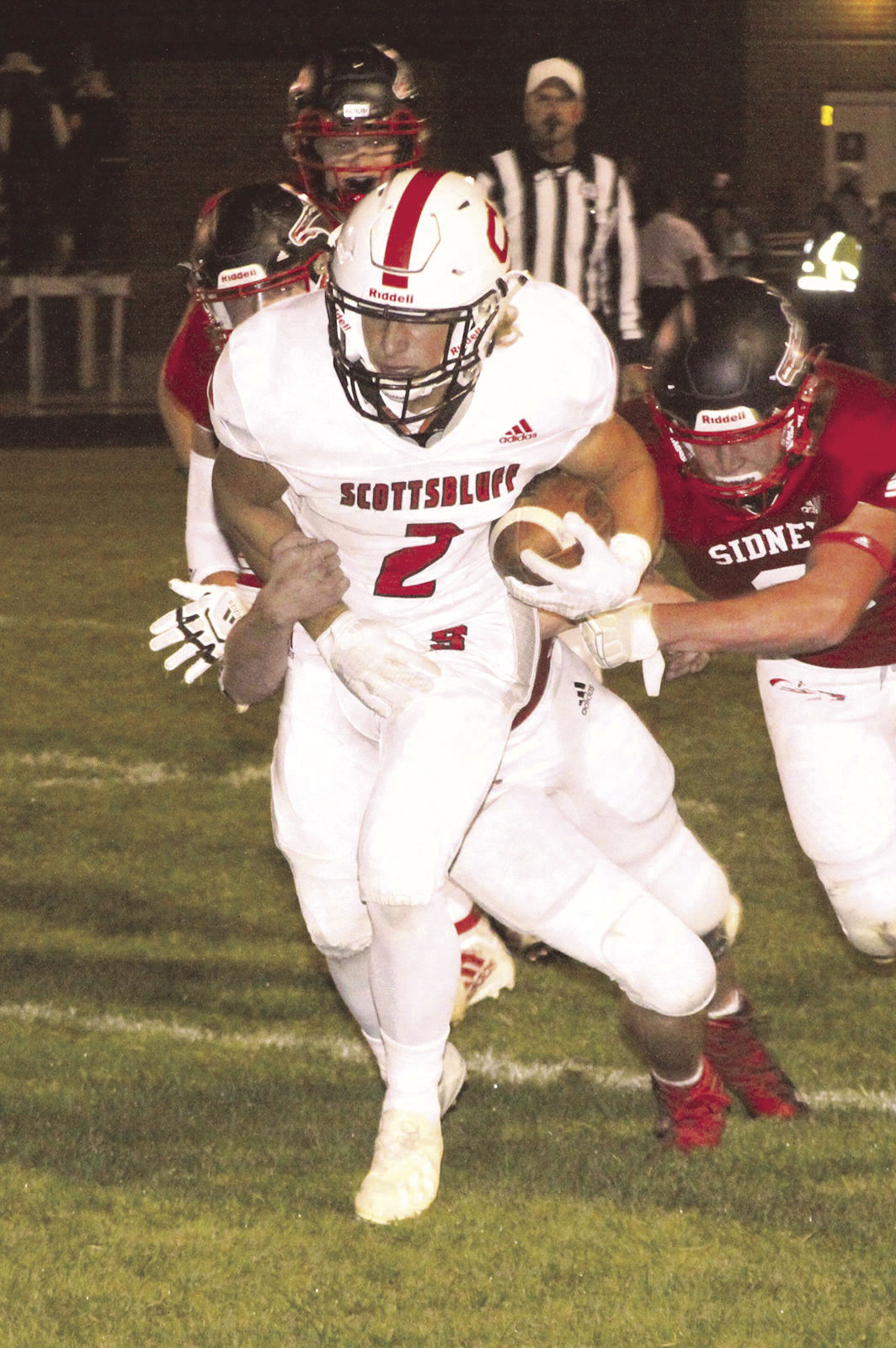 Scottsbluff’s Caleb Walker runs the ball during a football game on Friday, Oct. 4 in Sidney. 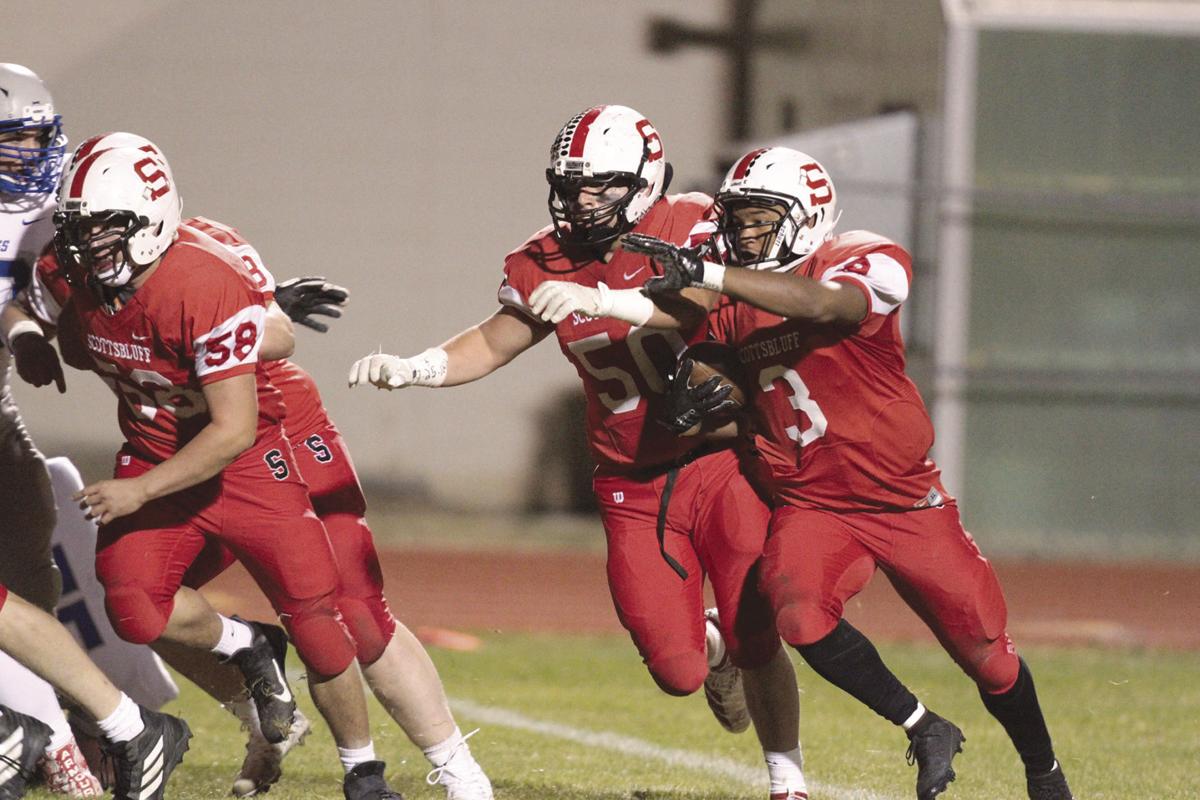 Scottsbluff’s Jasiya DeOllos takes the ball upfield with Terrance Mokeac blocking for him during their game against Alliance on Friday, Oct. 18. 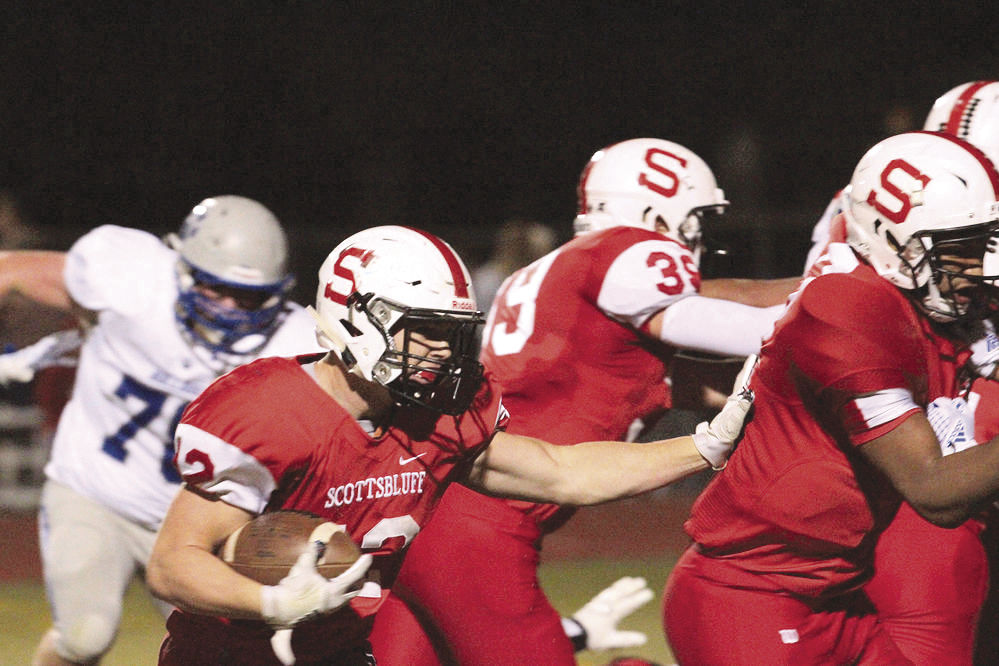 Scottsbluff’s Jacob Krul looks for a hole in the Alliance defense earlier in the season. No photo was available from this game. Scottsbluff downed McCook 21-14 on Friday, Oct. 25. 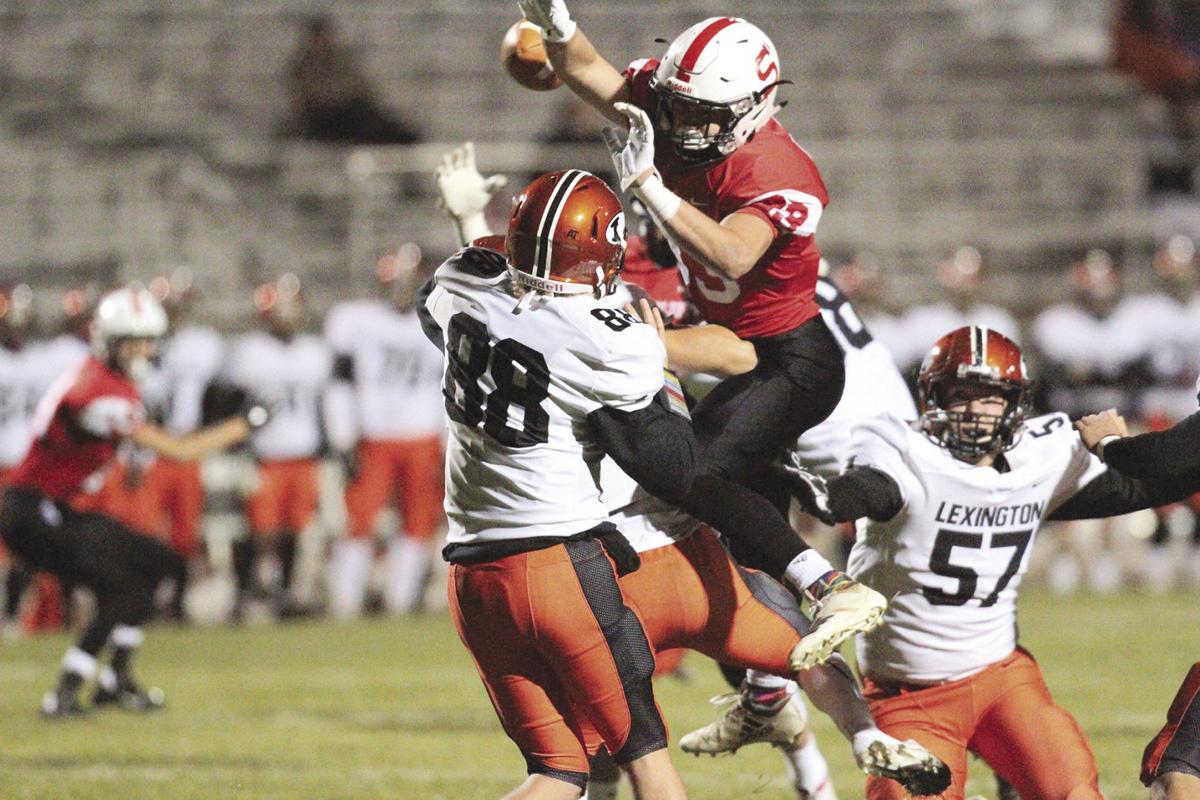 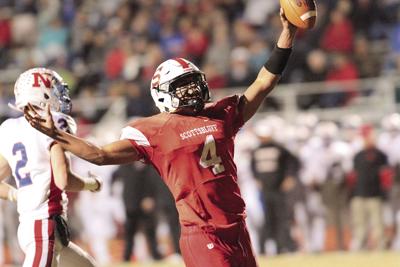 The Scottsbluff Bearcats football team gave us plenty of highlights throughout the season. Below is a game-by-game recap of the Bearcats outstanding season.

Following two lightning delays that totaled over two hours, the Bearcats outscored visiting North Platte 21-0 in the second half to pull away for a 42-21 victory on Friday night at Bearcat Stadium.

In what many anticipated would be a tight matchup between two state-rated Class B high school football teams ended up being a one-sided affair in favor of the second-ranked Scottsbluff Bearcats.
After spotting ninth-ranked Hastings a 6-0 lead early in the first quarter, Scottsbluff reeled off the next 35 points in a row en route to recording a dominating 41-12 road victory.

Facing real adversity for the first time this season, the Scottsbluff High School football team didn’t flinch in a Class B state-rated showdown with Grand Island Northwest.
The Bearcats overcame a fourth-quarter deficit to escape with an 18-13 win over the seventh-ranked Vikings.

Sabastian Harsh finished with 140 yards on the ground and 150 through the air with four touchdowns to lead the Class B No. 2 (Omaha World-Herald) Scottsbluff football team to a 36-13 win over Sterling, Colorado.
Krul also passed the century mark in rushing, toting the ball 17 times for 124 yards rushing.

Jacob Krul rushed for 2    yards and the Class B No. 2 (Omaha World-Herald) Scottsbluff football team racked up 432 yards on the ground in a 42-7 win over Gering on Friday night at Memorial Stadium in Gering.
The win improved the Bearcats to 5-0.

What once was a major district showdown on the gridiron just a few short years ago has recently turned into a major mismatch between the Scottsbluff and Sidney football teams.
That trend continued between the now interclass foes as the Class B Bearcats cruised to a 59-0 win over the Class C-1 Red Raiders.

SCOTTSBLUFF — The Scottsbluff Bearcats dominated on all sides of the ball in their 64-14 win over Lextington Friday night at Bearcat Stadium.
Scottsbluff forced a Lexington fumble on the opening kickoff and didn’t look back.

The Scottsbluff football team took a little bit to find it’s offensive rhythm, but once it did there was no stopping it. Scottsbluff downed Alliance 51-10.
Bearcat running back Jacob Krul scored four times in the first half. Krul closed out the scoring in the first half on a dazzling run on a short pass play and took it 78 yards for a touchdown.

For the second straight year, the Scottsbluff football team will head into the postseason with an undefeated record as Class B, District 4 champions.
The Bearcats, who have been running roughshod over the competition the past few weeks, were put to the test in their regular-season finale on Friday night in McCook by an inspired Bison team playing its best football of the season.

Bearcats advance to second round of Class B playoffs

For the second straight year, the Scottsbluff football team will head into the The No. 1-seeded Scottsbluff Bearcats dominated Alliance 48-6 in the first round of the Class B playoffs.
Scottsbluff quarterback Brett Hill, who was starting in the place of Sebastian Harsh, accounted for the Bearcats first three touchdowns.

The Scottsbluff Bearcats bashed the Norris Titans defense winning 49-28 behind five touchdowns by Sabastian Harsh.
Scottsbluff’s Jasiya DeOllos and Caleb Walker also scored for the Bearcats.
The Bearcats began to ran away with the game in the second quarter. Harsh scored before the end of the first quarter. He added two more in the second to give the Bearcats the 21-7 lead at halftime.

Sabastian Harsh accounted for 613 yards and eight touchdowns to lead the Scottsbluff football team to a 63-56 win over Omaha Roncalli Catholic, earning a berth in the Class B state title game for the second year in a row.