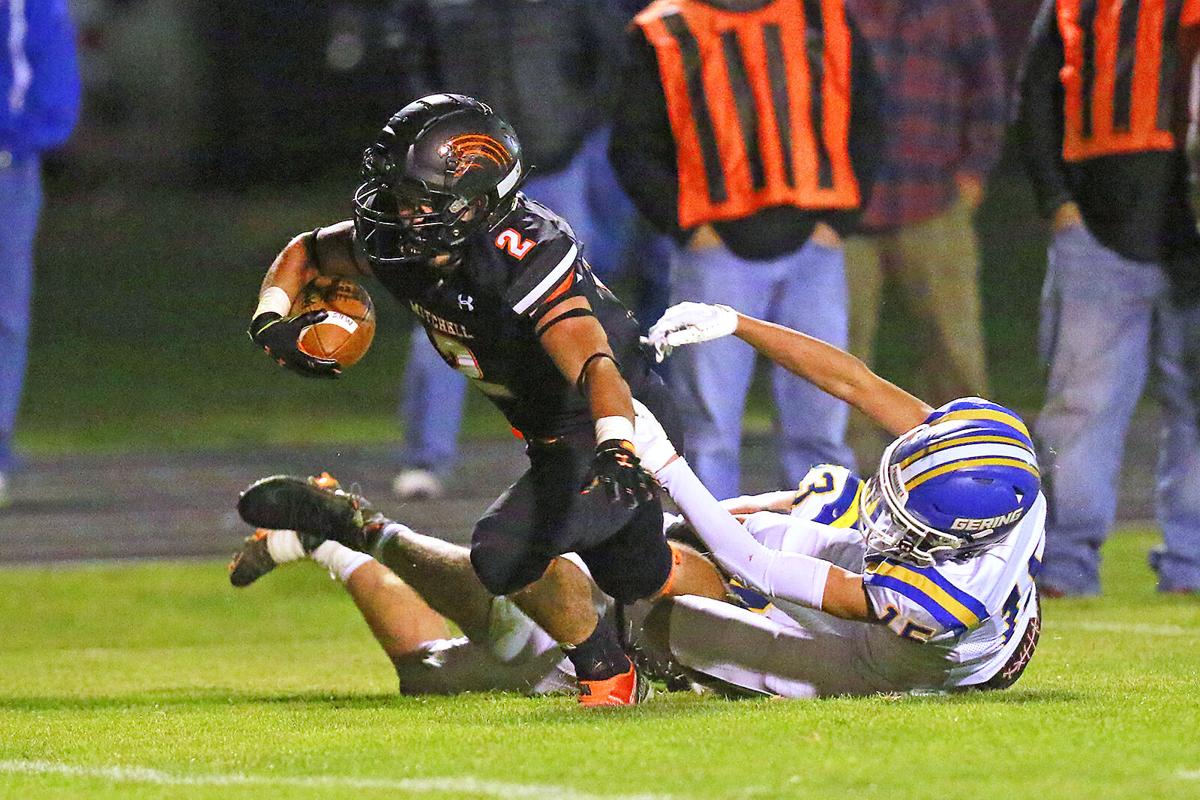 Mitchell's Rylan Aguallo spins out of the grasp of Gering's Tyler Garrett during their game on Friday, Oct. 16 in Mitchell. 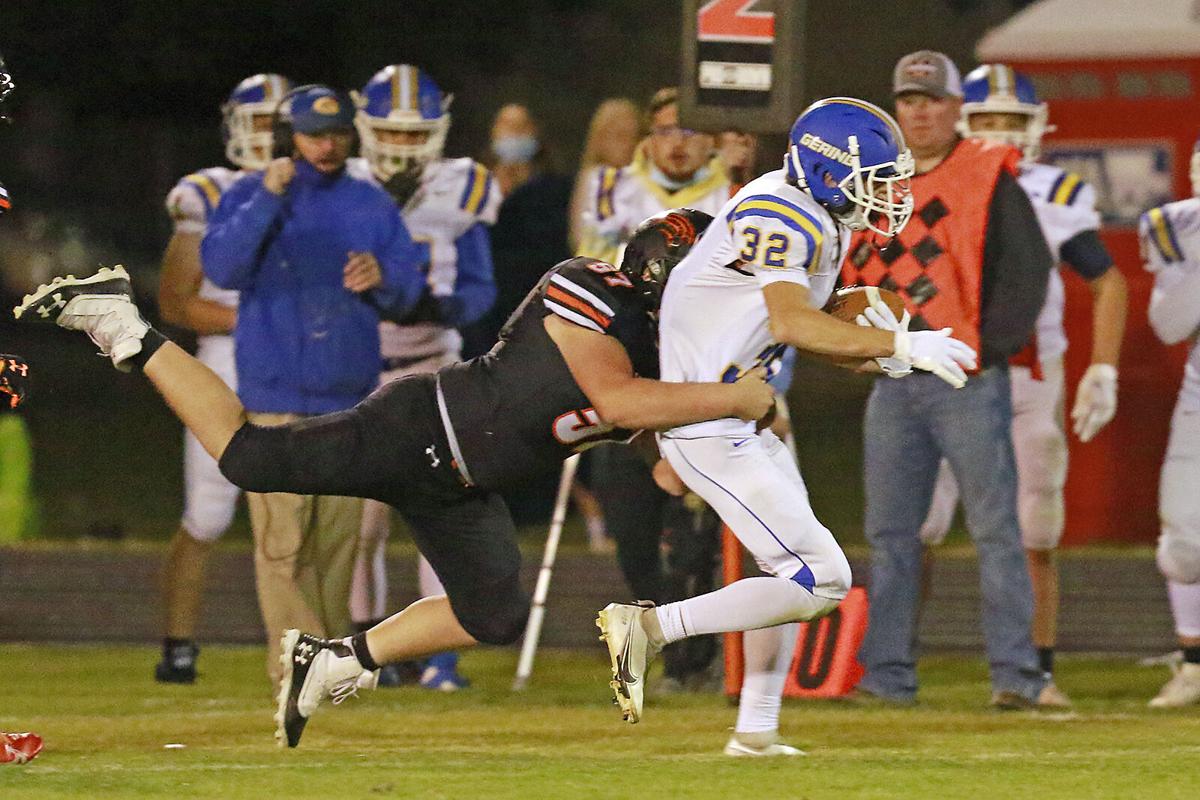 Gering's Lance Isaacs makes the catch while being ran out of bounds by Mitchell's Luke Hessler during their game on Friday, Oct. 16 in Mitchell.

MITCHELL — The Mitchell Tigers flexed their muscle with their running game with a 41-6 win over Gering.

Mitchell’s Rylan Aguallo accounted for five of the Tigers touchdowns, including the first score of the game in the first quarter.

Aguallo wasn’t Mitchell’s only running threat in the game.

“Our focus has always been on the running game, and that’s our strength,” Aguallo said. “It was definitely a point to come here at home and reevaluate (after the loss to Gothenburg) to ensure that we were dominant on offense in the running game. We had multiple options running the ball. It wasn’t just me and Austin (Thyne).”

Mitchell ran the ball up the middle often with success, but a lot of their damage came bouncing the ball outside.

“It gave us a little bit of a look to see if we could hit the outside or not,” Aguallo said. “If we hit the inside, great. The best yardage is straight up and down the field. If (the inside isn’t there) we soften up the outside.”

Thyne said they were just taking what the defense gave them.

“We practice running up the middle a lot. We have a good line, so we thought we could do it. Then they blitzed a little bit, and we got away from that. I think we did good starting off with that,” he said. “We always run sweep or counter. Our guards pull really well. We got speed on the outside, so that helps a lot.”

He said Aguallo really takes advantage of having a great offensive line.

“It’s just a good combo. Our line does a great job getting him to the outside, and he’s gone because he’s just so fast,” Thyne said.

Aguallo struck again with 7:40 left in the second quarter to give the Tigers the 21-6 lead.

A lot of Aguallo’s yardage on the night came when after he appeared to be wrapped up by Gering’s defense, but Aguallo fought for more yardage.

“Yards after contact, that’s a big one. Keep my feet churning and good things will happen. Kudos to my linemen, because most of the times I was getting wrapped up was in the secondary.”

On their next possession, Mitchell’s drive stalled and they missed on a field goal to end the first half.

After Mitchell held Gering’s offense to a three-and-out, Thyne setup another Aguallo score with a 29-yard run to the 8-yard line. Aguallo punched it in from there giving the Tigers the 35-6 lead with 2:53 left in the third.

The Tigers weren’t quite done with the third quarter, recovering a Gering fumble with 30.2 seconds left. Aguallo sprinted 35-yards to the end zone for his fifth touchdown of the game. After Thyne connected on the PAT, Mitchell led 41-6 with 19.8 left in the third.

Gering’s defense did get Mitchell to cough up the ball in the fourth quarter. The Bulldogs’ Trey Zwickl came up with the ball. Gering was moving the ball well, when Cael Peters picked off a Bulldogs pass with 2:14 left. Mitchell ran out the clock to seal the 41-6 win.

Aguallo said his team has responded well after falling to Gothenburg earlier in the season.

“That definitely put a fire under us because no one likes to get a 28-6 (loss) put up on the board,” he said. “We needed to come back and we did that.”

Thyne said the Tigers learned a lot about themselves after that loss.

“Everyone told us we were so good, but we got to compete day in and day out and just get better,” he said. “We got a little overconfident and we got humbled. I think it was good for us. We’re coming back from it. We’re 3-0 after that.”

Mitchell is back in action on Friday, Oct. 23 when they take on Sidney at home. Gering will be back in action against cross-river rivals Scottsbluff.

The 1970 Huskers didn't just have one great QB. They had two

Nebraska's 1970 national championship team was fortunate to have two great quarterbacks in Jerry Tagge and Van Brownson. “Bob Devaney had a great situation."

The Scottsbluff-Gering football game on Friday will be open to just family of players from both teams.

Maddie Ray led the Gering volleyball team to a sweep of Scottsbluff on Thursday.

McCook won a close battle with Scottsbluff on Friday in McCook.

The Bayard boys cross country teams ends its drought qualifying for the state meet. The Bayard girls also earned a berth in the meet.

Nebraska football announced five captains on Saturday. Adrian Martinez is one of them. So is the mustache.

The Scottsbluff tennis team took 11th in the Class B state championships behind a fifth-place finish by No. 1 doubles team of Lincoln Frank and Porter Robbins. Gering's Mark Karpf, Scottsbluff's Kade Huck earn wins in No. 2 singles.

Sam McKewon's Big Ten picks: Is Jim Harbaugh's seat about to get hotter?

Mitchell's Rylan Aguallo spins out of the grasp of Gering's Tyler Garrett during their game on Friday, Oct. 16 in Mitchell.

Gering's Lance Isaacs makes the catch while being ran out of bounds by Mitchell's Luke Hessler during their game on Friday, Oct. 16 in Mitchell.