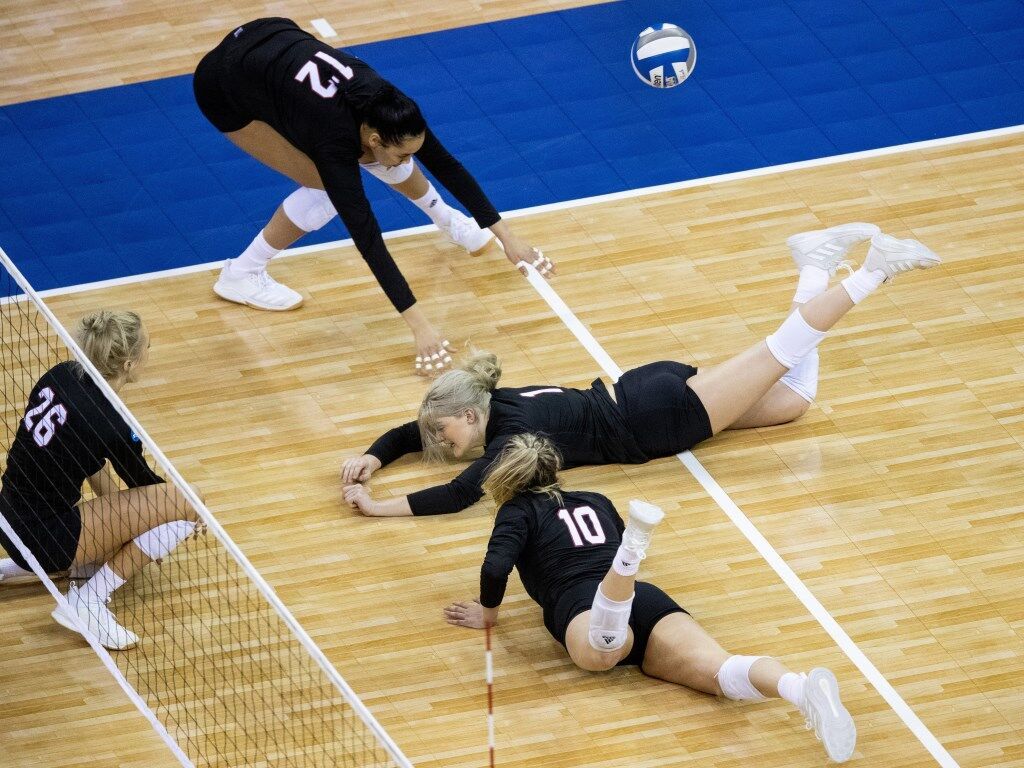 Lauren Stivrins, Jazz Sweet, Nicklin Hames and Madi Kubik were unable to come up with this dig to save a point against Texas. 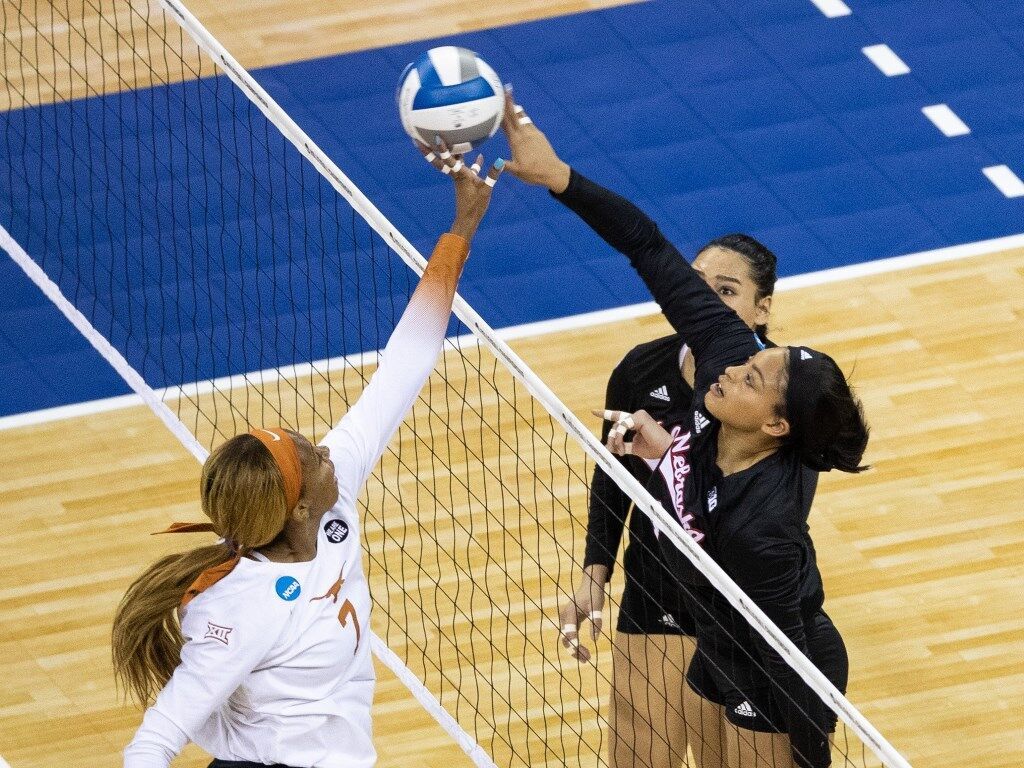 Nebraska's Kayla Caffey and Texas' Asjia O'Neal battle for a ball over the net.

For a few minutes in the fourth set, Nebraska appeared to have a strong grasp on the momentum.

The fifth-seeded Huskers had just scored seven straight points for a 13-8 lead, Texas had called both of its timeouts during the run, and the crowd of 4,154 was energized and loud. A fifth set looked inevitable.

But over the course of just a few minutes, Texas dashed those hopes.

The Longhorns climbed back into the match with a 7-1 run that featured three blocks, an ace, an NU service error and kills from Skyler Fields and Logan Eggleston. Less than 15 minutes later, Texas ended Nebraska’s season with a 25-22, 19-25, 25-15, 25-21 win in the regional final at the CHI Health Center in Omaha.

“They just were making plays, and we couldn't stop them,” Nebraska setter Nicklin Hames said. “It's hard. We let them go on a run, and so we kind of lost momentum ... It was hard for us to catch up at the end.”

No. 4 Texas beat Nebraska at its own game by winning the serve and pass game. Even though the Longhorns committed 15 service errors, they recorded eight aces and passed well enough to remain in system and hit .336.

Eggleston and Fields finished with 18 kills each as they rifled shots at the NU defense from the left pin. Eggleston finished with 53 attacks and tied a season-high five ace serves. Fields was more efficient, as she ended with one error and a .630 hitting percentage. She was at her best at the end of the third set, as the 6-foot-2 sophomore accounted for five kills during the final seven points.

“They totally outserved and passed us, and that was our only chance to hang with them,” NU coach John Cook said. “They're a big, physical team. They've got five great hitters, and you've got to put some stress on them, and we didn't do enough of that. We let them get some big runs, and so if we didn't pass well today, we were gonna have a hard time.”

Cook said Texas’ outsides created problems, as either one was usually matched up against the 5-foot-10 Hames. While the Huskers finished with six blocks, including five from junior Kayla Caffey, the Longhorns often hit over the block to an out-of-position defense.

The Huskers (16-3) won the second set behind their serving, which featured four aces, including three from Hames. NU’s offense was clicking as it hit .321 in the set. Meanwhile, the Longhorns committed five service errors.

“We won the serving pass battle in that set that we won,” Hames said. “Serving is super important because they have huge middles, huge outside that are great hitters, and you have to get them out of system to be able to stop them.”

Overall, Nebraska served well, with nine aces and just three errors, but too often struggled to side out. The Huskers finished with a 55.9 sideout percentage.

Each of the three sets NU dropped featured a key run in the middle of the set that gave Texas a cushion it rode out.

With the first set tied at 13, Texas scored four straight, including an ace and back-row kill from Eggleston.

Then in the third set, after a kill from Hames off a set from middle blocker Lauren Stivrins made it 11-10 Longhorns, Texas scored three straight, with two aces from Nalani Iosia.

After not playing in Sunday’s regional semifinal against Baylor, Stivrins was back in the lineup. She tallied just four kills in the first three sets but started the fourth on fire, with three kills on her first three swings. The 6-foot-4 senior finished with seven kills and a .357 hitting percentage.

Sophomore Madi Kubik finished with a team-high 15 kills, while Caffey chipped in eight on a .357 hitting percentage. Senior Lexi Sun recorded seven kills, and Jazz Sweet had five, but both finished with seven errors.

Hames had a double-double with 34 assists and 13 digs, which tied Sun for the team-high.

Nebraska reached the regional final for the ninth consecutive year, but for the second straight year, the Huskers’ season ended short of the Final Four.

After the match, Cook lamented the loss of several matches earlier this season against other top teams in the Big Ten because of COVID-19 outbreaks. Without those matches, he said, the Huskers weren’t ready for the physical style of play of top-flight competition.

“Texas played better today, so they deserve to win,” Cook said. “We haven't had the matches to build the toughness and the mindset you have to have to win these kind of matches. I think that that really hurt us today because we have to execute better than Texas, and so I think it showed today. Texas definitely took advantage of it.”

'We couldn't stop them': Texas goes on big runs to defeat Husker volleyball

Lauren Stivrins, Jazz Sweet, Nicklin Hames and Madi Kubik were unable to come up with this dig to save a point against Texas.

Nebraska's Kayla Caffey and Texas' Asjia O'Neal battle for a ball over the net.