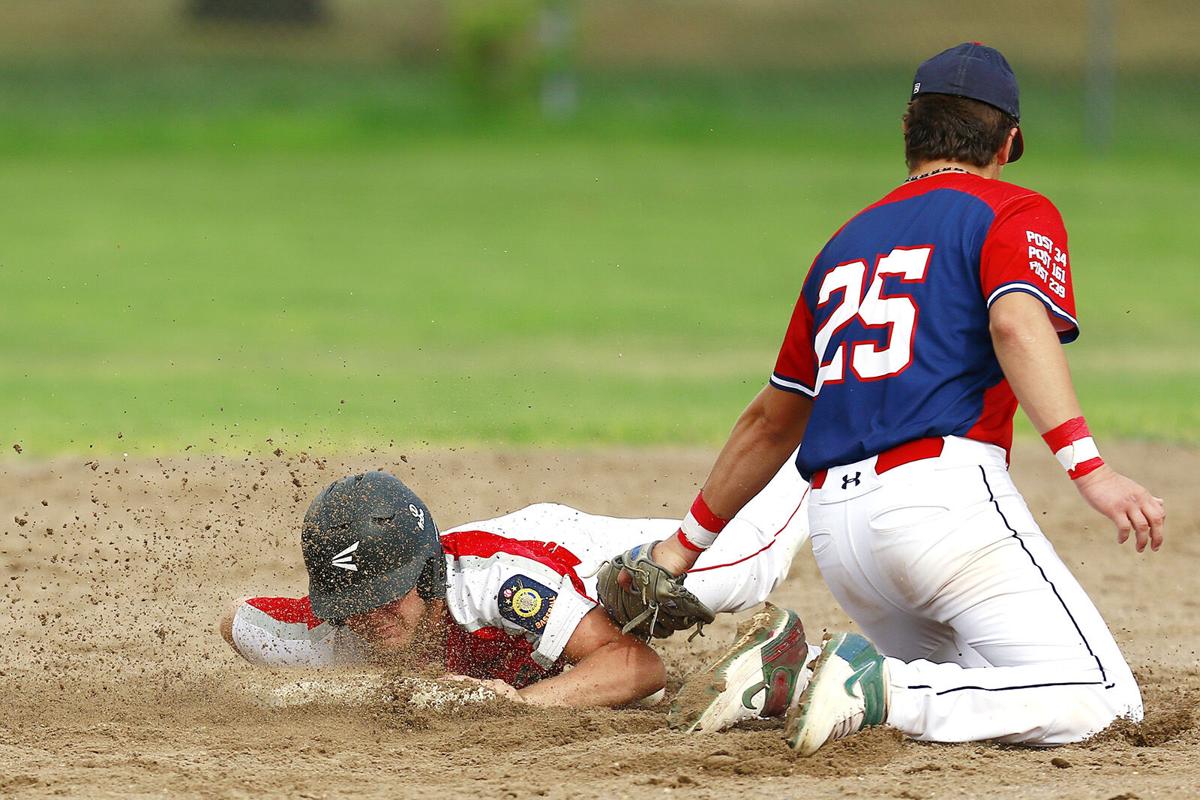 Chadron's Dan Wellnitz beats the tag of Sheridan County's Harley Bayne during their game in the COVID Conference Tournament on Saturday, July 25 in Alliance. 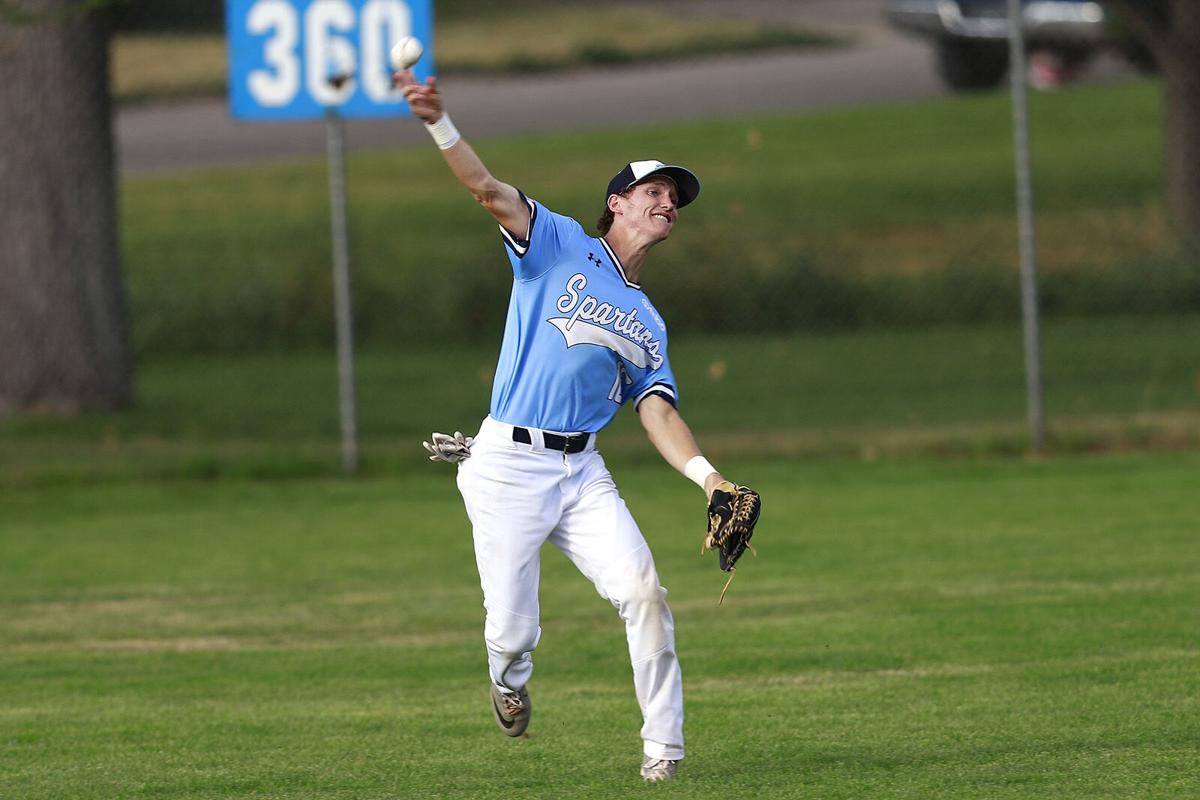 Alliance's Joel Baker fields the ball during their game against Gering PVC in the COVID Conference Tournament on Saturday, July 25 in Alliance. 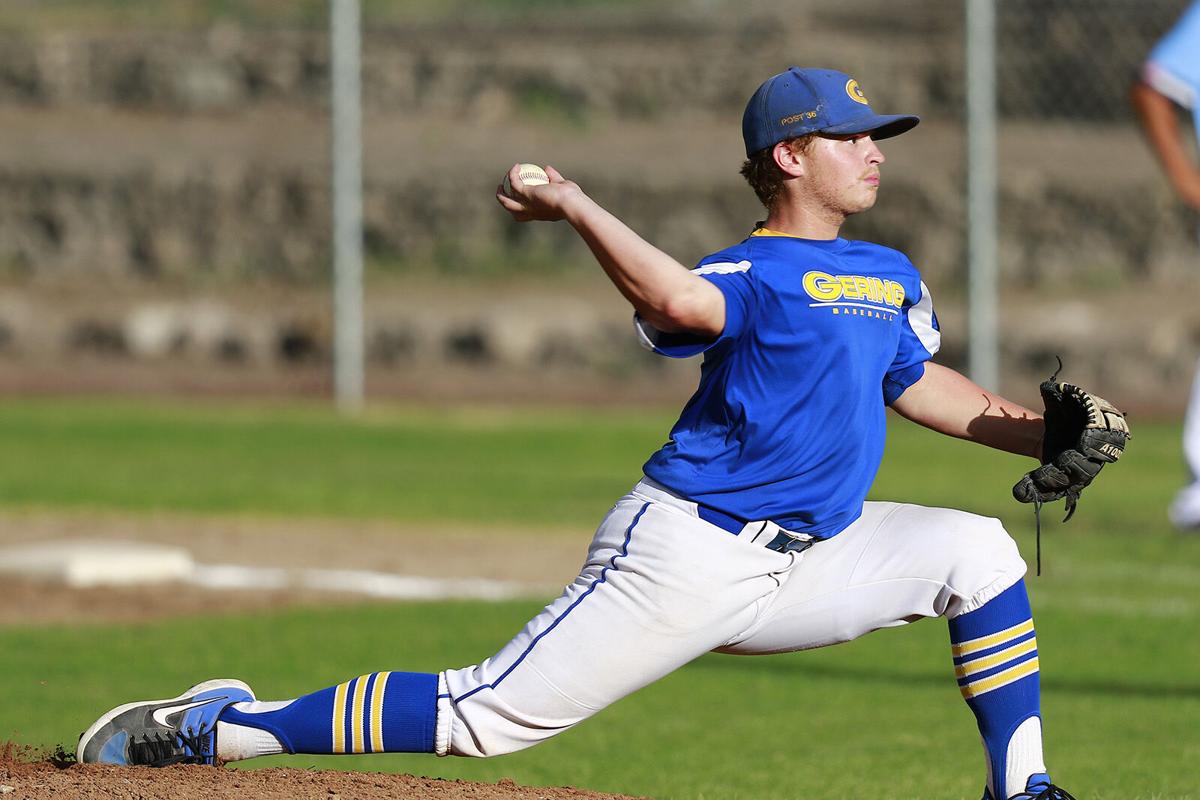 Gering PVC's Blake Greene throws a pitch during their game against Alliance in the COVID Conference Tournament on Saturday, July 25 in Alliance.

ALLIANCE — Gering Platte Valley Companies used steady offense to earn the 5-3 win over Alliance in the second round of the COVID Conference Tournament on Saturday, July 25.

Gering got on the scoreboard first when Jack Franklin scored on a single by Riley Hoke in the second inning.

Franklin accounted for another Gering score. Franklin scored Riley Schanaman on a sacrifice fly in the third inning and the 2-0 lead for Gering.

Alliance cut the the lead to 2-1 in the bottom of the third. Caeson Clarke flew out to right field, but Kirk Sanders tagged up and scored o the play to cut the lead to 2-1.

In the top of the fifth inning, Riley Gaudreault grounded into a fielder’s choice scoring Quinton Janecek for the 3-1 lead.

In the sixth inning, Gering’s Brady Radzymski drove in Dalton Weise on a line drive to left field fo the 4-1 lead. Schanaman singled on the next at bat scoring Janecek for the 5-1 lead.

A seventh-inning rally by Alliance fell just short, Joel Baker drove in Clarke and EJ Gomez to cut the lead to 5-3.

Radzymski had three hits in four plate appearances with one RBI to lead Gering offensively. Schanaman was for 2-for-3 with an RBI. Franklin and Gaudreault also recorded RBIs for Gering.

JJ Garza started the game at pitcher for Alliance pitching 4.2 innings and striking out seven batters. Garza also allowed six hits and three runs. Chase King pitched 1.1 innings striking out one and Collin Schrawyer had one strikeout in 1 inning of work.

Baker was 3-for-4 with two RBIs to lead Alliance’s offense. Clarke was 1-for-4 with an RBI.

In earlier action, Chadron erased an 11-4 deficit for the 17-12 win over Sheridan County.

Chadron outscored Sheridan County 13-1 over the last three innings, including nine in the sixth, for the win.

In the 9 a.m. game, Alliance rolled to a 12-1 win over Sidney, and Gering PVC downed Chadron 6-0 to setup the showdown with Alliance.

With the loss to Gering, Alliance faces Chadron today at 10 a.m. for a chance to play Gering for the tournament title at 1 p.m.

The Bearcats showed off its potent running game as they ran to a 27-20 win over No. 7-rated Grand Island Northwest on Friday.

Sedric Toney used his experience at WNCC to propel him to the NBA, where he enjoyed a nine-year career.

After a scoreless first half, Mitchell's offense exploded as they stay undefeated at 5-0 with a 35-14 win over Chadron on Friday.

Kimball's Payton Wise took first by a wide margin at the Bridgeport Golf Invite on Thursday. Payton shot an 82 for the win.

Cyclist competing in Robidoux Quick and Dirty realizes he has been to Scottsbluff/Gering in the past. Nathan Whitman brought his family to the area to watch the eclipse in 2017.

Alliance used a strong running and a big first half to earn the 35-6 win over Gering on Friday.

The Gering volleyball team had several players who stepped up to help them split their matches in the Sidney Triangular.

The Scottsbluff and Gering softball teams both went 1-1 in a quadrangular in Ogallala on Thursday.

Chadron's Dan Wellnitz beats the tag of Sheridan County's Harley Bayne during their game in the COVID Conference Tournament on Saturday, July 25 in Alliance.

Alliance's Joel Baker fields the ball during their game against Gering PVC in the COVID Conference Tournament on Saturday, July 25 in Alliance.

Gering PVC's Blake Greene throws a pitch during their game against Alliance in the COVID Conference Tournament on Saturday, July 25 in Alliance.