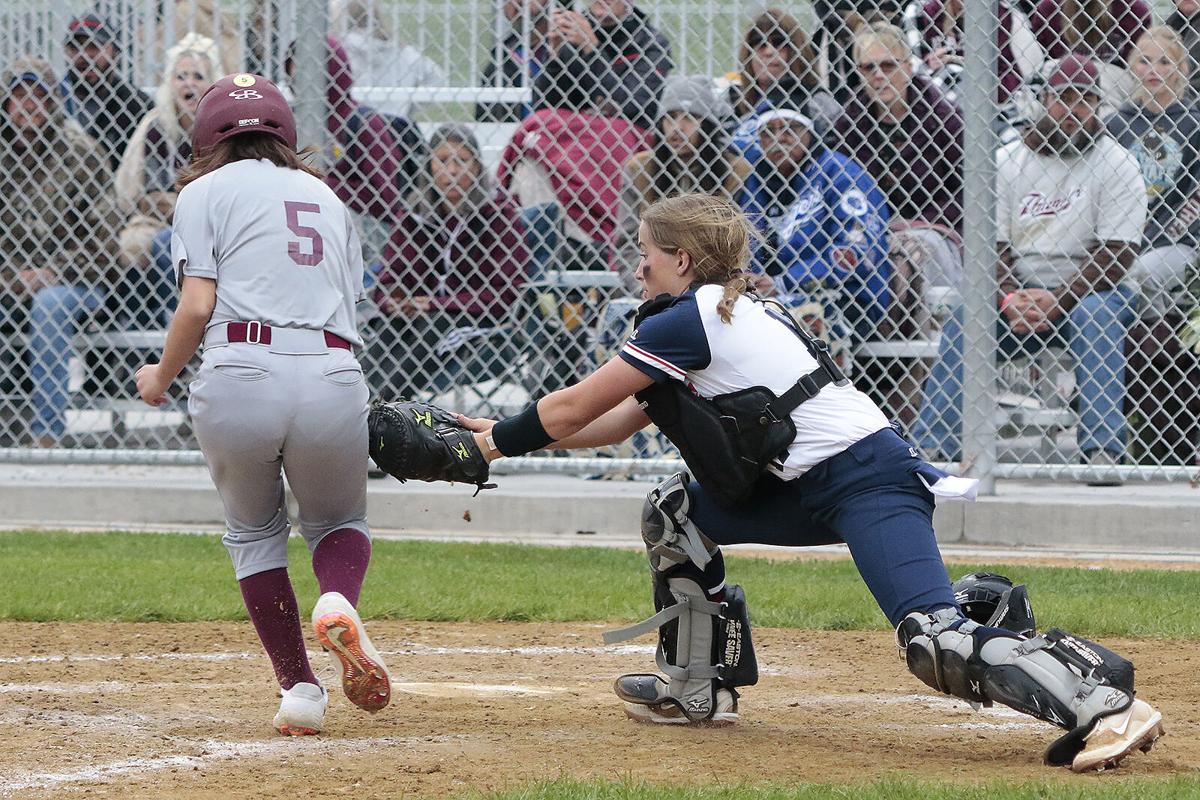 Panhandle Pride catcher Jacelyn Brown makes a tag on a Thunder baserunner at home plate during their game on Saturday, May 22. 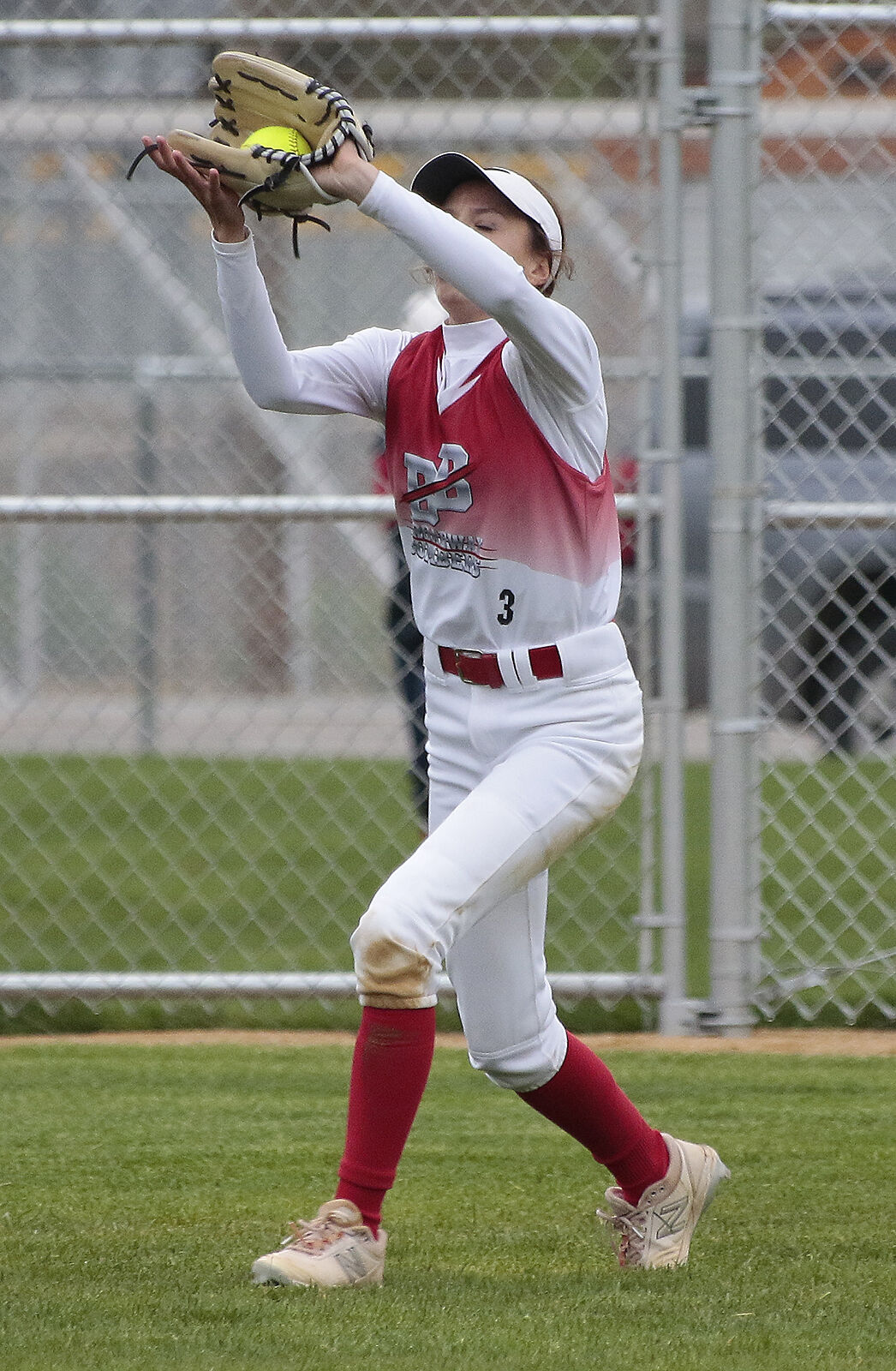 The Broadway Bombers Alex Jones makes the catch duiring a game in the Panhandle Pride Tournament on Saturday, May 22.

The inaugural Gering Panhandle Pride Softball Tournament — held from Friday, May 21 to Sunday, May 23 — was deemed a success by co-organizer Jared Michaelson.

The tournament drew in 28 teams, many from out of the area. Only eight teams from Gering and Scottsbluff played in the tournament.

He said they were short two teams from their goal. He was aiming for 30 teams, but was still pleased with the turnout, he said.

“Being the first year, we kind of didn’t really know what to expect,” Michaelson said.

Michaelson said it took a lot of leg work to draw teams to the tournament.

“We advertised a lot. We really pushed it to try to get these bigger teams,” he said. “We travel every weekend all over Colorado, Nebraska and Wyoming, so we were handing out flyers and telling them, ‘Hey, come to our tournament.’”

Michaelson said he got a lot of positive feedback during the tournament. All of the coaches he talked to said they liked it and would return.

Michaelson said the tournament was a long-time coming. He has had the idea for the tournament for a while, he said. They just didn’t have a complex big enough to host it.

“We’ve been traveling for five years now, all over the place. We wanted to play a tournament at home,” she said. “Since (the City of Gering) put in that complex, we had a place to do it.”

The weather did wreak havoc on the tournament with it raining and drizzling for much of it. The championship games for the 14 and Under, and 18 and Under teams were rained out on Sunday.

They did crown champions for both of those brackets based on their standings in pool play. Panhandle Pride from Gering beat out Wheatland Lady Lobos for the title.

In the 18 and Under bracket, The Broadway Bombers from Scottsbluff took the title over The Nebraska Aftershock from Kearney.

The 10 and Under Broadway Bombers also made the championship game. The Wyoming Mystix from Sheridan, Wyoming, won 11-7 over the Bombers.

The North Platte Belles claimed the 12 and Under title. The Belles defeated the Colorado Diamonds, from Denver, Colorado, 8-3.

All-star teammates ready to team up at the collegiate level

Jayla Brehmer and Jenna Curtis have played together in the past on club volleyball teams, now they’re teammates on the West team at the West N…

Scott Satterfield: “I think his big thing that he wanted to do, he wanted to come in and play and be a starting quarterback."

For a lot of area athletes, all-star games are a last chance to play at a high school level before pursuing a collegiate athletic career.

The Western Nebraska Pioneers played well offensively and from the mound to help them take a 9-2 win over the Casper Horseheads.

In the latest "Things I know" column, we cover Lee Sterling's lack of confidence in Adrian Martinez, and put some transfer news into perspective.

The East pounded down 50 kills led by MVP Sam Moore, of Mullen, as the East registered a 3-2 win over the West in the West Nebraska All-Star V…

Nebraska has put together an appealing slate of nonconference matches to go with a 20-match Big Ten schedule. Dive in with us.

Athlete warning: Follow the rules at Tokyo Olympics, or else

Panhandle Pride catcher Jacelyn Brown makes a tag on a Thunder baserunner at home plate during their game on Saturday, May 22.

The Broadway Bombers Alex Jones makes the catch duiring a game in the Panhandle Pride Tournament on Saturday, May 22.