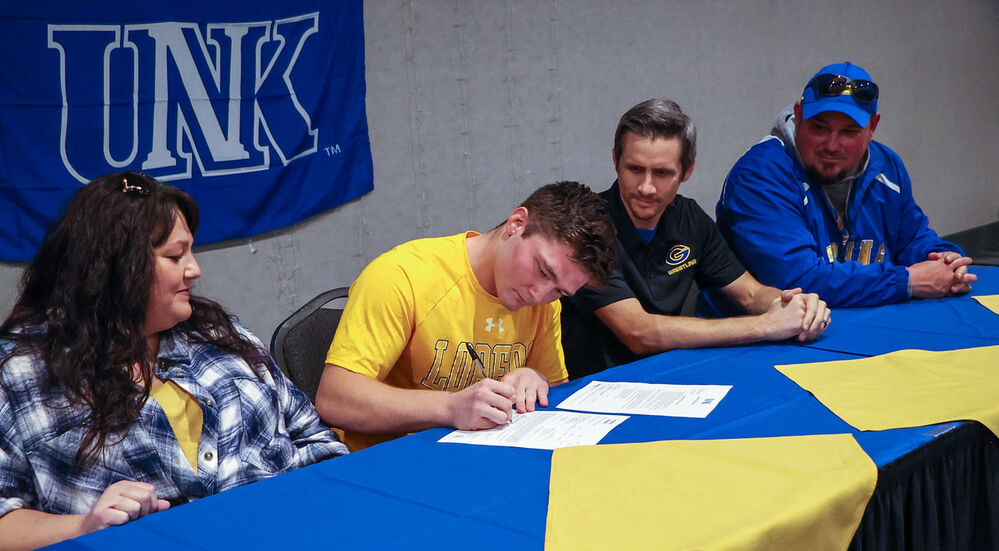 Gering's Jacob Awiszus signs his National Letter of Intent on Wednesday to wrestle at the University of Nebraska-Kearney. 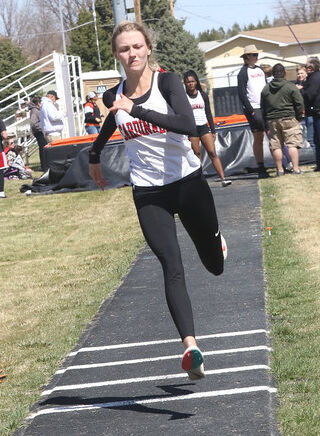 Tatum Bailey competing at the Mitchell Invite on April 8, 2021.

For high school seniors, the National Letter of Intent signings tell the athletes that they made it and can continue to compete but this time collegiately.

For Gering wrestler Jacob Awiszus and Chadron volleyball player and track athlete Tatum Bailey, they have completed that step as both signed their National Letters of Intent on Wednesday.

Awiszus will head to Kearney to wrestle for the Lopers at the University of Nebraska-Kearney, a school he has wanted to wrestle at since middle school.

“It’s been a dream of mine since about seventh grade when I really wanted to wrestle in college. UNK was one of those colleges I was starting to follow right away,” Awiszus said. “My practice partner Brock Smith is a UNK alumni and he helped play a little bit of a role in getting me on campus.”

The moment Awiszus stepped on the UNK campus, he knew that's the school he wanted to wrestle for and belonged at.

His family has been with him every step of the way and is proud of how far he’s come.

“It’s one of his dreams, so I’m just really proud of him,” Tarra Awiszus said. “It was a journey to get there and he set a lot of goals and always pursued them. I’m proud of him, he’s there and he made it happen.”

Coach Jarred Berger said that Awiszus has the right mentality to wrestle in college and believes he will fit right in.

“He’s built for college wrestling, physically and mentally and he’s what college wrestling is all about. We kind of saw that coming in as a freshman,” Berger said. “One really good attribute that he has is that he never counts himself out, never has ever whether he is wrestling the best guy in the state or his teammate. You have to have that mentality when you go to college, he’s going to fit right in and do very well.”

Once the season ends, Awiszus will take off the Gering name for the final time after having represented Gering throughout his childhood.

“It’s going to be weird not representing Gering for the first time since Kindergarten. I’ve been Gering all the way since then and now into my senior year,” he said. “I’m definitely going to try and bring the Gering name to Kearney.”

Bailey will continue her athletic career as a heptathlete with the Colorado State University-Fort Collins Rams track team.

“I picked there because coaching is a big deal to me and I know that the coach there is a lot like the coach I have in high school. It makes it comfortable and you don’t always know what you are going to get,” Bailey said. “I feel like that was one of the things that I was like, if I wanted to run track in college, that I knew I was going to be safe there.”

Even though she is excited to compete collegiately, it is also nerve-wracking to think about.

“It’s exciting but also nerve-wracking because you second guess yourself and think, am I ready for that, am I not,” Bailey said. “It’s one of those things where just believing in yourself and always having a supportive team puts you at ease.”

She chose to run track in college because she felt she would be more successful in this sport rather than volleyball.

Bailey will miss her coaches and friends, as well as the little things that she has had the last few years.

“I will definitely miss my coaches, friends and just the little things like bus rides with the people you’ve been with for 4+ years,” she said

Get in the game with our Prep Sports Newsletter

Sent weekly directly to your inbox!

Gering's Jacob Awiszus signs his National Letter of Intent on Wednesday to wrestle at the University of Nebraska-Kearney.

Tatum Bailey competing at the Mitchell Invite on April 8, 2021.