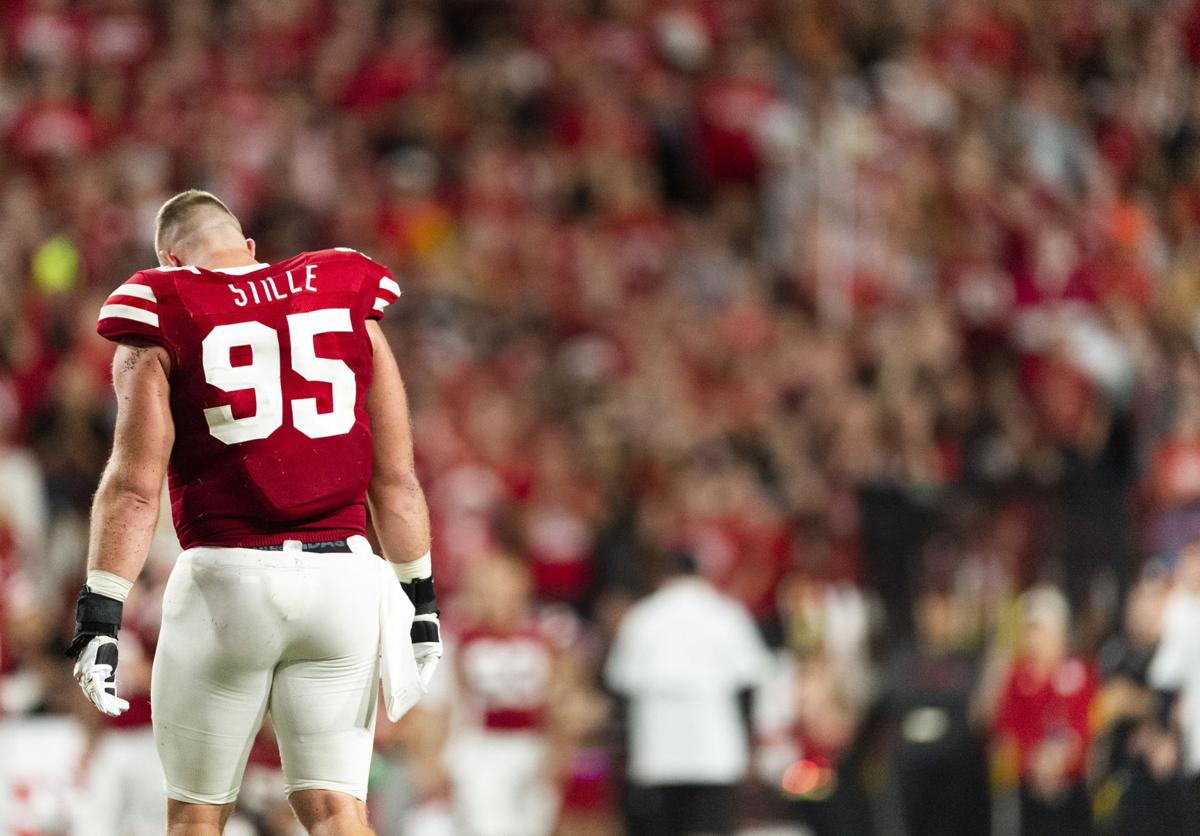 Nebraska sixth-year senior defensive lineman Ben Stille is one of several Huskers who will play his final collegiate game on Friday afternoon at Memorial Stadium. 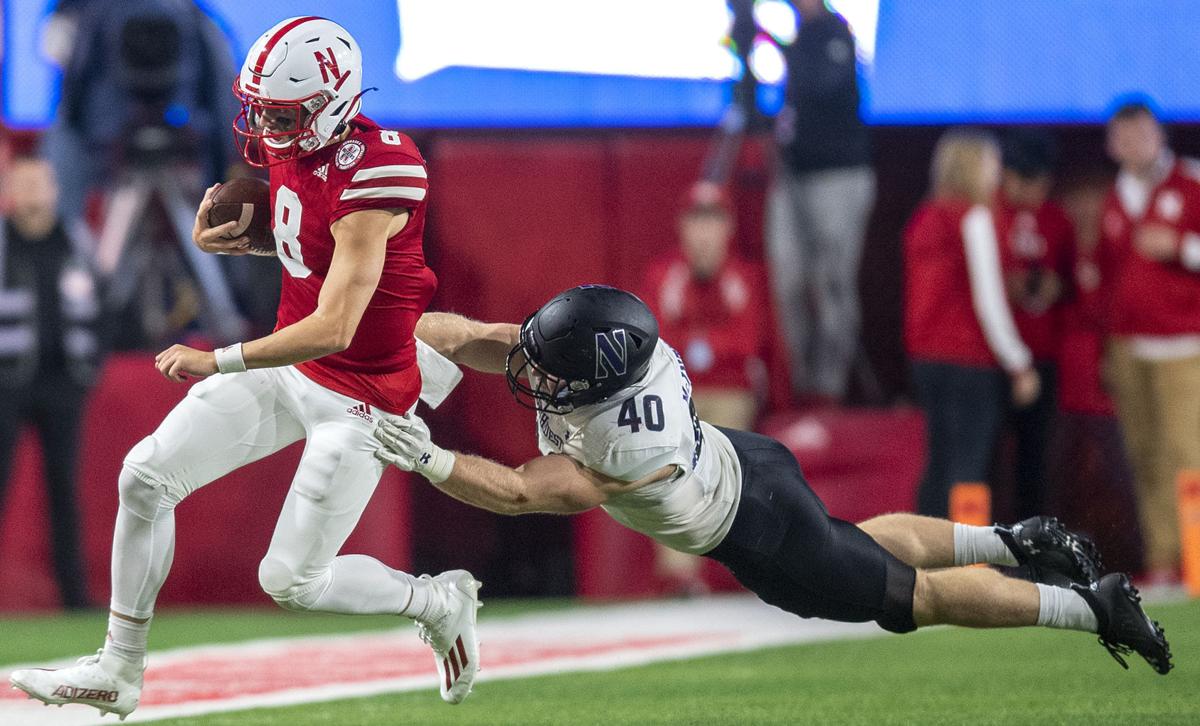 Nebraska quarterback Logan Smothers (8) runs the ball with Northwestern's Peter McIntyre (40) in pursuit in the third quarter on Oct. 2 at Memorial Stadium.

Nebraska closes out a disappointing 2021 season on Black Friday at home against Iowa. Here’s a closer look at how the Huskers and Hawkeyes match up.

How the Huskers light up the scoreboard

1. Rally around No. 8. Logan Smothers makes his first start. Nerves are inevitable. It wouldn’t hurt if the offensive line and skill guys around him picked him up and played inspired ball to help him settle in.

2. Grind it out. Nebraska’s running back group is beat up, but the Huskers did a nice job grinding out a little bit of production against Wisconsin. Can they take a step forward and make the run game a strong point on Friday?

3. RAC attack. If ever there was a week to turn a couple of safe throws into big plays, this is it. NU has confidence in Smothers, but it sure wouldn’t hurt to turn a slant or crossing route or quick-game throw into a field-tilter.

4. No gimmies. Iowa’s defense is graduate level in terms of taking the football away. The Hawkeyes have forced 26 turnovers and collected 21 interceptions. They might get one or two on Friday, but if NU gives an easy one away, the number could balloon.

Football, dads, loss and Erik Chinander's place at the small-town heart of the Nebraska vs. Iowa rivalry

How the Blackshirts shut ’em down

1. Stop the run. Let’s not make this more difficult than it needs to be. If Nebraska slows down Tyler Goodson, it’s going to be in the game. If the Hawkeyes run the ball like Wisconsin did, the offseason will arrive on a sour note.

2. Senior send-off. Several players will be in the stadium for the final time as Huskers: Ben Stille, Marquel Dismuke, Cam Taylor-Britt (in all likelihood) plus injured guys like JoJo Domann and Deontai Williams. Expect the healthy ones and the younger players to play like something’s on the line.

3. Wrap up. Wisconsin’s freight train of a freshman running back Braelon Allen ran through poor tackle attempts, big hit attempts, high tackle attempts. NU’s got to be sound in tackling Goodson and not giving the cut-back lane. When you fit it up right, you’ve got to finish.

4. Second wave. There might be more playing time in store for young players like Nash Hutmacher, Blaise Gunnerson and Isaac Gifford. Each had some good moments and some tough ones last week. Can they build quickly and put together a strong season finale?

Scouting Iowa: Breaking down the Hawkeyes

11: Number of Iowa players who have recorded an interception this year. Nebraska has 10 picks total.

(Not) under the radar

TE | No. 11 | Jr.: There’s no reason to look for under-the-radar players in this game. One may appear, but let’s give a couple of Nebraska guys who will be playing in their final games their due. On offense, it’s Austin Allen. He’s not the only one, but he’s put together a terrific season and needs 14 yards to break the single-season yardage record for his position. He’s already got several other marks and is a surefire NFL Draft pick next spring. Does he have one more big game left in him?

DL | No. 95 | Sr.: The sixth-year senior has been through a lot at Nebraska and seen a lot of change. He’s made himself from an outside linebacker into a physical defensive lineman. NU has generated a little bit more pass rush as the season’s gone along and the Ashland-Greenwood graduate has been a big part of that. If the Huskers can drum up some pressure on Alex Padilla and slow down the run, they’ll be right in the game against the Hawkeyes.

OK, so these two aren’t actually playing against each other, but it’s going to be a fun matchup to watch. If you like offensive line play and athletic centers, this is the game for you. Linderbaum is widely considered the best center in the country and a likely high draft pick next spring. Jurgens’ stock has surged this year and will have an NFL decision of his own to make after the season. They’re both used in unique ways and they both can do uncommon things from the middle of the field. Should be a fun pair to watch.

Do we even have to say it? OK, fine. Special teams

This isn’t difficult. Iowa is among the very best in the country in special teams and Nebraska is among the very worst. Charlie Jones is one of the best return men out there, while the Huskers haven’t found anything in that department this year. Tory Taylor is one of the best punters in the country and, while William Przystup has settled the position a bit for the Huskers, it’s still been a problem spot. Caleb Shudak has made 18 of 21 field-goal attempts this year and all 32 extra points, while three kickers have combined to make just 8-of-16 and miss four PATs for Nebraska.

Much like last week, this is a matchup between a team that often plays ugly and finds a way to win on one side vs. a team that plays a ton of close games and has found a way to lose all of them on the other.

There’s not much reason to think it’s going to go any way besides that on Friday, in particular with Nebraska having to lean on freshman quarterback Logan Smothers in his first career start. Nothing’s impossible, and NU has played Kirk Ferentz’s team to the wire in each of the past six years. The Huskers’ best chance is a spirited effort from a group hell-bent on sending a group of seniors off on a positive note.

The story this year for Nebraska, though, has been anything but a clean one. The bet here is that they’ll come up short one more time before the offseason.

Photos and video: The sights, sounds from Camp Randall Stadium, where the Huskers take on Wisconsin

Nebraska sixth-year senior defensive lineman Ben Stille is one of several Huskers who will play his final collegiate game on Friday afternoon at Memorial Stadium.

Nebraska quarterback Logan Smothers (8) runs the ball with Northwestern's Peter McIntyre (40) in pursuit in the third quarter on Oct. 2 at Memorial Stadium.