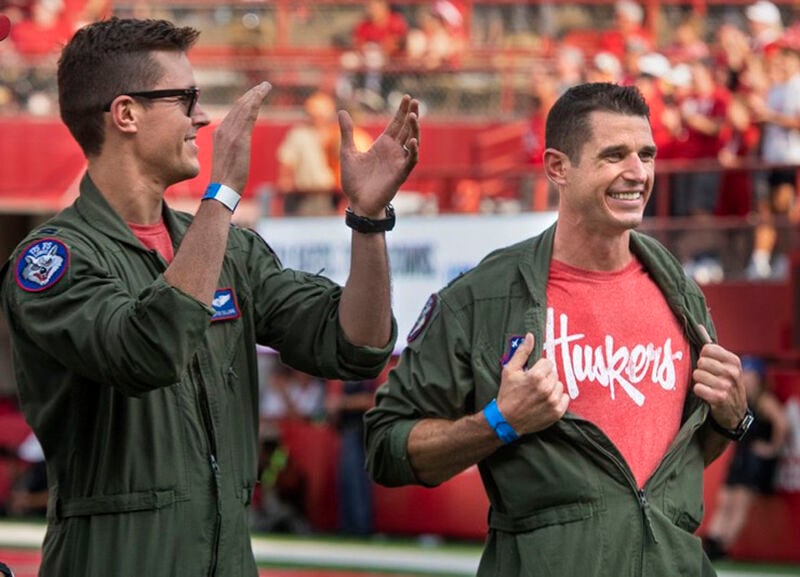 REPRESENTING: Former Wahoo residents Tony and Robert Sullivan show their Husker pride on Saturday prior to participating in a flyover of Memorial Stadium before the Nebraska/Buffalo game. (Lincoln Journal Star)

BIRDS’ EYE VIEW: A tanker boom operator photographs one of the F16s flying over Memorial Stadium as Tony and Robert Sullivan participated in the flyover on Saturday during the Husker game. (Photo provided by Tony Sullivan)

LINCOLN – Air Force pilot Tony Sullivan wasn’t a starter when he was on the Nebraska football team as a walk-on defensive end and special teams player from 2003 to ’07. He had one tackle during the ‘07 season.

But he must be on a very small and elite list of people who have played in a game for the Huskers at Memorial Stadium, and also piloted a military flyover over the stadium.

Sullivan was one of the pilots in the flyover on Saturday, flying an F-16 over Memorial Stadium.

There were four planes in the flyover – three F16s and one KC-135 tanker. One of the other F16s was flown by Sullivan’s younger brother, Robert Sullivan. They each grew up in Wahoo and attended UNL.

They’re both in the South Dakota Air National Guard and flew to Lincoln shortly before the game.

“We took off from Sioux Falls, South Dakota, about an hour before the game and met up with the tankers in air space, took formation with them and got ready and then flew over the field right at the end of the national anthem,” Tony Sullivan said.

They landed in Lincoln and drove to the stadium. The pilots and crew were introduced during the fourth quarter to huge applause. Sullivan got to visit the locker room after the game.

This was the first time Tony Sullivan has done a flyover for a Nebraska game.

“It’s been a dream of mine for a long time after playing here to be able to come back and do a flyover in the F16 with the Air National Guard for a game,” he said. “And to get to do it on the 9/11 memorial game, after 20 years, it’s pretty surreal.”

On their way back to South Dakota, the brothers did a flyover of their family’s home near Lake Wanahoo late Sunday morning.

Gene Chinander, the father of Nebraska defensive coordinator Erik Chinander, was killed in a one-car accident Thursday in Iowa.

Gene Chinander, the father of Nebraska defensive coordinator Erik Chinander, was killed in a one-car accident Thursday in Iowa.

After Minnesota's beat up Nebraska physically the past two years, Huskers say, 'We owe them one'

A 2019 game still sticks in Scott Frost's mind, particularly for what he perceived as "uninspired" play. Now, NU is "more of a grown-up team."

Stenger willed his Millard South team to a 35-21 win against talent-laden Bellevue West last month. Shortly after, his phone buzzed.

16 drives, 3 points: Why has Nebraska struggled so much in late-game, two-minute situations?

A deep dive on Nebraska’s production (and lack thereof) in two-minute situations under Scott Frost, with input from Matt Lubick and Mario Verduzco.

Nebraska found its 'complete back' in Rahmir Johnson, who started preseason camp fifth on depth chart

By turning consistent flashes to consistency, the New York native shot all the way up the depth chart. Here's how he did it.

Newsome steps up to the challenge, earns Blackshirt while starting every game this season

Not getting a Blackshirt when Nebraska distributed 12 of them in August "motivated me a lot," the Georgia native said.

The Cornhuskers inexplicably, incomprehensibly showed up without energy again Saturday – for the first time, actually, since August.

Red Report: Frost says Huskers prepared to give 'everything we've got' vs. Gophers before bye week

"We've got to win a road game," said Frost, who talked leadership and more as his team gears up for a trip to take on Minnesota.

Parker Gabriel weighs in with his report card from the Huskers' game against Minnesota.

Parker Gabriel and Chris Basnett break down Huskers-Gophers, and field your questions

REPRESENTING: Former Wahoo residents Tony and Robert Sullivan show their Husker pride on Saturday prior to participating in a flyover of Memorial Stadium before the Nebraska/Buffalo game. (Lincoln Journal Star)

BIRDS’ EYE VIEW: A tanker boom operator photographs one of the F16s flying over Memorial Stadium as Tony and Robert Sullivan participated in the flyover on Saturday during the Husker game. (Photo provided by Tony Sullivan)