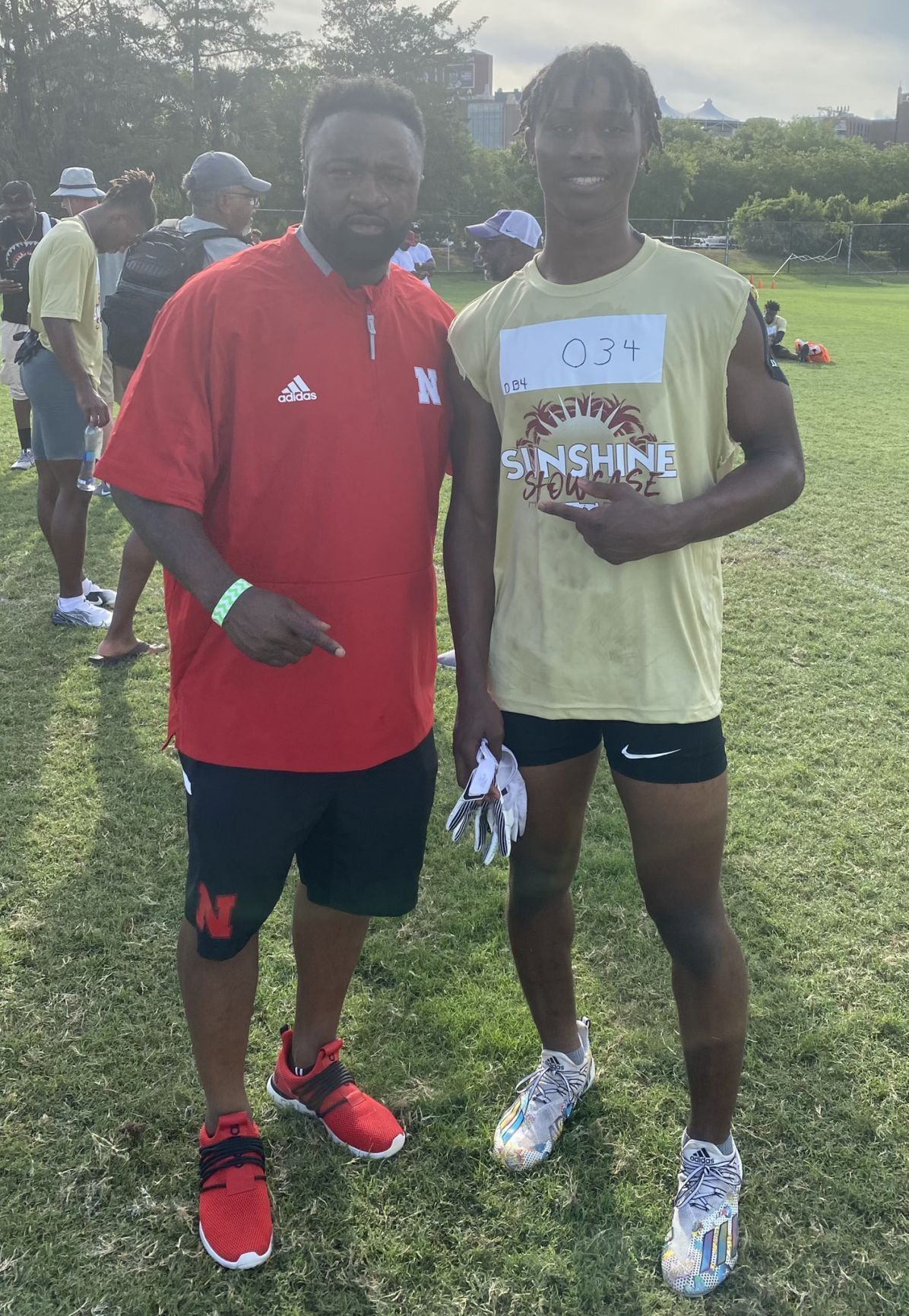 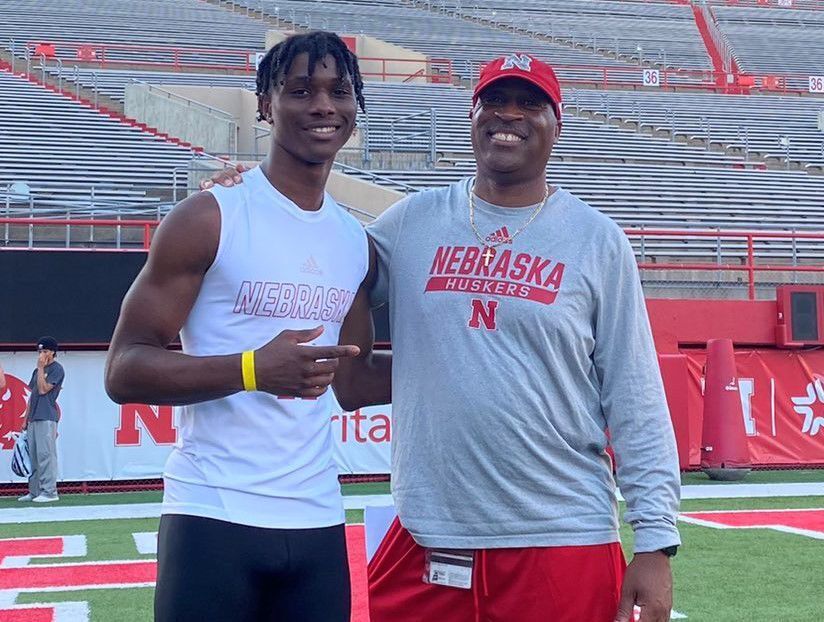 Quantaves Gaskins (left) and Sean Beckton spent a lot of time together during Gaskins' recent visit to Lincoln.

Sean Beckton and Ivery Gaskins are both smiling in the old photo, which looks like it was taken well before such moments were regularly shared to Twitter or Instagram.

The widest grin, though, arcs across the face of young Quantaves Gaskins, Ivery’s son, who barely reaches his dad’s midsection.

Ivery, as it happens, played for Beckton, now Nebraska’s tight ends coach, at Central Florida in the early 2000s during a 19-year run coaching at his alma mater.

Fast forward to this spring, and it’s the kind of photo many parents might use to try to help get their kid even the smallest perceived advantage. You see, Quantaves Gaskins is now a defensive back at Hapeville Charter high school in Atlanta. He just made the switch from quarterback less than a year ago in the midst of a year-plus recruiting dead period initiated by the NCAA due to the coronavirus pandemic.

That made it tough for him and other players all over the country to get noticed by college coaches. It made real, live evaluation impossible.

So when Quantaves and his dad started lining up camps to attend in June, surely Ivery would have reached out to Beckton or his former teammate, NU secondary coach Travis Fisher, to say hello and, hey, keep an eye out for my kid in the workouts, won’t you?

Instead, Ivery Gaskins did the opposite. He said nothing at all.

“His thing was, ‘I’m not going to call them, because I don’t want it to be like I’m trying to ask for a handout,’” Quantaves Gaskins told the Journal Star this week. “He told me, ‘You’ve got to go earn it for yourself.’ So I went into camp with that mentality.”

Quantaves Gaskins, now 6-foot-2 and 180 pounds, comes from a football family. His dad played at UCF. His uncles, Abram and Matt Elam, played their college ball at Notre Dame and Florida, respectively. Abram then played seven years in the NFL for five different teams, and Matt was drafted in the first round before playing three years with the Baltimore Ravens. Abram’s son, Kaiir Elam, is a standout cornerback at Florida.

That’s a lot of talent and a lot of know-how in the football world in Quantaves’ life.

“We all knew that he had a lot of the attributes that a lot of coaches look for when they’re recruiting and finding kids, so we just needed him to have the opportunity for him to be seen,” Abram Elam said. “As we continued to work, we were just waiting for the doors to open up.”

Dad’s don’t burn bridges. We may need to cross them one day 💯 pic.twitter.com/1iyBhjKuyO

First, Gaskins had to get himself into the right position on the field. He transitioned to playing defensive back less than a year ago, understanding that it was in his best interest long term.

“You could see the physical talent, you could see he’s very athletic, but he was raw as far as techniquewise,” said Kevin Pope, a defensive back trainer and Hapeville’s defensive coordinator. “But the one thing that made him so much better is that he constantly works every day. We worked every day in some capacity, working on various types of techniques. … Another thing that he really, really honed in on was his footwork and his lateral quickness, being able to transition well by loosening his hips. I was proud of him for that.”

Gaskins worked out regularly with Pope and his group of college and pro wide receivers.

Yeah, Gaskins couldn’t put the work on display for college coaches right away, but he and his circle of people aren’t the types to take the negative view on, well, anything.

“The good thing about it — you have to look at the positive of it — was that he had an opportunity to really, really work on his technique, really hone in on how to play the game and really, really perfect his craft. That was the positive of it,” Pope said. “The negative of it is every kid wants to go out and get an offer and things like that, and it’s hard not to worry. But it’s just timing. And at the time, when he was doing his work, it wasn’t necessary.”

Show on the road

High school players have known for months now that June would be critical on the recruiting calendar.

Gaskins and his dad put together a plan to get to as many places as possible. Gaskins has already worked out at Iowa State, Wisconsin, Nebraska and Florida State this month.

“Ivery’s done a great job of raising Quantaves, putting him in the best situation to be successful, and Quantaves is sticking to the script and executing the plan,” Elam said. “We already had the blueprint. … He’s seen what success looks like, and now he just has to walk in it and execute.”

June has been a grind, all the same.

"We just needed to get in front of these coaches and put on," Gaskins said. “It was definitely exhausting, but I feel like the hardest part was mental. Just staying locked in, staying focused and keeping what’s important to me in my mind.

“Especially with it being so late for me, I’ve got to make up for the lost time.”

Nebraska head coach Scott Frost and defensive coordinator Erik Chinander liked what they saw from Gaskins in Lincoln, but also knew Fisher was going to be at the Florida State camp. Once the NU secondary coach saw Gaskins in person, the Huskers pulled the trigger with an offer. By that time, Kansas State had done the same.

“It’s a true testament of his hard work,” Elam said. “He’s stayed the course, stuck to the plan and continued to challenge himself to work and get better each day. Now people are starting to take notice of him."

Said Gaskins, “I just kept pushing, and at the end of the week I was able to walk away with two birds in the hand.”

Later in the week, Gaskins picked up offers from Georgia Tech and South Carolina, and the month isn't near done yet. Georgia wanted him to work out privately during a 7-on-7 tournament and Gaskins was planning a swing through the Carolinas. He’s also planning to get to Missouri and Northwestern.

In fact, the Wildcats were the only Power Five school Gaskins said he had regular contact with before June began. His phone back then? Quiet.

Gaskins, Elam and Pope each pointed out proactively, too, that while the 2022 prospect will undoubtedly benefit from the shared football experiences in the family, they’re not calling in any favors.

“You want them to genuinely be interested in your kid, not because of, ‘Oh my dad’ or ‘my uncle,’ you know?” Elam said.

Nebraska’s interested and so are plenty of others. Gaskins won’t be making a snap decision. After his conversation with the Journal Star, he tweeted a photo of a big spreadsheet full of fields for different pluses and minuses of different colleges.

It was blank, but it won’t be for long. This particular journey is just getting started, even if the blueprint has long been laid out.

“We plan to get through this month, see what we can get,” Gaskins said. “Hopefully we can get a nice handful of schools to where we can make a really good, sound decision.”

Three observations following a pledge from Valen Erickson, who becomes the first offensive line commitment for the Huskers' 2022 class.

At the college level, the Huskers believe he could end up either at tackle or at guard.

Quantaves Gaskins (left) and Sean Beckton spent a lot of time together during Gaskins' recent visit to Lincoln.