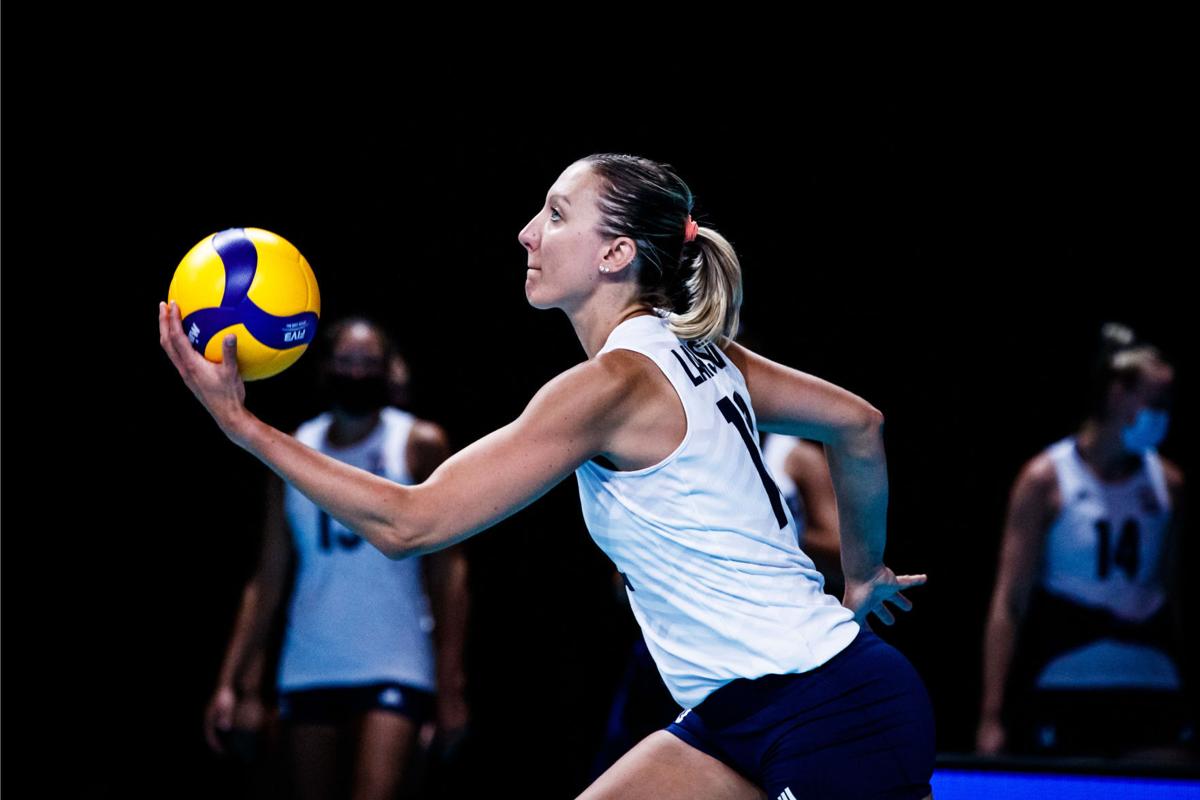 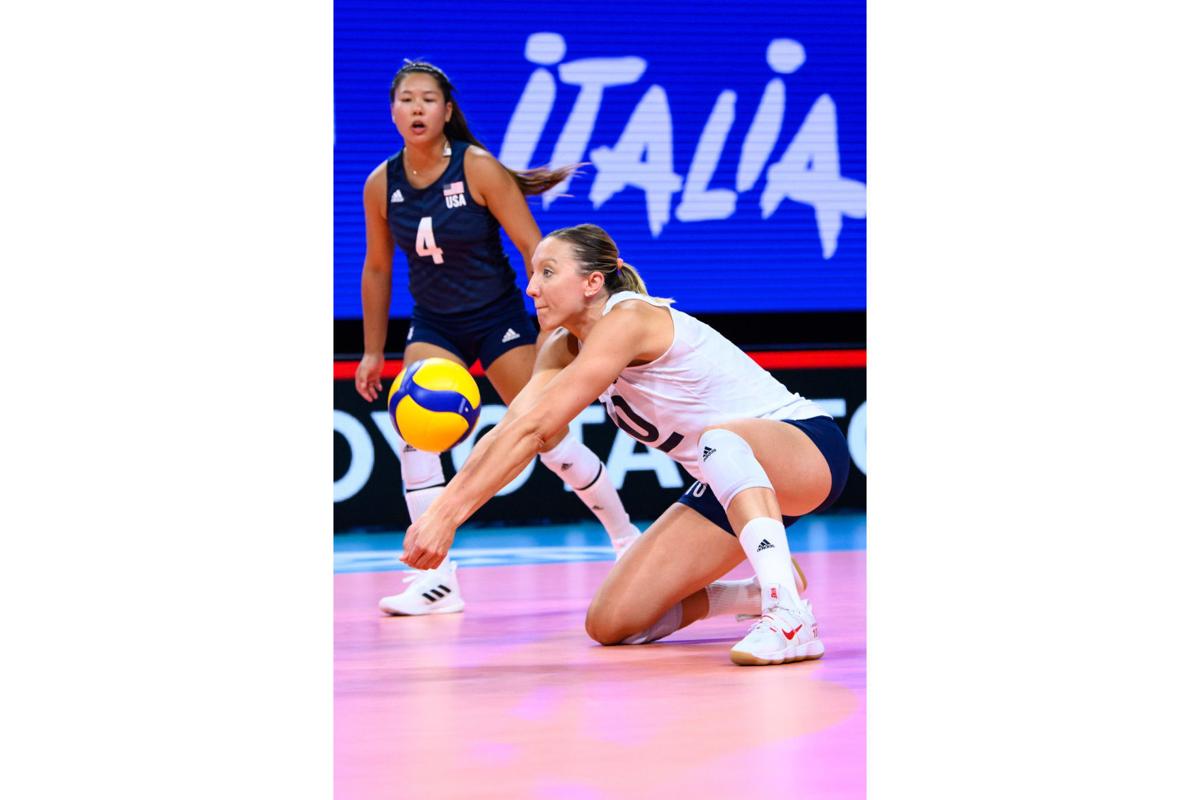 Jordan Larson passes a serve during the Americans’ three-set win against Dominican Republic on May 25 in Rimini, Italy.

For 12 years Jordan Larson has played for the United States national volleyball team.

Now, Larson in on the ground in Tokyo, about to play in her third Olympics, a remarkable accomplishment for the three-time college All-American while playing for Nebraska from 2005-08.

Maybe this will be the final time she represents her country at the highest level, capping an international career that includes winning a world championship in 2014, the Olympic silver medal in 2012 and an Olympic bronze medal in 2016. But that’s only “maybe” she’ll be done.

The 34-year-old Larson has signed a contract to play professionally in China next fall. She also plans to play in the Athletes Unlimited pro league in the United States next winter.

Will the next two weeks be the final time Larson plays for Team USA?

“I think so,” Larson said. “I make fun of one of my teammates because she’s like, ‘I’m going to retire.’ And that was after the Beijing Olympics. I don’t know. I don’t want to put all of my eggs in that basket because who knows what the future holds. I feel like I’m actually in the best shape that I’ve been in a while. Physically I feel like I put in great work in the weight room. I feel good.”

The Americans’ first match is Saturday against Argentina. The medal matches are Aug. 7.

Larson appreciates each time she’s got to play for the U.S.

“It’s been amazing,” she said. “I can’t believe I’ve been doing it for this long. Sometimes it feels like this is my first time. I still feel like that girl making my first junior national team. And here I am 12 years in. I’m just really grateful to be a part of it for so long and represent our country for this long.”

Larson traveled to Tokyo last weekend feeling both anxious and excited about the Olympics.

The Olympics were delayed from 2020 to this summer due to COVID-19. Larson is one of three former Huskers playing for team USA, including second-time Olympian Kelsey Robinson and Olympic rookie Justine Wong-Orantes.

Inside ex-Husker's Justine Wong-Orantes' bid to become the lone libero on the U.S. Olympic volleyball roster

The U.S. team includes four Olympic veterans and eight newcomers, so the 12-month delay may end up being a benefit.

“I’m feeling very good,” Larson said. “I think if you would have asked me last year about this time I don’t know if we were ready as a team culturally. There were some new players, and there was a lot of unknowns. There was just a lot of uncertainty and I think that we have put in a lot of work off the court.”

Now Larson feels good about the communication and culture of the team.

“Now I feel like we’re all pulling from the same end of the rope,” she said.

The U.S. enters the tournament ranked No. 1 in the FIVB world rankings, followed by No. 2 China and No. 3 Brazil. China won the gold medal at the 2016 Games.

The Americans won the FIVB Volleyball Nations League last month, which was the only major tournament held leading up to the Olympics. The Americans had a 16-1 record in the tournament.

That victory makes the U.S. a contender to win, but not every team played its top players in that tournament.

“I think it was a great competition for us as far as getting competition reps,” Larson said.

Before starring for the Huskers, Larson played high school sports for Logan View in Hooper. Her dad, Kevin, lives in Hooper where he farms and teaches part-time at the community college in West Point.

Kevin attended the previous two Olympics, but won’t be able to go this time due to fan restrictions.

“I think he was sad. He wanted to experience it,” Larson said. “I think he’s had a great time at the other two.”

Earlier this year Larson was thrilled to be able to play professionally in the United States for the first time, after a decade of playing for pro clubs in Russia, Turkey and China.

Larson is currently the focus of a docuseries that followed her playing in the U.S. pro league and preparing for the Olympics.

Nebraska hadn't lost consecutive matches since 2018 — and a two-game losing streak is causing a bit of a stir around here.

Nebraska coach John Cook made his boldest lineup decision yet this season, going with freshmen at the two starting outside hitters spots.

Next Saturday will be a big day for Huskers fans: volleyball at 2 p.m.; football at 6 p.m.

“We gave it away,” Cook said of the Huskers, who won the first two sets before Utah slipped back into the match.

The Huskers have difference-makers on defense, and John Cook is shifting his substitution tactics to get them on the floor more.

John Cook on the radio: What convinced John Cook to recruit Lexi Rodriguez, and the Rodriguez-Knuckles dynamic

The duo of Lexi Rodriguez and Kenzie Knuckles, along with defensive specialist Keonilei Akana, has made defense a strength of the Huskers.

Jordan Larson passes a serve during the Americans’ three-set win against Dominican Republic on May 25 in Rimini, Italy. 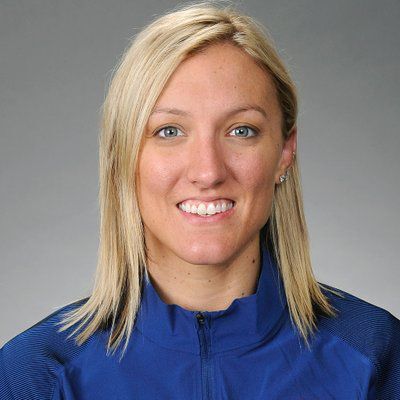