Wednesday's edition of the Star-Herald will arrive late

'They should feel really proud': Nebraska finishes regular season with win against No. 6 Purdue
0 Comments
Share this
{{featured_button_text}}

The Nebraska volleyball team will go into the NCAA Tournament with one of its best wins of the season after beating No. 6 Purdue in four sets on Saturday.

At No. 6, Purdue is the highest-ranked opponent No. 11 Nebraska has beaten this season. It's Nebraska’s second top-10 win of the season.

The NCAA Tournament selection show is at 7:30 p.m. Sunday on ESPNU, with the tournament beginning later in the week.

Purdue entered the match as one of the hottest teams in the country, with a nine-match winning streak that includes two wins against No. 5 Wisconsin.

Nebraska could have had a letdown against Purdue after Friday’s four-set to Wisconsin likely dashed the Huskers’ hopes of winning the Big Ten title.

During practice on Saturday, Nebraska coach John Cook challenged the team to show him how well they could respond.

“We got to be really happy with how they responded,” said Cook on the Huskers Radio Network.

Purdue’s two lowest hitting percentages of the season have come during losses to the Huskers.

Lexi Rodriguez had a season-high 28 digs to lead Nebraska’s defense.

"We were almost flawless" — Huskers start strong, then rally twice to continue their run against Penn State

“(Rodriguez) was really good,” Cook said. “And not only was she digging the ball, she was digging them right to (setter Nicklin Hames). It started to remind a little of 2017 where every ball went to (setter Kelly Hunter), no matter how hard the hit was. It was good to see her respond because she struggled (Friday).”

Madi Kubik led the Huskers with 16 kills. Nebraska’s middle blocker was a major strength with 23 combined kills. Kayla Caffey had 13 kills on 20 attempts without an error for a season-best .650 hitting percentage. Stivrins had 10 kills.

“Kayla was seeing the court,” Cook said. “She gave them every shot tonight — tips, roll (shots), pounds. She was just really seeing the block well.”

Nebraska dominated for long stretches of the match. In the second set Nebraska went on a 9-1 run to lead 10-3. To end that set Keonilei Akana served an 8-0 run that included two ace serves.

“You’re just hoping somebody takes it,” said Cook of those positions. “I guess we’ll just play them all and whoever is hot (plays). I don’t know what else to do.”

While Nebraska had set out this week to beat Wisconsin to win the Big Ten title, Cook is proud of finishing second in the Big Ten. There are some really experienced teams in the league, but the Huskers had success while playing four freshmen a lot.

“I told the team they should feel really proud about (finishing second),” Cook said. “This is a grind conference this year. There is a lot of really good teams. There are five or six teams that could go all the way to the Final Four and compete for a national championship.” 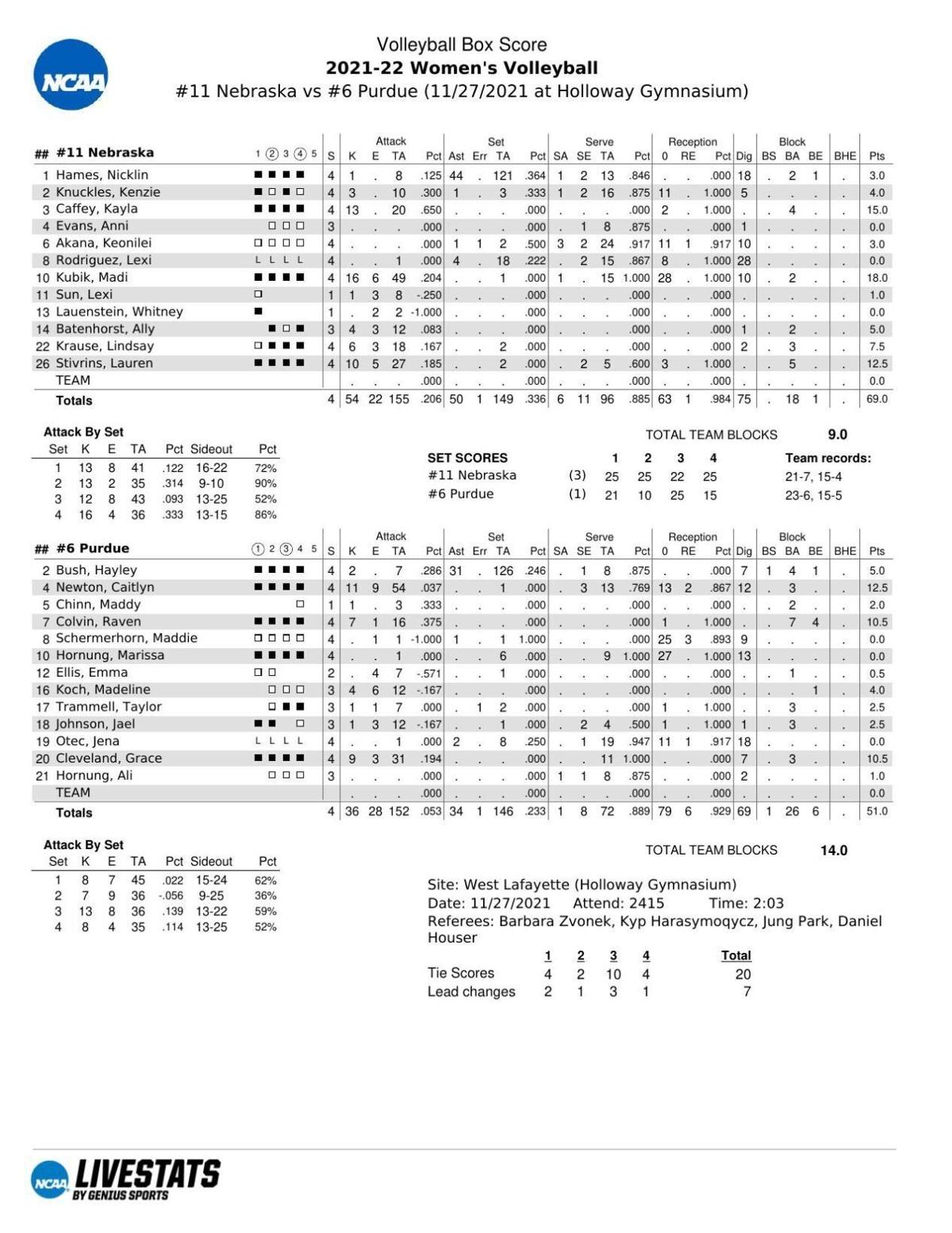 Jordan Larson will wrap up her playing career then jump right into a full-time gig with the Longhorns. Here's how it all came together.

If NCAA approves it, Kayla Caffey plans to play for Nebraska volleyball in 2022

If NCAA approves it, Kayla Caffey plans to play for Nebraska volleyball in 2022