Both teams set up at the line of scrimmage in Saturday's match-up in Grand Junction, Colo. 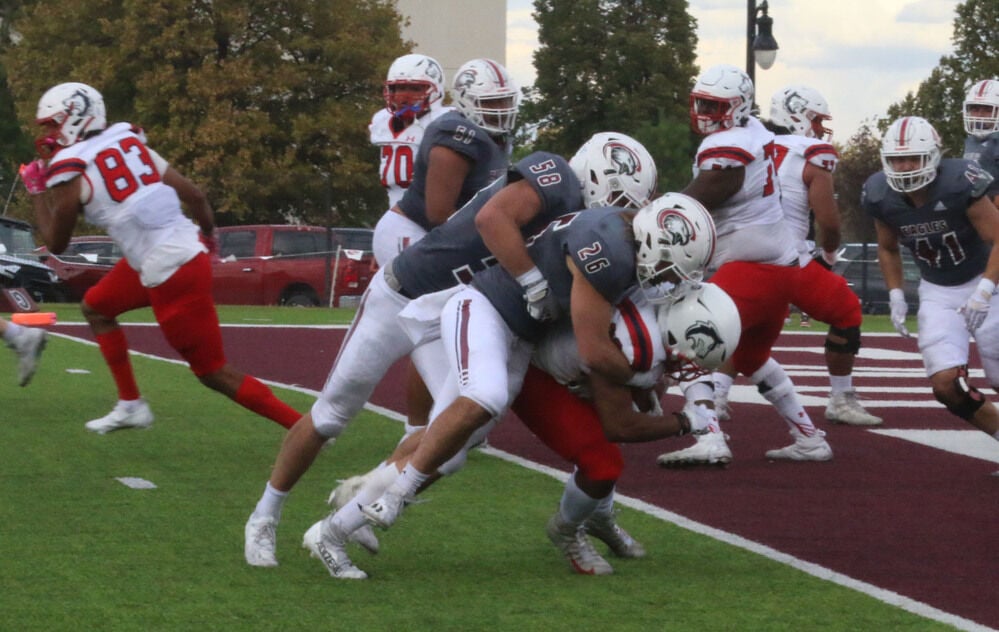 The Chadron State College football team was one touchdown shy of a comeback on Saturday in Grand Junction, Colorado, losing a close one 24-17 to the Colorado Mesa University Mavericks. CSC fell to 1-3 on the season, and 1-2 in the Rocky Mountain Athletic Conference, while Mesa improved to 3-0 (2-0 RMAC).

“We were in the game at the end,” said CSC Head Football Coach Jay Long. “We just have to find a way to get it in the endzone. We were moving the ball up and down the field, but we weren’t finishing our drives. We gave up two drives that we’d like to have back, and the defense played well, but we’ve got to find that endzone.”

The CMU defense used quarterback pressure and turnovers to spoil what was otherwise a productive day for the CSC offensive unit. Six times the Eagles advanced the ball into opponent territory and left without points, due to a combination of big plays by the other side and missed field goals. CSC outgained its opponent 402 yards to 327 on the field, but came up short on the scoreboard.

Despite winning time of possession by seven minutes in the first half, and outgaining its opponent 190 yards to 145, CSC only managed three points in the first 30 minutes. The Eagles opened up scoring at 11:34 in the first quarter, when a 39-yard field goal by Gunnar Jones capped the opening possession of the game.

When a Chadron State drive stalled on a pair of penalties in the second quarter, CMU capitalized, driving from its own 36. A 29-yard completion from Karst Hunter to Elijah Lilly was the longest play of the first half, by either team, and took the Mavericks inside the Eagles’ red zone. Four plays later, Lionell McConnell walked into the endzone on a sideline pass from Hunter to give CMU a 7-3 lead.

A botched fake punt attempt by Mesa inside its own 20 gave the Eagles a short field, midway through the third quarter, however CSC was unable to convert it into points.

Following the takeover by the Eagles, their offense was forced off the field without a first down for the first time in the game, and Jones missed his second field goal attempt of the day.

On the ensuing possession, Colorado Mesa found a spark on offense. The Mavericks registered first downs on their first two plays, before Avian Thomas rushed down the sideline for 50 yards and a score, putting the Mavericks up 17-3 at 5:36 in the third.

The Eagles got a spark of their own on a 41-yard strike from CSC’s Dalton Holst to receiver Jahani Wright, but the Mavericks answered with a 79-yard touchdown drive, with CMU’s Dwight Blakey punching the ball in the endzone as the third quarter expired to make it 24-10 Mesa.

Twice in the fourth quarter CSC was thwarted in CMU territory. Two minutes in, Torren Calhoun forced a sack fumble at the Mesa 47, and it was recovered by the Mavericks’ Kaden Stewart. With five minutes remaining, Mesa’s Damar'ren Mitchell picked off a Holst pass at the CMU three-yard line.

Chadron State finally found the endzone again with 2:32 remaining in the fourth quarter. Holst found Jamal Browder for 21 yards, and the Eagles were aided by two pass interference calls, driving the ball inside the CMU five-yard line where Elijah Myles carried it in to close it to 24-17.

On CSC’s final drive, however, the Eagles committed two offensive penalties and for the second time in the game, failed to convert a single first down.

Holst finished the day 28-for-49 with 286 yards passing and a score, while giving up a fumble and an interception. He was sacked four times.

The Eagles managed just 116 yards on the ground, led by Myles’ 75 yards on 18 attempts.

Jeremiah Makahununiu and Noah Kerchal were Chadron State’s leading tacklers, with nine apiece, and each linebacker had a half tackle for loss.

For the Maverick defense, Mitchell led the tacklers with 13, and he also added the interception and a pass breakup. Remington Green had 12 tackles, including a tackle for loss, a half sack, and two quarterback hurries.

Mesa running back Thomas recorded 111 yards on 14 carries, while Hunter finished 19-for-30 passing for 172 yards and a touchdown. Blakey was the Mavericks’ leading receiver with eight catches for 86 yards.

The Knights travel to Cougar Palace on Wednesday for the first matchup between the two teams in over a decade.

Both teams set up at the line of scrimmage in Saturday's match-up in Grand Junction, Colo.