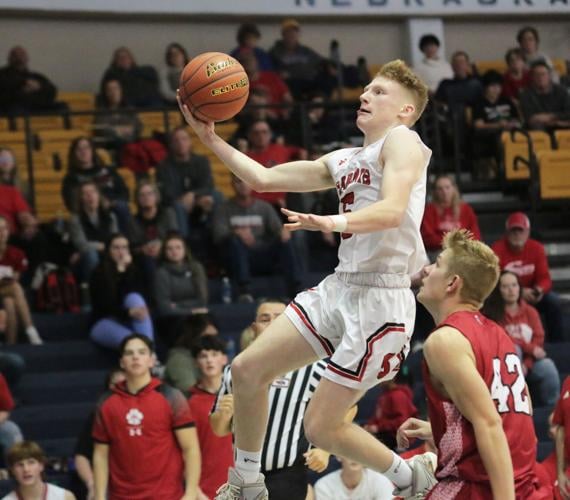 Scottsbluff’s Nate Kelley goes up for a shot in their Western Conference finals matchup against Sidney. 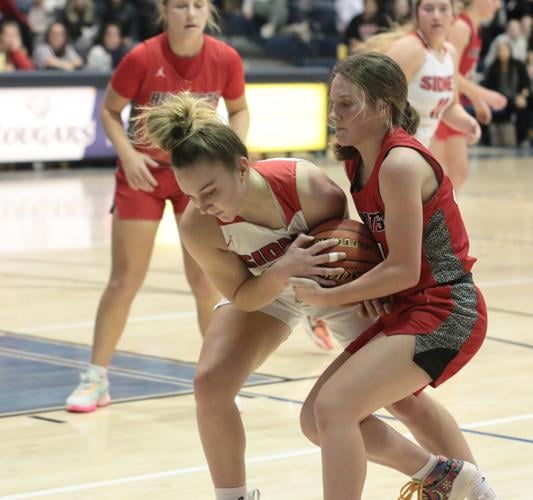 Sidney’s Kayla Westby and Scottsbluff’s Marly Laucomer fight for possession of the ball during the Western Conference Tournament finals. 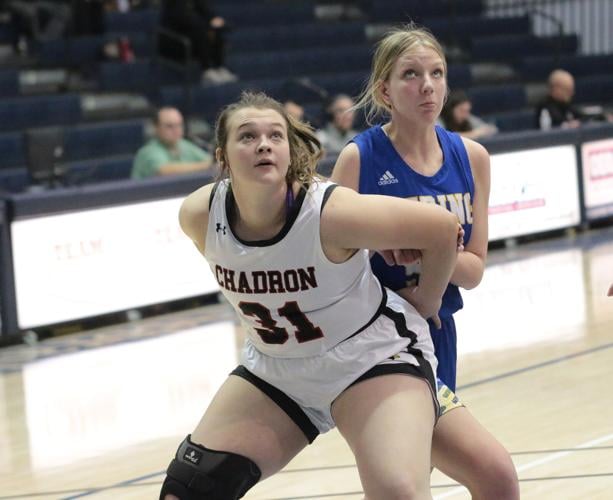 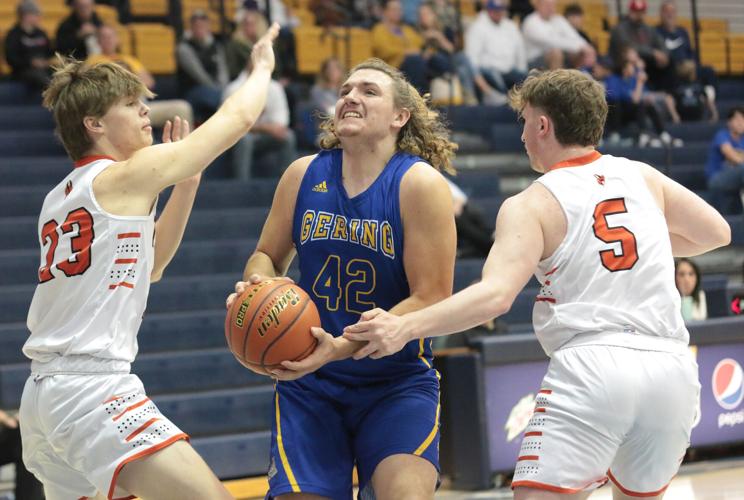 Gering's Kaden Bohnsack goes up for a shot between Sterling's Ben Browning (5) and Logan Zwirn (23).

The Western Conference Tournament finished on Saturday with the Scottsbluff boys and Sidney girls winning the tournament at Cougar Palace to open the season 3-0.

The Raider and Bearcat girls got the first place matches going with Sidney leading from the start to win 51-37.

“I just am really proud of how our team played, kind of as a team, as a unit, and everybody trying to fill into new roles as we go into a new season with not much practice, is pretty awesome to see,” Raider coach Tyler Shaw said. “I hope we continue to practice and work and get better each day, because I think these girls, maybe this opened their eyes and they’ll say ‘oh wow we can do some stuff this is pretty cool.’

“Scottsbluff is a really talented team, and when they’re making shots you’re probably not beating them, but we were able to play good enough defense and rebound the ball to just have a chance at the end and that’s all we were hoping for.”

The game started close as both teams struggled with turnovers and getting their shots to fall as Sidney held a 14-11 lead after the opening quarter. By halftime, the Raiders held a 32-19 lead over the Bearcats.

The key in the game for Sidney was their defense as they held Payton Burda, who broke the school record for 3-pointers made in a game with 10 on Friday, to only two points in the game.

“Payton is…she is a bear on offense, you saw her last night, you covered the game. She was shooting deep 3-pointers and burying them and it was just eye-opening, when she crosses half court she is a threat,” Shaw said. “So we have to bear down and do our best, and I thought Rheagan (Stanley), Kayla (Westby), Ryan (Dillehay), those guys that happened to guard her once in a while did a good job.”

Sidney kept the pressure on Scottsbluff as the Raiders continued to lead 41-23 at the end of the third before winning 51-37.

The Raiders hope to continue the momentum from this tournament into their matchup with the Chase County Longhorns on Friday.

“Friday we play Chase County and they’ve got a six-foot stud on their team and she scored 30 points on us last year so who knows,” Shaw said. “We just have to hope we score more than they do, and know where she’s at at all times, and play good team basketball offensively and defensively.

The Sidney and Scottsbluff boys stayed close from start to finish as the Bearcats came out on top 65-59, winning the Western Conference Tournament.

“A lot of credit to Sidney, they came out and hit us right in the mouth. They hit tough shots, they ran their stuff well, our defensive intensity wasn’t where it needed to be,” Bearcats coach Scott Gullion said. “We were able to scrap back in it, make some big plays, I was really proud of our guys for the fight they had, you’ve got to learn to win in some of these games and we’ve got stuff to look at end of game situation but really proud of our guys, the fight they showed.”

Sidney came out of the gate strong as they led throughout the first quarter, taking the 18-10 lead by the end of the frame. Scottsbluff however, wasn’t going to stay down long and between quarters, Gullion gave his team a goal in the second, cut the lead in half.

“Stop turning the ball over, play better defense, just continue to fight and compete. Our goal was just to cut it in half,” Gullion said. “We were down 18-10, so I said let’s cut it to four and then we were able to take the lead. Credit to our guys for just competing our tails off.”

By halftime, Scottsbluff held a 30-27 lead, shifting the momentum their way. Sidney wouldn’t let Scottsbluff get any substantial lead keeping the game within single digits.

Scottsbluff will play in the Gillette Tournament, which begins Thursday, as they will see teams that haven’t had a chance to play before.

“This is the great thing about Gillette, we get to play all of our levels; sophomore, jayvee, varsity in three days,” Gullion said.. “We’ll learn a lot about our team, not just our varsity, guys are going to be competing for some more playing time and we’ll see a couple teams that we’ve never seen before and Thunder Basin who we don’t get to see all the time so it’s always a fun trip to go out there.”

The Cardinal and Bulldog girls started the day as Chadron went out to a quick lead and led 16-6 after the first quarter.

Gering though would get going in the second on a 12-10 run to end the half to cut the lead to single digits. Chadron wouldn’t let the game stay that way as the Cardinals led 45-33 by the start of the fourth frame and would win the game 51-43.

In the Tigers’ game against the Bulldog boys, Sterling led the game from start to finish.

It took almost the entire first quarter before Gering could score as Sterling held a 15-0 lead until there was 1:48 remaining in the frame. Kaden Bohnsack got the first points of the game for the Bulldogs with a 3-pointer. Both teams scored two more points to put the first quarter score at 17-5.

Gering started the second frame with an 8-2 run but would still be behind 26-19 going into halftime. The Bulldogs cut the Tiger lead to five points, 39-34, by the end of the third quarter but the game would go back to double digits as Sterling got third place with a 56-39 win.

In the girls consolation bracket, Alliance finished fifth with a 46-30 win over Sterling as Mitchell took seventh over Arvada. Mitchell held a 36-0 lead at halftime before going on to win 63-4.

In the boys bracket, Alliance defeated Chadron 61-45 for fifth as Mitchell took seventh with a 71-55 win over Arvada.

Scores from around the area

Check out the scores from around the area, January 14.

Ep. 74 The Showdown: Questions after the 2023 signing day

Scottsbluff’s Nate Kelley goes up for a shot in their Western Conference finals matchup against Sidney.

Sidney’s Kayla Westby and Scottsbluff’s Marly Laucomer fight for possession of the ball during the Western Conference Tournament finals.

Gering's Kaden Bohnsack goes up for a shot between Sterling's Ben Browning (5) and Logan Zwirn (23).