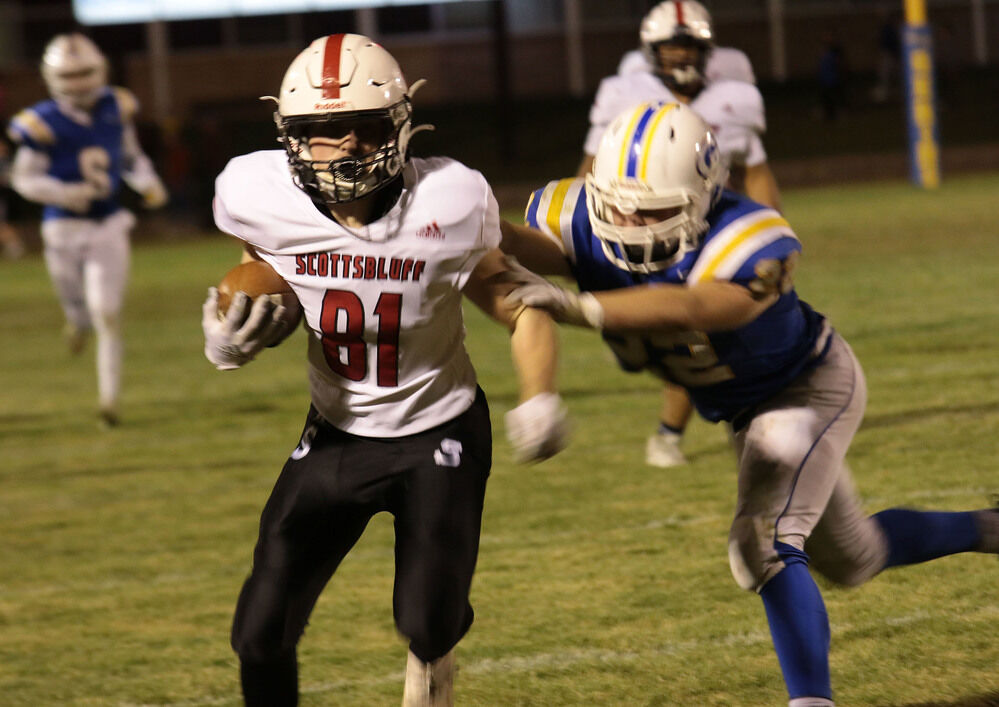 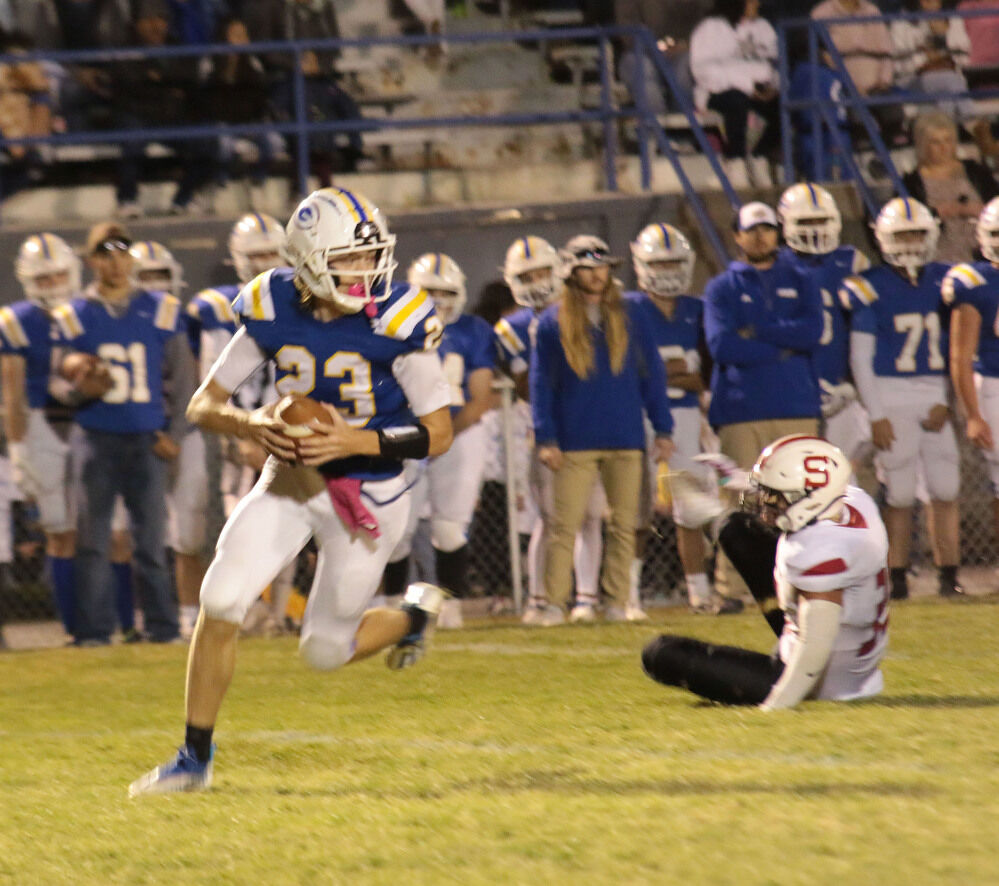 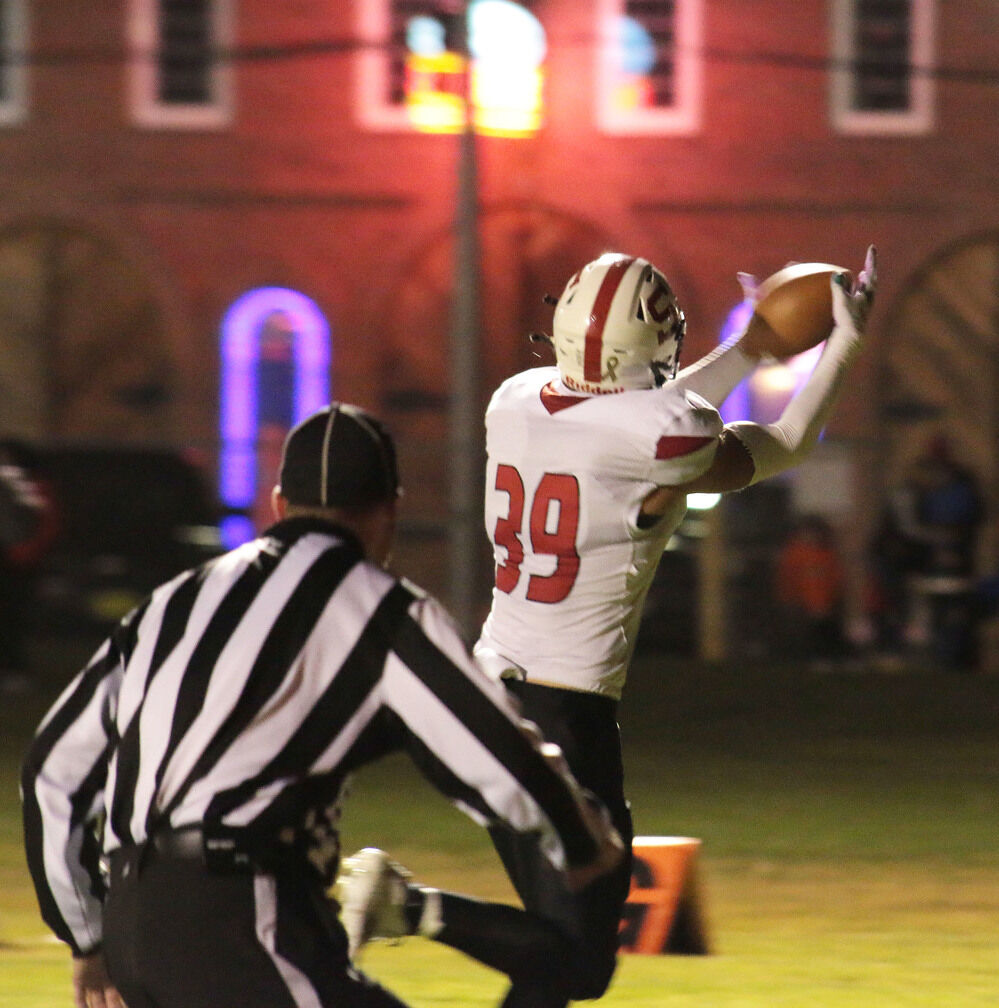 Scottsbluff's Trevor Schwartz hauls in a touchdown from Braden Stull for the Bearcats second touchdown of the night. 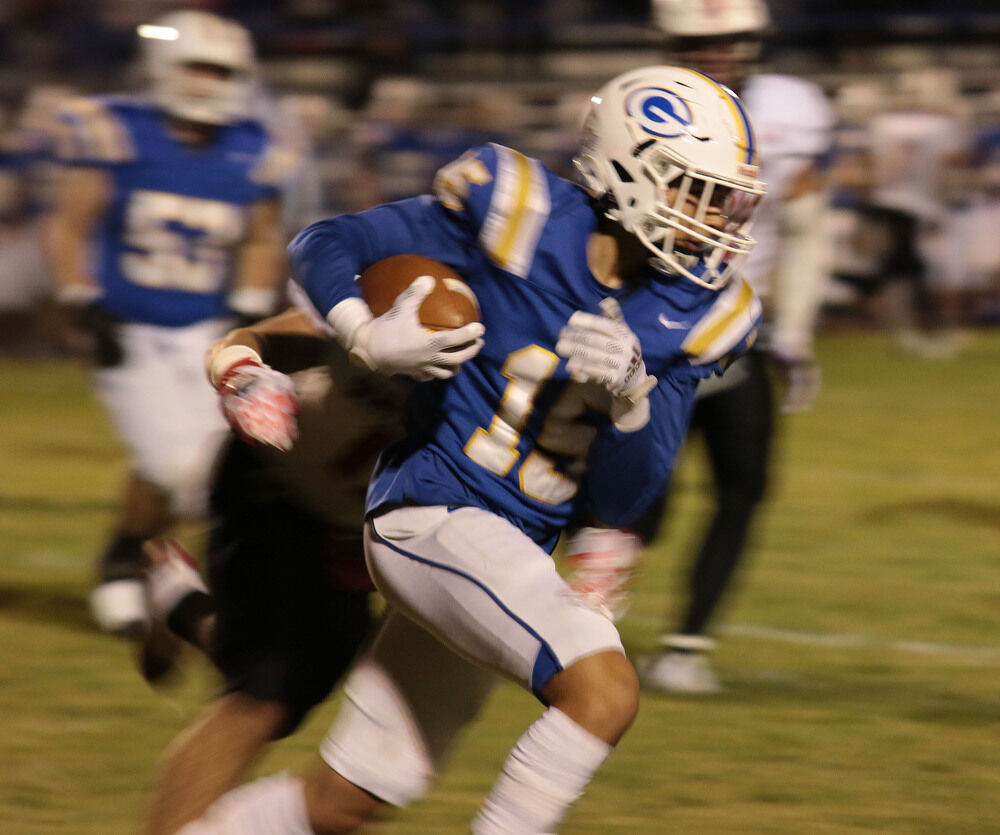 Gering's Tyler Garrett returns a kickoff against the Scottsbluff Bearcats on Friday.

“I feel good about the way our kids performed tonight and the way that we executed,” Scottsbluff head coach Jud Hall said. “We had a few things that we slipped up on that we need to correct but overall, great effort by our kids to come out with a victory tonight.”

With this loss, Gering head coach Danny O’Boyle has mixed emotions as they were downed by 53 points, but proud of what they accomplished for the program this season.

“Obviously, not a good performance physically but what this group of guys has done this year for our program, it’s far more than they’ll ever realize. I’m very proud of them,” O’Boyle said.

Bearcats quarterback Braeden Stull put the first points on the board with a 63-yard run to the endzone during the first minute of the game.

Stull would throw two touchdown passes in the ensuing drives to Trevor Schwartz and Tyson Klein on 15-yard and 32-yard passes, respectively.

After the two touchdowns however, Howard threw a touchdown pass to Kaden Bohnsack from within the 10-yard line to put the Bulldogs on the board.

The Bearcats led 21-7 by the end of the first frame.

Gering would cut the lead to 11 at the start of the second with a field goal from Luis Avila-Sidon but the rest of the half would belong to Scottsbluff.

Stull would run in his second touchdown of the night with an extra point attempt that was no good. Following this, Boyle would run in two of his own with the first seeing a successful two-point conversion from Josiah Mobley.

Tanner Gartner ran a kickoff return into the endzone to put the Bearcats lead to 42-17 but this would be the final time the Bulldogs would score.

Boyle would get his third for the Bearcats, running it in from 80 yards with 11 seconds remaining in the half.

The Bearcats kept running up the score as Stull would run his third in as Scottsbluff kept holding Gering from the redzone.

Tyrone Shanks returned a blocked punt in the fourth and Jackson Ostdiek would put the final tally on the board from five yards out to put the game at its final score.

With this win, Scottsbluff would become B-5 District Champions and continue its season.

“We’ve got to clean up penalties in certain situations,” Hall said. “We can’t allow a late hit on a quarterback, we can’t have holding calls on long touchdown runs, we’ve got to just be cleaner and attempt to play a clean game for four quarters because that’s what it’s going to take to win as we proceed in the season.”

For the 12 seniors on the Bulldogs, this would be their final game on Gering’s football field.

“They are a great group of kids. They’ve battled their butts off the entire way, they bought into us last year as juniors and took it another step this year,” O’Boyle said. “Not going to find a better group of guys.”

The Bulldogs finish the regular season 2-7 while the Bearcats finish 7-2.

Prior to the game, there were about four games that were going to determine the top 11 or 12 seeds in the playoffs.

Next up for Scottsbluff will be playoffs, where the Bearcats will host the Beatrice Orangemen on Friday, Oct. 29.

The Scottsbluff basketball teams finish day one of the Western Conference Tournament with wins while the Mitchell boys drop its first game of the season.

The Bulldogs won the season opener at home against the Cardinals Thursday night.

Both Cardinal basketball teams come out on top over Gering on Thursday during the Western Conference Tournament at Mitchell.

Coach Green leads his team to their 10th NCAA DII Volleyball Tournament of the 13 seasons he has coached at UAA.

Both Sidney Red Raiders teams and Mitchell Tiger girls came away with wins as both the Alliance Bulldogs drop games in day one of the tournament.

Lady Raiders and both Bearcats head to first place game

Scottsbluff's Trevor Schwartz hauls in a touchdown from Braden Stull for the Bearcats second touchdown of the night.

Gering's Tyler Garrett returns a kickoff against the Scottsbluff Bearcats on Friday.