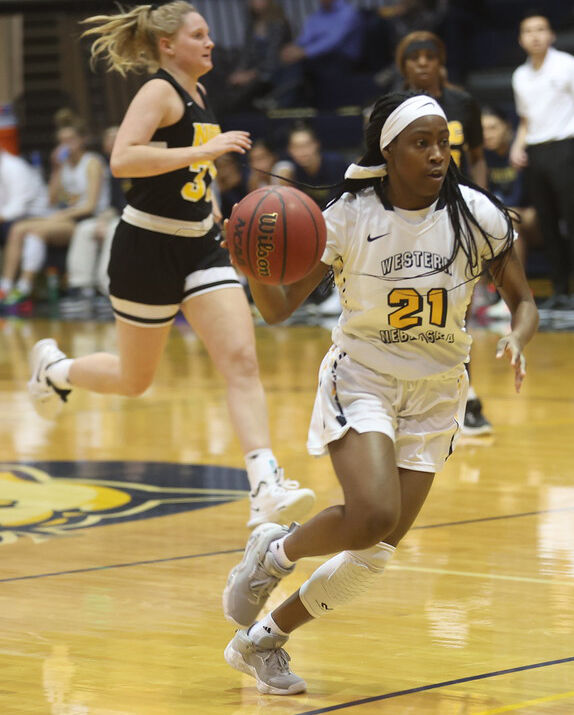 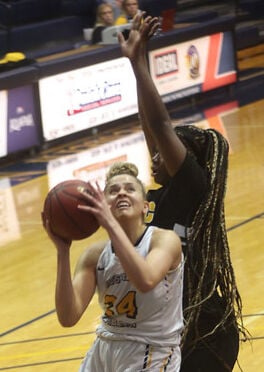 Cougar Payton Fields looks to shoot as a Knight tries to block on Wednesday.

Both teams battled back and forth with plenty of runs, but the Cougars put together an 8-0 run in the fourth quarter behind back-to-back 3-pointers by Shayane Poirot and Ashley Panem to open up the lead and lead the Cougars to a 78-59 win over the Lady Knights in a contest that was much closer than the final score.

“We got the win but I think it wasn’t our best game,” Poirot, a freshman from France, said. “We will keep working.”

WNCC knew this was going to be a challenge against a North Platte team that has been to the national tournament two of the last three years.

“To be honest, we go into every game knowing we have a good game and we know if we have our best game there is no way anyone can beat us,” she said. “We still scouted them and we saw they had good players and they were playing good basketball. We still came and even if we had a bad game, we hit some good shots and found a way to get the win.”

The contest was a battle of two good defensive teams in Region IX and the score after three quarters showed as the two defenses were limiting buckets by both teams.

The first quarter was tight as Sidney’s Janay Brauer hit a 3-pointer to tie the contest at 7-7 for North Platte. WNCC came back to take a 13-9 lead but saw North Platte cut the lead to 13-12. WNCC scored the last six points, including a 3-pointer by Ale’Jah Douglas with the clock running out, to give the Cougars the 19-12 lead after the first quarter.

The second quarter saw North Platte score the first five points on a bucket by Kayla Pope and then another 3-pointer by Brauer to cut the lead to 19-17. WNCC went on an 11-0 run behind threes from Douglas, Panem, and Shanti Henry for a 30-17 lead.

North Platte battled back on a 9-2 run to cut the lead to 32-26 on a 3-pointer by Pope. WNCC’s Amani Brown closed out the half with a trey with a few seconds left for the 35-26 halftime lead.

WNCC opened the fourth on a 7-0 run to lead 60-48. North Platte came back, cutting the lead to 60-54 with 5:50 to play on two free throws by Fumnaya Ijeh. That was when WNCC opened the game with the 8-0 run behind Poirot and Panem’s treys and a Brooks bucket that saw her get two offensive rebounds before putting the ball into the hoop.

WNCC had three players in double figures. Douglas led the way with 16 points with two threes and seven rebounds. Brown finished with 13 points while Panem had 10 points, including three 3-pointers.

WNCC won the rebound battle 49-46 as Douglas had seven followed by Panem and Aminata Zie each with six.

WNCC will have Thanksgiving off before heading up to Casper this weekend for the T-Bird Classic where they will face Western Wyoming Community College on Friday and Casper College on Saturday.

Students from 13 Panhandle schools gathered in Scottsbluff to learn lessons about leadership and how to be the best person they can be.

Cougar Payton Fields looks to shoot as a Knight tries to block on Wednesday.