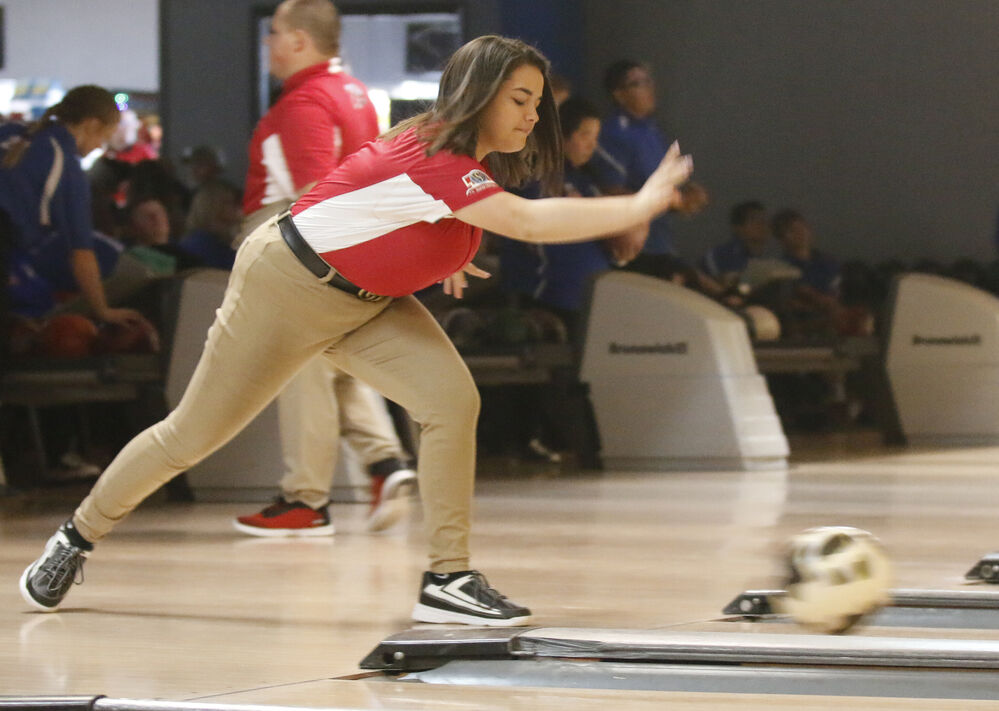 Scottsbluff's Eliyah Lara-Johnson throws the ball down the lane during preliminary play of the Scottsbluff Unified Bowling Varsity tournament. 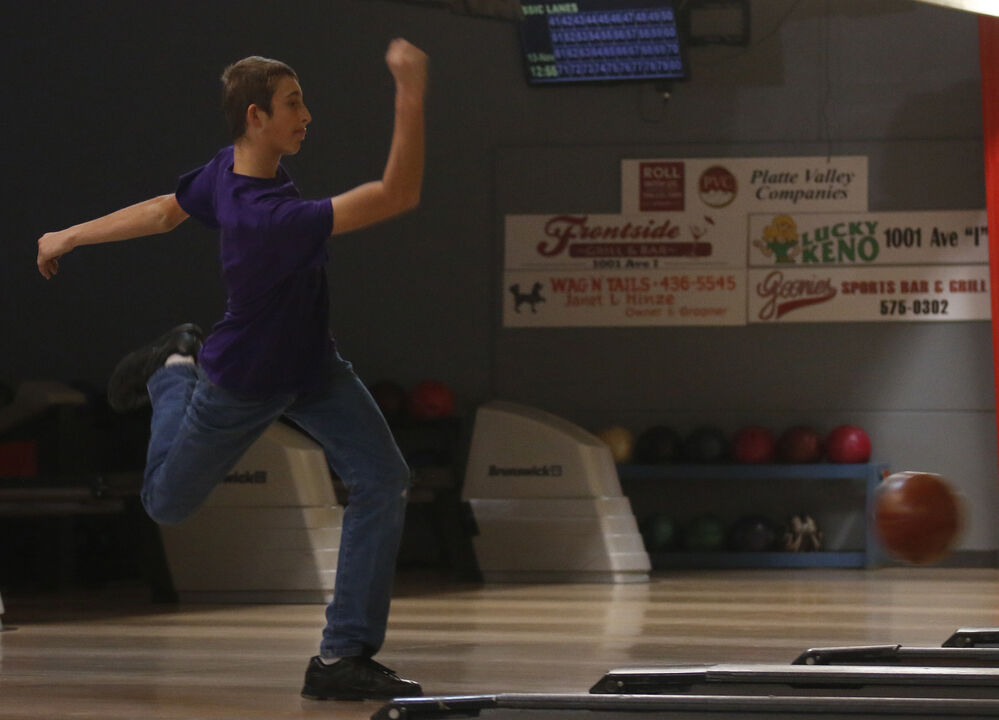 Shaun Teppert follows through after his throw during the final game against the Alliance 2 team. 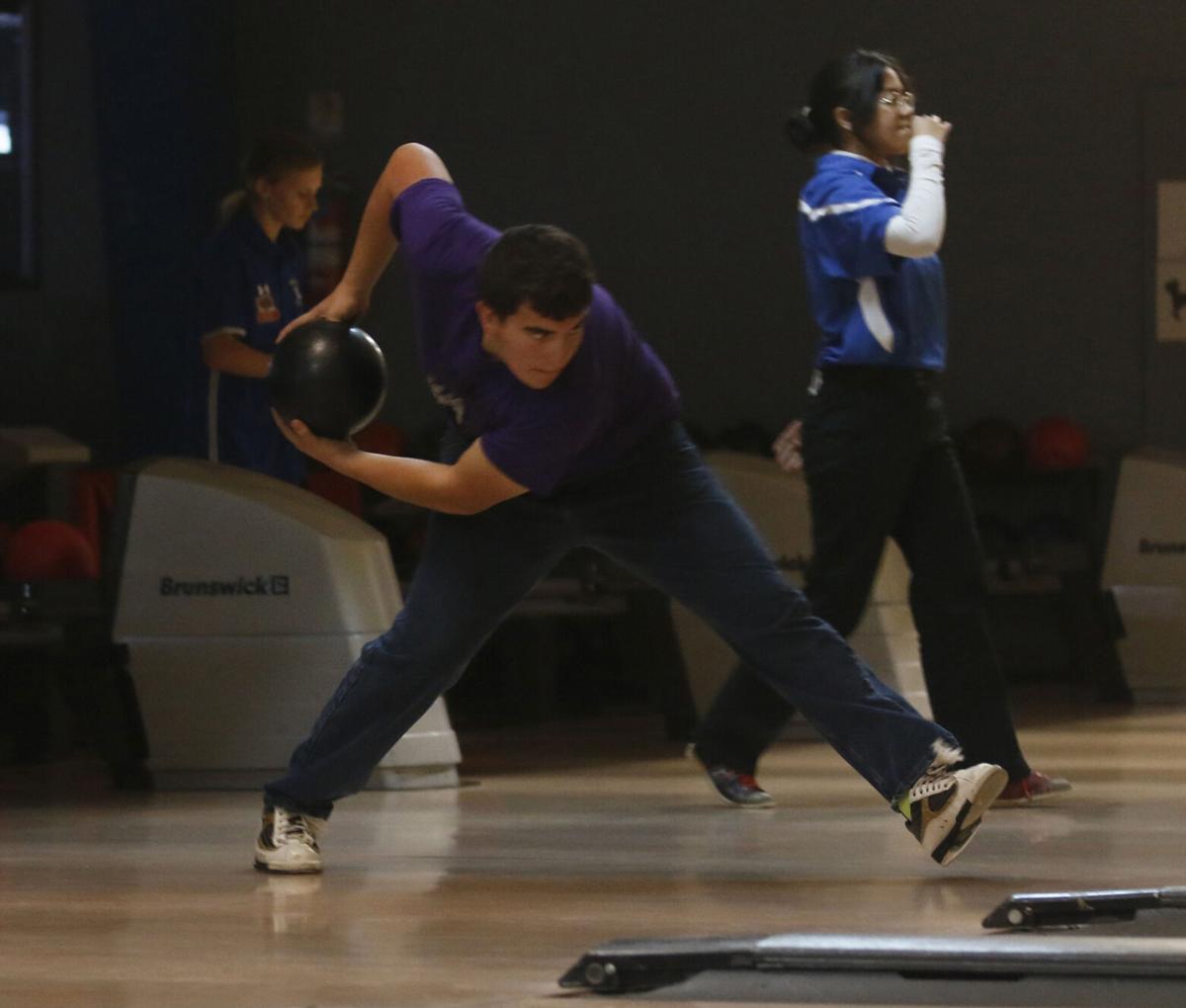 Ryan Barker of Bridgeport throws down a two-handed curve in the Gold Bracket of the Scottsbluff Unified Bowling Varsity Tournament.

The Bridgeport 1 team won the gold bracket comprised of the highest eight scoring teams, with the other teams filling in the silver and bronze brackets.

After preliminary play which consisted of each team playing six games, the teams were organized into brackets by which team had the highest pin fall.

The results from preliminary play ended with the Bridgeport 1 team as the top seed. Throughout the bracket, the Bulldogs beat the North Platte 2 team 126-107, the Gordon-Rushville 1 team 180-82, and finally the Alliance 2 team 124-106.

“Bridgeport rolled really well. We had a few players that were out sick and couldn’t play, but they came back really strong,” Bridgeport coach Erin Reynolds said.

Although Bridgeport was the number one seed in their bracket, the Bulldogs had a rough outing in the opening parts of preliminary play before the initial break.

“It took a little bit for them to get into a groove, but after the break during preliminary games, they were right on,” Reynolds said.

Of the remaining teams, the silver bracket was formed from the lower scoring teams, with the North Platte 3 team being the top seed in that particular bracket.

However, even though North Platte 3 was the top seed in the silver bracket, it was the Gordon-Rushville 4 team that won the bracket as the second seed.

“I think we did pretty good. It’s a lot more pressure this tournament because it’s the biggest tournament we’ve had this year, so a lot more teams. The noise level was up, but overall I think they did great,” Gordon-Rushville coach Melanie Blackcalf said.

“They cheered each other on, they had great sportsmanship and overall, I’m really happy with how everything went.”

Throughout the meet, both coaches lauded the support from within their own team as well as from their fellow competitors.

“I think the support was great, I just think it’s hard when there is so many teams. It gets so loud, everyone’s cheering at the same time and so sometimes, it’s hard for our players to focus,” Blackcalf said. “Other than that, the other teams are all great supporters, they cheer each other on and I really love it. I love the camaraderie of all the teams.”

Unified Bowling’s supporting nature was a great boost for Bridgeport’s moral and was a big part in their first win of the season after coming close several times earlier this season.

“I’m very proud of these kids. Sometimes they don’t have an area at school that they shine in and it really makes me happy that they were able to have support here and were able to shine,” Reynolds said.

Most of the teams will return to action Saturday, Nov. 20 in North Platte.

Scottsbluff's Eliyah Lara-Johnson throws the ball down the lane during preliminary play of the Scottsbluff Unified Bowling Varsity tournament.

Shaun Teppert follows through after his throw during the final game against the Alliance 2 team.

Ryan Barker of Bridgeport throws down a two-handed curve in the Gold Bracket of the Scottsbluff Unified Bowling Varsity Tournament.