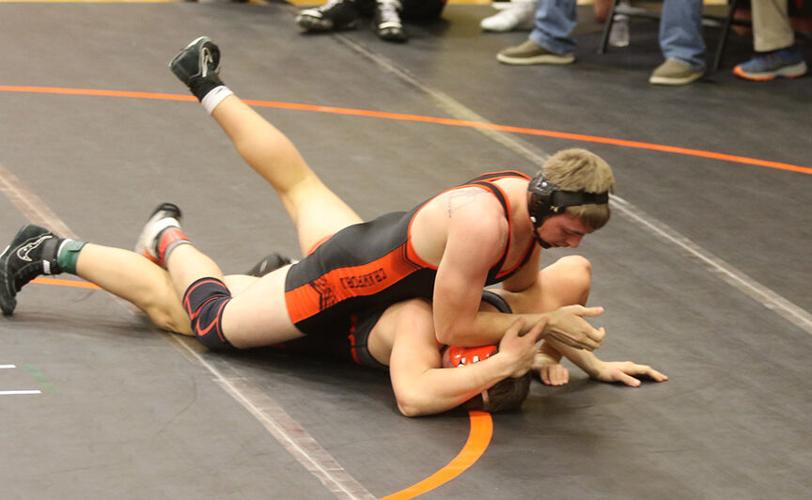 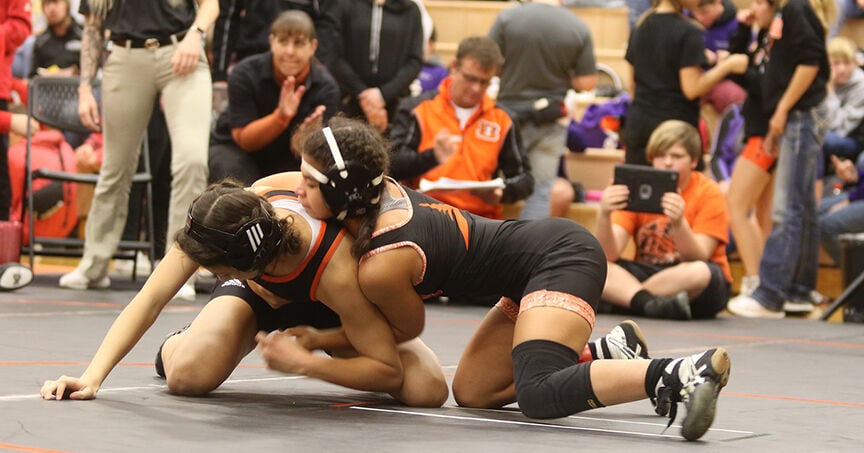 Bayard's Claire McKibbin works for the pin against Ogallala's Kyra Skiles on Saturday. McKibbin would get the pin in 3:31.

IMPERIAL – The Chadron and Sidney girls wrestling teams continue to dominate on the mats as both teams tied for second place at the Chase County Invite on Saturday.

The Cardinals had three individual champions while the Red Raiders had one. Both teams tallied 70 points for second place behind Sandhills’ 96 points. Bridgeport finished fourth with 44 points followed by Ogallala with 35, Garden County with 21, and Bayard with 18.

The Cardinals Fia Rasmussen also won the title at 132 when she pinned Sandhills’ Isabelle Zuniga in 1:02.

Sidney’s Saphira Whitley took third at 185 with a 1-2 record. Garden County’s Abilene Miller finished second with a 2-1 record, including topping Whitley in a pinfall in 4:26 in the second round.

On the boy’s side, Sedgwick County/Fleming ran away with the team title with 152 points. The highest area team was Garden County placing sixth with 76 points. Other local teams saw Kimball place seventh with 64 points, Morrill eighth with 59, Bayard 10th with 51.5, Crawford 11th with 33.5, Leyton 13th with 28, Bridgeport 14th with 27, Banner County 15th with 23, and Minatare 17th with 10.

The boys’ side saw several individual champions and some exciting wrestling in the 17-team field.

The champions on the boy’s side came at 132 when Kimball’s James McGinnis took the title after earning a major decision over Bridgeport’s Chase McGrath 22-10. Morrill’s Gabe Kohel took third in the weight class after earning a pinfall over Ogallala’s Bronson Poppe in 2:37.

The highest local placer at 120 was Morrill’s Nicholos Arroyo, who finished fifth after defeating Kimball’s Cody Brinkman 7-1 in the fifth-place match.

Bayard’s Beau Lake was the highest area finisher at 160 when he took third by pinning Garden County’s Gunner Roberson in 3:34.

Bayard’s Kolby Houchin finished second at 170 after falling to Hitchcock County’s Kolyn Gaston in a pinfall in 3:34 in the championship match. Garden County’s Dallas Miller finished third in the class.

Morrill’s Michael Morgan finished second in the 195-weight class with a 3-1 record. His only defeat came to champion Keegan Shuler of Hitchcock County.

Class A and B teams conclude their seasons at the second day of state track and field, with the Sidney Red Raider boys winning the highly contested Class B title.

Panhandle Prep announced the rosters for the All-Star basketball game on Wednesday. Check out the names of those who will be playing on May 27 at Gering High School.

The first day of state track and field commences with several local athletes placing or qualifying for the second day.

Peters leads Tigers back to state in Class C

Red Raider John Beier won the individual title at districts while Scottsbluff won as a team on Monday, qualifying for state.

Scottsbluff football to hold youth camp, other camps on tab as well

The Scottsbluff Bearcats coaching staffs prepares to host a multitude of camps for different sports.

Bearcat Jason Escamilla will continue his soccer career with the WNCC Cougars next year.

Local tennis teams fell in the first and second rounds at the state tournament on Thursday, ending their season.

Athletes and coaches from around the area prepare for the state track meet in Omaha.

Scottsbluff football to hold youth camp, other camps on tab as well

Bayard's Claire McKibbin works for the pin against Ogallala's Kyra Skiles on Saturday. McKibbin would get the pin in 3:31.