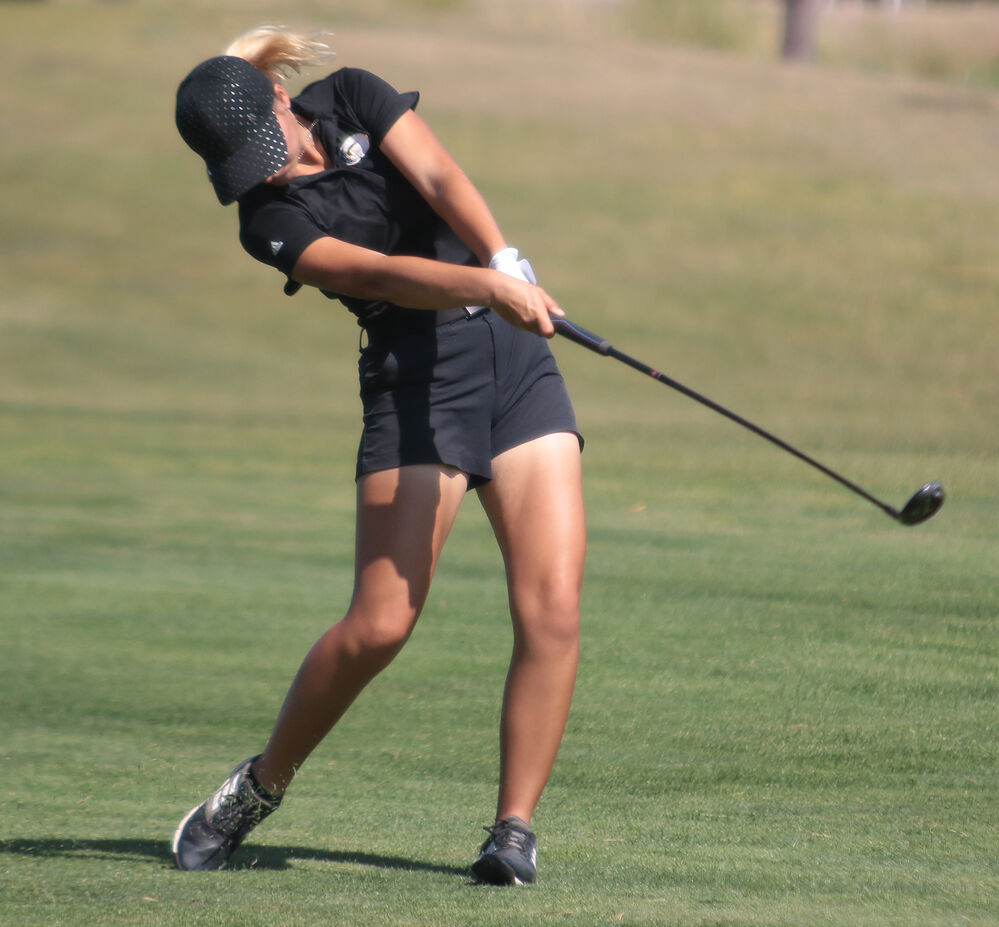 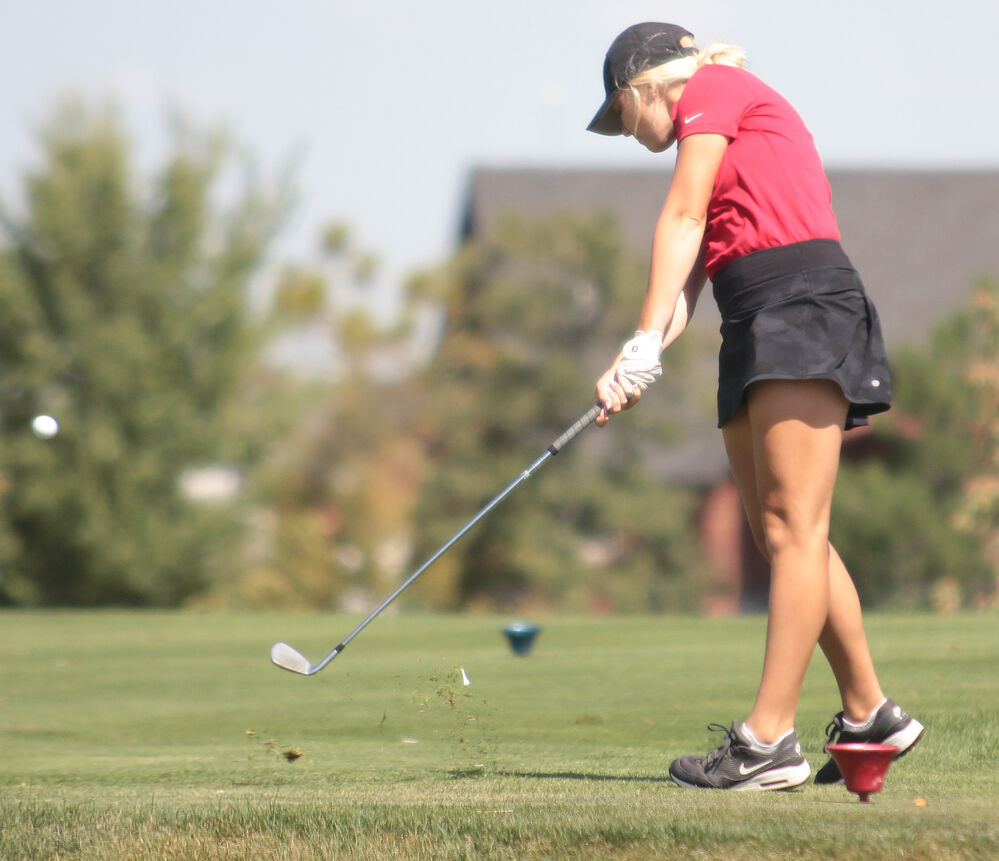 Scottsbluff's Anna Kelley tees off at hole 13 during the Gering Invite on Tuesday.

Emily Krzyzanowski won her fifth straight individual title at the Gering Invite on Tuesday, scoring her personal best, 69, for the second straight week.

“I feel pretty good, I just want to try and keep the streak going,” Kryzyanowski said about winning her fifth straight. “Since I got a 69, I feel more comfortable being under par now.”

During the Lexington Invite on Friday, Sept. 10, Krzyzanowski and Scottsbluff’s Anna Kelley finished in a tie for first with a score of 69. This would also be Kelley’s personal high school best.

To beat that tie, they would go into a playoff hole where Krzyzanowski would ultimately win.

“I went first off the tee, hit it right into the trees and then chipped out,” Krzyzanowski said. “I was blocked by the trees again, chipped out from there and got on the green. I was able to one-putt it in to birdie. Anna then drove the ball, barely keeping it in the rough on the left side. Her second shot was right in the green and then chipped before two-putting it in for a par.”

With this invite being at Monument Shadows, Gering’s home course, Krzyzanowski said she was expecting to tee off from where they normally do.

“I wasn’t expecting to play all the holes from the red tees because, normally, we play a little farther back for this,” she said.

Krzyzanowski feels there is always room to improve. What she believes she needs to improve on were things that she struggled with during the invite.

“Putting five footers, at the most,” she said. “Those are what I struggle with a little bit as well as hitting straight because some of the holes I didn't.”

One of those happened to be hole 17, where she drove the ball into the bunker and scored her only bogey.

“I was just worried that when I hit it in (the bunker), that I would just be able to get bogey at the most,” she said.

Scottsbluff would win the team title, scoring 30 strokes less than second place Mitchell. Bearcats head coach Brock Ehler said he felt his team played great in the invite and enjoy being able to play with each other.

“I think we’re getting better at the game of golf. We made some mental mistakes early, some of that is on the kids and some of that is on the coaches, but they played well,” Ehler said. “They’re still having fun, they collaborate well at the end, they’re sitting together, they’re talking about the game and what they could’ve done better, so they believe in themselves, too. That’s what we want to see, smiles and self-confidence.”

Nielli Heinold would beat out teammate Kelley by one for second in the individual standings.

“She’s been playing really well. She just needed to learn how to manage and do some things. She’s worked really hard on her game and she’s doing great,” Ehler said. “We expect her to continue to play well for the next couple years. She loves the game, she’s fun to have on the team. Anna and (Nielli) are fantastic leaders; they set the example and the bar for our team and also the excitement and fun.”

Before their next invite on Thursday, Ehler believes that there is something that all of his team could improve on.

“There are so many different things and there’s so much that you’re not able to practice on the range. I always jot down a few notes all the time and I really prioritize,” he said. “I get a kid, take them and try to help them put the puzzle together. I prioritize what they need to do to make that happen. Hopefully, we’ll make a good practice schedule and the coaches will get it right and if we don’t, we’ll do our best to fix it from there and try to find something positive.”

Scottsbluff will be at the North Platte Invite Sept. 16 before joining Gering at the Ogallala Invite on Sept. 21.

Scottsbluff's Anna Kelley tees off at hole 13 during the Gering Invite on Tuesday.