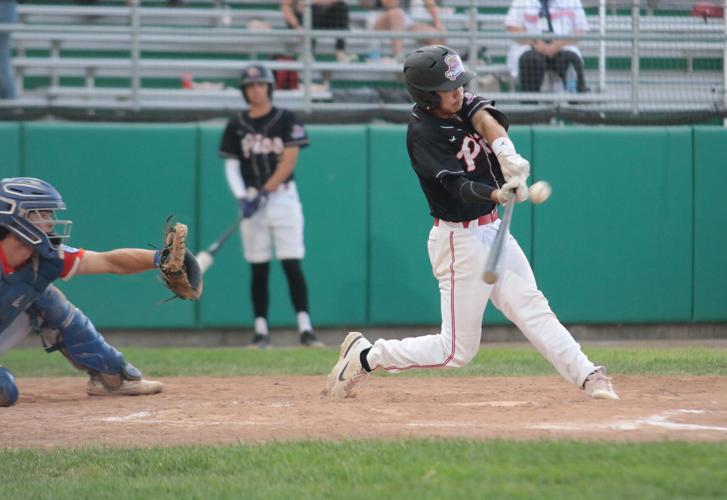 Stevie Hom makes contact as he hits his first double of three against Fremont in Tuesday’s playoff game. 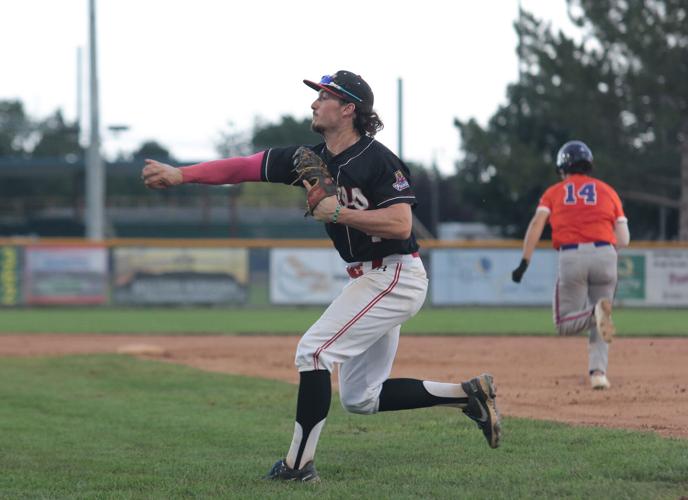 Tyler Mead makes a play from first base to get the lead runner out at home during the win on Tuesday.

For the first time since 2019, the Western Nebraska Pioneers are headed to the championship series following an 11-5 win over the Fremont Moo on Tuesday in game three of the divisional series.

“Just unbelievably proud of our guys, they earned it, they deserved it,” head coach Antonio Garcia said. “Against a great team, really well managed team and it was awesome to come home and win two to get us ready for the championship series. They worked so hard all summer and I am ready to see them go out and compete.”

The players are excited to get this win for not only Garcia but for the fans as well.

“It feels really good. I’ve been wanting to play a lot better in the Pios uniform and getting the opportunity to do it during playoffs means a lot more because I know we’re playing for Skip (Garcia),” Stevie Hom said. “Skip really wants to do this for the town and the fans. We want to bring a championship back here to Gering.”

Ryan Callahan singles in Alex Zerfass for a 1-0 at the end of the first inning. Zerfass got on base through a walk and advanced to second on a Declan Wiesner fielder’s choice.

Fremont loaded the bases in the top of the second with no outs. A hard grounder to Tyler Mead thrown to Wiesner at home got the first out. A strikeout by pitcher Gunnar Nartker, which resulted in an ejection on the batter, and an unassisted play by Mead at first ended the inning with no runs coming across.

The Pioneers went up 2-0 when Hom scored on an Eric Smelko sacrifice fly in the second.

The Moo cut the lead in half with a solo home run by Derian Morphew. It didn’t take long for the Pioneers to get that run back and more as Wiesner reached base on an error. Wiesner came in on a Ryan Callahan 2-run home run in the bottom of the third.

Hom hit his second double of the game in the fourth inning and then a bunt from Antonio Nanez moved Hom over. On the play, the pitcher under threw the ball to third, resulting in Hom scoring for a 5-1 lead.

After a Zerfass intentional walk, Nanez scored on a passed ball and on an error by the shortstop, Smelko and Zerfass scored. A single by Mead brought in Callahan for a 9-1 Pioneer lead going into the fifth inning.

The Moo scored two in the top of the sixth inning. The first run came on an Austin Baskin single while second scored on a Morphew sacrifice fly to center field.

The top of the seventh saw the Moo load the bases and an error at second on a hard ground ball scored one. A second run scored on an infield single to cut the lead to 9-5.

Two more Pioneer runs came in during the bottom of the eighth on Hom's third double of the game.

Hom went 4-for-5 with two runs and one RBI to lead the team offensively. The energy on Tuesday was different at home versus in Fremont on Sunday.

“The energy was a huge thing. When we played in Fremont, we didn’t have the most energy so when we came back here in front of the people, I feel like guys were able to feed off of each other more and it showed,” Hom said.

The Pioneers will continue on into the championship series against the Spearfish Sasquatch on Thursday, Aug. 4. The first game will be in Spearfish before returning to Gering for game two on Saturday, Aug. 6.

“We’ll be up there and then back here for two. They need to come in ready to play, (Spearfish) is a different team than we played two weeks ago,” Garcia said. “Playoffs are different. They’re going to come hungry so our guys need to be hungry as well.”

Nine teams competed in the third annual Team Ashtyn Volleyball tournament that was held at the Weborg Centre grass courts on Sunday.

The Western Nebraska Pioneers played 15 innings in a game that lasted over five hours on Thursday, coming out with the win to take a 1-0 in the championship series.

WNCC women much improved this season

After winning two games last year, the WNCC women’s soccer team is looking for more wins with a talented team of returners and newcomers.

Gering tennis still without a home, new tennis courts will be ready mid-September

The Gering tennis team will begin the season practicing at Scottsbluff as they await the completion of their courts.

On Monday, the Western Nebraska Pioneers named Brandon Nelson as the team's new head coach for the 2023 Independence League season.

The Cougars men's soccer team began practice on Tuesday as they look to improve upon their record from last year.

(Disc) Golfing for a cause

On Thursday, July 28, members of the Oregon Trail Park Disc Golf Club along with newcomers, played a round to raise money for Dairy Queen's Miracle Treat Day.

The Cougars volleyball team opened practice on Tuesday as the players look to complete their goal during the season.

The WESTCO teams had different results in their respective area tournaments on Saturday, with Zephyrs winning and Express falling

Gering tennis still without a home, new tennis courts will be ready mid-September

Stevie Hom makes contact as he hits his first double of three against Fremont in Tuesday’s playoff game.

Tyler Mead makes a play from first base to get the lead runner out at home during the win on Tuesday.