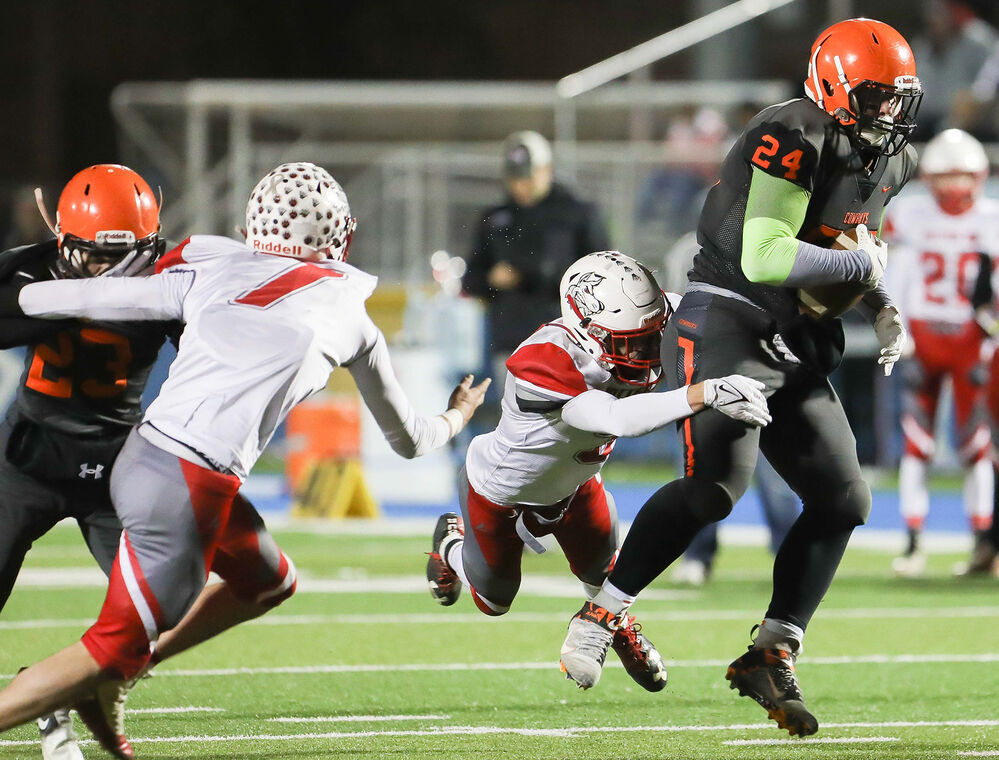 Coyote Thomas Muldoon get his arms around Cowboy Tucker Ravenscroft as Coyote teammate Luke Kasten comes over to help. 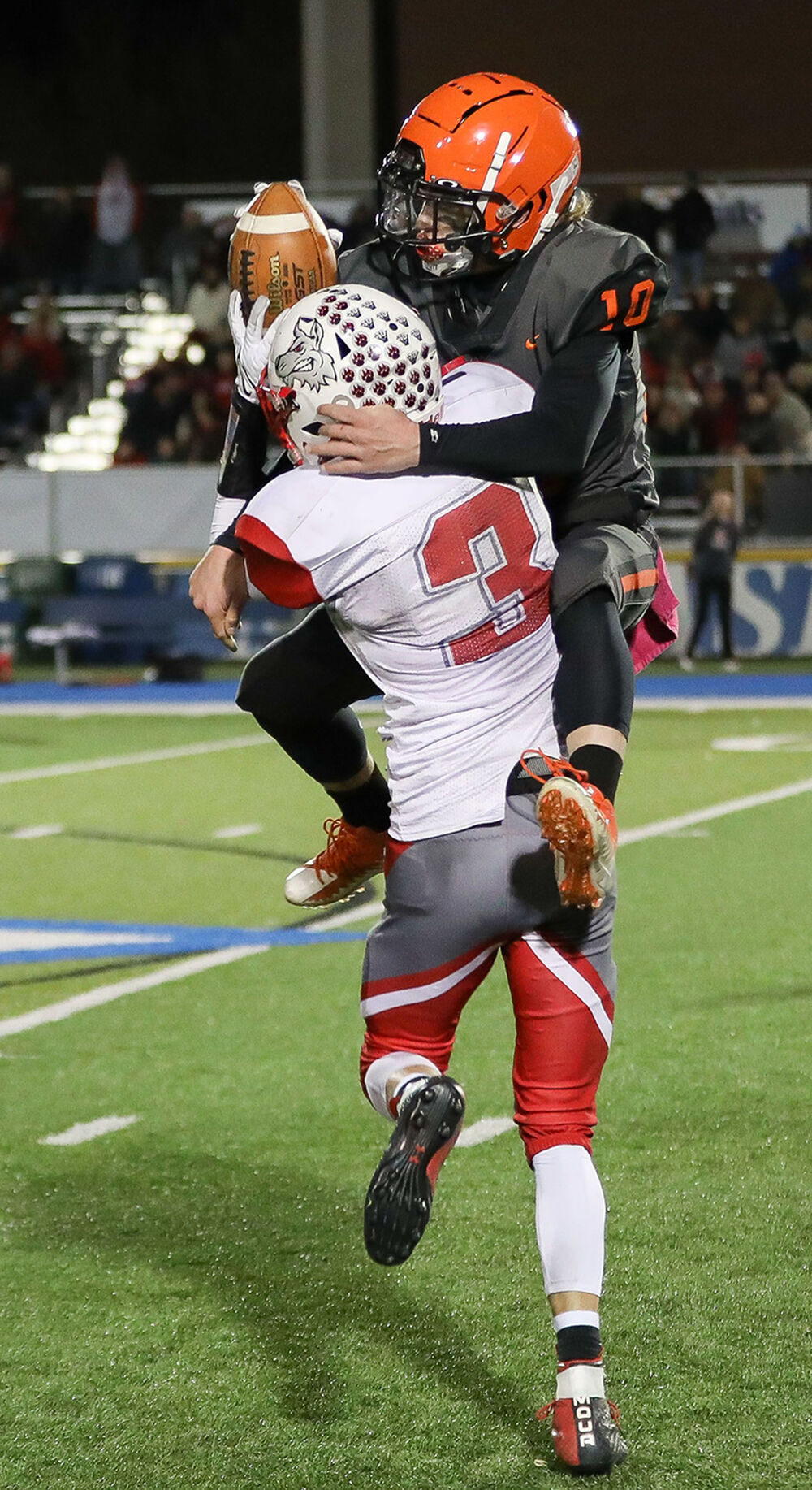 Potter-Dix's Thomas Muldoon catches the ball as Cody-Kilgore's Cooper Fay tries to knock the ball out.

The Cody-Kilgore Cowboys defeated the Potter-Dix Coyotes 65-37 to become the Class D-6 champions on Friday.

Both teams came into the game undefeated and fighting for their first state title. To get to the championship, the Cowboys defeated Stuart 55-19, Arthur County 51-6, and Wallace 72-28. The Coyotes downed Sioux County 54-0, Parkview Christian 70-34, and Spalding Academy 39-38.

“We got off to a good start. We got a stop on defense to start the game and then we were to go down and score and take the lead real early, then we exchanged scores with them a little after that,” Frerichs said. “In the third quarter, we turned a couple of times and kind of got away from us.”

The Coyotes put the first points on the board with a 49-yard run by Luke Kasten but less than a minute later, the Cowboys got their first tally on a Peyton Sterkel run.

With 5:29 in the first, Coyote Brayden Kasten was picked off by Dylan Naslund, and Cowboy Gage Davis caught a pass from Cooper Fay to go up 13-8.

The final score of the first quarter for Potter-Dix was a pass from Brayden Kasten to Zach Rotert with a 16-13 lead.

Sterkel ran it into the end zone with three seconds remaining in the frame to put the Cowboys up 21-16.

The only scoring play of the second quarter was a Davis run with 53 seconds left in the half to put Cody-Kilgore up 29-16.

Luke Kasten threw an interception to Cowboy Fay with 13 seconds left. This was the second interception of the half.

The first drive of the second half saw the second interception from Brayden Kasten to Sterkel. The Cowboys would score eight plays later on a Sterkel run, his third of the game.

Davis got the final score of the quarter for Cody-Kilgore on a 20-yard run to go up 45-16.

The Coyotes would get on the board for the first time in the second half with 1:04 remaining in the frame on a pass from Luke Kasten to Thomas Muldoon.

The Coyotes were down 45-24 to end the third quarter.

During the first drive of the final frame, Sterkel got his fourth of the game on a 9-yard run to put the Cowboys up 51-24.

Sterkel recovered a fumble on the kickoff by Coyote Ben Johnson to go up 57-24.

Cousins Brayden and Luke Kasten connected for a 23-yard touchdown pass from Brayden on the first offensive drive of the fourth quarter for the Coyotes to cut the Cowboy lead to 57-30.

Sterkel ran it in from four yards out to put the Cowboys up 65-30.

With just under two minutes left, Luke Kasten connected to Muldoon for a 15-yard touchdown to give Potter-Dix the final score of the game.

Muldoon led all Coyotes in receiving with 117 yards on eight carries and two touchdowns. Brayden Kasten finished the game 11-for-17 with 141 yards, two touchdowns and two interceptions. Luke Kasten led the team on the ground with 53 yards on six carries while also leading on defense with 17 tackles.

This was a season to remember for Muldoon, Niko Koon, and Jared Anton, who are the three seniors on the team.

Penalties were an issue for both teams as the Coyotes had six penalties for 36 yards while the Cowboys had eight penalties for 56 yards.

“I was pretty pleased with how we did. We had a couple of procedure penalties, which was a delay of game and a false start,” Frerichs said. “We did have one facemask but we didn’t have any big back-breaking penalties. I thought the kids did a good job as far as that goes.”

The Cowboys finish the season 12-0 while the Coyotes finish 11-1.

“I couldn’t be more proud of these kids,” Frerichs said. “They did a great job, did everything we asked them to, we just came up short in the last one.”

Coyote Thomas Muldoon get his arms around Cowboy Tucker Ravenscroft as Coyote teammate Luke Kasten comes over to help.

Potter-Dix's Thomas Muldoon catches the ball as Cody-Kilgore's Cooper Fay tries to knock the ball out.