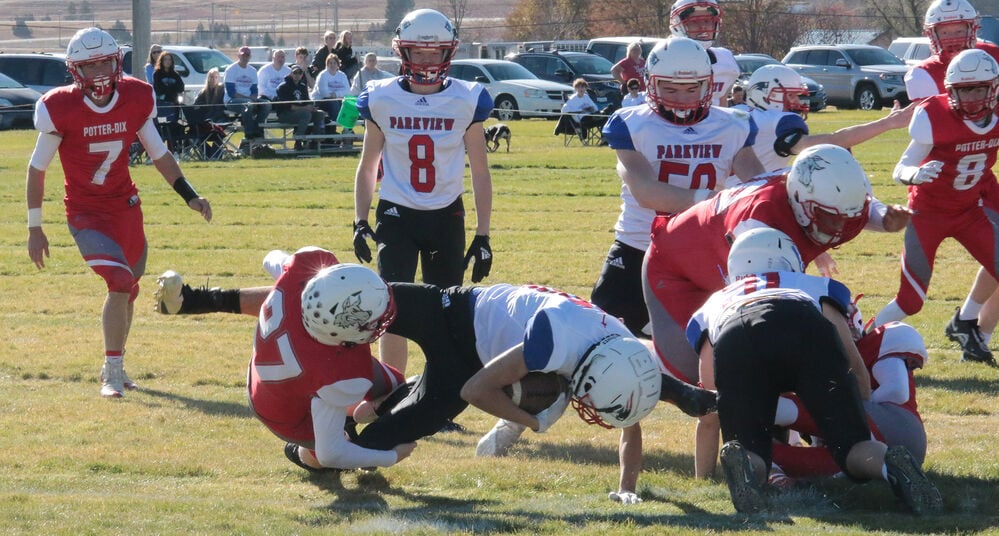 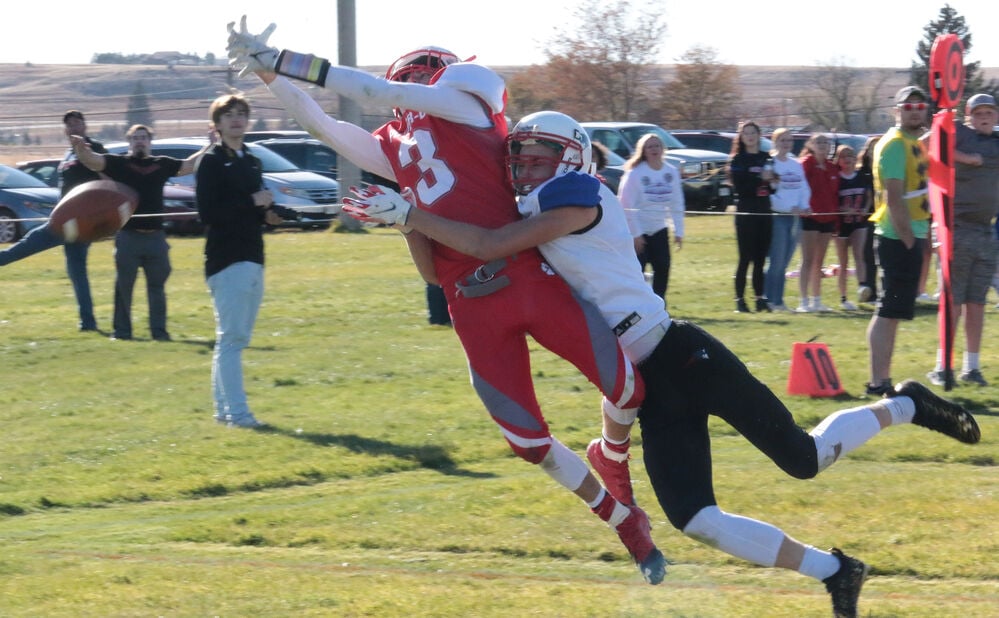 The ball slips past Thomas Muldoon (3) as Patriot Brayden Ulrich gets the tackle on Nov. 5.

The Potter-Dix Coyotes will head to their first Class D6 championship game in Kearney after downing the Spalding Academy Shamrocks 39-38 on the road.

“It’s a pretty big deal, it means a lot,” head coach Dale Frerichs said. “Our football program has done some pretty cool things in the past, making the quarterfinals several times but in order to make a semifinal, come out victorious, make a state final and have a chance to win a state title, it’s pretty historic.”

This means so much to not only the school, but to Frerichs as well after coaching for so long.

“I’ve been doing this for 15 years or so and all the work you put in and some of the years when you struggle, can’t break into the win column and then to finally be able to break through and have this is awesome,” he said. It’s a testament to my assistants and to the kids.”

The Coyotes held the Shamrocks scoreless in the first quarter while scoring three touchdowns of their own.

Jared Anton scored the first two, the first less than 30 seconds into game on a 5-yard run and the second a minute later on a 70-yard scoop and run after Luke Kasten forced a Shamrock fumble.

Thomas Muldoon recovered an onside kick after the ball hit a Shamrock and with 6:40 remaining in the frame, Kasten ran the ball into the end zone to increase the Coyote lead 19-0.

Brayden Kasten caught an interception for the second Shamrock turnover of the quarter, but the Coyotes were unable to do anything with the possession.

The score going into the second quarter would see Potter-Dix lead 19-0.

Luke Kasten started the frame passing to Muldoon for a touchdown before Shamrock Izek Leslie had a reception for the first touchdown of the game for the home team.

This was the only score of the half for Spalding Academy but Potter-Dix wasn’t done as Muldoon caught a pass from Brayden Kasten to end the first half scoring.

The third quarter started like the first, except the other way around. Potter-Dix would be unable to get into the end zone while Spalding Academy scored twice.

Less than a minute into the half, Daniel Diessner ran the ball in to cut the Coyote lead to 31-16. Dawson Murphy passed to Luke Leslie for the final score in the frame.

“Their coaches made some adjustments that we had a tough time adjusting to,” Frerichs said. “We finally made a couple of adjustments on that final scoring drive that we had and were able to get that nine point lead, which was the difference in the game.”

Down 31-24 in the fourth quarter, the Shamrocks put the game within one on a Murphy run with 9:07 left in the game.

Anton ran it in from two yards out to extend the lead. The Coyotes would make only their second extra point in the game to go up 39-30.

The Shamrocks got one more score on a pass from Murphy to Braden Leslie but it wasn’t enough as the Coyotes would win the game 39-38.

“When you make it this far, you’ve got to say it’s a good performance when you win,” Frerichs said. “We talked about it before the game as a team that with the weather conditions and everything else, it was basically a day where you just had to find a way.”

Spalding Academy finishes its season 9-2 while Potter-Dix improves to 11-0.

The Coyotes will face the Cody-Kilgore Cowboys, who defeated them last year 42-8 in the quarterfinals. The Cowboys defeated the Wallace Wildcats 72-28 to advance to the championship final.

“The kids were pretty disappointed with the final outcome of that game. We felt like we had a couple of chances early to change the momentum and we weren’t able to do that,” Frerichs said about last year’s matchup. “The kids have been looking forward to being able to get a rematch with them so we’re pretty excited.”

The two will face off on Nov. 19 in Cope Stadium at the University of Nebraska-Kearney. Kickoff is set for 6 p.m.

The ball slips past Thomas Muldoon (3) as Patriot Brayden Ulrich gets the tackle on Nov. 5.