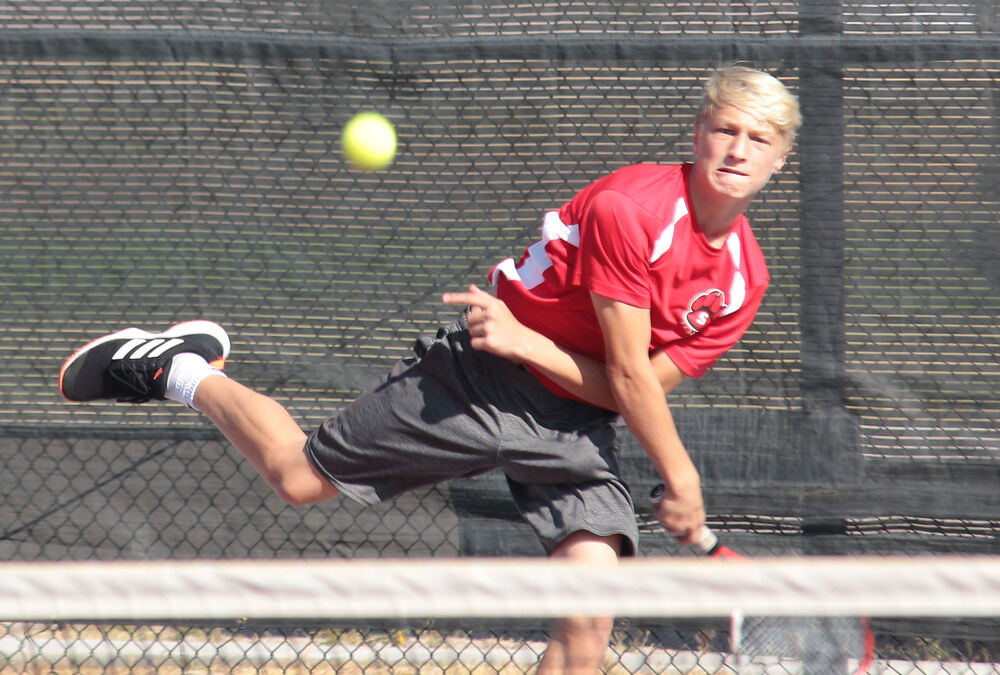 Kian Blomstedt on a serve during his singles match against Alliance on Saturday. 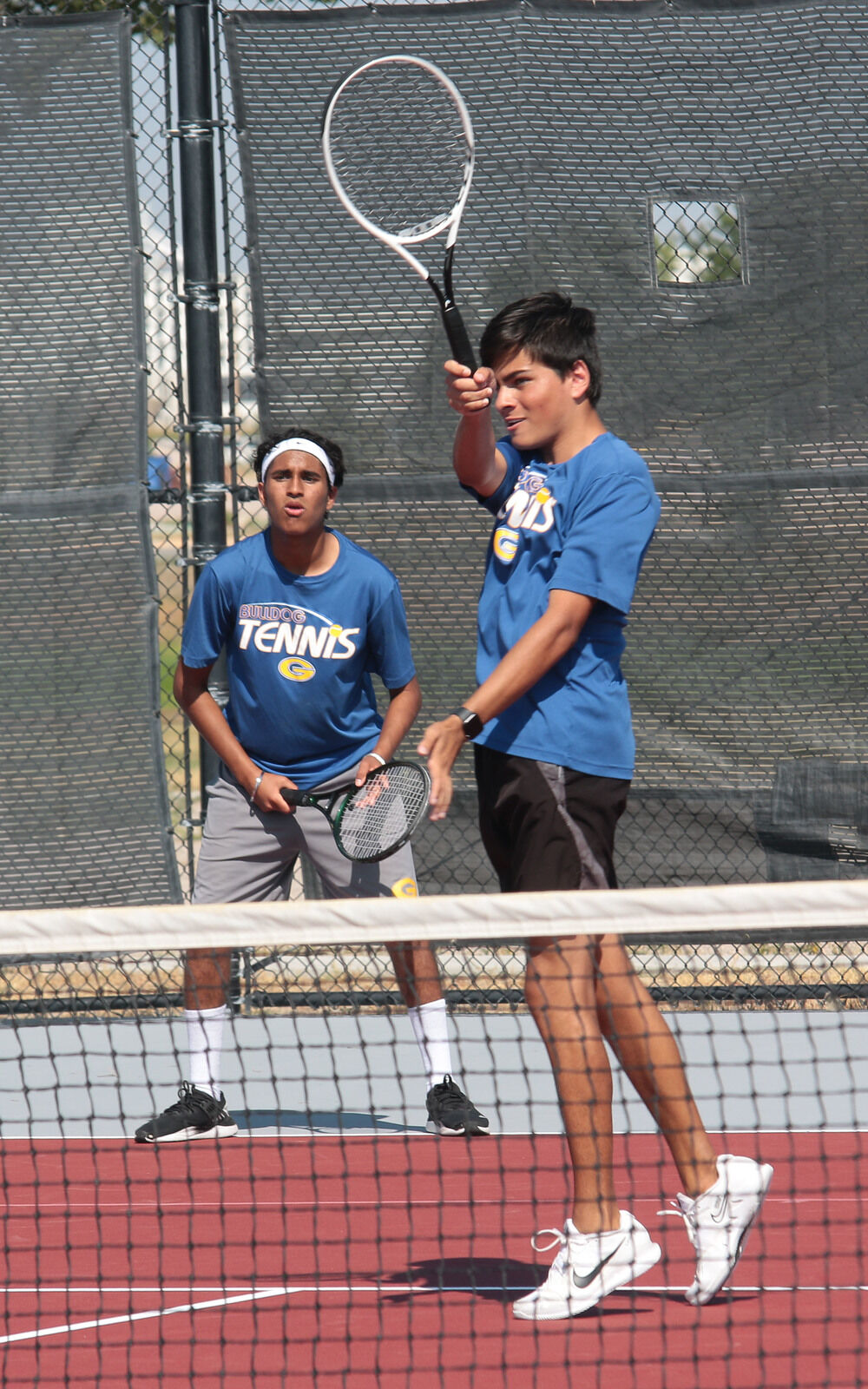 Doubles pair David Karpf and Gurnoor Hayer play against a pair of doubles from Alliance on Saturday in Scottsbluff. 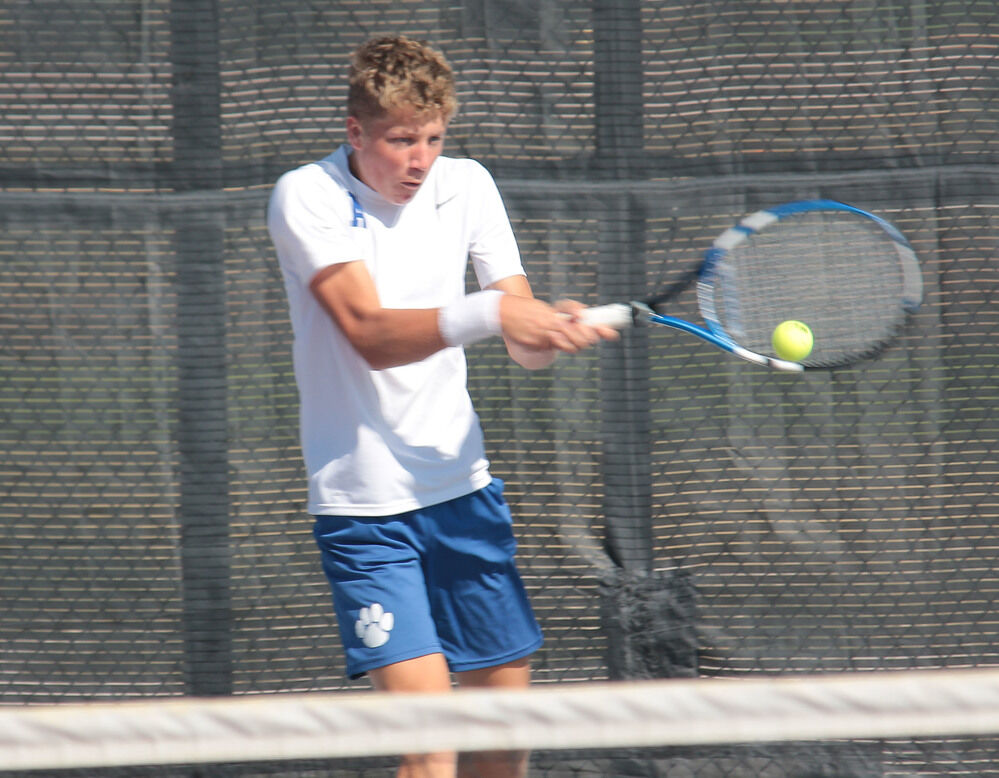 Alliance's Kysen Walker backhands it to his opponent in his singles match against Scottsbluff during the triangular.

On Saturday, Sept. 18, Scottsbluff hosted duals with the nearby Bulldogs from both Gering and Alliance.

The morning began with Alliance taking on the host Bearcats. Alliance beat Scottsbluff, 5-4.

Alliance head coach Scott Mills said that his team had a very slow start and the players attribute that to the invite that took place on Sept. 16. Aside from the slow start, they were able to play OK against the Bearcats.

“We just came off our tournament up in Lexington, where we got a lot of matches in and the kids are still claiming they’re sore,” he said. “Overall, I think they came back and played pretty decently. They were consistent, which is what we need at this point.”

Scottsbluff was able to give some of their athletes the day off as they let other varsity players get the match experience that they’ll need closer to the end of the season.

“Today was a little bit of a different challenge because we are at that point in the season where we’re trying to settle our lineups for the end of the year,” head coach Darren Emerick said. “We took some of our other varsity players, who haven’t played as much, we moved them up today to give them a chance to get some playing time in. Four of our regular varsity players sat today to give the other guys a chance to compete.”

During the singles match between Alliance’s Kysen Walker and Scottsbluff’s Kian Blomstedt, Walker was getting frustrated, putting more pressure on himself and getting even more into his head than needed which in turn, creates mistakes.

“I haven’t really had a whole lot of problems with that this season, this is probably the first time that he’s had that issue,” said Mills. “He’s worrying about going to college right now. He’s just a junior but he’s thinking about going to college to play tennis. He’s trying to do everything right and he puts that pressure on himself. Instead of just playing tennis, he tries too hard to be ready for the next level already and that takes time.”

Alliance would immediately go into their matches against Gering as the host Bearcats take a break.

Alliance would win 7-5, taking four in singles and three in doubles. Gering head coach Ron Swank was proud of how his team played in this matchup.

“My veterans played pretty well and my new ones are coming along, we’re a team of newbies,” Swank said. “They’re playing up to their potential so that’s all we can really ask at this point; we’re just building this year.”

Gering would have the third match of the day against Scottsbluff, losing to the host, 9-3. Gering won two in singles and one in doubles.

Alliance will have their next match in Kearney on Thursday, Sept. 23 before joining Scottsbluff at the Hastings Invite the following day.

Alliance will work on their in-game mechanics before they head to Kearney.

“From what I’ve seen today, we are going to work on more lobs and trying not to force the shot as much,” said Mills.

Scottsbluff will focus on setting their lineups as the season starts to get closer to playoffs.

“It just comes down to lineups this time of year and we are just trying to get things settled. You want your doubles to be settled before you get to GNAC and state, so that’s our biggest challenge right now,” Emerick said. “I think that we are probably settled at No. 2 doubles and I think that we’re going to shift a few players around to kind of experiment with two singles positions and No. 1 doubles.”

Gering will have over a week off and will have their next match when they host Alliance and Scottsbluff at the Scottsbluff tennis courts.

“We’ll play in a slightly different format since I’m hosting it,” Swank said. “We’ll do the state format on that and that’s two out of three sets.”

With the amount of time until their next match, Swank will mostly work with his team on one part of their game.

“We’re going to hit doubles really hard next week. I’ll have a week off and we’re going to set the doubles teams. Our singles players are established and our doubles are our new people, so court positioning and basics.”

Kian Blomstedt on a serve during his singles match against Alliance on Saturday.

Doubles pair David Karpf and Gurnoor Hayer play against a pair of doubles from Alliance on Saturday in Scottsbluff.

Alliance's Kysen Walker backhands it to his opponent in his singles match against Scottsbluff during the triangular.